A cold walk with Barley this morning Logan.

Frost here too and -1C when I set off to the supermarkets; I've just returned in a sweltering 3C.

The mower I mentioned in a previous post is now fully sorted; the symptoms definitely looked like fuel starvation and with dozens of YouTube videos all saying the same my chum David spent ages even to the point of buying a new carb but the mower refused to run for more than 5 minutes before dying. I decoked it and ground in the valves knowing this would help but not cure the fault at least I then knew compression was fine. I quickly found the magneto at fault breaking down as it became hot but I wonder how many otherwise excellent mowers have been scrapped just for the sake of a £28 magneto in this case and the magneto is a very easy fix taking less than five minutes. YouTube videos are generally very useful but it pays to have an open mind and exercise common sense. 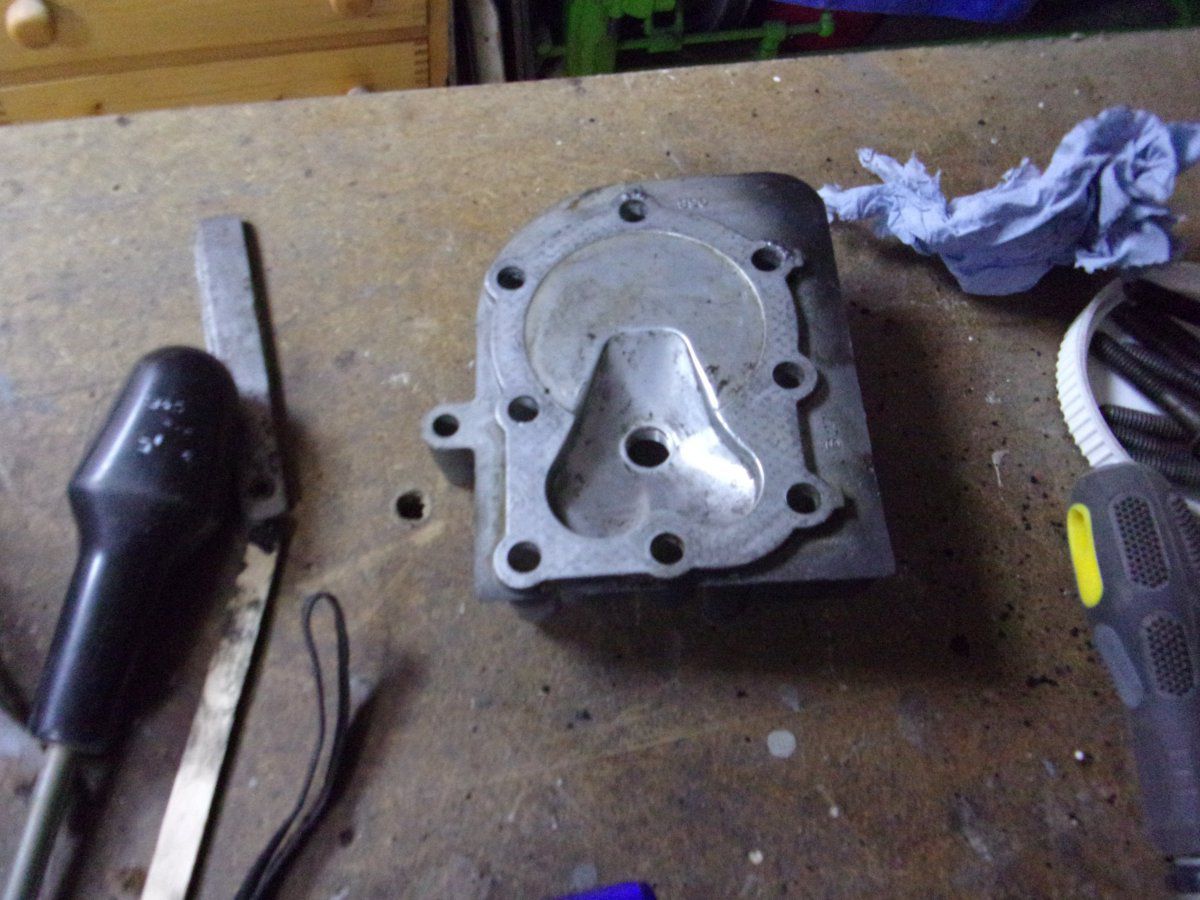 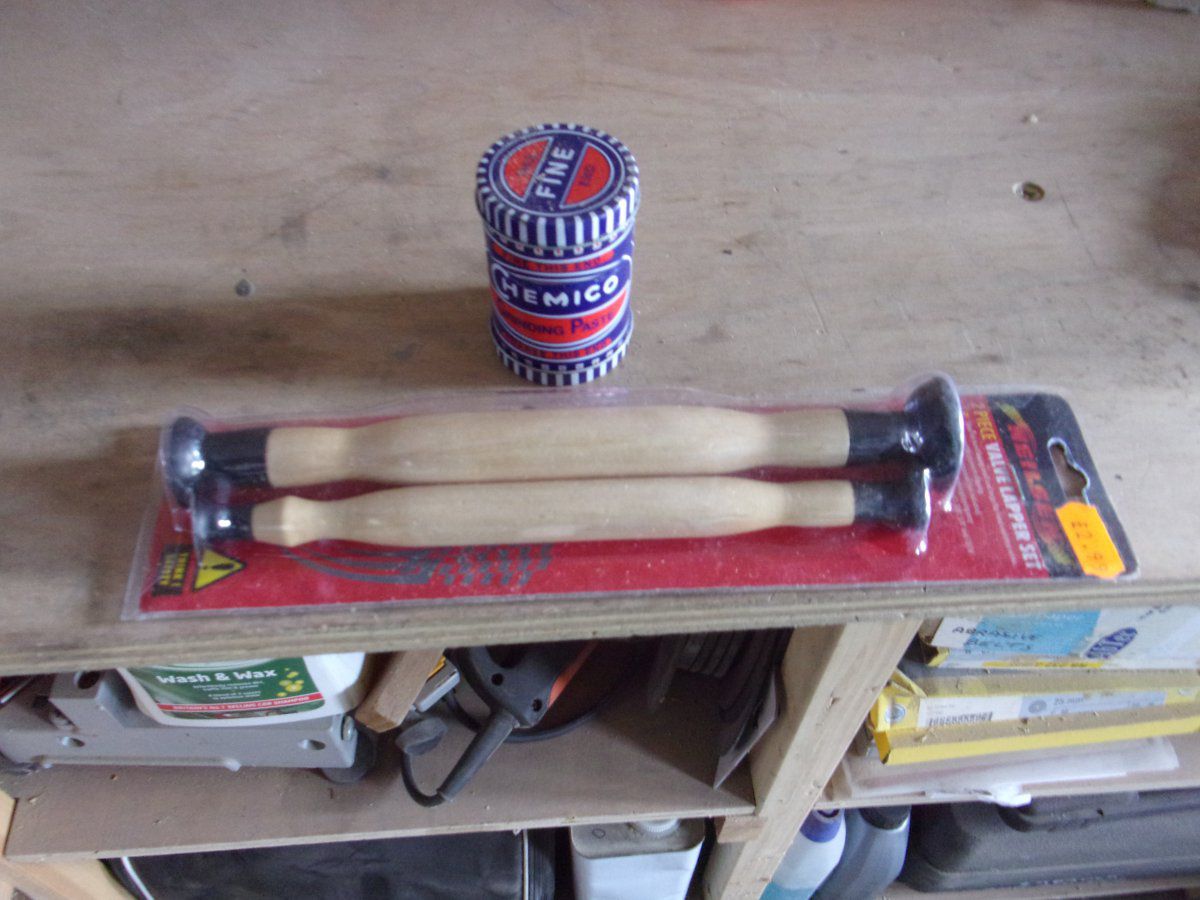 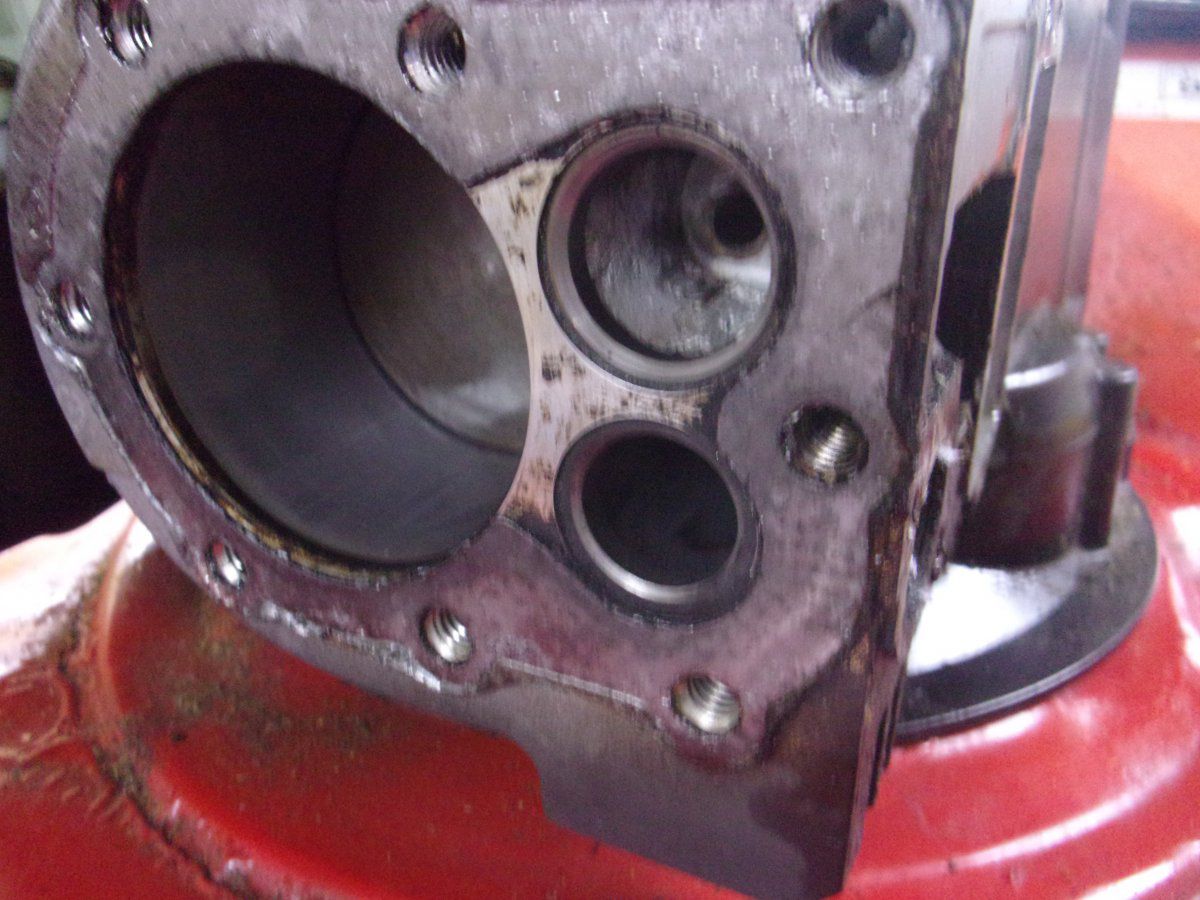 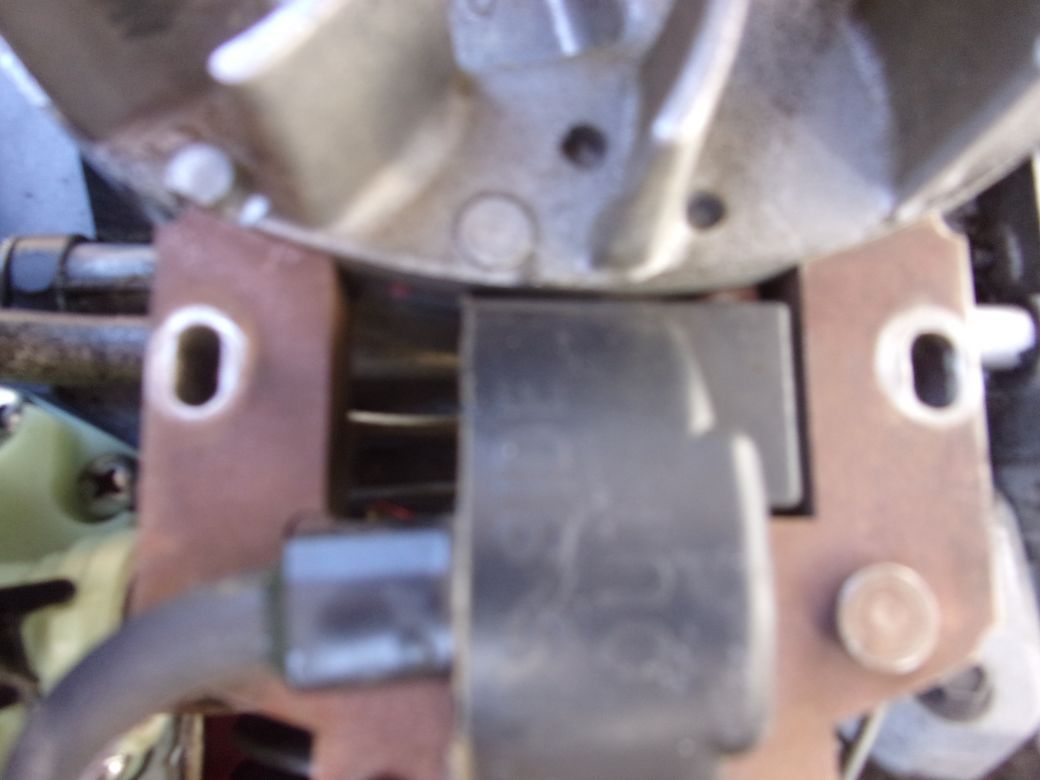 The faulty magneto; I suspected the SCR (silicon controlled rectifier) which is embedded with a capacitor etc was breaking down when hot then when it cooled the mower would fire up and run as normal again for a short period. I'm familiar with SCR's and have used them whilst making home made bench power supplies but they need a decent sized heat sink to dissipate heat. All the symptoms though of fuel starvation when in fact the fault was ignition; this mower tried to torment me the way it had tormented David. When I had it home last Saturday I fired it up and it ran for five minutes before dying but I had already taken resistance reading of the plug lead to ground whilst it was cold but now very hot the resistance reading was just the same; I quickly checked for spark having bought a new spark indicator and sure enough the spark was still present; then I poured neat petrol into the carb intake and the mower roughly fired up all this indicating fuel starvation and the many YouTube videos to be correct? At first I was puzzled so I browsed the web and found what I was looking for; a circuit diagram of one of these type of magnetos and as soon as I saw it had an SCR I had the problem solved. When it comes to electronics I don't trust them one little bit even as in this case having tested the ignition; good try mower but your card is now marked. David is a top guy and did a good job with the fuel so I knew I didn't need to follow what he had already done however David simply hadn't the time to play further so he bought a new Honda mower; I've now got a spare mower that I'll keep. 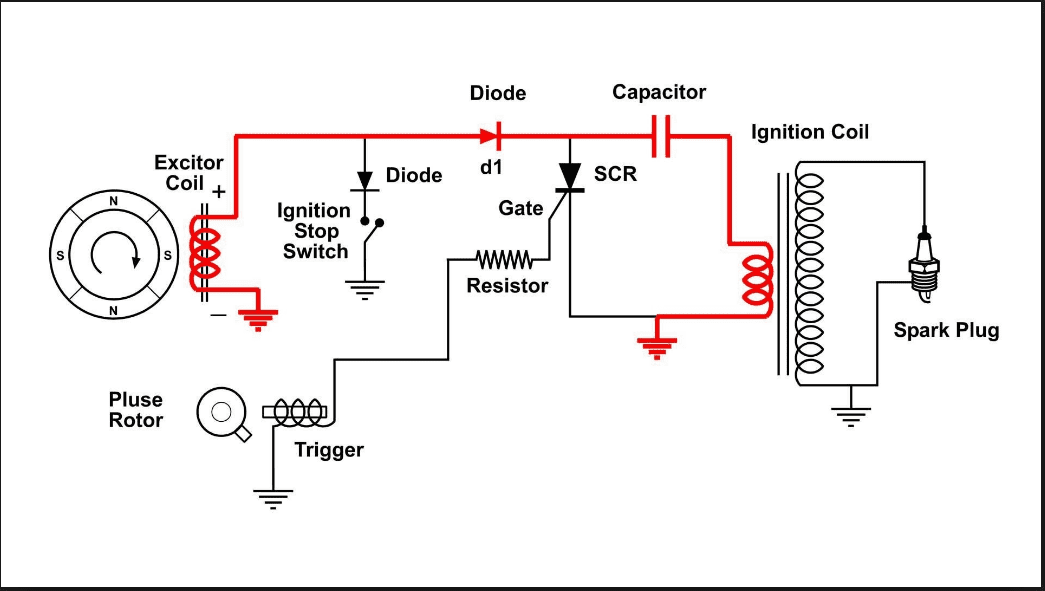 Above is a generic magneto circuit diagram; not specifically for this mower but plenty good enough for me to understand what most likely would be embedded in this faulty magneto. What's this got to do with weather; well my life was a lot sunnier once I found the solution.
Ad

Yes Colin it was cold this morning. It's not going to be very warm during the day, but it's sunny and dry that's the main thing.

Glad that you sorted the mower out and that's good that you can keep it.

Have a good day.

A good day to win money at the casino! Got lucky and tornado tracks missed us! Rain hit though, we had rain rates of 5 inches per hour. 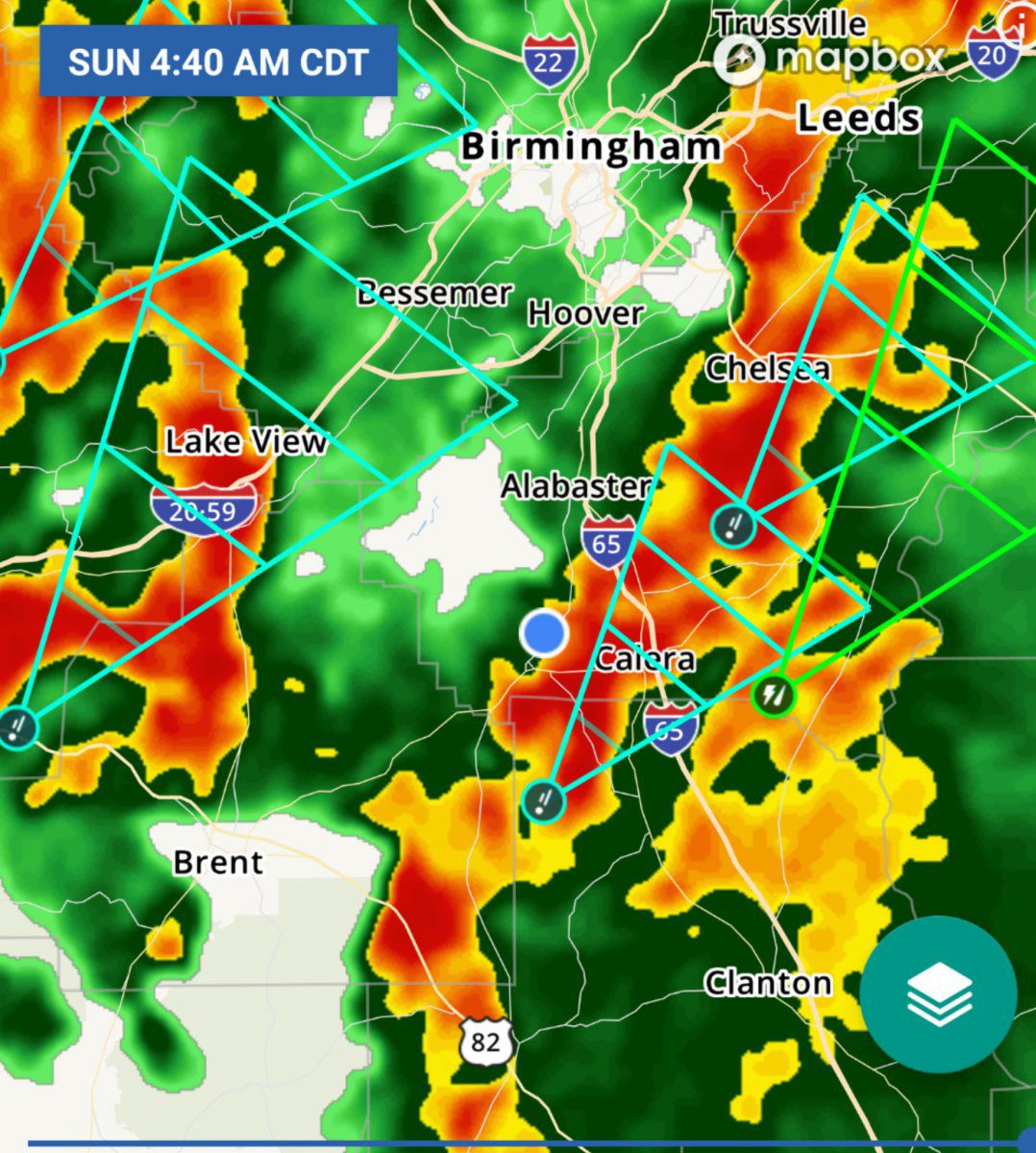 Good morning all light cloud and gentle breeze temp 4 to 12c
Sunrise was 6.11
Sunset 20.05
Have a good day all

WOW; no frost this morning so it must be British Summer Time after all; a 20C rise in temperature and it will feel comfortable outside.

Good morning all sunny intervals and light winds temp 6 to 12c
Sunrise was 6.09
Sunset 20.07
Have a good day all

Similar for us too Logan so not a bad day; where's my personal cloud and constant companion Blackie though now I need him to water all the meadow flower seeds I've sown?

Nice and sunny now with light winds.
How are your seeds, have they come up yet Colin?

Thanks for asking and taking an interest Logan. I thought I'd try growing cerastium (Snow in summer) from seed but the only level place in the garden was the top of the pathway bordering stone; anyway I filled about two dozen new pots with potting compost and added the seeds; hardly any rain at all lately because my cloud Blackie must be on holiday now the seeds are sown but his sister Gale remains to dry out the pots as soon as they were watered so in the end I've given up on the idea of trying to grow from seed; plug plants are so cheap through J Parkers saving all the hassle; I couldn't keep up with the watering because every time I looked the compost was dry.

However the thousands of meadow flower seeds I scattered to the mountain top and side garden something is putting in an appearance; many tiny seedlings have popped up and I hope these are the meadow flowers and not weeds; I've been so fed up with Blackie over many years constantly complaining about his presence I think I've hurt his feelings so now he's not going to water the seeds for me? At the very top of the garden I hope to create a small meadow to attract the bees and insect life; this morning I was out Cleaver hunting; last year Cleavers proved to be a real menace so now I'm out everyday ripping them out as soon as they appear.

My next job though is deciding whether to build a second garden hut or a Hobbit House; I favour a Hobbit House but wonder if my hips will stand moving lots of heavy material up the mountain; I need to be a bit more careful these days. 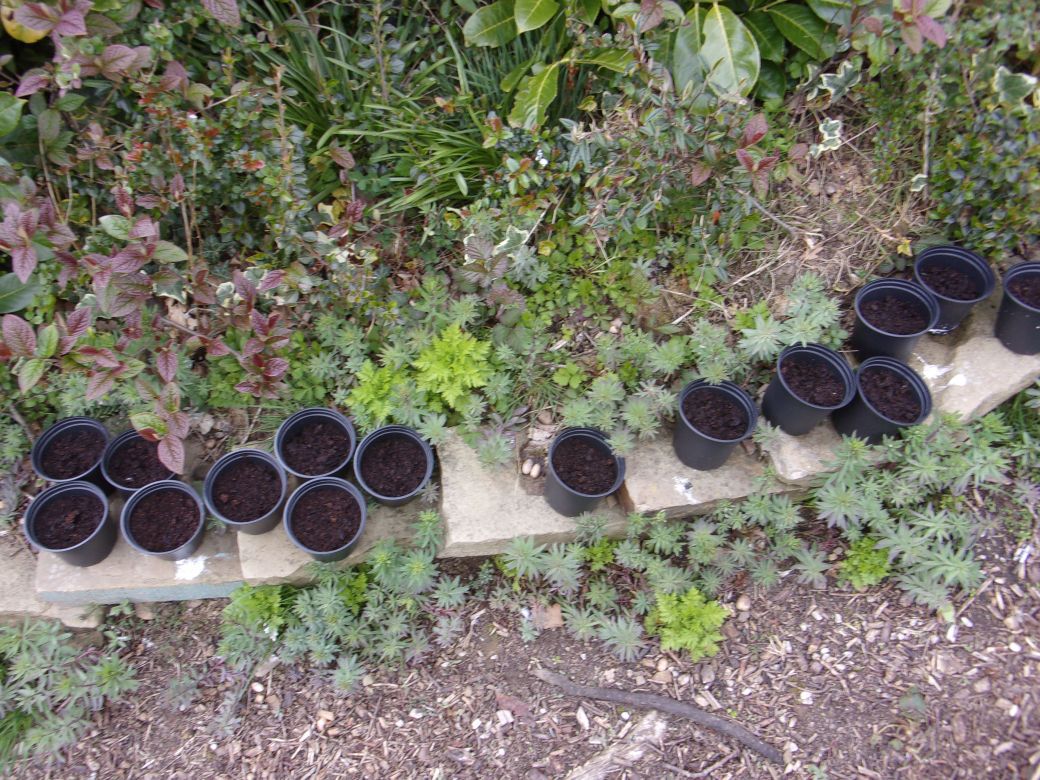 Too much time and effort due to the compost drying out rapidly; plug plants are cheap enough. 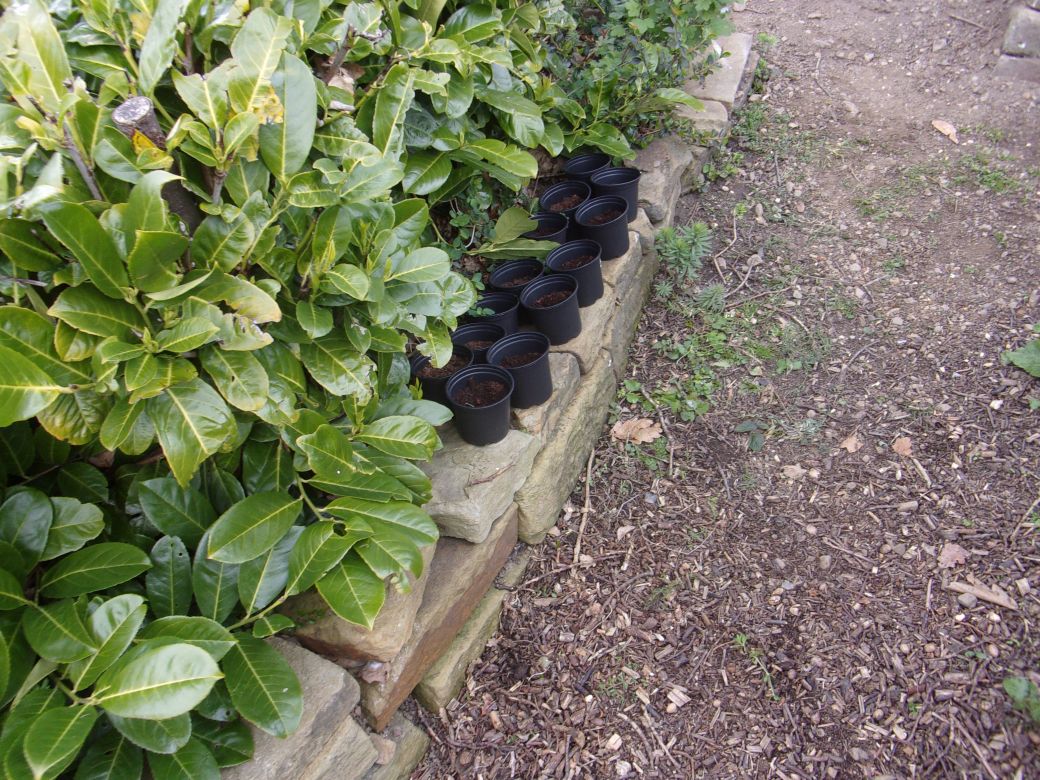 Well I hope they're your seeds that are coming up and not weeds.

Yes I'd give it a good thought on what you should do about your sheds, we're not getting any younger.

Good morning all light cloud and gentle breeze temp 9 to 19c
Sunrise was 6.05
Sunset 20.11
Sunny intervals later
Have a good day all

The temperature on the bank thermometer downtown reached 80 degrees.

Good morning all sunny and light winds temp 8 to 21c
Heatwave
Sunrise was 6.03
Sunset 20.12
Now that the temperature has risen i can water in the nematodes for vine weevil grubs in the pots.
Have a good day all


Logan said:
Well I hope they're your seeds that are coming up and not weeds.

Yes I'd give it a good thought on what you should do about your sheds, we're not getting any younger.
Click to expand...

Thanks Logan. If the seedlings are weeds then I'm in trouble given the huge numbers involved; I hope it doesn't turn out like "The day of the triffids".

Having visited three supermarkets and then fuelling the car I was home by 8:30 this morning so I'm off to a good start; after a mug of tea and hot cross bun I'm painting handrails today making the most of this glorious weather whilst it lasts.

Decision now made too regarding garden hut or Hobbit House; garden hut it is and yesterday we bought the treated timber it being delivered next Monday morning; not cheap at £455 for what will be a 6' x 5' garden hut but the huts I make can be leaned on. I'm looking forward to using my machines in anger again after the winter lay off.

That's great Colin, good luck with the hut and hope that you haven't got many weeds.

What a wonderful morning with gorgeous weather; I've just put my Bosch random orbit sander to good use sanding down the handrail and the handrail now has a coat of Zinsser cover stain primer; after dinner I'll apply another coat of Zinsser then tomorrow the top coat; if only every day was like this.

Absolutely gorgeous morning here the sun is already beating down so I'm making the most of it. Another job ticked off; I've just replaced our old 120W linear security lamp with a new big LED security lamp so now we have a pair of these LED lamps to the rear of the bungalow. After a mug of tea I'll start installing a pair of double 13A outside sockets; one to the front one to the rear of the bungalow these will save the hassle of opening a window or door to plug in an extension lead; then I've the two coach lamps I fully restored to install by our front door; then give the handrail its final top coat of paint; then I need to plane a bit off our rear door finally a load of timber is due tomorrow morning to build our new garden hut with; I find these jobs far more interesting than watching guys kick a ball around.

I'd better get cracking because I've a long overdue appointment with a big SDS drill.

Kind regards, Colin.
You must log in or register to reply here.