Plants for side of house - replacing laurel

Ian posted in another topic about the drastic pruning we've done to our laurel, and we've been thinking about what to do with it - see whether it grows back, or replace it with something better.

Our house is about 8 years old, and we think that the laurel was originally put in by the builders once they were finished - it's very fast growing, so you get a hedge quite quickly which appeals to house-buyers. We've been here for about 2 years now, and the previous owner let the laurel grow too big to easily manage. Ian was finding it really difficult to keep under control, so we decided to cut it right back into something that could be trimmed more easily... however doing so has revealed that we have an area where we could actually plant something nice!

Here are some photos: 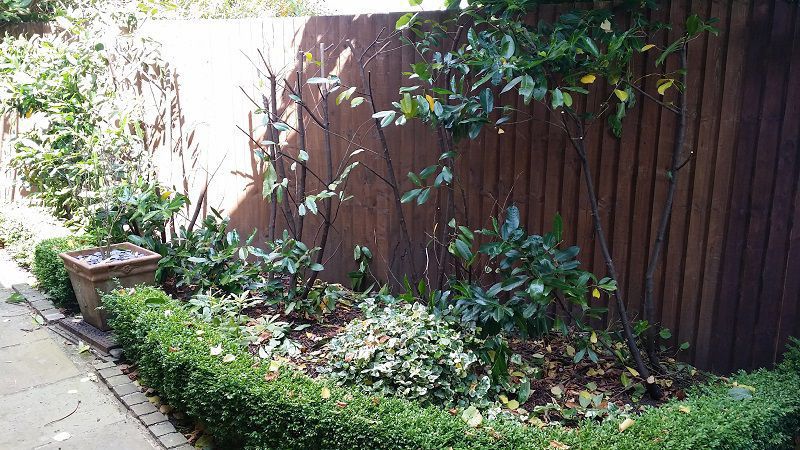 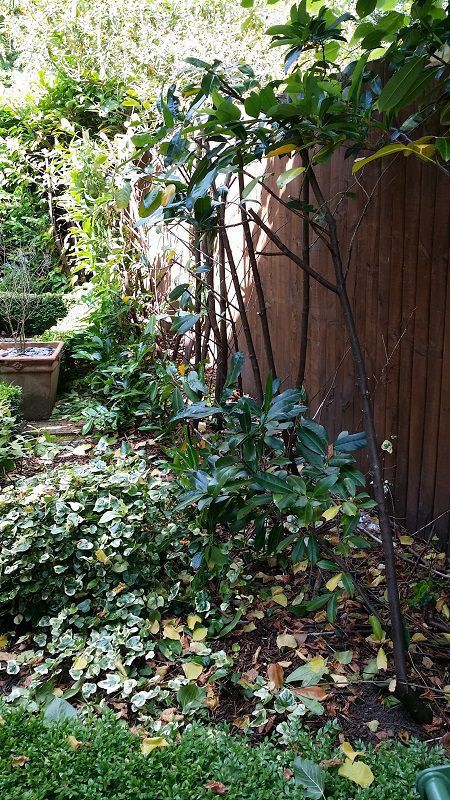 What we've got is a long right-angled triangle. As you can see there isn't much left of the laurel! It was previously taking up almost all of the area. The variegated ivy you can see is actually planted in a pot - left by the previous owner, easily moved.

If the laurel grows back and we can keep it under control, then I suppose that's an easy solution with what to do here. Anyone have any experience with such a harsh cut-back??

Alternatively, now that the main bulk is gone it would be easy enough to get rid of it entirely and plant something else. The fence is actually almost south facing, but the house is right behind where I was taking the photos so it doesn't get a lot of direct sunlight. There are also Lime Trees (not the fruit kind, the fast growing kind) behind the fence which shade the area, especially in summertime.

Security is an issue on this side, so it would be nice to have a hedge of some sort here. I was thinking perhaps pyracantha... we have it growing well along another fence, and it has been trained to be quite thin therefore it wouldn't take up as much space as the laurel. We could perhaps plant a nice shrub in the wide part, or maybe a load of bulbs and have a colour explosion!

That was the first thing that I thought of too gata montes. It really looks like an ideal location for the viburnum, they really aren't fussy about where you plant them or demand much in terms of care.

Thanks for the advice, this sounds like an excellent idea! I could have a few different ones, and they smell really nice don't they? So far my record with them isn't great... we put one in our front garden and it died but I can only improve from there! Might pop along to our local nursery and see what they've got this weekend

Becky said:
Thanks for the advice, this sounds like an excellent idea! I could have a few different ones, and they smell really nice don't they? So far my record with them isn't great... we put one in our front garden and it died but I can only improve from there! Might pop along to our local nursery and see what they've got this weekend

They are pretty hardy plants - so don't think you'll too much trouble if choosing some from your local nursery - as they are sure to stock the varieties that will do well in your area and if you do decide to plant them - would love to know which ones you choose
You must log in or register to reply here.