Not surprised that one was posted! Good Choice!

The album from which this comes, sold a million copies, but took 20 years to do it. There's an increasing number of fans for you.

Commonly known as "The Stewardess Song."


The Sara in the song refers to songwriter Sara Allen, with whom Daryl Hall had a thirty year relationship ending in 2001, but they still collaborated in songwriting.

Her name's in the title of this one too.

I can play that. live recording with a mike on my old leccy piano.

Sean Regan said:
I can play that. live recording with a mike on my old leccy piano.

Sean what a soothing play to wake to thank you...it must be wonderful playing your own music and hearing it back

It's interesting to listen to all the young talent out there, here's just one example of a young drummer from Germany...

Gail_68 said:
Sean what a soothing play to wake to thank you...it must be wonderful playing your own music and hearing it back


They don't call the latest generation of leccy pianos "work stations" for nothin' as they can be a lot of work.

Here's a pretty basic description of my piano, I've left out loads of stuff.

This is the left end.

It controls the microphone system, for those brave enough to sing along with what they are playing, (or double track as many do).
It will also harmonise your voice if you choose, so as I see it, "you can sound twice as bad."
The only buttons I use on there are fade in and out and the ones to change the octave for the right hand. 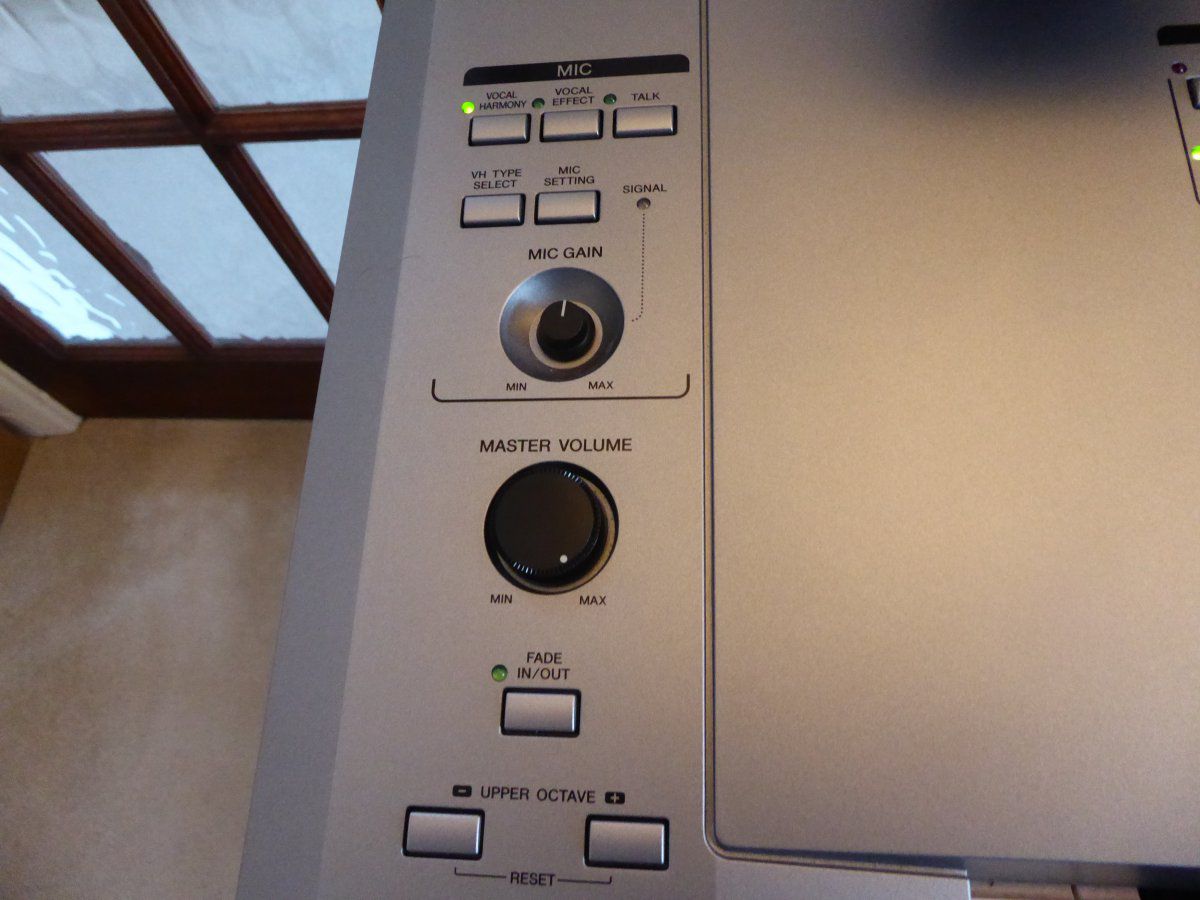 These are all the "styles." Each style has many pages with variations within that genre. They get displayed on the screen.
It also has above them all the recording and editing suite features, for adding multiple tracks to one recording, about which I know nothing and don't go there, as I don't use them.
I use just three buttons. Record, Stop, Play.
Below it is the button to transpose the key. So you can play something in the fingering of one key and it will come out in another key of your choice.
You can also choose the tempo.
There are four "multi-pad" keys, press any of these whilst you are playing and it'll add any "Ooo! or Ahh!" or effects sound of your choice of a couple of hundred. You preset these for the registration you are using. The "severity" goes up according to which button you press.

You can add three different types of "intros" and "endings" which are matched with which style you are playing. I occasionally will use an intro, but never an ending. The four "main variation" buttons control how "busy" is the accompaniment. 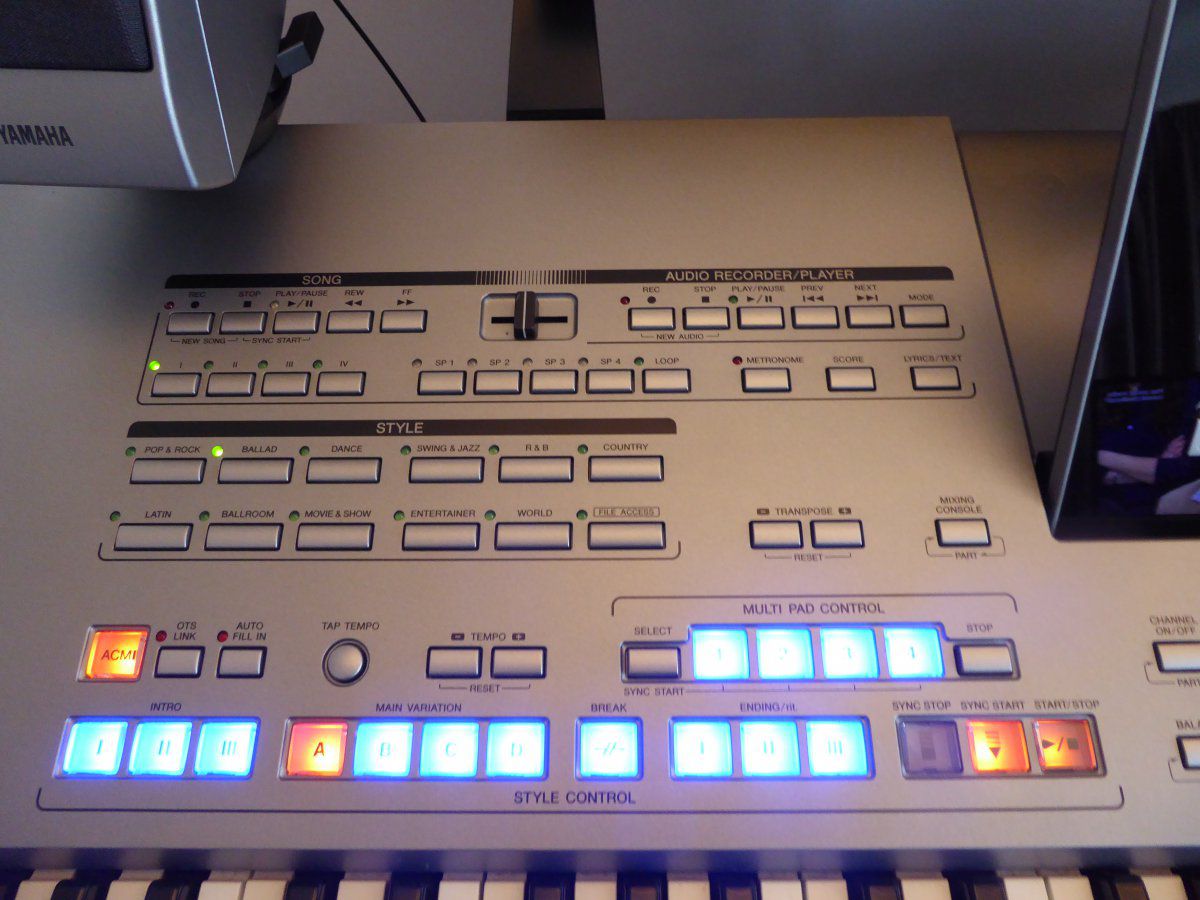 On the right hand side are the voices. There's pages and pages of different types of one, or groups of instruments. You can choose up to three voices for the right hand and one for the left hand. There's also the effects bank, harmony, sustain etc.

Then there's the 8 registration buttons, you can have that many variations of instruments for just the one song, if you want.

There's also a "music finder" which lists nearly 2000 popular tunes and suitable styles and tempo registrations which suit them. Though the voices suggested, I rarely like. But they are easy to change, so half the work is done for you. 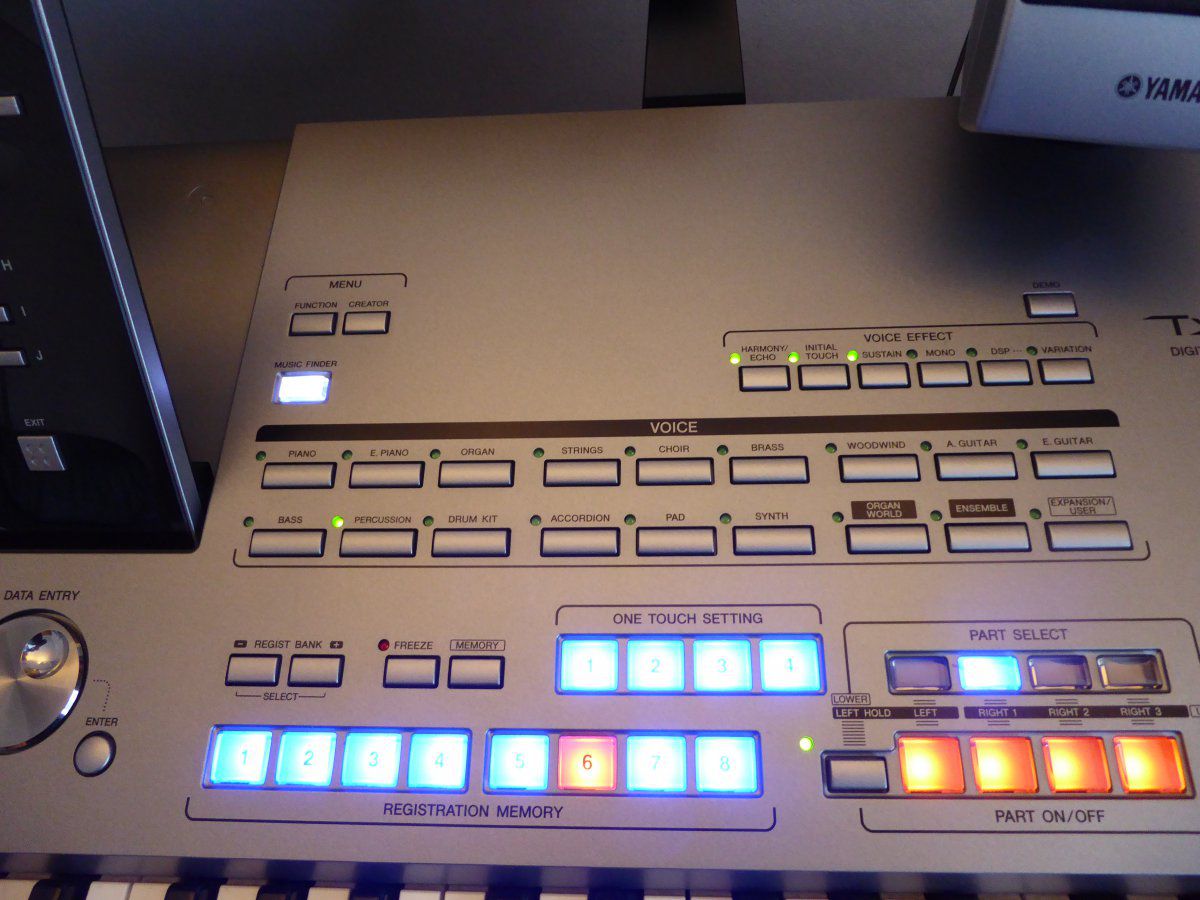 This screen tells you what you're doing. Or more likely what you "think" you're doing, displaying all your current settinfgs for one registration. It folds down when you're not playing so the cover will fit over the whole piano. You can set it to remember different styles, say Latin and you can have your own 8 variations within that genre.
Here it's set for one tune I'm working on. The number of settings which you can save on the hard drive is endless. 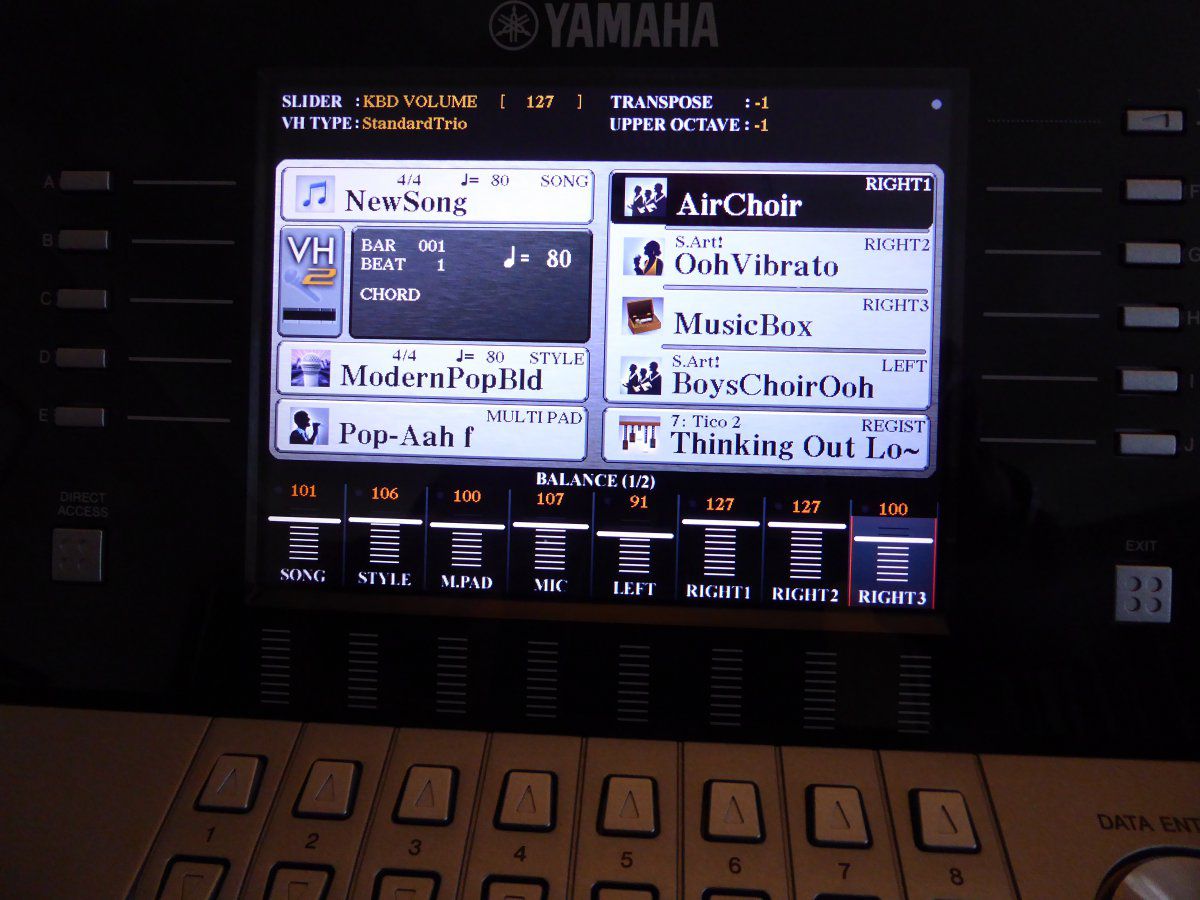 These are the balance controls, the sliders alter the volumes quickly and the up and down buttons one digit at a time. 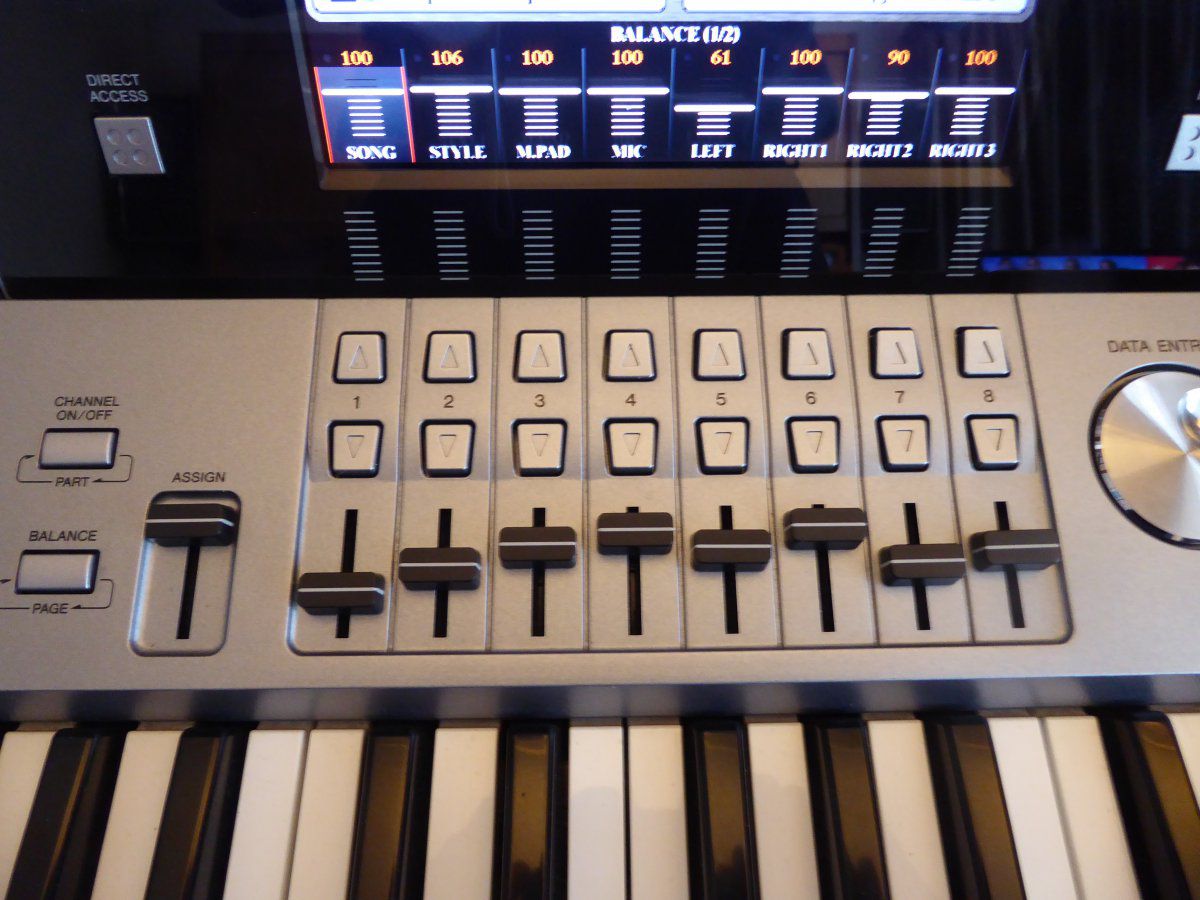 There's two USB sockets, one on the front one on the back, so you can copy recordings and save more registrations if you've a lot on the hard drive. 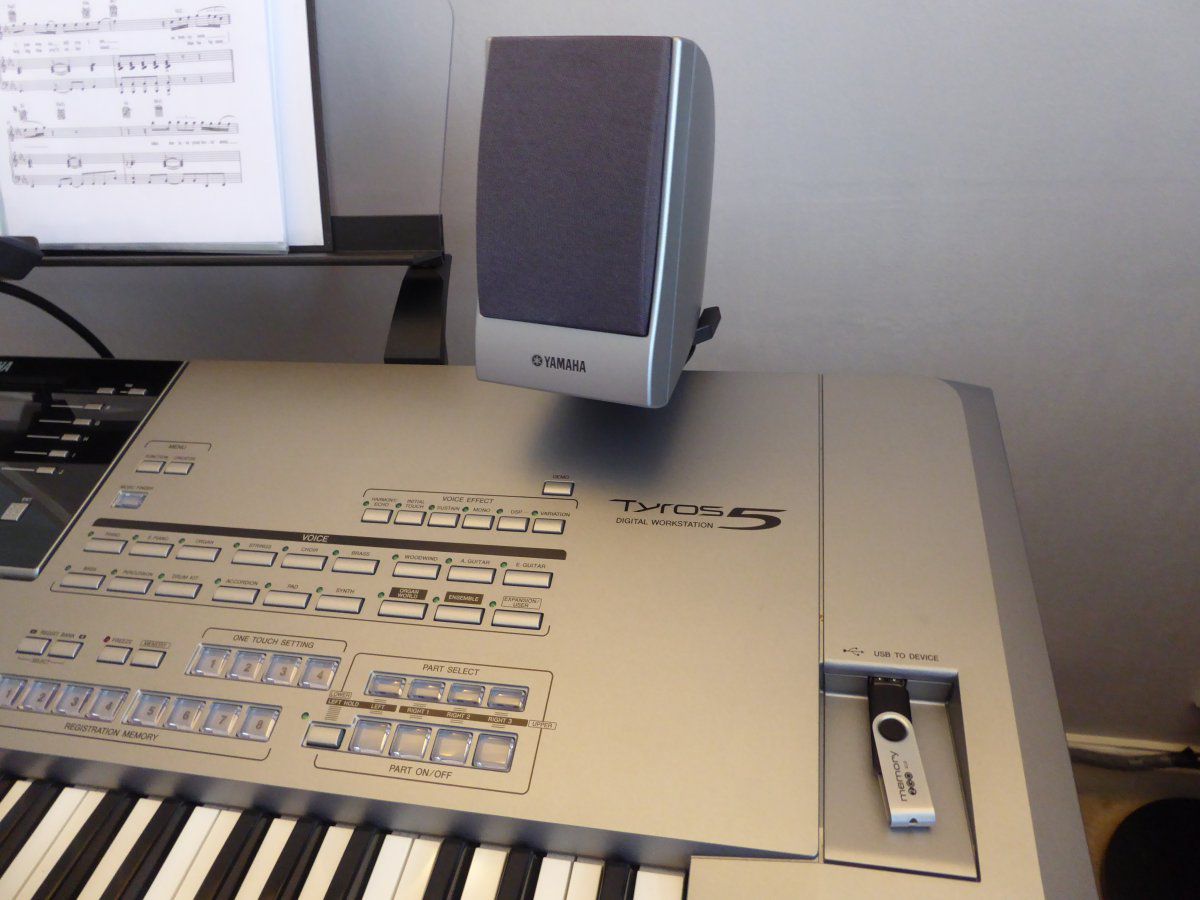 You can only hear it with headphones, unless you turn on the sub-woofer which also houses the amplifier. It has a "floorboard rattling bass" if you turn it up. It's sitting a fabric covered polystyrene box I made to cut out the vibration through the floor. Its position behind a leg of the stand, is simply to save room.
I use three foot pedals. You can set them to do a multitude of things. From the left, mine are set for "stop/start" "fade in/out" and volume.
I've had the same pedals for over 20 years used on three different pianos in their time.
They are fixed by sticky back velcro to a bit of laminate flooring to stop them moving about when I'm playing.
I've hidden all the connecting wires..... My wife hates wires! 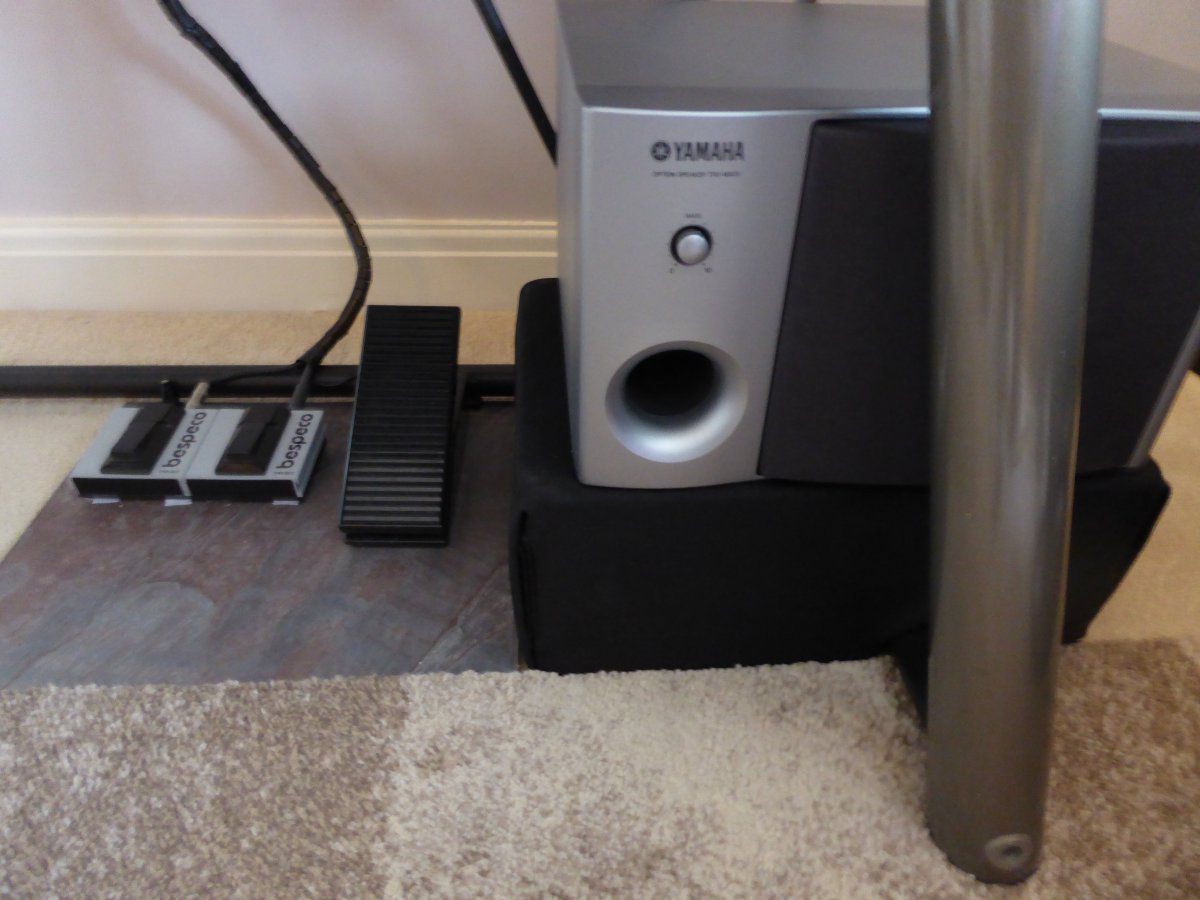 This is a 76 key version,. they do a 61 key one too. As the keys are narrower than a conventional piano, with the stool tucked away when not in use, it doesn't take up too much space in our small front room. The headphones are on a hook on the stand. So my wife can get round it with the vacuum cleaner. 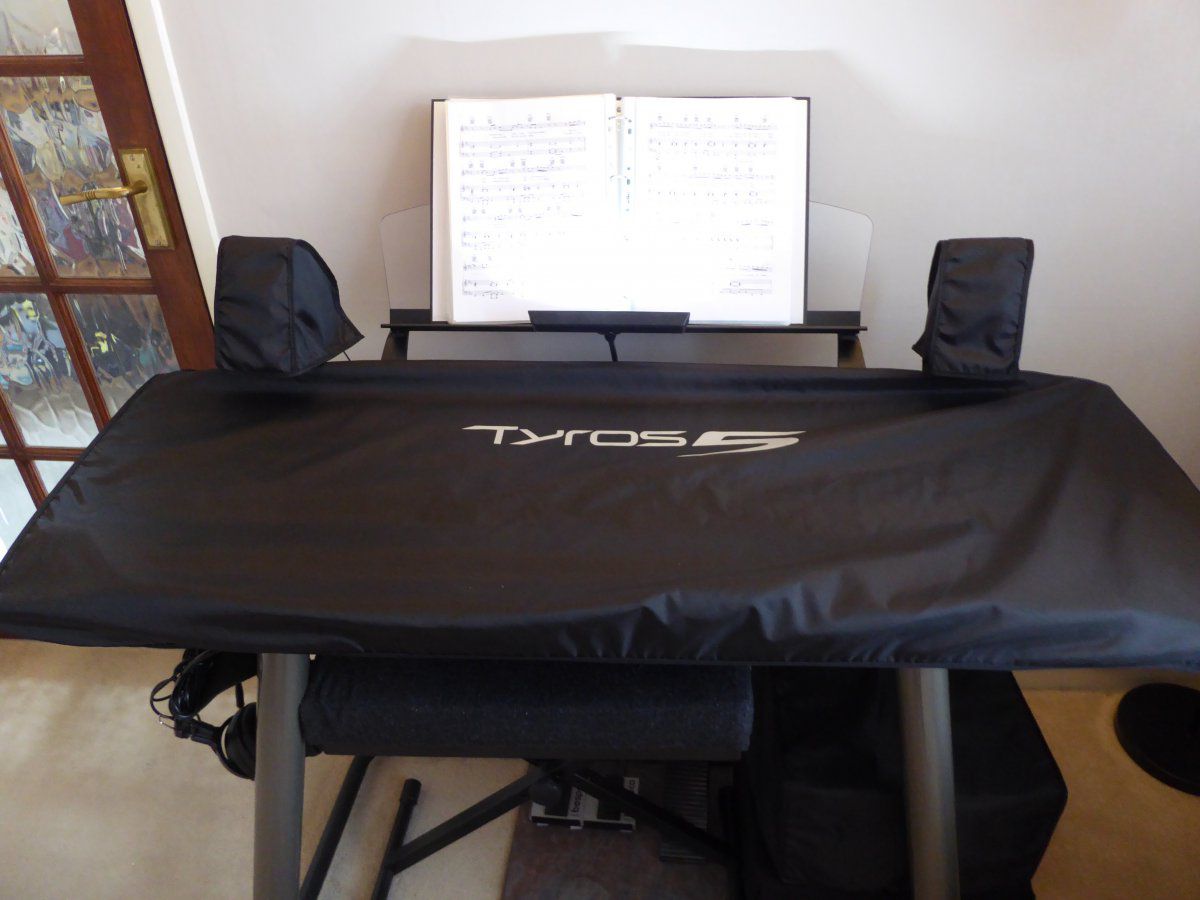 ...does your wife listen to you playing?

Gail_68 said:
Sean what a lovely rigged up system and thanks for adding the pic's plus explaining and I see you have the best YAMAHA

...does your wife listen to you playing?
Click to expand...

I only play my tenor sax during the day time. Fortunately our neighbours in the adjoining semi are in their early 90s and deaf!


When it comes to the subject of music volume, I'm always reminded of this. Stan Freberg's comedy records were very popular way back.

Someone made this animation and used the recording.

Here's another animation set to one of his records.

This record was played eight years ago in a film on TV called "Adventureland," which was only a few years old. I've always liked it and I hadn't heard it for some time. I presumed it would have only been available on CD, but as it's from 1986, I was able to buy a mint copy on eBay of a 7" single for a couple of quid. It plays well in one of my two vinyl jukeboxes.

Hardiness Zone
No idea,depends on the weather

I loved that video of the rehearsal out-takes. It just looked like they were having fun!

I love some of the classic standards, especially when they are performed by jazz musicians, I've this tune recorded by about a dozen diffeerent artists.
There's fifty years between these two recordings, just a couple of those I have.

Hardiness Zone
No idea,depends on the weather

longk said:
I loved that video of the rehearsal out-takes. It just looked like they were having fun!

longk said:
I loved that video of the rehearsal out-takes. It just looked like they were having fun!

Another great tune that matures with age ..They are on my bucket list to see keith x

Joolz said:
Another great tune that matures with age ..They are on my bucket list to see keith x
Click to expand...

Better get your skates on, they're in their sixties now!!!

Here's that song I for which I was setting the registrations, in a photo of the screen on my keyboard in a previous post
I had to check the video on YouTube as didn't really know the tune. I was amazed that the original had had over two and a half billion hits.
Needs a bit of work.

app.box.com
You must log in or register to reply here.