This is when i was walking barley today, had to take him because hubby was having his second covid vaccination. 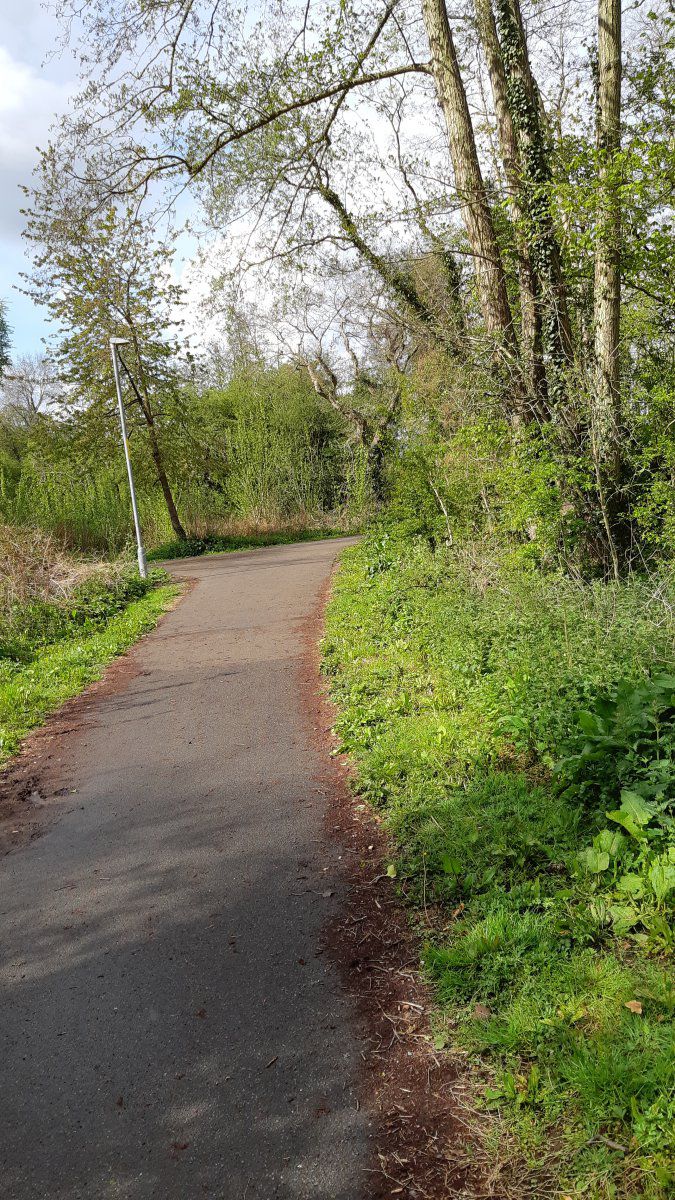 went into Battle and was injured yesterday. Missed a double kerb and fell flat on my face in the middle of Battle high street, dislocated my right shoulder. Everything is so hard with only a left hand, planted out 19 mange tout seedlings and watered the greenhouse, then had to have a lie down. It's exhausting.

Oh dear @Oliver Buckle it's so easy to do, hope that you're better soon.

The new stylus cleaning brushes arrived for my jukeboxes today.

It was easy enough to change them. They just slide in and ouit. 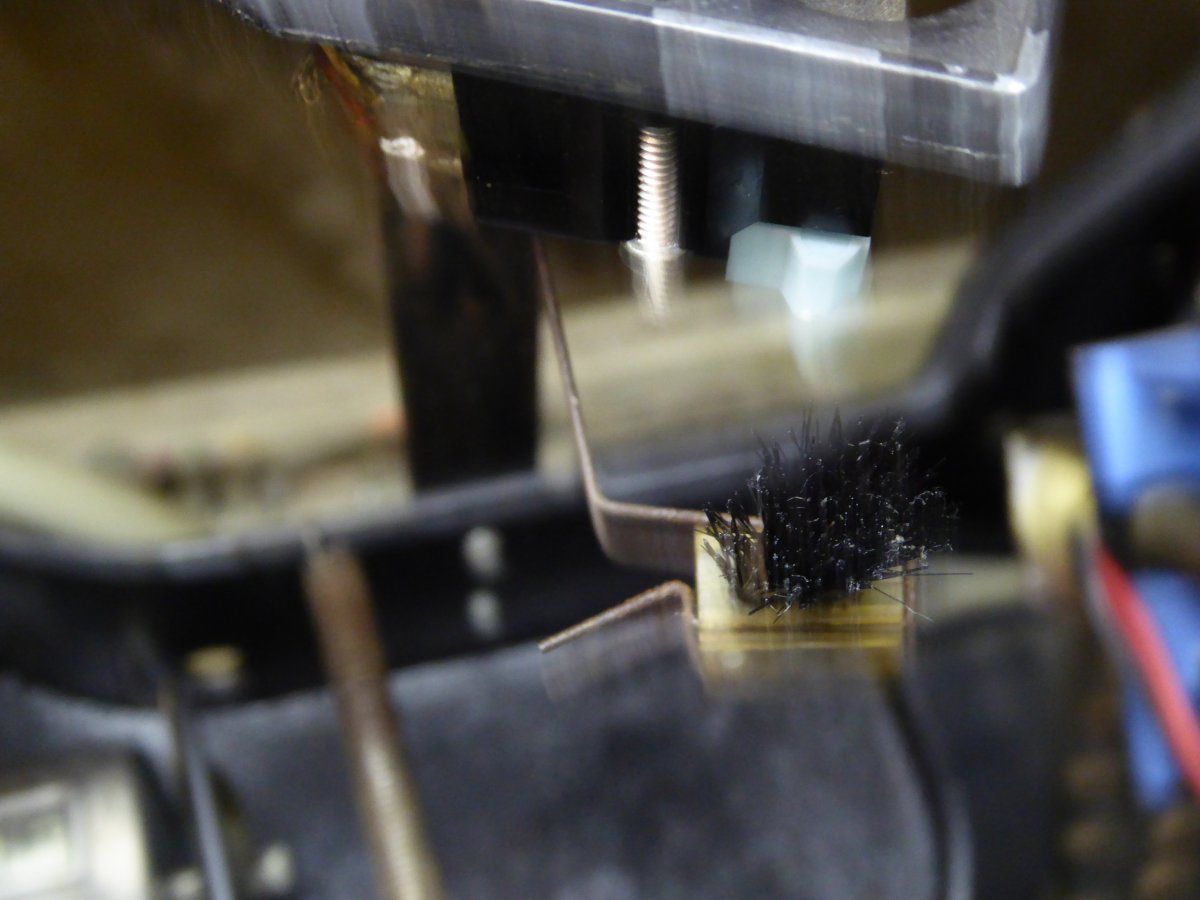 The new one has firmer bristles. (a bit out of focus). I had to be careful I didn't bend the holding spring upwards, there would be a danger of the body of the brush taking off the stylus as the tone arm passed over it.
The mechanics of jukeboxes "take no prisoners." 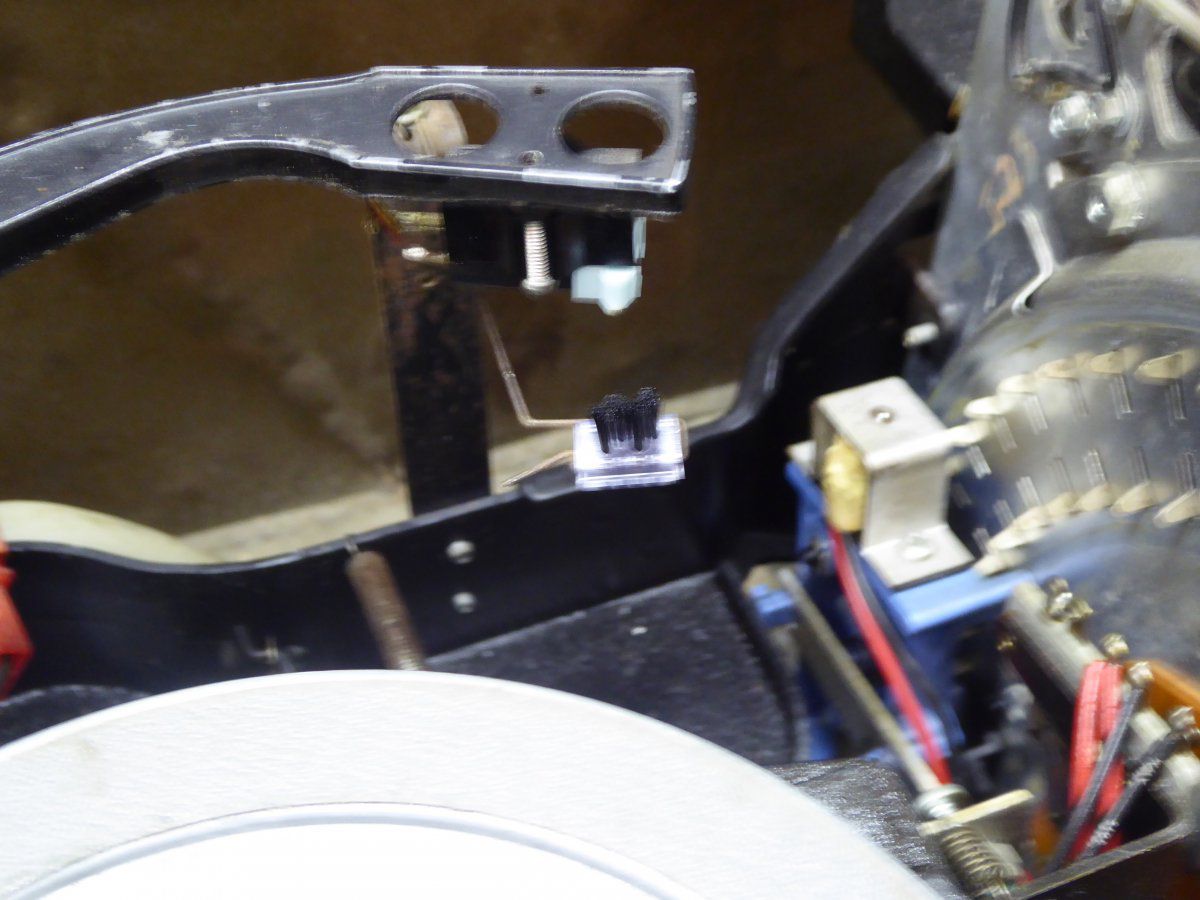 The 1976 box has a different mounting, a design improvement, no chance of getting the brush at the wrong height. 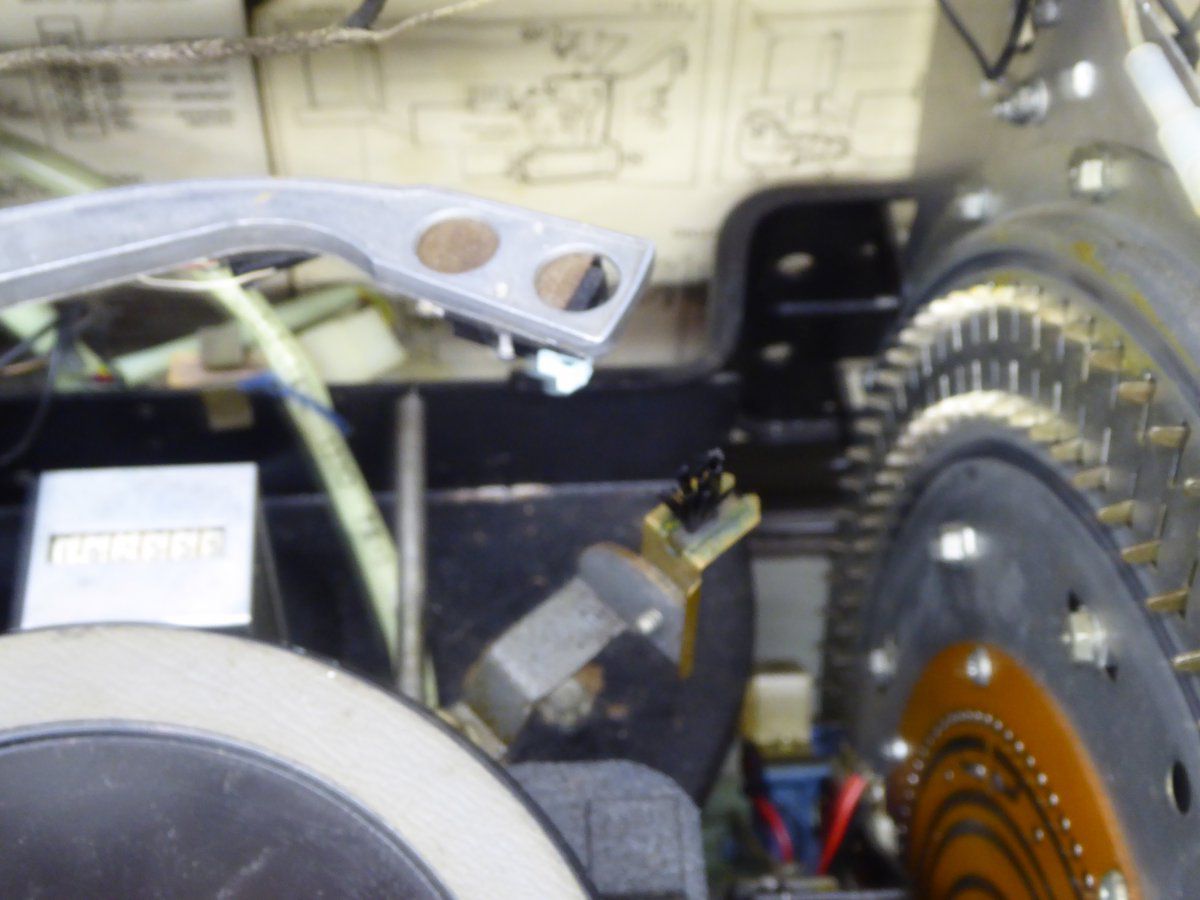 Not a lot today.

I was all set to go to golf but my car wouldn't start. It had been starting OK, always has, but the engine was turning over progressively slower. So I guessed it was the battery. I haven't been doing long runs lately, just mostly local stuff and a lot of stopping and starting so maybe the battery wasn't getting enough charge.
But today it wouldn't oblige. I called the emergency number of my insurers, they called the RAC. He was here within ten minutes. "I think he took slightly longer to get here than the automated voice on the phone took telling me all sorts of stuff about Covid, before a 'real' person responded to my request for service."

I was concerned that it might have been the alternator not charging. But they've this sophisticated kit on their vans that "tells them everything." He jump started it and it fired up first time. The test showed that it was the battery not holding charge and there was no problem with the alternator. I was pleased about that as that would have been a "dear do."
I could have then driven it down to Quick Fit or Halfords and got a new battery myself. I've done that with other cars. But I decided to let him get me a new one. It'll work out abou forty quid more than Hsalfords, but it will be a better battery. He's gone to Trafford Park to pick one up, he'll be back in an hour to fit it, as with the Covid situation, he's not getting many calls.
I'll have to punch in the security code for the radio afterwards, but fortunately, "I know where it is."

No golf, but there's going to be showers and I was in two minds about going anyway.
I'll probably clean the car inside and out (between the showers) and give the garage and shed a clean, I'm up to date with everything else in the garden.

This morning had my second vaccination the Astra zenica one.
Ad

Just house stuff. and trip planning. Leaving again Wednesday to Ocean City, Maryland. then soon after Nashville, TN. then after to York , PA. all with Sasha the show car.

Confirmed by the environment secretary peat based compost is going to be banned by 2024
Which is good but is there going to be a good alternative.
R

Logan said:
Confirmed by the environment secretary peat based compost is going to be banned by 2024
Which is good but is there going to be a good alternative.
Click to expand...

Here are some good ideas

Thank you @roadrunner but i prefer to buy it ready made, that way i know hopefully that it will be alright.

Today is hair washing day and hubby is watching this video because he like Tec stuff and I think that this guy Paul Hibbert is funny.

In the recent wet weather, we began to have a steady drip of water from the gutter above our back bedroom window. It was falling on the flat roof extension of our lounge. You could hear it in the room when the rain was heavy.

I was unable to get anyone to attend to it for at least a couple of weeks or more.
As a temporary measure, I put a bucket on the flat roof under it so when it overflowed the water wasn't constantly dripping on the same place on the roof all the time. 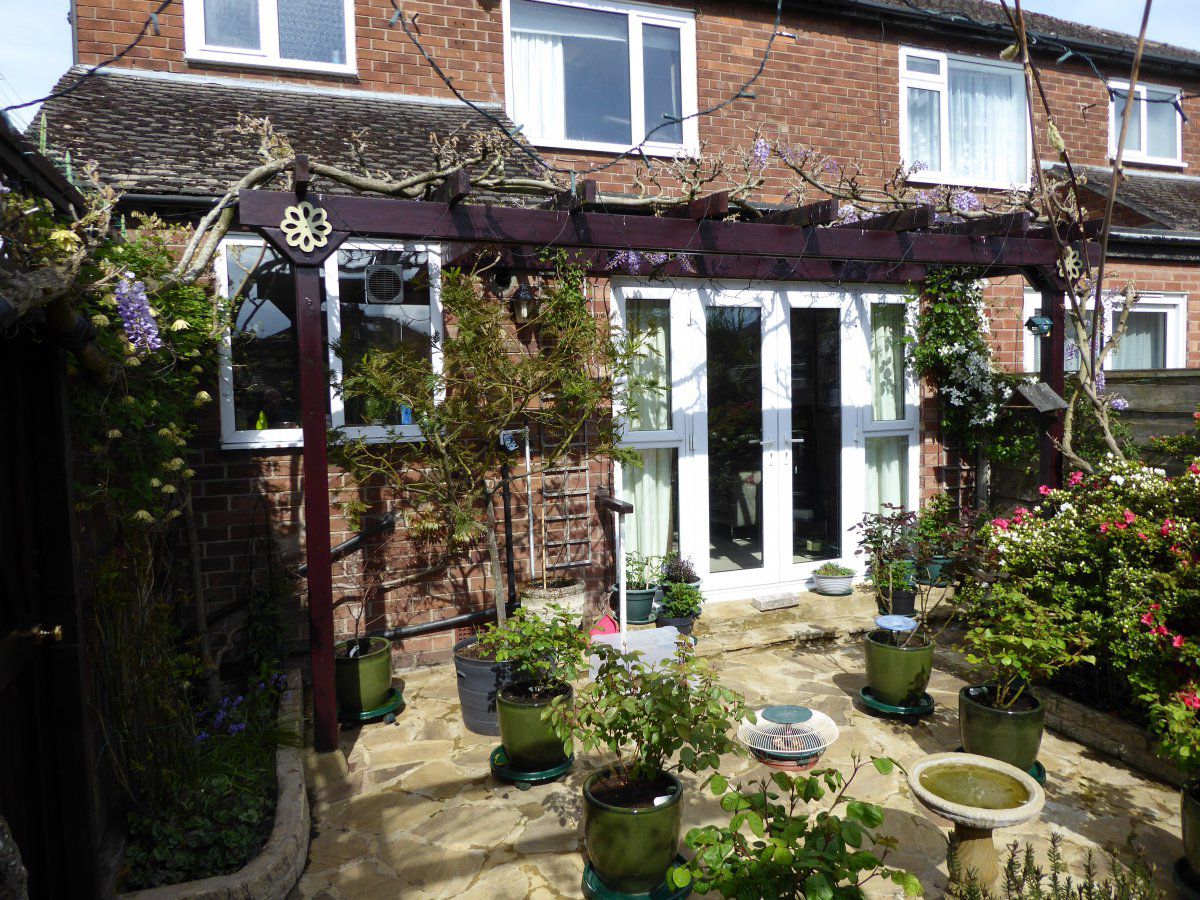 So as we'd had a few dry days I decided this afternoon to have a look at it myself. Just a question of putting up a ladder up between the cross beams of the pergola and a second ladder up to the gutter. The problem was obvious, the gutter was completely full of moss. So when wet the water wasn't getting away and as where it was dripping there was a marginal dip in the gutter, it was overflowing there.
The moss had all dried out and was easy to brush away. I did the whole length of the gutter including next door's bit. I checked the joints in the gutter and they were all sound. So I've saved myself a few quid.

I do find myself jobs to do.

I have this little cupboard in the tea-house. 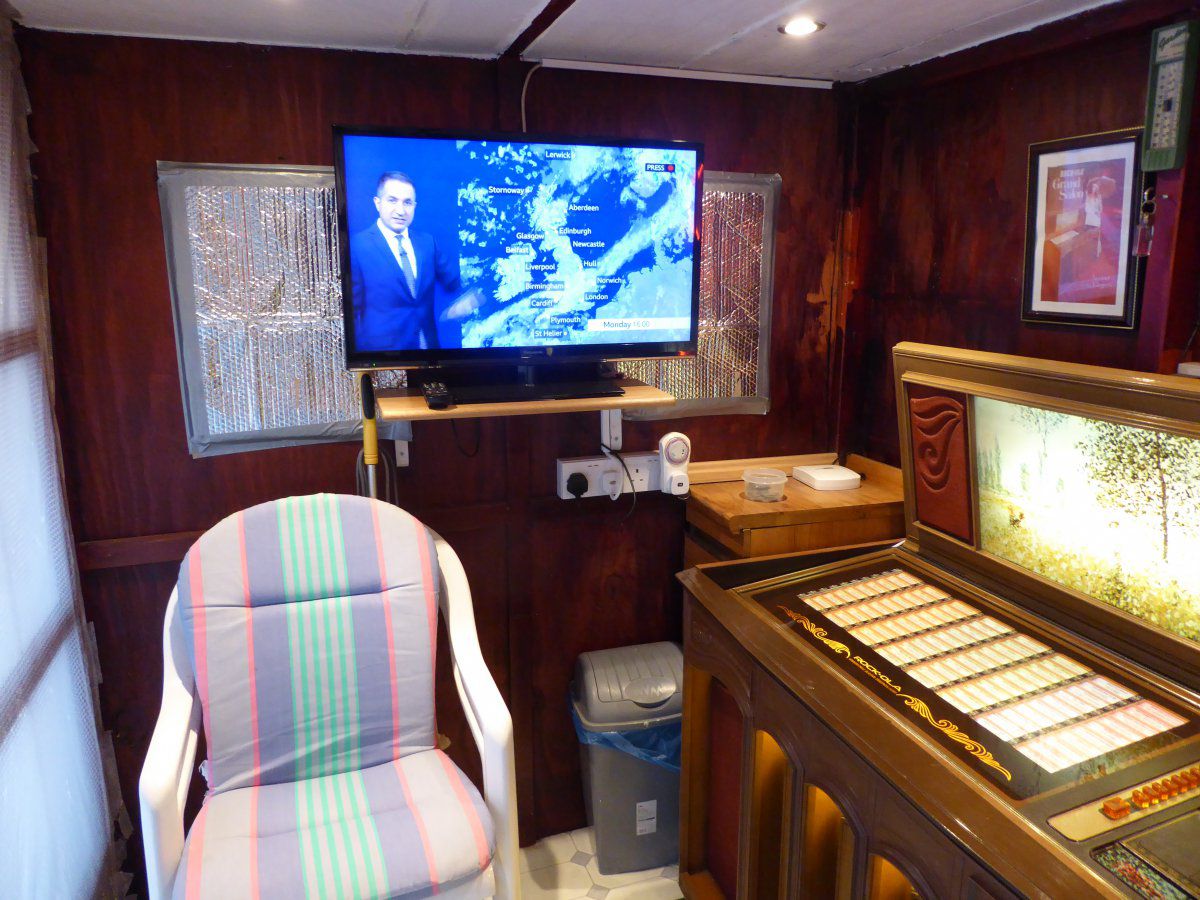 It's one I saved from when we had a new kitchen over fifteen years ago.
It's actually, a tall drawer, youre supposed to be able to pull it out to reveal some baskets to keep stuff in. But the mechanism is knackered and it's a fight every time to open it to get to the jukebox related tools, etc., I keep in there.
So this afternoon having had another fight with it to try to get at some cleaning materials, I'd had enough and decided to turn it into an ordinary cupboard, with a shelf inside. "There and then." At 6.00pm.

I managed to drag it all out and discarded everything apart from the front. To turn the front into a door, it needed Blum hinges fitted. Fortunately I'd saved several from the old kitchen units and I had a drill bit that's specifically for drilling the big shallow hole for that type of hinge. So it's done and dusted. Just a bit of a pain fitting the other half of the hinges in the unit. A "hands and knees job."
I was able to watch a bit of the tennis and now my Budweiser fridge on its stand is back in there under the TV (which I had to drag out of the way) I wasn't short of refteshment.
Last edited: Jun 4, 2021

The advantages with Blum hinges are that if you wsnt the door to stray open it will, but with a push it will snap shut and stay shut.

If at any time you want to take a door off, you just press the catch at the back of the hinge and it will pull off. They just snap on when you want to put them back.

There was no need for a door knob as there's the original brass channel on the top of the door that acts as the handle. 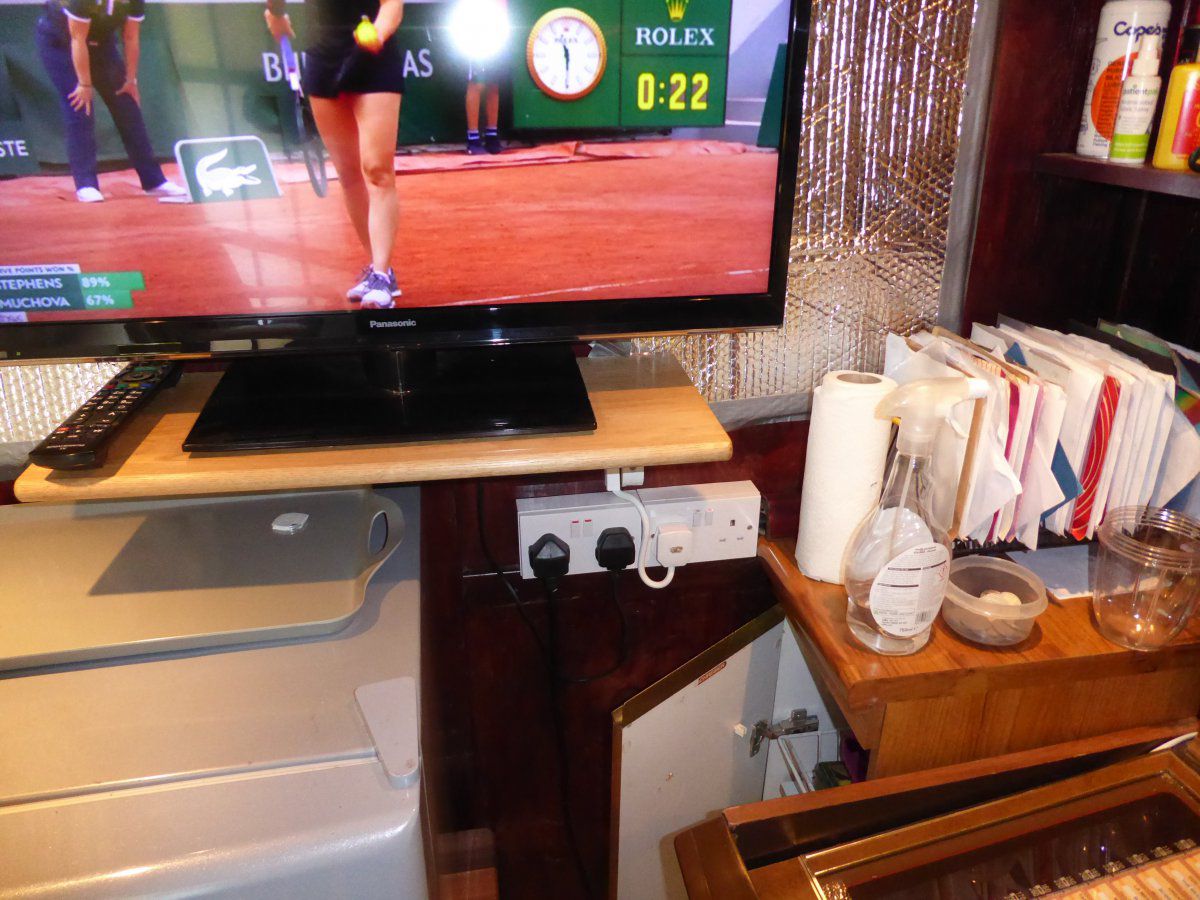 Been watching this bluetits nest live the parents have successfully reared 7 chicks out of 9 eggs and nearly ready to fledge.

Watching this other nest of great tits

Watching these videos about Iceland volcano

LouisFerdinand said:
I am writing a letter to a friend in England.
Click to expand...

Are you going to put it in a bottle. Postage rates are high.