Our daughter reminded me her airplane weather vane has a lifetime warranty. Easy, just a fresh coat of paint. It may need a new crankshaft some day because after a couple million miles the wood will usually wear the screw thin.

We had our second flu jab this evening. No waiting.

I reckon it will become an annual event for many, like the flu jab.

We had our flu jab last October, could have waited for the free one but hubby wanted his early and it was the first time for me never thought that i needed it until now.

Just made 2 jam tarts and biscuits 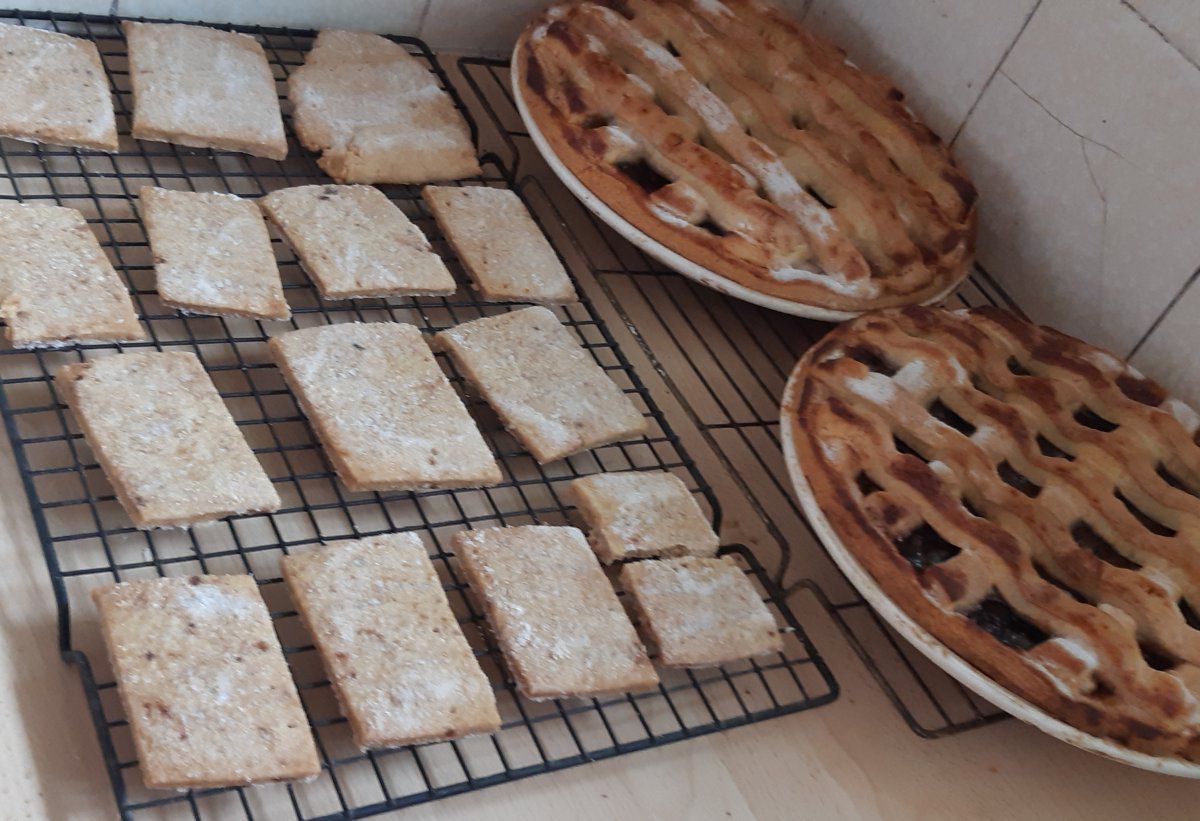 Oh yum I wish I could have a slice!

Watched this video about a working German shepherd who needs a new home after his owner died.

Been keeping up to date with this

I write for a hobby and have a video channel, 'Oliver Buckle' finds me on YouTube or my Facebook page 'The story shack'. It is mostly pieces I have written, all fairly short. I have not put up anything new for a while, but yesterday I managed to record and upload a 37 min. story. By far the longest I have done. The channel is hugely varied, but gardeners might like 'Flying lessons, it's about snails.
Ad

No gardening today.
When I find the TV choices poor, I've about 100 favourite films on my Humax hard drive I can watch..again. One file contains quite a few "film noir" classics. So today, I watched one of my favourites.
The 1944 film, "Laura" starring Gene Tierney, Dana Andrews and Clifton Webb.

The theme tune became a "jazz standard" and has been recorded by "the world and his wife... " even me.

At the moment there's only 3 programmes on the BBC channels are Keeping Faith, Line Of Duty and Gardeners world, that is for the week. Rest of the time I watch YouTube or on forums.
O

Logan said:
At the moment there's only 3 programmes on the BBC channels are Keeping Faith, Line Of Duty and Gardeners world, that is for the week. Rest of the time I watch YouTube or on forums.
Click to expand...


It wasn't any better before!


I've lost patience with Line of Duty, In my opionion Jed Mercurio has "lost the plot." In how to keep an audience entertained.
The complexand detailed interview procedures the police have to follow which he probably thinks are interesting, I find boring and the shoot-out tonight was completely far-fetched. Many of the characters seem to be just following a script rather than what they would do in a real life situation.
The thought, "how convenient" came across my mind in several situations tonight.

As I mentioned before, I find it far inferior to ITV's "Unforgotten," the characterisation was far more realistic.

I'm gonna get all technical here.


One of my jukeboxes was presenting an increasing problem. Even though the youngest is over forty years old, they were "cutting edge technology" in their day. There are three overload trips as well as over a dozen fuses. The mechanical overload trip was being activated with increasing regularity, which meant that one of the four motors, the one that turns the record carousel and the wobble plate selector mechanism at the other end of the spindle, kept stopping. If I put it on "scan" the carousel will turn for as long as you want it to. It would turn a bit slow and keep tripping out until after half a dozen turns the motor would warm up and then it would be OK, until the next day I played it.

Anyway, I suspected the motor needed a bit of a service. So this afternoon I took it out.

Not an easy job.

The motor and gearbox that drives the carousel, is down the bottom to the right of the carousel and down under the gripper arm mechanism, you can see this area at 1.24 in my video.


There is an access panel at the bottom of the back, but you have to lie full length on the floor and get at the three securing bolts with "spinner," these are spanners, that look like screwdrivers.
Then you're mostly doing it by feel as you can't see clearly what you're doing.

Anyway I got it out took it to pieces, cleaned up the commutator with some emery paper and put it back together again. It's behaved faultlessly since I did it this afternoon.

My wife says I shouldn't be doing this at 81.

I could have "got a man in," but they are few and far between and some won't do house calls, they expect you to get it to them. So that's hire a van and you'd need at least one other person to help you as they weigh around 300lb.
If I could have found someone to come out, what with travel and labour, I'd have got no change out of £200.

Barley has a habbit of licking the grass and sometimes finding something to eat on his walks. Yesterday he'd been licking the grass and this morning came down and he had the diahhroea, hubby took him out while I made the breakfast, he seems to be alright now but have to give him plain toast for a few days. These 2 never cry when they're like that but the others were.

Last night at 10.30pm hubby took barley out for a last wee around the house to the back. When he went round our front garden there was a woman with a plastic bag bending over looking at our wallflowers. Hubby asked her what she was doing she said that she wanted one of our plants to put in her garden. She was about to pull one up. Hubby said to her that it wasn't going to happen and that we worked hard at making the garden look nice for us and other people going by. She said I'll buy you some flowers or another plant, hubby said no it's not on and if i find that you've done it I'll know who you are and that you'll be in trouble. She walked away and hubby checked to see if she came back but she didn't.
It's not the first time something like that has happened.