What did you do in your garden today?

We're experiencing some strong winds today, so I took the usual precaution of moving our more than a dozen roses etc., in ceramic pots on our patios, over to the sides where they will get a bit of protection. If any of these pots get blown over, they will break.
Ad

Yesterday picked a lot of blueberries and maybe some more today if it doesn't rain.

Picked a bucket of tomatoes, watered the new seeds and emerging seedlings, stared wistfully at the okra I wish I cut 3 days ago, admired the colored peppers, and weeded and pruned 3 tomato plants. That pruning is gonna take a while. I wish is was not so hot. The tomato flowers are struggling. I watered again today. We are in this small area of extreme drought.

I've been busy removing the lawn for my new garden expansion. I've got about 80% of it removed. I can hardly wait to see how it looks in a couple years.

Started trenching for my new drip system. Only about 40 ish more feet to go.

Three rows of blueberry but I hacked down the first rows toward the sun. They have a beautiful light green regrowth color. 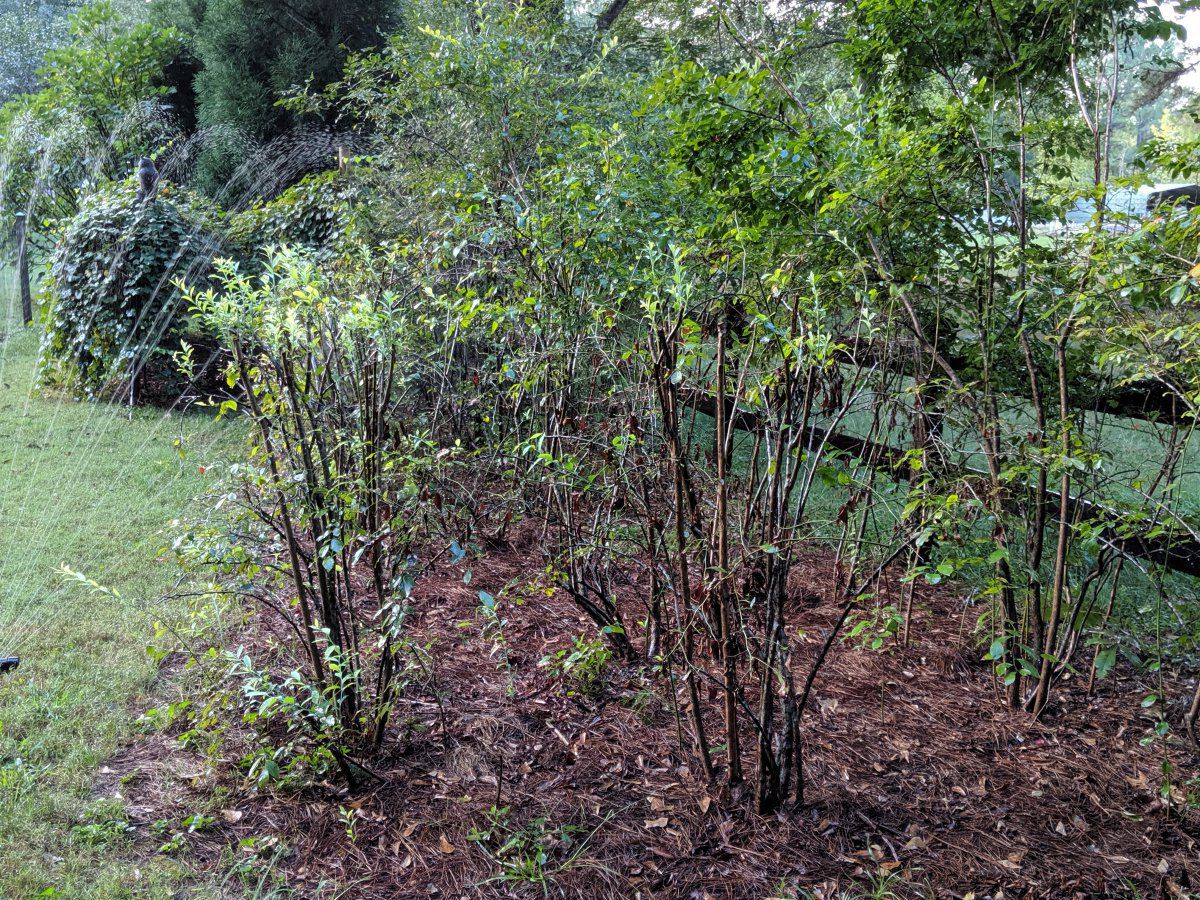 Didn't do anything in the garden today.

I had to get up onto the flat roof of the extension to our lounge and then up another ladder up to the guttering.

Our roof is tiled with rough finish tiles, ideal for walking on when I re-pointed the ridge tiles, the chimney and a few years ago replaced the TV aerial, but they do attract moss. The heavy rain on Sunday morning dislodged some of this and it ended up in the guttering which I noticed was overflowing, so I had to take a bucket and trowel to it to clear it. Then wash it out with the hose. 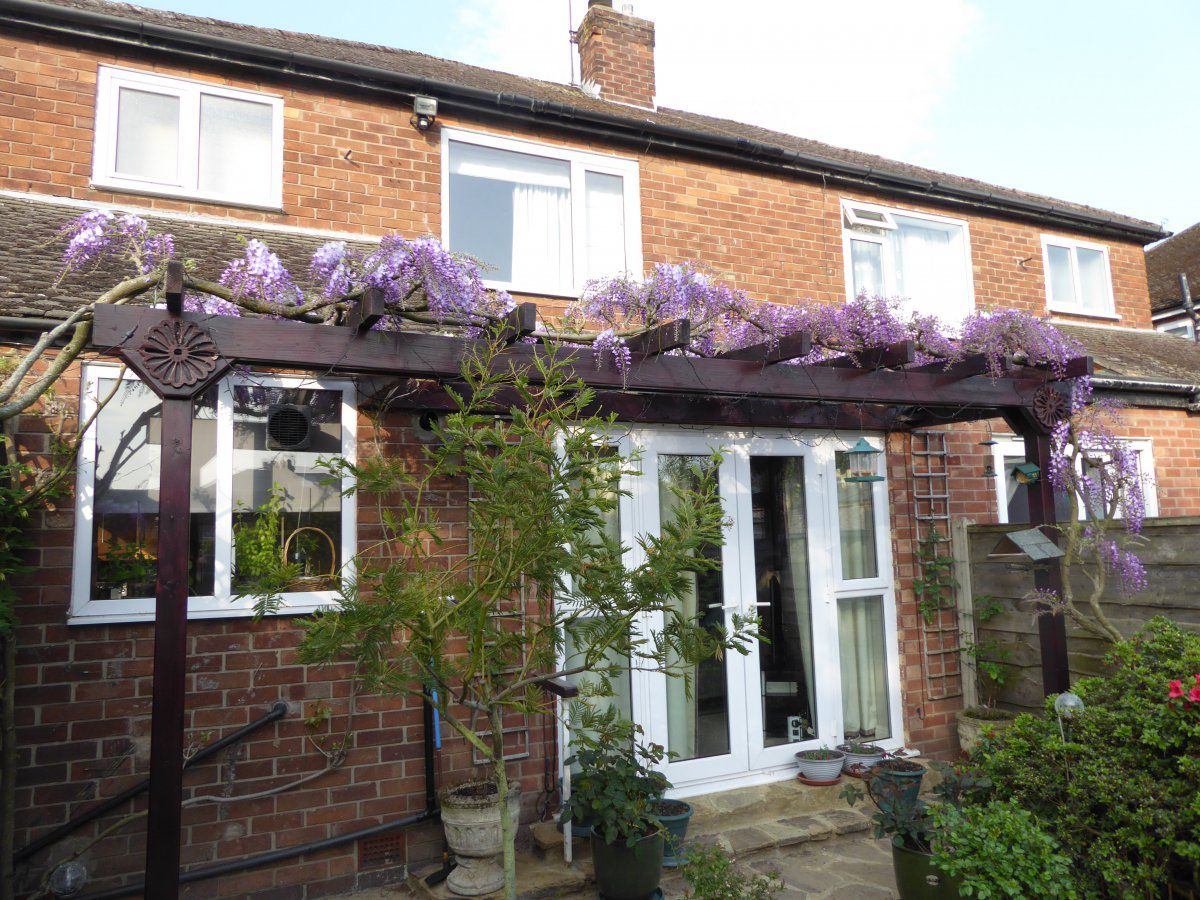 My wife says, at 79 I shouldn't be doing it. But I didn't want anyone else trampling on the flat roof as it could damage the felt. I always put a board down so that the base of the ladder isn't actually on the felt.

Despite all the rain, my cleaning and repairs to the house gutters are holding up just fine.

I bought my wife some orchids recently at M&S as it was her birthday. Orchids don't like the solid pots in which they are often sold. They are better off in clear plastic pots. Anyway, I left the empty pots on top of the refuse bins yesterday as I hadn't brought the keys to the door in the fence to get into the garden, they will make handy containers for brushes etc., in the garage.
When I went out just now in a break in the rain to feed the squirrels, I noticed there was at least 3" of rainwater in the pots. There's more rain forecast!
For any subscribers to this board who also visit Gardeners Corner, just in case anyone thinks I'm ignoring their posts on there, I regret to say because of the increasing difficulty I'm having trying to access that board, I've given it up as a bad job and won't be bothering to try again. It just isn't worth the effort.

Yesterday, I removed some chicken wire around my fruit/vegetable garden and made the garden about half the size it originally was. I just don't grow enough to justify it being the size it was. It will mainly be for growing pumpkins now. Tomatoes and peas might go to a new area.

The rest of the area I'm no longer using as a vegetable garden will now be part of my native garden.

Apart from cutting the grass, giving it a bit of moss kill and later a feed, then clearing the leaves fallen from the big acer in the garden, which tskes quite a few hours each week, I've done naff-all.
There's still all the wisteria foliage to fall, but I may "give it a hand," after a good frost.

Planted some of the polyanthus, finished planting them along the front path.
Ad

I collected seeds from my garden and immediately spread them across the soil in my new garden sections. I've got more seeding to do in future weeks/months.

Shopping to be done first, then I cut the grass and collect the leaves. The garden is sometimes a bit wet at this end, despite the soil being quite sandy as it is part of the Mersey alluvial plain.
It's not the lawn sprinkler leaking at this end, maybe there's a very small underground spring or a leaking disused pipe, as all of our houses in our road are built on former farmland and our garden is where the farmhouse was built.
Mind you, we have had a lot of rain. 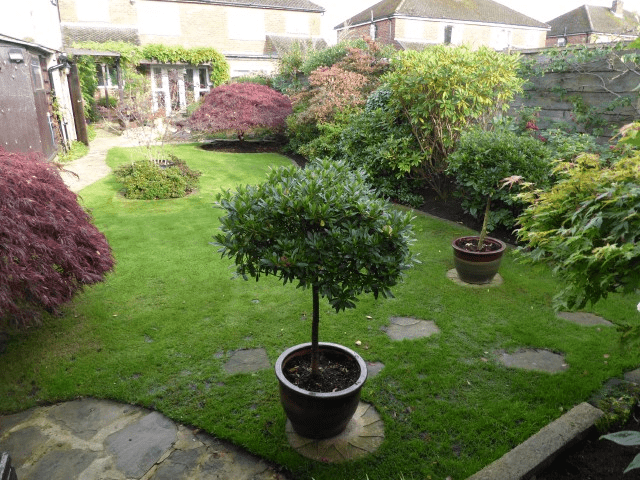 The main job was to move this Stella cherry from here...

To here.. between the azalea "forest" and the rockery. A couple of big rocks may have had to come up and then be replaced.

It'll be happier in the ground. I think it will be OK.

I removed the rock. It was just one, I needed a spade and a crowbar to get it up and my sack truck to move it. I guess it weighs the best part of a hundredweight.
I laid this rockery thirty-five years ago and I do remember bringing them all round from the road in a wheelbarrow, but this one must have taken some shifting, but I can't recall doing it.

No Idea what I'm going to do with it. I might break it up into two or three pieces with a lump hammer and bolster chisel and work it in "somewhere."

The cherry tree as I suspected, was root bound and took some effort to get it out of the tub. But it's in now. I reduced the rootball a bit to give it a better chance.

Where it is my wife can see it from her chair. It looks a bit sad now, but there's a lot of new growth on it. The blossom will be nice in the Spring.

Not a lot to do now for the rest of the year, except a lot more leaf collectiom. The wisterias are still holding on.

I would like to get a small rhodo for this gap. The big tortoise shell rhodo, I pruned back some bottom branches earlier this year as they were spreading too far over the lawn and making it easy for moss to grow. I put a retaining wire around the rest to encourage it to grow upwards rather than outwards at the front. It always loses some leaves in the Autumn but there's a lot of new growth and buds. The leaves are a pain as they don't decompose easily and it's no good blowing them to the back of the border as I do other leaves. They just have to be raked out in December.

But another rhodo might have to wait until Spring, Hopefully, we'll be going to Wyevale or Dobies in Timperley, as it is now, on Thursday, we've not been since it changed hands, I'll have a look but I'm not hopeful. We need some compost/topsoil for the five bare root roses coming from David Austin's in November. I've enough green ceramic pots for them, my wife says, "there's enough room for them on the patio and the paving over the former koi pool."

Yesterday planted up a big tub with daffodils, wallflowers and polyanthus.
It was in the back garden and I wanted to put it around the front. It was too heavy to move with the compost in, so i got another container and put nearly all the compost in it and moved the tub where i wanted it. Then put all the compost back.

Today planted up a small border with wallflowers and polyanthus.

Dug up all the cosmos in another border, they hadn't flowered at all but had very nice foliage i think that the ground had too much old compost in it. Going to plant some tulips and wallflowers there some other time, might be tomorrow if it doesn't rain.

Nothing today, (another golf day) but tomorrow I'll put the wheels back on the pot movers on our "rose patio." I took them off as when the roses were in full leaf as they could be blown over in a strong wind.
Ad

Put down plastic. I will take it up mid winter when I start to mix in mulch.

I spent some time today cutting down plants around my pond so it's ready for me to put the leaf net on when needed.

I then seeded my new native garden sections and threw the pond debris over it for a little bit of cover. 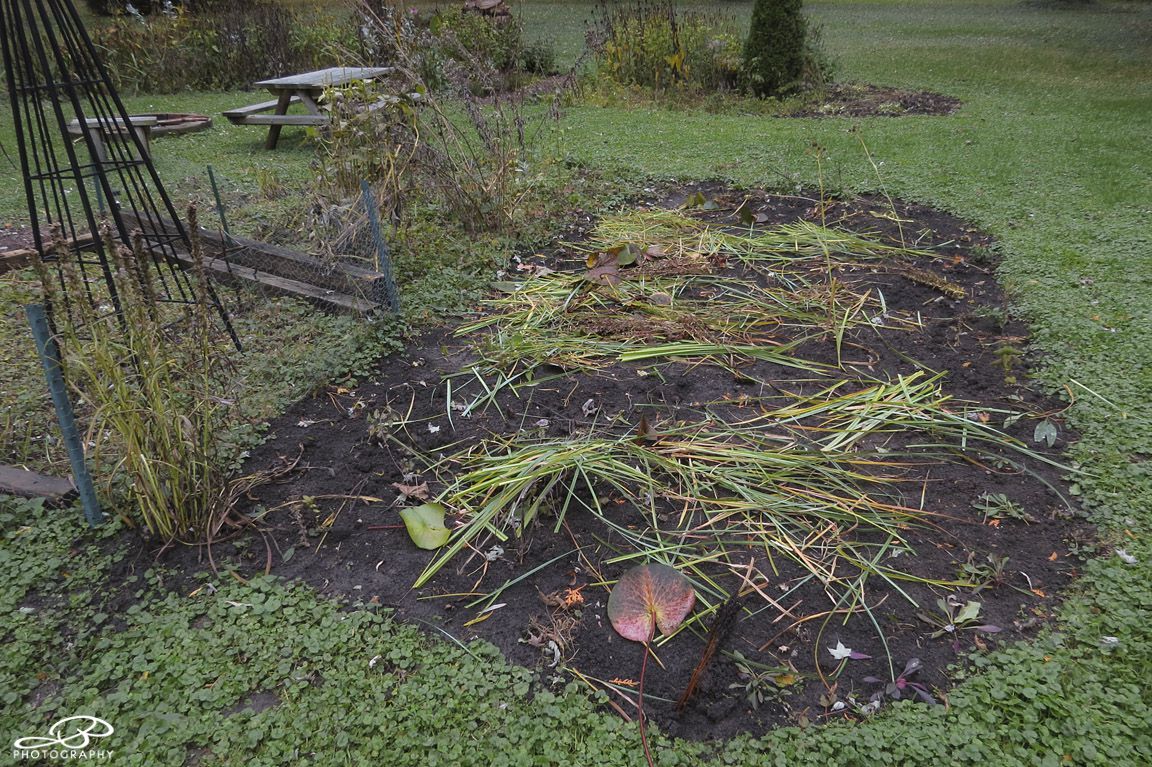 I was gifted a lovely Betty Corning Clematis the other day. she mailed it over from Ohio. She grows a ton of Clematis and cross pollinates them to make more. So anyway mentioned I had been looking for one. She said she had one in a area. So she dug it up, and mailed it. Put it in its new home right a way, nice be fat roots on it. So looking forward to it climbing along side the climbing rose . Both colors should play off each other nicely.
Ad

Didn't do anything today, the weather was dry but I needed to keep off the grass and let it dry out.
Tomorrow, I've got to sort out our plastic pot movers.

All our roses in ceramic pots sit on these. There's about fifteen of them. 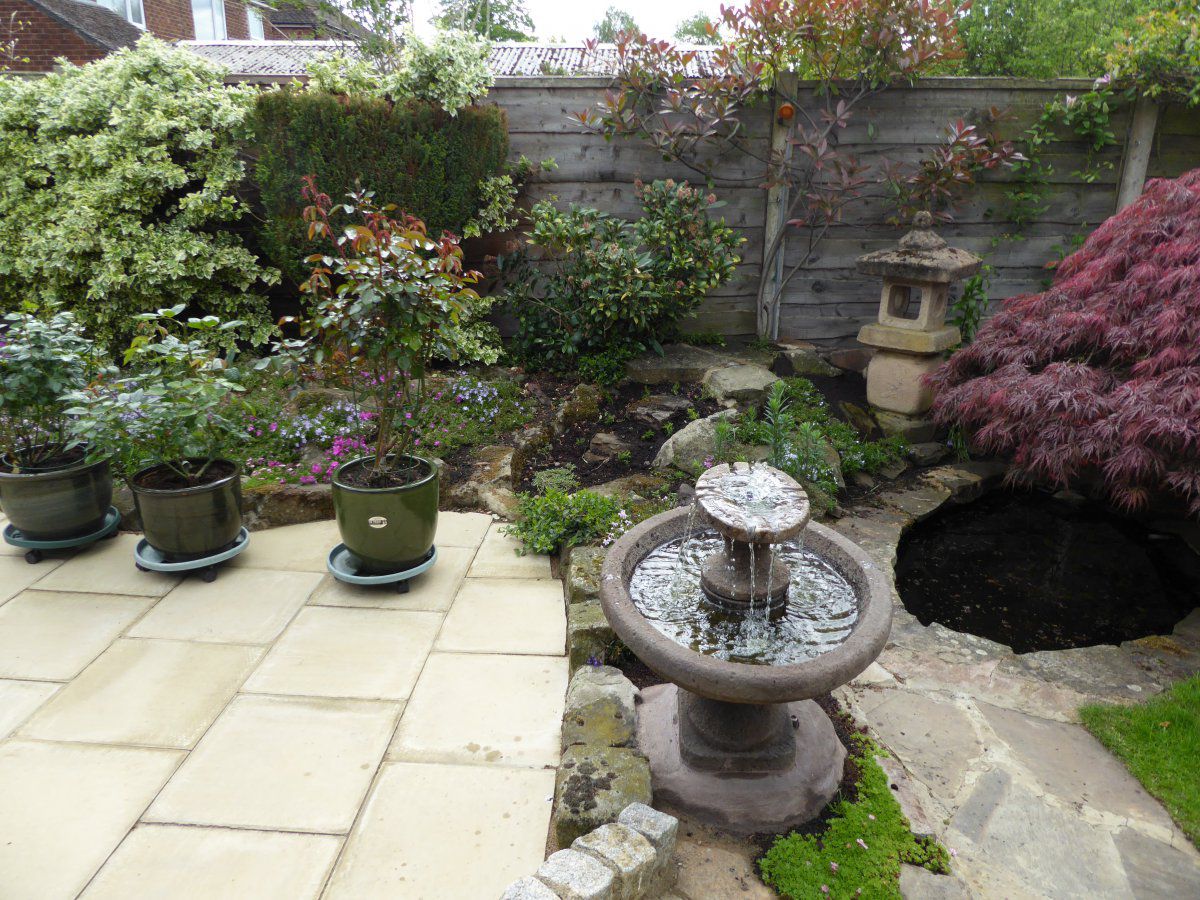 I drilled a hole through the middle of each. In the summer I put a dab of silicone over the hole, this retains the water that drains through the pot, so on hot days, there's a bit of residue in it, up to half an inch of water or so. But the silicone needs to come off now, should have done it earlier, so that the rain that fallon the pots drains out the pot mover.

The never ending task of clearing the leaves that fall from next door's trees, has began. 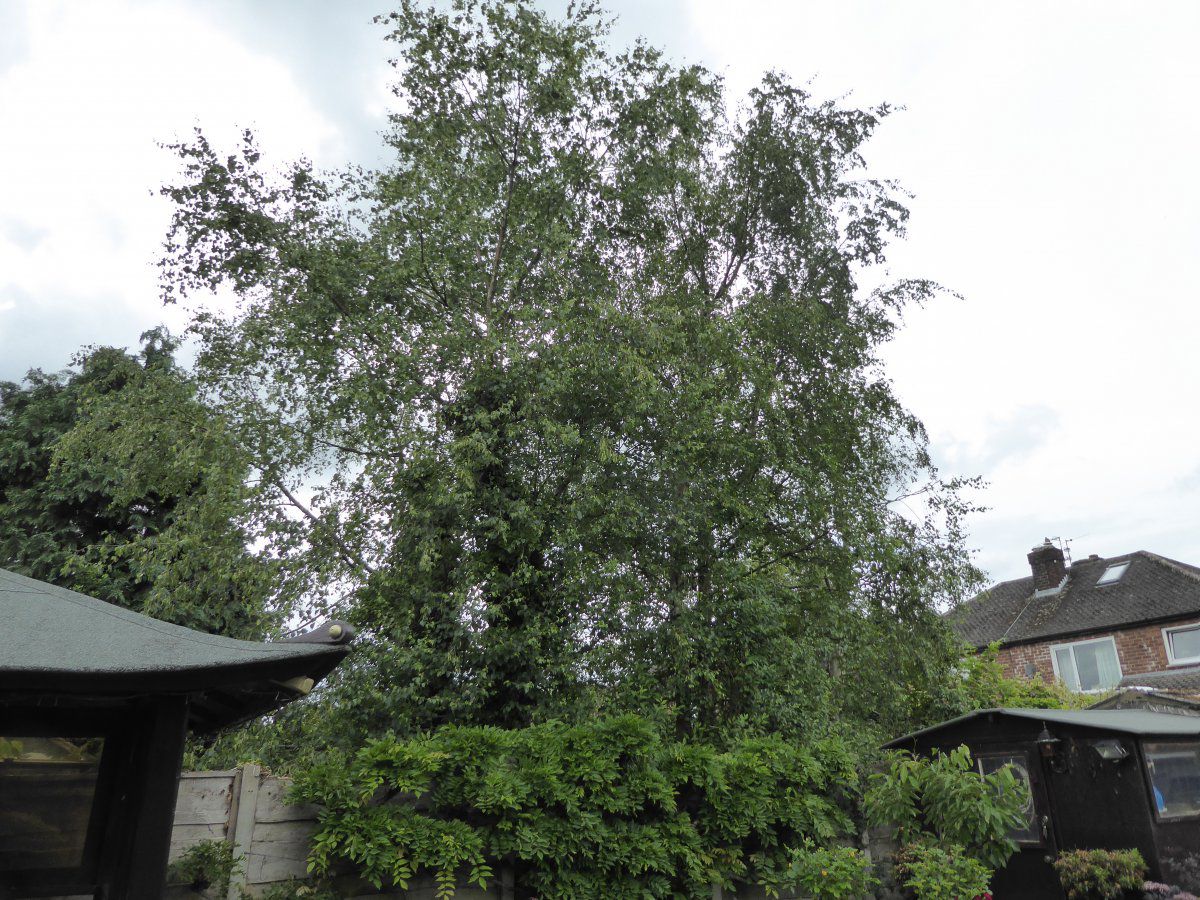 I'll have enough to do with the wisteria, but I start pruning those as they "turn." It'll be a few weeks yet.

Our acer palmatums are starting to turn that "firey red" they go before they shde their leaves, but sometines the frost gets at them before they complete the change.
You must log in or register to reply here.