Thanks MaryMary; Bron will be interested in your cats name especially when I explain why he's called Dunder. Our last cat was called Furball and we couldn't believe it when a friend asked why we chose his name the pictures I think explain why? Another cat was a ginger tom called Gino; he adopted us and we used to call him Gina until the vet enlightened us; Gino was found to be diabetic and we kept him alive for a year by taking urine samples every day then injecting him. No more cats now though for us; we were quoted up to £1,000 just for scans on Furball; now we just feed every cat around that visits and there are lots of them so we get the pleasure of their company but not the vet bills?

All our cats have been fed salmon whilst I've eaten fish fingers; I'm sure you know exactly what I mean.

Its just occurred to me the worms in the video are being treated to Cannabis mulch?

Thanks for the worm temperature information; we'd better get the electric blanket ready for them with the onset of winter? 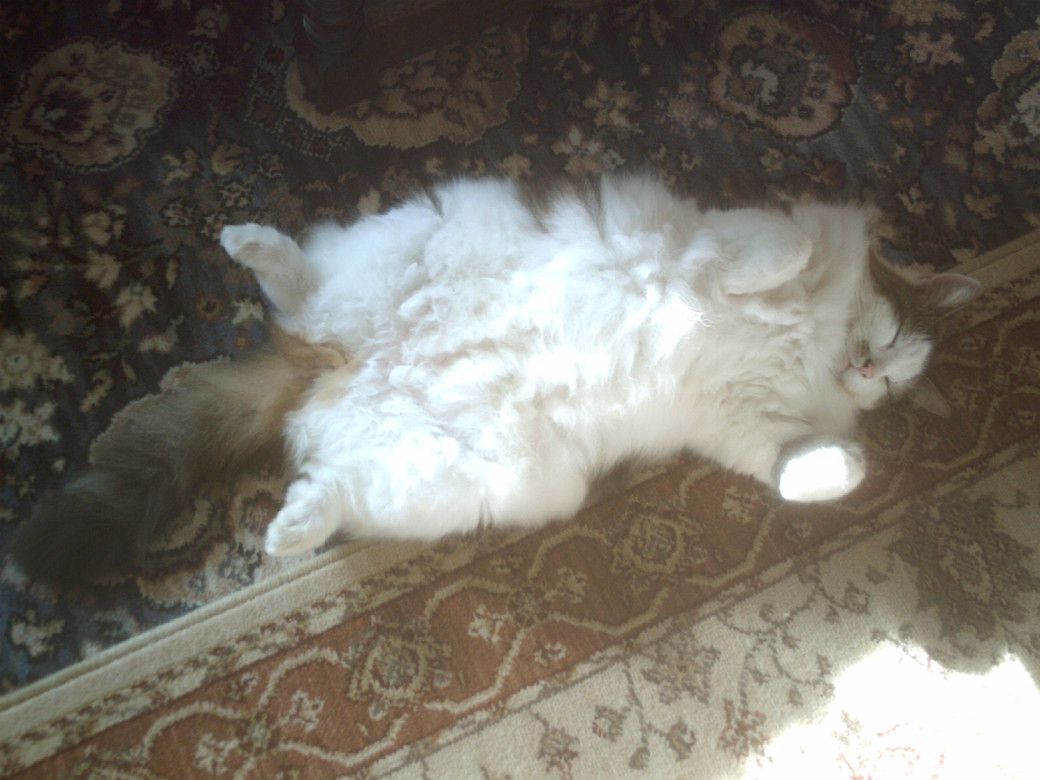 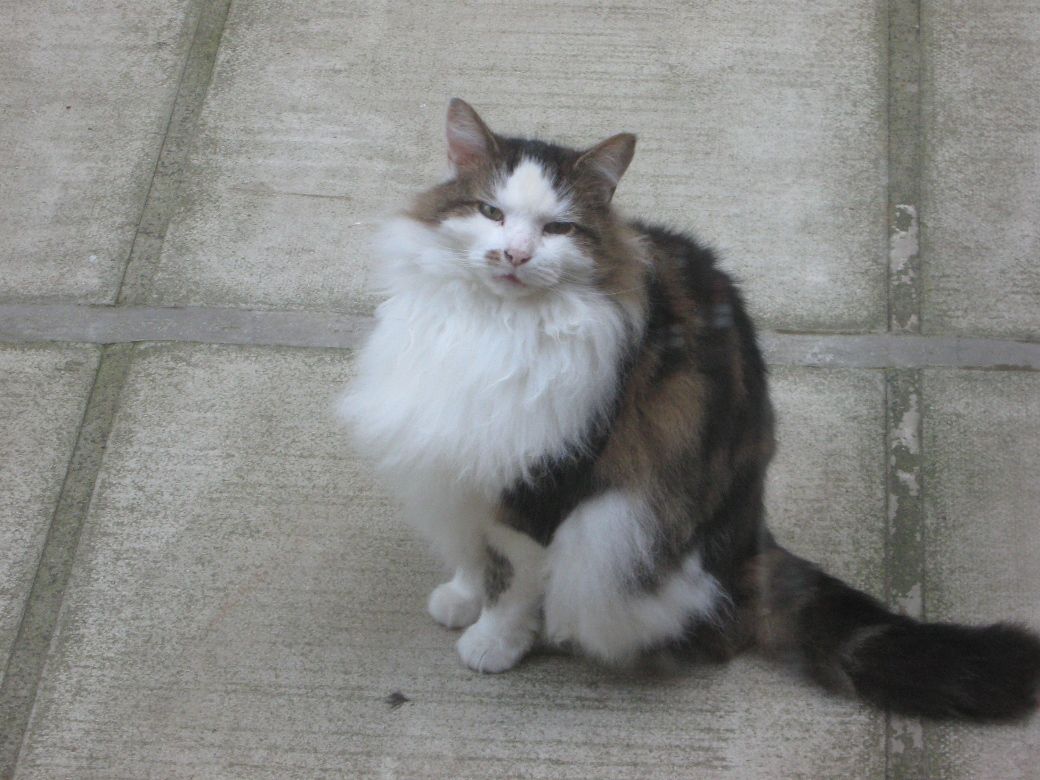 I wanted to second that you should not mix sand into the clay soil. I did some research on improving clay soil yesterday and all the good sources said that if you mix in sand you will get concrete. It will be far worse than what you have now.

Grit is probably the right word. I have chucked gypsum boards, horse manure, ground egg shells, woodchips and some green manure into my clay soil. Now the soil is much improved.
P

Alp: How much stuff did you have to put in the soil and for how long before it improved significantly?

Nearly 3 to 4 years. Every winter, I just topped it up and I really dug up the clay clods and broke them up. I should have added more bark mulch, but as horse manure has always been free. By the sound of it, you need to add water. I don't really believe in no-dig as my clay was like brick. After 3 years of digging and adding materials, the soil is now much better. But a lot of people just suggest adding cardboard on top and trucking in tons of top soil and using raised beds. The ethos is that digging damages the eco system of the bacteria and worms already living in the soil. But to me, my clay is like bricks. It wouldn't break even when I hurl it against my dwarf wall.. LOL! Believe you me, I have done it numerous times and the brick like clumps just landed on the concrete pavement, laughing at my pathetic attempts!

See if you can advertise for free bark mulch. I got some free up the road. I'm so happy and now I just let nature take its course. I also grind eggshells, oats, bananas and skins and shredded bits and bobs from my pruning and add them to my compost. But one horrible thing is that the compost from them end up with tons of weeds. It's like a nightmare. I wish I could make one of those hot compost bins so that the weeds will be destroyed by the heat. Bio-diversity is all very good. But weeds are also a sign of biodiversity. Also, a hot compost bin turns out compost much faster. Before you know, worms will find their way there once the compost is out of the bin. People say that we should separate perennial weeds from the compost bin. But I have the feeling that the weeds could be from my horse manure. So you see, what you see on the telly and what you get from reality can be quite different things.

Best is to get reduced compost as that way, you know that it has been SCREENED!
P

Thank you for that information. I have read about the no tilling idea as well. But I am still tilling the natural soil and the raised beds with a roto tiller and a mini tiller (Mantis). One of the primary reasons I do this is to reduce the cutworm population.

I don't have any critters for manure. I am using bark dust for a mulch as well as shredded leaves. And I intend to till the crops growing now back into the soil in spring.
Ad

I can sympathize with you alp regarding concrete hard clay; I have the same problem when the clay dries out which is rare; unfortunately a number of things prevent me digging over the clay introducing compost etc; the garden is steeply sloping making standing upright a challenge; the garden is big and at now 70 years young I wonder if I would ever finish digging by hand; I can't use a rotavator because it would be highly dangerous and there are masses of tree roots; the weather is usually dire; this is my excuse for being lazy. Rather than fight the clay I'm going to mulch the lot with wood chips if I can scrounge a few wagon loads; initially this will be hard graft getting the wood chips up the valley side but once done all I then need to do is to do lots of planting; I'm keen to have a nice garden in fact from our kitchen window it already looks nice but I want to try my best to improve it; at the moment I'm in demolition mode removing unwanted trees and hedges doing lots of shredding weather permitting.

I have access to lots of well rotted horse manure and brought 20 bags of it home but I don't rate it for mulching where I have to walk; wood chips are much better and friendlier to handle. I like your common sense approach to gardening alp and your replies are always most helpful.

No, @Colin You mustn't hurt yourself doing such a thankless task. You could add some bricks or or railway sleeper to even tree trunk to tier your slope and introduce flatter surface by filling the gap between you tiny wall and the slope. So rather than digging en masse, you could see if you could build in some flat surface and use the manure and bark mulch to fill in the gap. Got to be off or son will moan.

The one thing I have found that might be a clay secret is protein. Amino acids in the proteins are broken down and used by all kinds of biological life, for example bacteria make their bodies of it. Soybean meal is a relatively cheap source, at 15 bucks for a 50 lb bag, mine comes in at 47% protein. It took me a while to think it through, but its a key ingredient missing from clay, which is an old, washed out, leached kind of soil that may have certain things in it but misses whole section of other things. I have a clay called Ultisol. And its the humid envronment variety, so water flowing through it causes certain problems. Yours no doubt will vary.

Here is a good map where you can zoom into your land and see on the legend which type you may have. Wikipedia or other sources would then be of more use, once you know the name of which of the 12 types you have, and the climate sub type.

Apparently, if you go to the forest and get some soil material on the ground, it might be rich in some organisms which are vital to opening up and improving the soil type. However, be careful of what you can get from forest area, make sure no Japanese knotweed or Himalayan Balsams.

Springtails are one such organism

When a leaf falls it cannot be eaten by most animals. After the water-soluble components of the leaf are leached out, fungi and other microflora attack its structure, making it soft and pliable. Now the litter is palatable to a wide variety of invertebrates, which fragment it into a mulch. The multipedes, wood lice, fly larvae, springtails, and earthworms leave the litter relatively unchanged organically, but they create a suitable substrate for the growth of the primary decomposers that break it into simpler chemical compounds. There is also a group called secondary decomposers (some creatures, such as the springtails, are in both groups), which break it down even further.

Also have a look here

To improve clay soil, an expert said he added woodland litter to the soil (but beware what you can pick up from a wild area!) He said that woodland litter was good as it had 4 times as much fauna in it. Incorporate them everywhere in the garden. To see if this is working, you can put some jam jar in the soil to see how many black beetles you can attract. The more black beetles means the more Oribatid mites and springtails you have in the soil.

PS: Hope I have not misrepresented his ideas..

Tigsy said:
Hello! New here, but have been on another gardening forum, from a gardening magazine (that went out of business). My problem is the soil in our neighborhood -- we're on the site of an old (1940s) stock-car racetrack
Tigsy
Click to expand...

I had the problem of a lot of clay hauled in to raise the level of my property - free soil but I paid drivers for each truck load delivered. After that I was trying for a whole "raised garden" and found a place that sold bulk garden soil and bulk mulch and had around 14 cubic yards of each hauled in and dumped and I shoveled every bit of that to my actual garden area. The problem - trucks too heavy and soaked soil and a lot of that went back to filling tire tracks in the lawn.

SO, if you dig out some of the clay BE SURE that you know exactly how deep, wide, and long you want the good patch of soil to be. The 14 cubic yards of soil and 14 cu. yd. of mulch seemed a huge amount until it was spread. You might actually be better off with buying enough cement block to sit on top of the clay and fill that area with bulk garden soil. You should have better results as that soil will drain down into the clay. Good luck! Hang in and it will eventually be well worth fixing the problem.
Ad

I went out with swimming pool test strips and I keep coming in with 8ph as a probable average. I ordered 250 lbs of pelletized sulfer. I ran a separate test and in confirmed ph but I blew up the npk part by useing my ph nuetral tap water instead of distilled for the npk.

Only use a ph 7 base liquid for ph. Only use distilled for n,p,k. 2 separate liquids make the cheap tests accurate.
You must log in or register to reply here.