Due to some long overdue neglected cravings, I went ahead and purchased my first tree a couple months ago and decided to give this whole gardening thing a shot. I tried to do everything based off what I found online regarding mulch, adding nutrients to the soil, watering, etc.

The plant has nearly doubled in height and leaves are just popping up left and right. What I'm trying to determine is if I should prune some of the lower branches or not? I read you don't want branches that are growing downwards from other branches or into the center of the tree. I'm not sure if the branches in the picture warrant being cut off or not and I was hoping to get some other people's opinions. The second picture shows a branch growing really low and from behind. 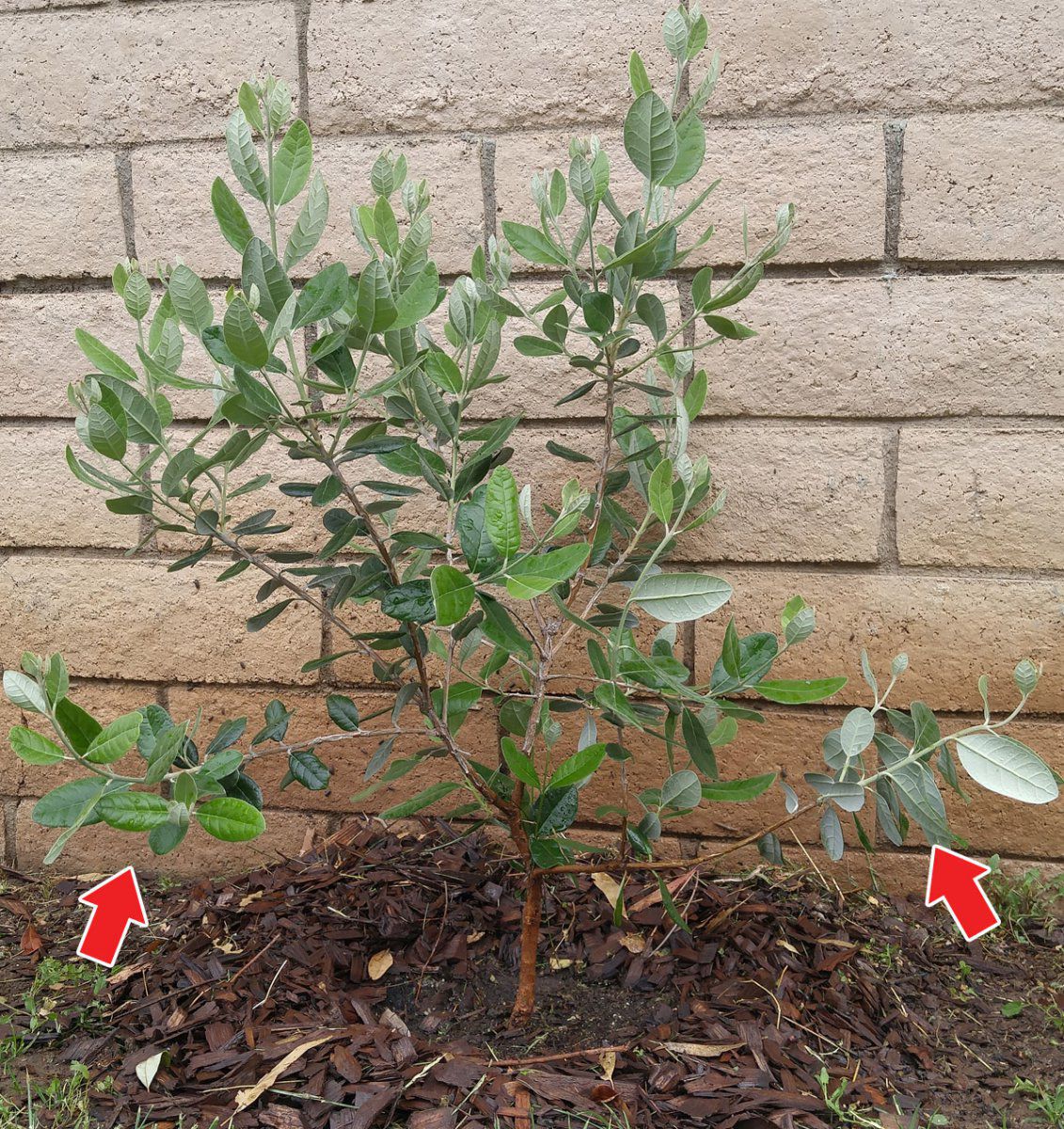 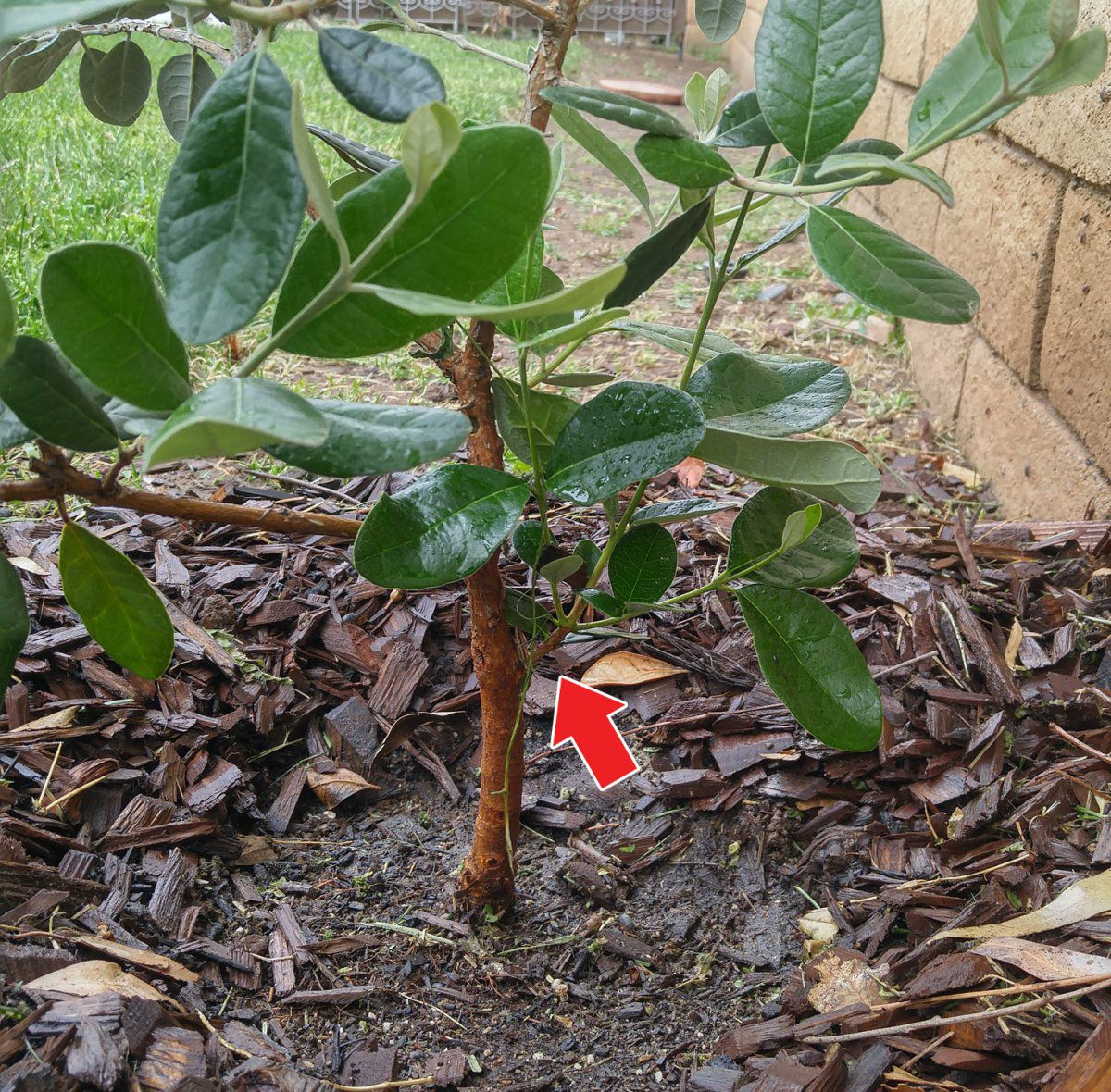 Maybe with a tree this young you don't want to trim anything since every leaf helps? I have no idea. Anyway, thanks!

P.S. Is there any good way to determine what variety of Feijoa I have? The nursery I purchased it from didn't know and I also read that some varieties do better with multiple trees planted.
Ad

Most retail nursery’s here in Australia (probably in the area of the world (USA? where you are too) have a habit of selling seedling or unnamed varieties of Pineapple Guavas, also known as Feijoas. (They are originally from South America-Brazil, Argentina? etc.) From there, in about the early 1900’s the New Zealanders (plant growers, looking for unusual and exotic fruits that would easily grow there), got hold of them and started to hybridize them and improve them (eating qualities-aromatic taste, less grainy or gritty textures, size, color, etc.) into a number of “named” varieties such as Triumph, Unique etc. They became known as The New Zealand Christmas Bush in that country, apparently, at one stage, mainly due to the fact that they flowered at around Christmas time (early to late December). (Christmas colors of red, green and white with a touch of yellow in the stamens and all that!) In the years following that (early to mid 20th century) a few Californian etc. US growers (also on the look out for unusual, exotic, flavorsome and highly portable fruits), began to grow and hybridize them further. Alexander Nazemetz was one of those (plant breeders/hybridizers in San Diego, Calif.) and a “named” variety, called Nazemetz or Nazemeta, was named after him. So basically, if you have two, or more, plants (not sure about seedling varieties, but I have several of those in my garden, in close proximity 5-6 feet (2-3 meters) away from each other and they have still managed to produce fruit)... could be because there are “named” varieties in other gardens nearby/not sure, or the fact that there is more than one Feijoa (Pineapple Guava) planted nearby to each other. Also, with the “named varieties” you will also gain a pretty good idea of what they will look like and taste like, when they do start to finally produce fruit, which can take up to three or four years. The seedling varieties (unnamed-although much cheaper in their original purchase price), on the other hand, tend to be a bit more of a lottery/unpredictable in how they will eventually turn out (large/small, smooth skinned/rough skinned, much gel surrounding the seeds in the center versus not much gel etc. Having more than one variety of Pineapple Guava/Feijoa “present” (seedling or not) i.e.in close proximity with each other, can also (apparently) influence both the size and the quantity, of the fruit produced. As for cutting out the lower branches on this shrub/bush or small tree, well it depends on what you want to do with it. If you are after a hedge formation, with multi-branching, you’d leave them on, if you are after a topiary, or single or multiple trunk formation (tree look) you’d remove them. I’ve also found that many varieties of Pineapple Guavas/Feijoas (and I’ve grown a few different named and unnamed varieties over time, in different home gardens and positions-by the way, anything less than 3-4 hours of morning or afternoon sun, in Spring/Summer and/or lack of water/moisture in this growing season and you’ll find that you’re struggling to get fruit, or any sort of quantity, or quality, of it), have a natural tendency to grow, or throw “suckers” (unruly, thin, branchlets) out of the base of the trunk anyway. Their root systems seem not to impact house walls etc. if they are grown near them (fairly shallow root systems, large shrub/bush rather than tree), so that seems to be a plus with them too!

Hope that this helps! Enjoy your growing of this fabulous plant folks! - Liz