First time gardener! Anyone able to help me identify my zucchini plant problem?

Hi there! First time posting and first time gardener this year!
I was wondering if anyone would be able to help identify what this is?
This is my black beauty zucchini plant that I started from seed back in May. The weather had been weird lately in Vancouver, BC (Zone 8B) and the warm weather hadn't started until a few weeks ago. I didn't notice this leaf looking sort of burnt or eaten through until late afternoon. It was about 30-32 degrees Celsius.
Soil is still moist but not overly wet.
I have it in a 15 gallon pot with drainage holes.
Other leaves look fine but I also noticed some leaf miner trails on a few other leaves that only just appeared today.
Does anybody have any tips or suggestions as to what I should do if there is anything I should be doing? 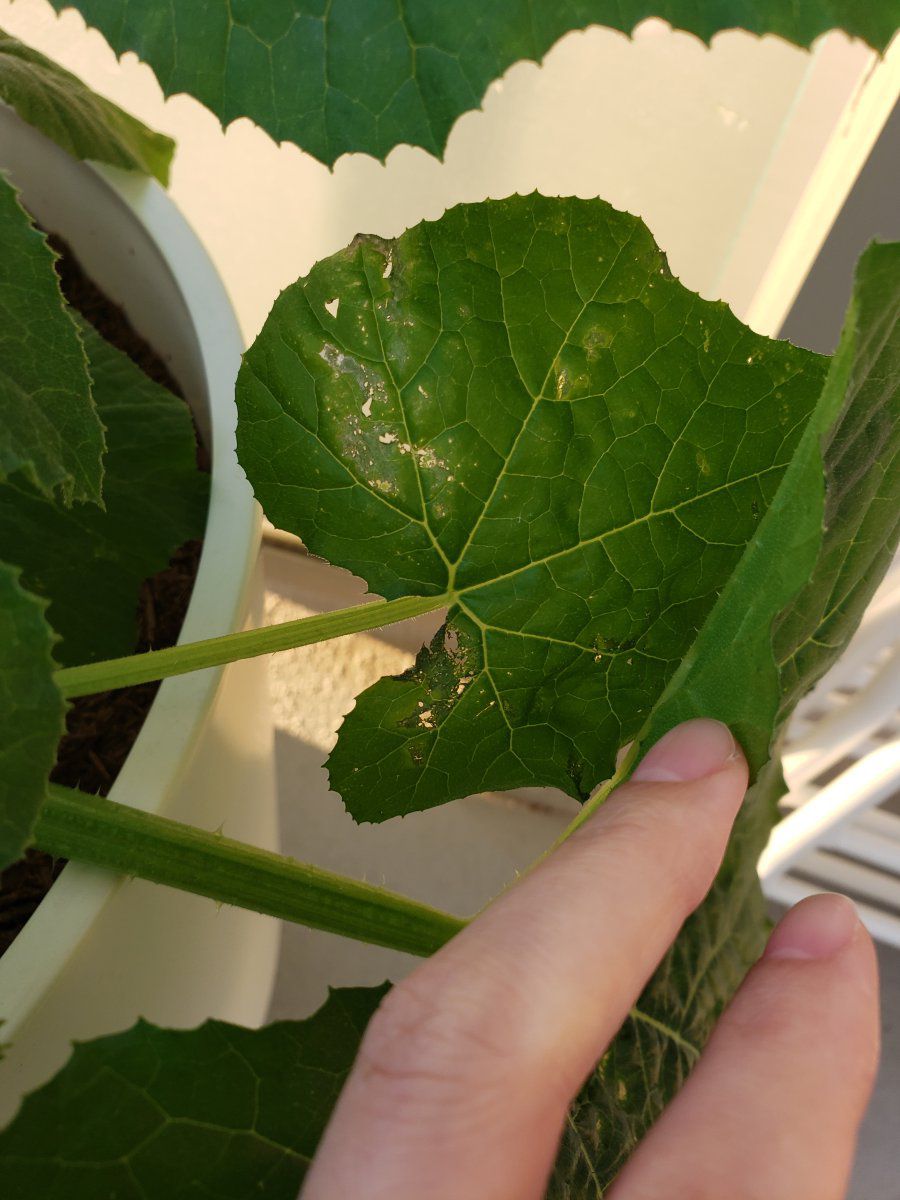 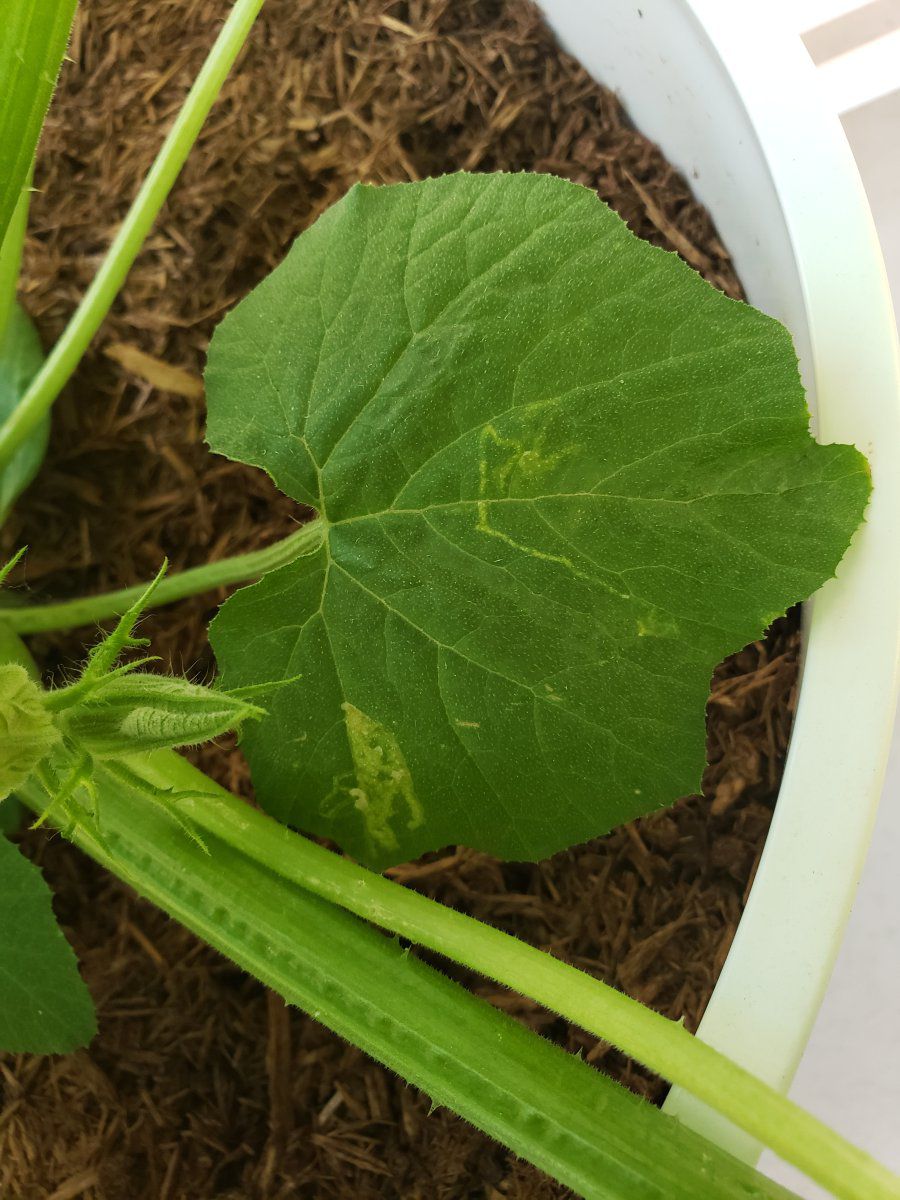 Leaf miners, yellowing leaves and such seem to be typical of my courgettes, but it does not seem to worry them too much, they still go on producing heavily and chucking out new leaves. I reckon the plant can probably live with it if you can.
I had a dark one called 'Midnight' last year, it was really good, the missus got me to grow a yellow one as well, not nearly as strong a plant, didn't produce as well, and didn't taste as good.
A

I had a small spray that has potassium salt of fatty acid and some sulphur. Sort of a soapy mix that I was using to control powdery mildew that also killed small whiteflies. Never had a problem with leaf miners on my squash or zucchini’s — broccoli and cauliflower, on the other hand…

Anyways, part of my garden was overgrown and I didn’t trim back and notice leaf miners in the broccoli leaves until too late. I was picking off and killing 8, 9 caterpillars every single day, but they absolutely stripped the thing. I decided to just let it be, though I wasn’t expecting production.

And I didn’t get any or new growth, until a few weeks later. I was confused because I basically left it to the bugs at that point. Nope, turns out the sulphur and fatty acid/soap spray had slowly nuked the entire population. I found all these black things I thought were large frass, but nope. It was tons of caterpillar corpses, shrivelled up and dead. I figure that soaking the leaves with the spray acted as a slow killing mechanism.

I’ve used this spray on my other plants to decent success, usually if I notice small isolated plant miner damage I quarantine that part of the leaf by cutting it off, and then spraying the soap. Works best early, as the tiny caterpillars eat less and die faster. In fact, the spray straight up kills them on contact when they are at the very small emergent stage.

Leaf miners tend to be moth larvae typically, and usually if you catch it early or the plant is established the damage is low, just treat as usual and production should be fine. At early stage, seedling, or heavy infestations it’s a much bigger deal and you could try my method, as well as various others as a backup as well. In my earlier example the broccoli came back with lots of new growth, it delayed production by a good few weeks but instead of having a stripped plant I chuck and compost, I let it be and it recovered relatively well

@AleDen , How much sulphur and phosphite per gallon or is that a purchased product?

Am facing the same issue with my tomato plants. Leaf miners eat the cellular layer of the leaf, can cause damage to garden plants, and can be difficult to control with insecticide sprays as they are protected inside the plant's leaves. An organic insecticide can control some leaf miners.

I personally have never seen leaf miner damage enough to worry about. It is unsightly yes, but unless an extreme infestation of them with a LOT of the leaves on a plant infested with them I wouldn't worry. And the only pesticide that will work on them would have to be a systemic, so on vegetable plants I think that would be a non-starter. A miners is hatched from a single egg onto a leaf and the miner will spend its entire life inside that single leaf. To really damage a plant to any degree, there would have to be hundreds of miners on a single plant to cause enough leaf damage to hinder photosynthesis.
Ad

Thank you everyone for the information!!