Okra leaves yellow, dry up and die, cause unclear

I started four Okra "Red 98" from seed this spring, and they were doing great in my garden until about three weeks ago. Two of the plants started showing symptoms of leaves yellowing, drying out, and falling off. I took pictures of a couple early signs of distress on 7/30 (which had already been present for a number of days): 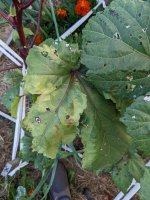 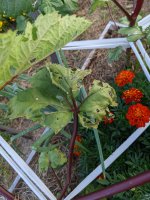 And one of the whole, more significantly distressed, plant on 8/4: 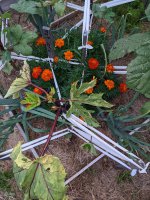 At that point it was significantly stunted compared to its healthy neighbors—maybe 6" to a foot shorter, much smaller leaves, etc.

Over the past couple weeks those two plants have basically totally died. All their leaves have fallen off, and while new ones continue to (slowly) appear, they shrivel and die before getting more than 1-2" in size. I pulled one of them today to repurpose the space and examine the roots, and they look surprisingly normal, to my admittedly untrained eye. I don't see obvious signs of rot from disease or overwatering—though I do wonder about those white spots just below the former soil line—are they a concern? Here's the whole plant from top to bottom (taken last night, 8/15): 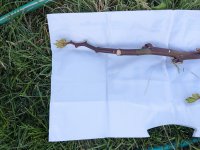 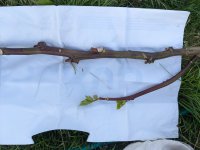 If that were all, I'd be sad but not too upset—the other two plants are more than productive enough for my needs. Unfortunately, 4-5 days ago I started seeing the same early signs on one of the healthy plants. Here's a couple leaves that are just starting to show the problem: 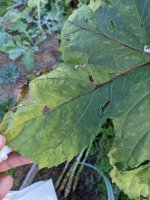 And a couple that should look awful familiar from the first two (though these have progressed a bit further yet): 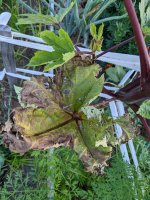 So here's the thing. I did all the usual Googling of Okra diseases and pests, even asked my local cooperative extension office, and nothing is quite right.

Most environmental factors seem unlikely simply because there are four plants right next to each other, yet one is totally fine, two are completely dead, and one was fine until recently and now is starting to have issues. But in any case:
Pests or (particularly) diseases seem like the obvious guess, but:
So! I'm completely stumped. Any ideas?
Ad

I have verticillium wilt in my soil and my clemson spineless okra leaves look different that what you posted. The leaves and stem aren't more damp as I can just snap them off cleanly at the main stem with my hands when they yellow. Not every leaf will yellow (seems to alternate) but it does work its way upwards. I still get a good okra harvest. You can cut the main stem close to the root and look for brownish veins. That is verticillium or fusarium wilt. Sometimes you have to keep cutting closer to the root to see it.

I have had southern blight on my peppers and it looks like little white balls and white spider webs near the soil line on the peppers. Maybe okra looks different but I still had a good pepper harvest. I haven't seen southern blight since I sprayed the soil with bleach which was years ago.

What you have might be bacterial or viral from the bug bites.
D

I heard back from my local extension office after sending them the pictures of the roots. They think the little white spots just below the soil line are from southern blight—apparently it doesn't always cause obvious wet rot, at least not quickly. I'm inclined to think they're right, so, mystery solved, though there's nothing I can do this year.

I used to build my raised beds out of only compost, so 4-5" of that on top of the native soil. I stopped because the native soil was looking pretty darn good on its own, and my garden was slowly getting taller than all the neighbors, but I'm thinking I may want to go back to that to control soil-borne diseases like this. I might solarize the plot in the fall or early spring, too. Too bad for this year, but I'm hoping I can do a lot better next year.

One thing about okra: The best temperature for okra plants is between 75- and 90-degrees Fahrenheit (18 degrees to 35 degrees Celsius).

I noticed your nighttime temps are currently averaging about 60 deg. I can't grow productive, healthy okra at that temp.

The white rots are a sign of over fertilization and lack of air to dry surfaces like root flares. Southern blight is in this universal group of composters. To much food and too much water in the wrong place. Better to ease back the composting to fully composted material and simply yell "grow dammit!" rather than physically adding more. I have read that organic materials past 30% contribute to yield losses. The white rots are all inextricably related to oxygen, and exist in the top oxidation layer. Inverting the soil can choke them. Bagging them can choke them. Ironically, they are also very much a contributing component of the process by which humates are created. Compost from the bottom middle of an old pile is less likely to contribute spores of the several Southern Blight fungi than the outer or fringe layers of a pile.
Last edited: Aug 18, 2022
D

Meadowlark, I wondered about that too the first year we tried growing it. You're right that low temps slow it down, but they don't seem to hurt it. My plants looked very healthy until they started showing blight symptoms, and I was getting a pod every few days from each plant. Now, I've seen pictures of plants with close to a dozen pods within a day or two's growth of each other—if that's what you mean by "productive", several pods a day, I suppose mine don't qualify, but I treat okra as a supplemental thing, so I'm fine with a modest yield.

DirtMechanic, this year I haven't fertilized at all, and I haven't added compost to the soil in a couple years, which is part of why I'm thinking of going back to it next year. All compost I have added has been municipal compost, which...well, I wish they left it an extra year to get rid of the little sticks, but I haven't seen any un-composted soft vegetable matter, and they should be regularly turning the piles such that everything spends some time in the center. I'm going to explore other compost providers in any case, as the city has been doing an increasingly poor job keeping rocks out of the compost—we'll see how they do in terms of uncomposted sticks. As for water, it's possible that the soil is remaining too wet—I don't think I'm over-watering, but we have had a couple periods of lots of rain, moderate temperatures, and limited sun—but if so, I'd expect compost to help by improving drainage. Indeed this is again one of my reasons for going back to it—I've been having damping-off issues with seeds that I don't remember being so severe back when I was adding compost regularly.

Does that change your thoughts at all? And, when you say "lack of air to dry surfaces like root flares"—I can think of a couple things that might affect this and wonder what you think.

When I transplanted them (after starting indoors), I think I buried them a little deeper than they originally sprouted—with the surface of the soil block 1/4-1/2" below the surface of the surrounding soil. I know tomatoes almost prefer this treatment (and will sprout additional roots), and many other plants seem to be indifferent, and it certainly helps with wind resistance early on, but is it a problem for okra?

I use thick mulch wherever I can, and okra seems like a perfect candidate because it grows tall very quickly. I have heard that it's best to keep mulch back an inch or two from the stems of plants—is this likely to be particularly important with okra?
Ad

The low temps and blight may be complementing each other.


daniels220 said:
Meadowlark, I wondered about that too the first year we tried growing it. You're right that low temps slow it down, but they don't seem to hurt it. . Now, I've seen pictures of plants with close to a dozen pods within a day or two's growth of each other—if that's what you mean by "productive", several pods a day, I suppose mine don't qualify, but I treat okra as a supplemental thing, so I'm fine with a modest yield.
Click to expand...

I get spoiled in the south where the okra is so productive you have to cut multiple pods every day or the pods get so large, they are unusable.

A modest yield isn't bad at all in fact very good as far North as you are. It's certainly worth growing.
Ad

If you suspect drainage issues then a simple hill row planting will be very illuminating. Anything from a few inches above the common plane helps. Disturbed earth\compost settles so make it higher than you will end up with in a few months.