Last week, I went on a three day camping trip to Point Beach State Forest along the Lake Michigan coast. I've been going there since I was about three years old. I was excited about going, since I haven't been there since 2015. The area is filled with nature and history.

The first night there, I went to the sand dunes along Lake Michigan and found a group of deer. There were four or five in total. 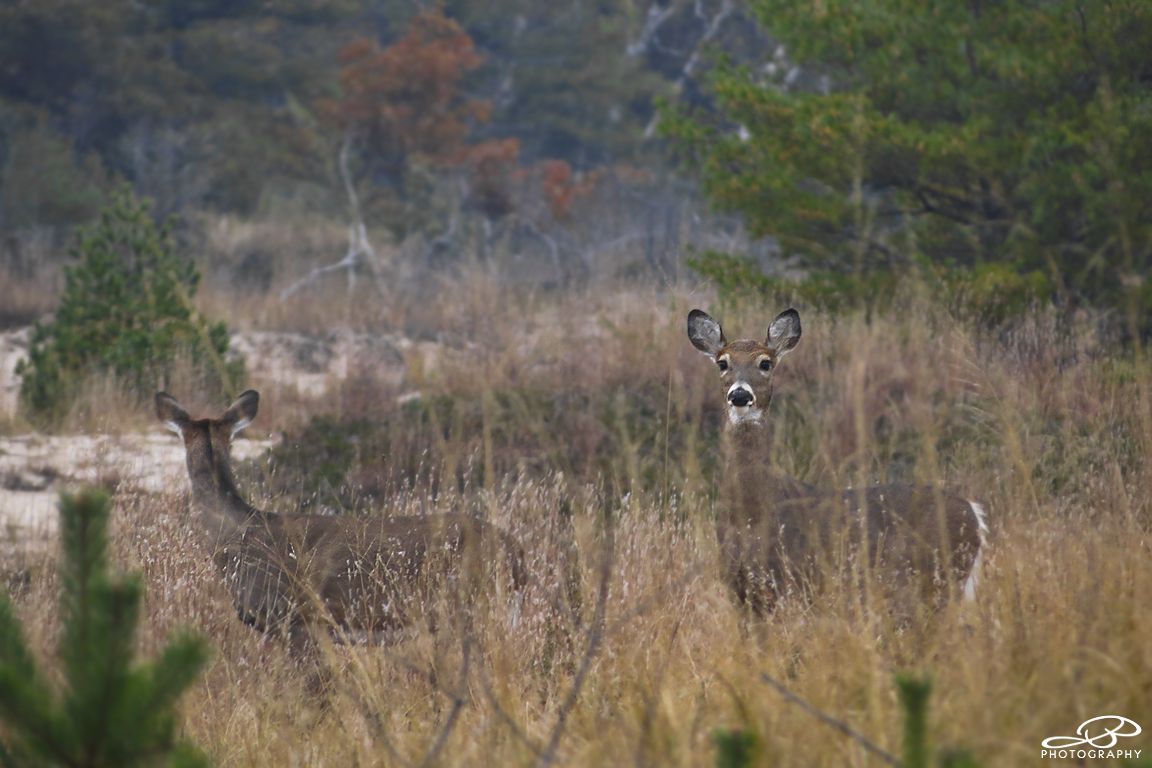 One of my favorite things to do when camping here is to search for salamanders. The area is perfect for amphibian life. The forest is filled with vernal ponds, which many amphibians need to breed in. There was more water than usual this year. The area must have seen quite a bit of rain. 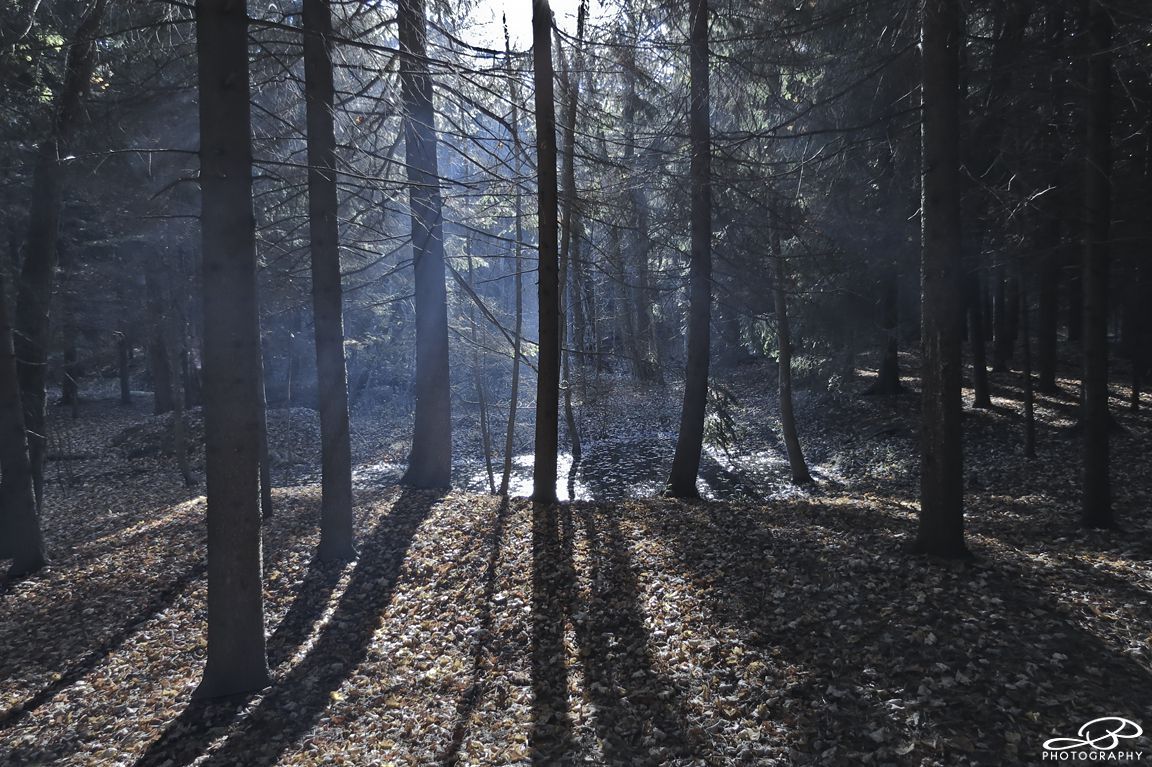 Salamanders are found by flipping over fallen logs, bark, and rocks. I found quite a few salamanders over the span of three days. Blue-spotted salamanders are the most common. I probably found a dozen or so. 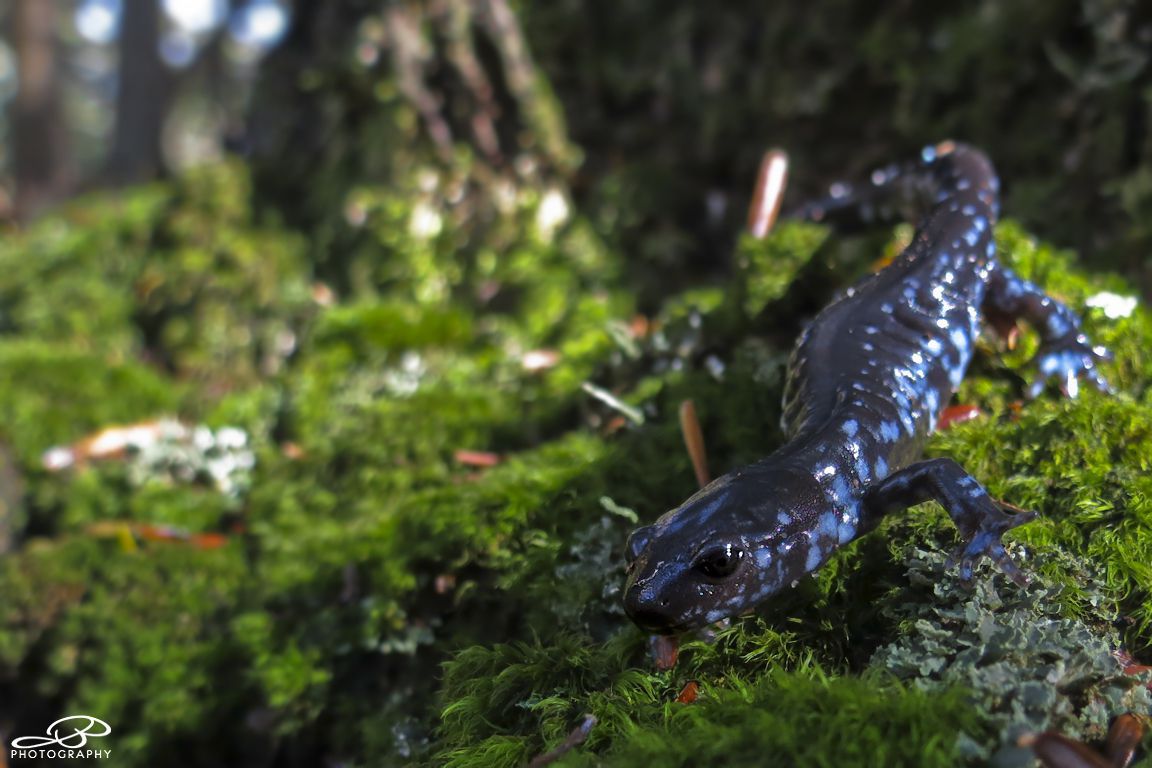 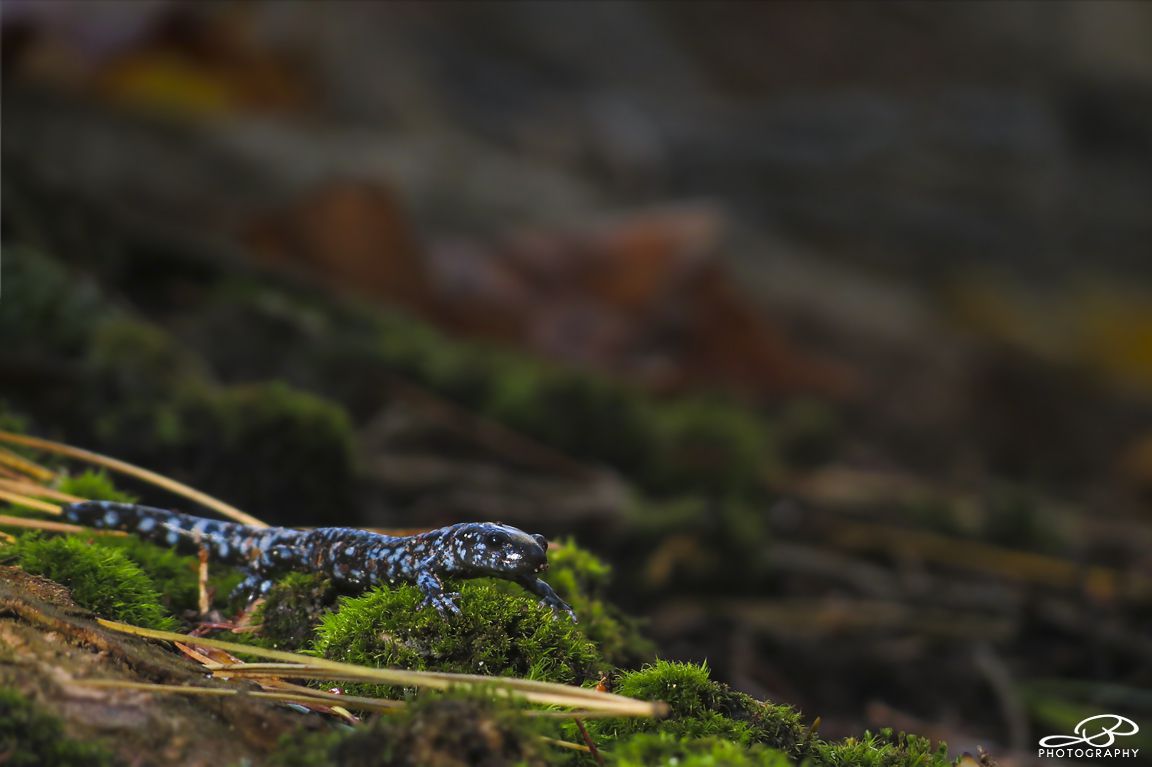 Red-spotted salamanders are the next most common specie I find. I see a few of them on each trip, including some that have only been an inch long. 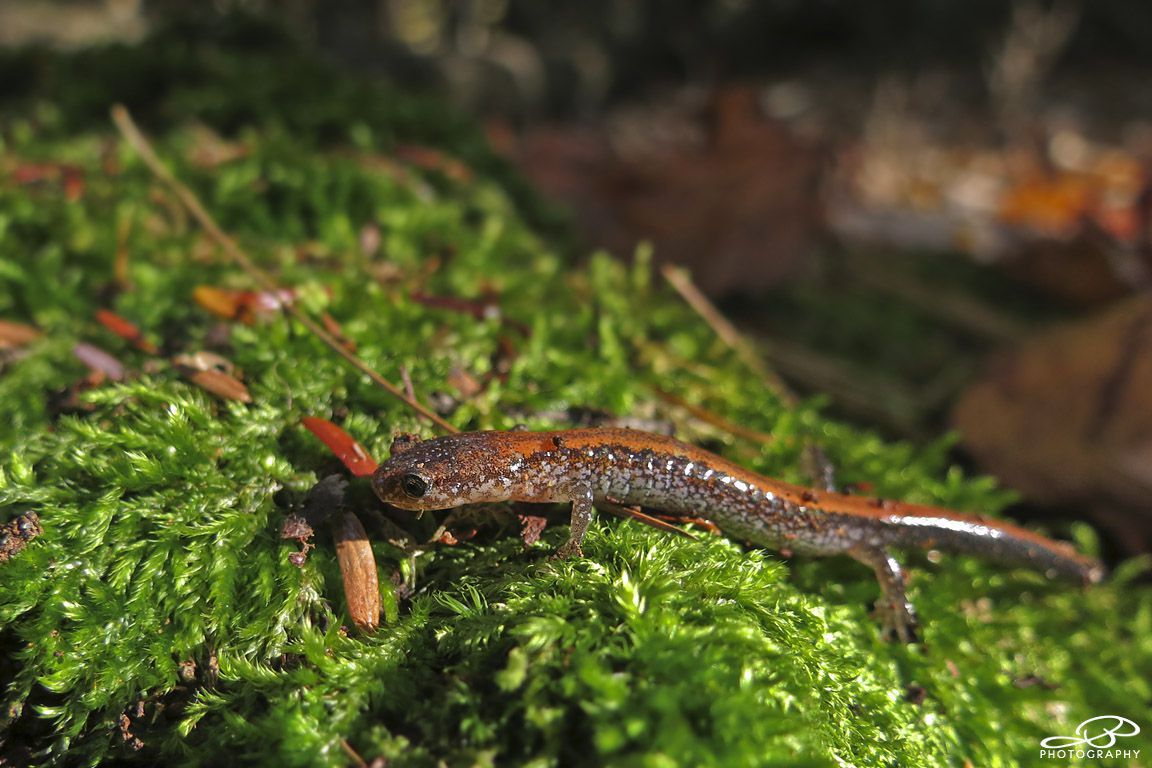 Spotted salamanders are the most difficult to find of the three species I've found in this forest. This is only my third time finding one, and it was under one of the last logs I flipped on my vacation. 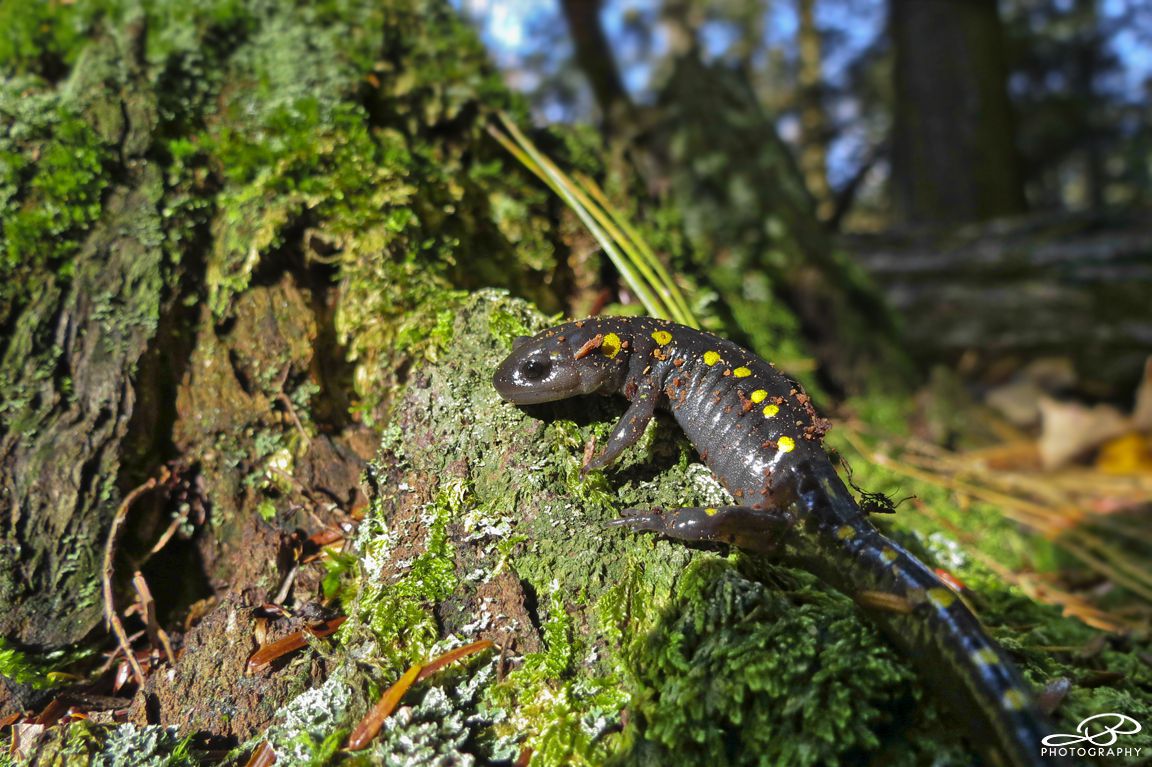 At one point, I flipped over a fairly thin piece of bark and expected not to find anything. Instead, I found a Wood Frog hiding in a small hole in the ground. This is only the second Wood Frog I have ever seen, and coincidentally just feet away from the first one I found, three years ago. 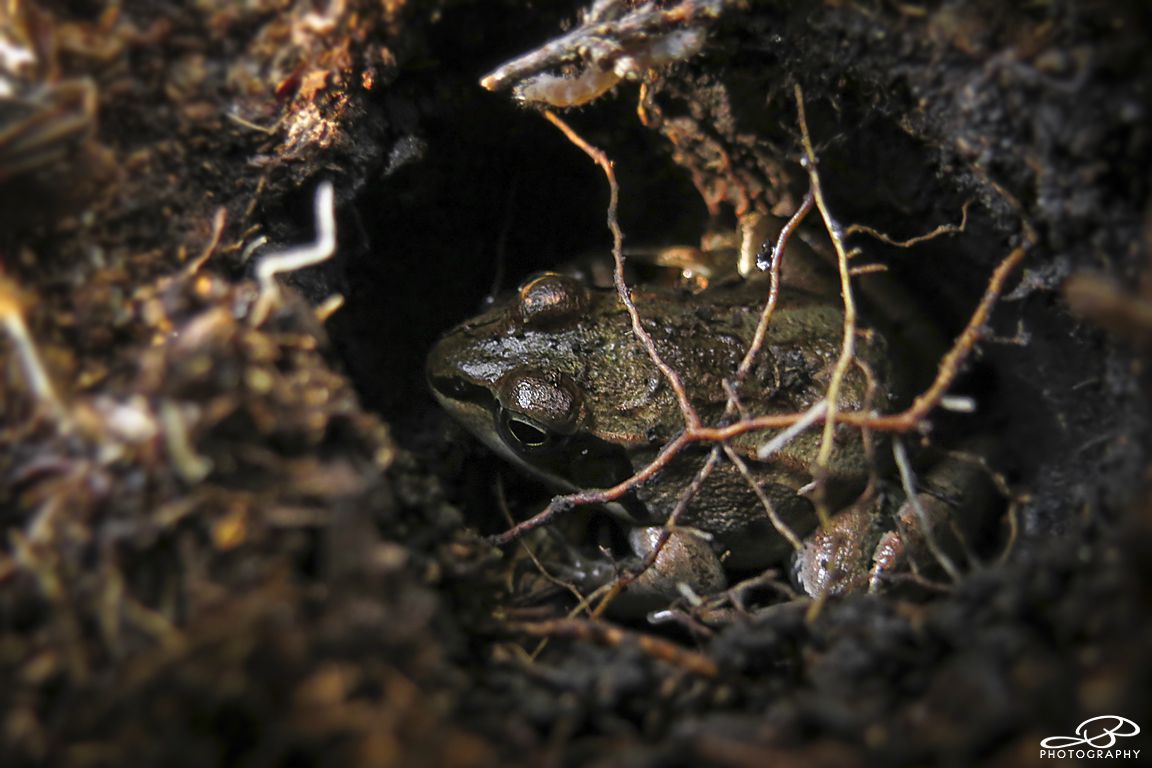 Another cool thing to find in the forest are all the different kinds of fungi that grow. So many different shapes and colors. I especially liked this orange one growing out of a rotting log. Rotting logs help to create a complex ecosystem, and it's one of the reasons I often tell people to keep fallen trees and logs in their yard. You can often be creative in placing them around the garden. 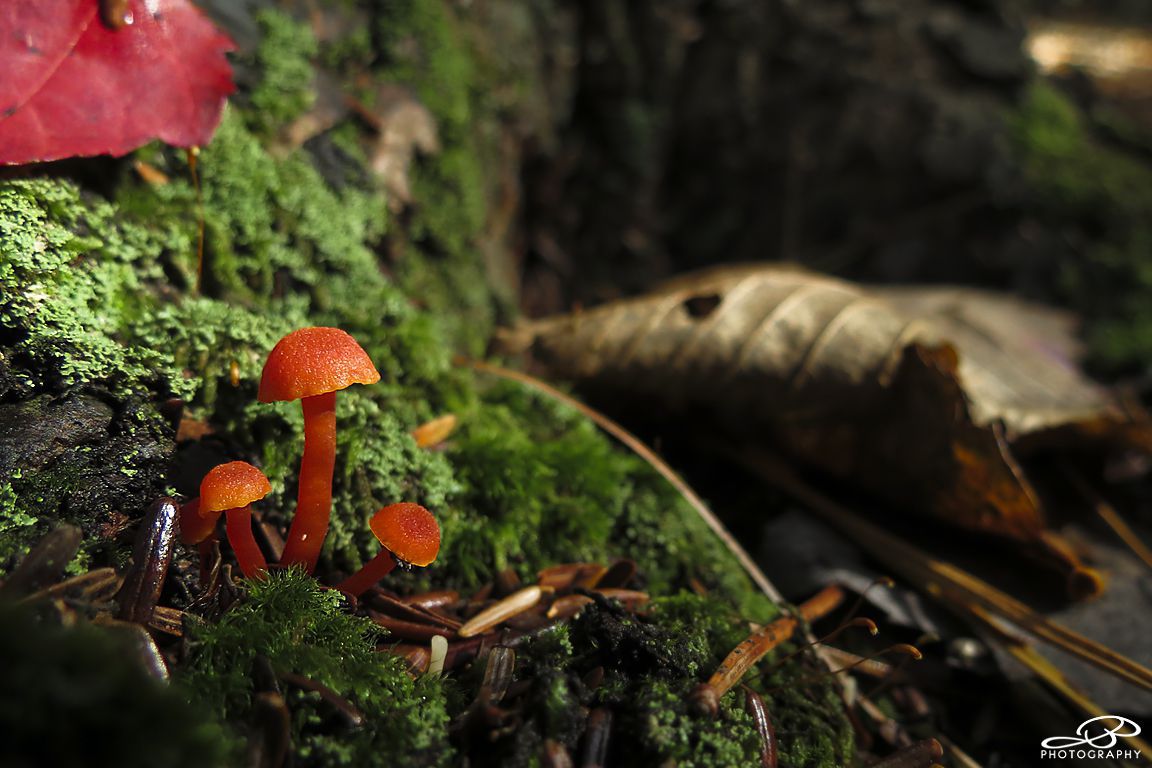 Another one of my favorite things to do while camping in this forest is waking up early and walking to the lake to catch the sunrise. I missed the sunrise on the first morning. The forecast called for clouds, but it ended up being sunny. The second morning turned out to be the best sunrise. It was cloudy, but there was just enough clear sky to allow for a fantastic show! 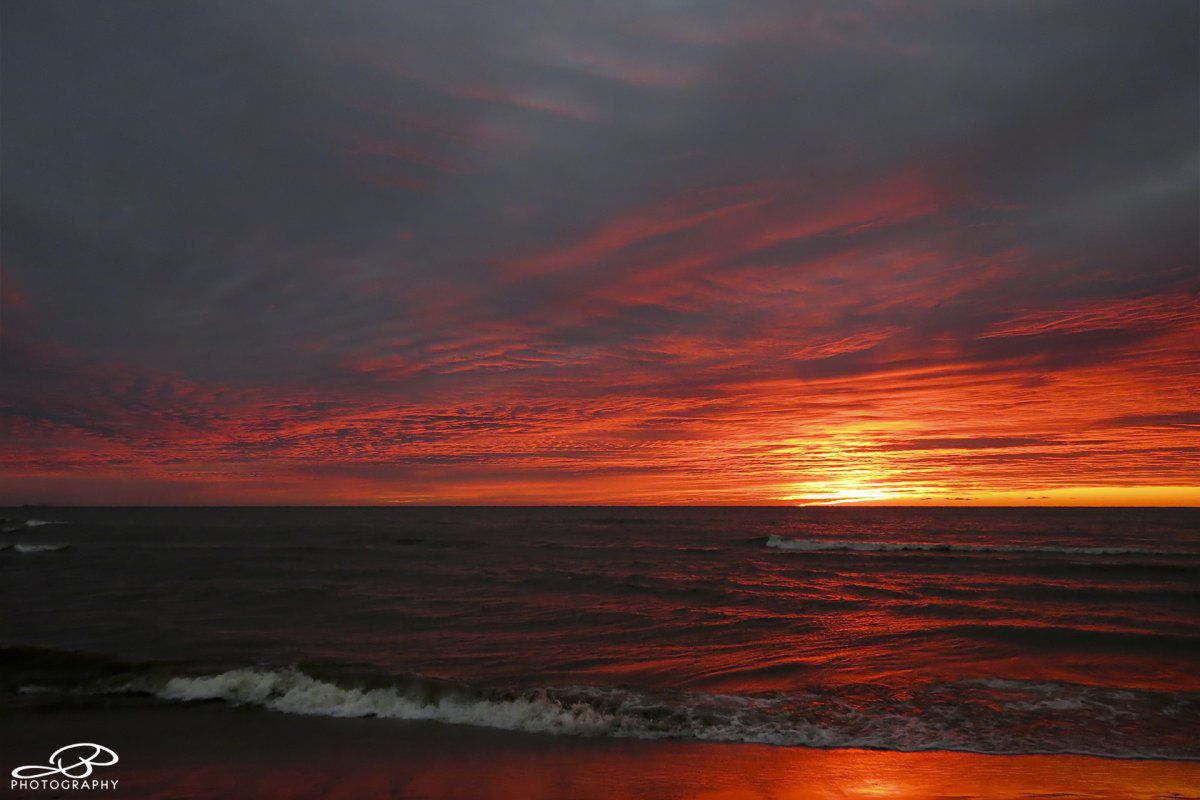 Here's some video I took of the sunrise that morning.


I've taken this next shot many times over the years. Unfortunately, there's now a big sign in the way of what used to be a fantastic scene. It's a "selfie stand". I'm not too happy about it, as I prefer to leave nature as natural as possible. Less man-made things, more nature. 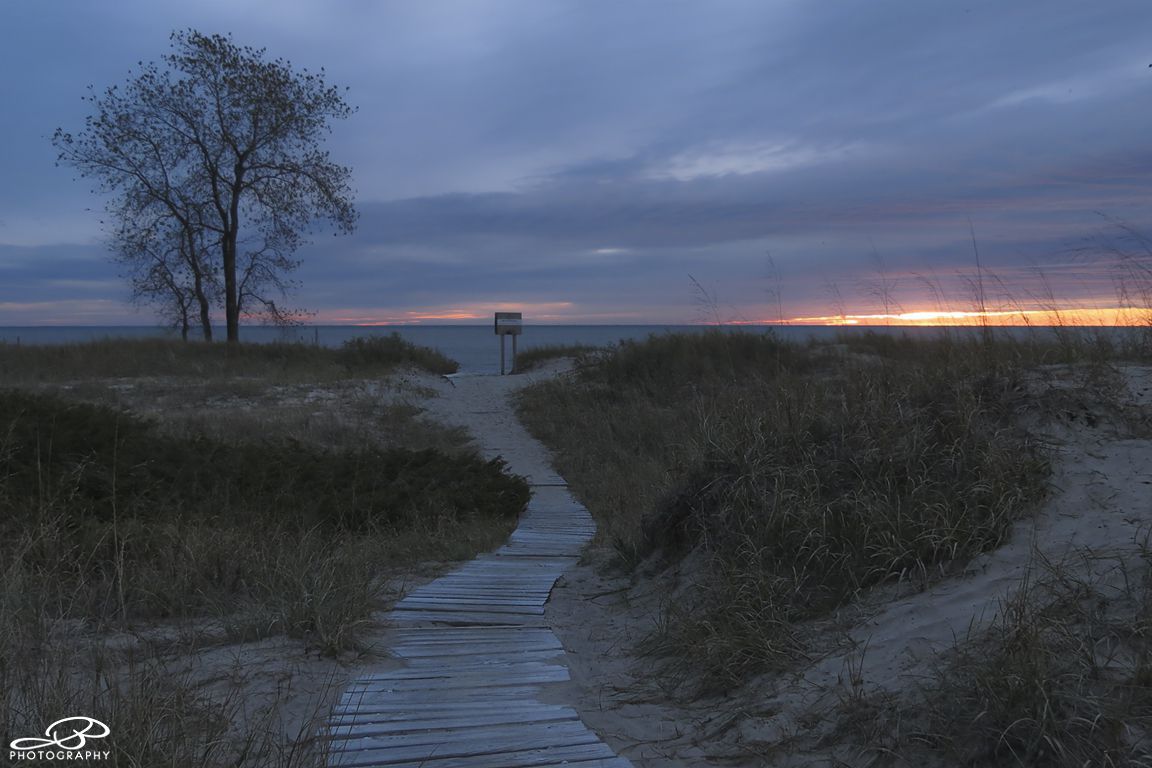 There are a lot of ships and barges that can be seen in this area. I saw about eight or nine on this trip. I especially liked the one that was going by just before sunrise. 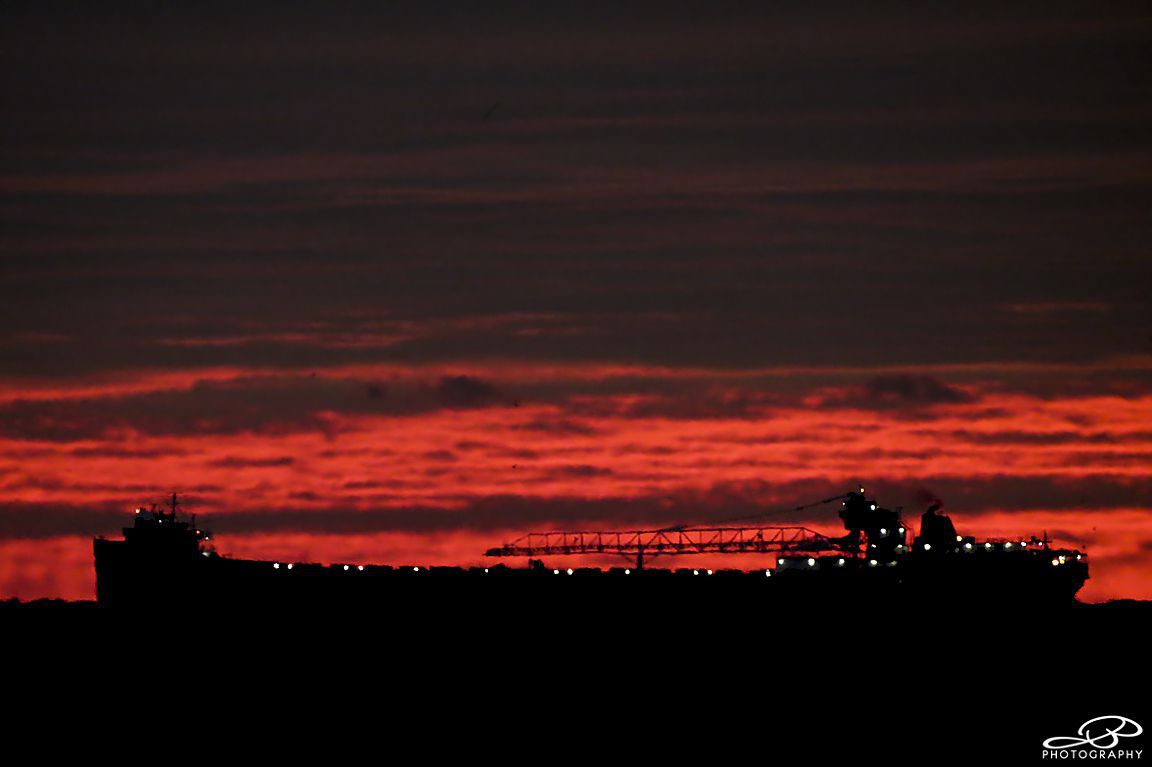 Later that day, I saw the Edwin H. Gott, which is a huge freighter, over 1000 feet long. 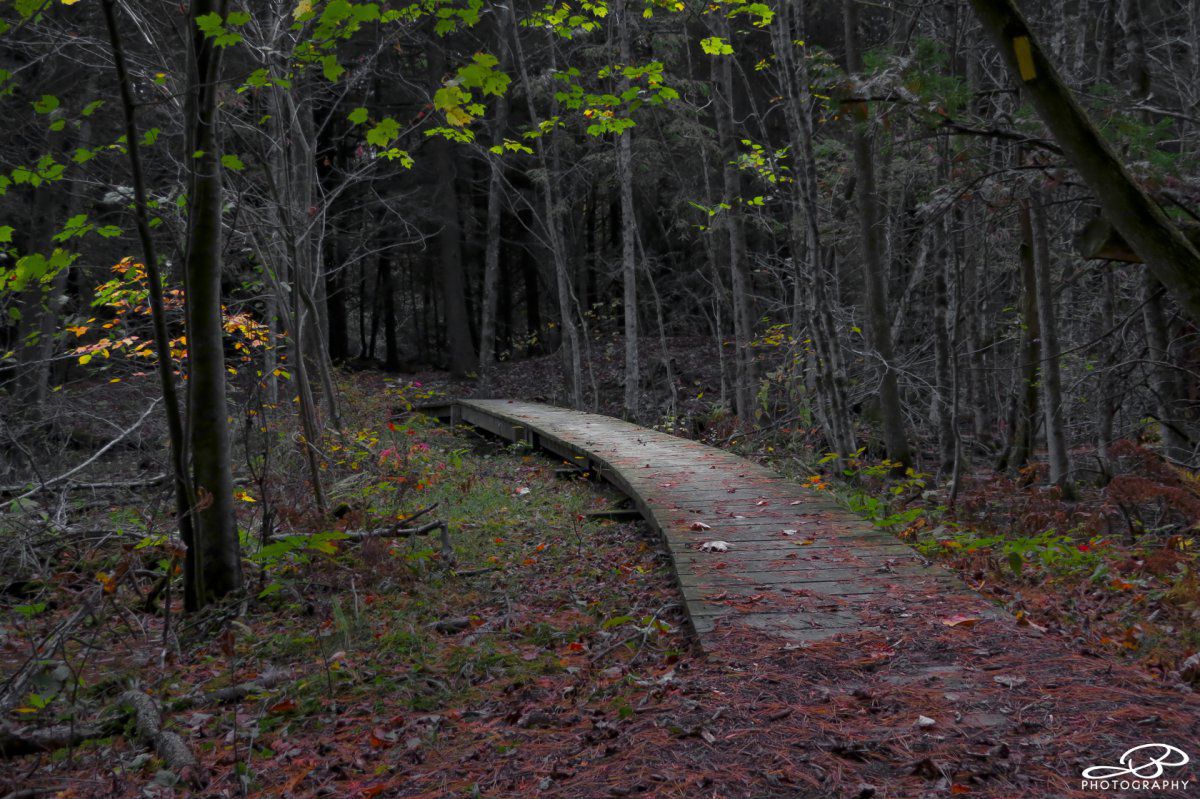 The trail followed the previously mentioned creek, which got considerably larger than I expected. The creek ends up turning directly north and heads away from the trail, while the trail turns southeast. 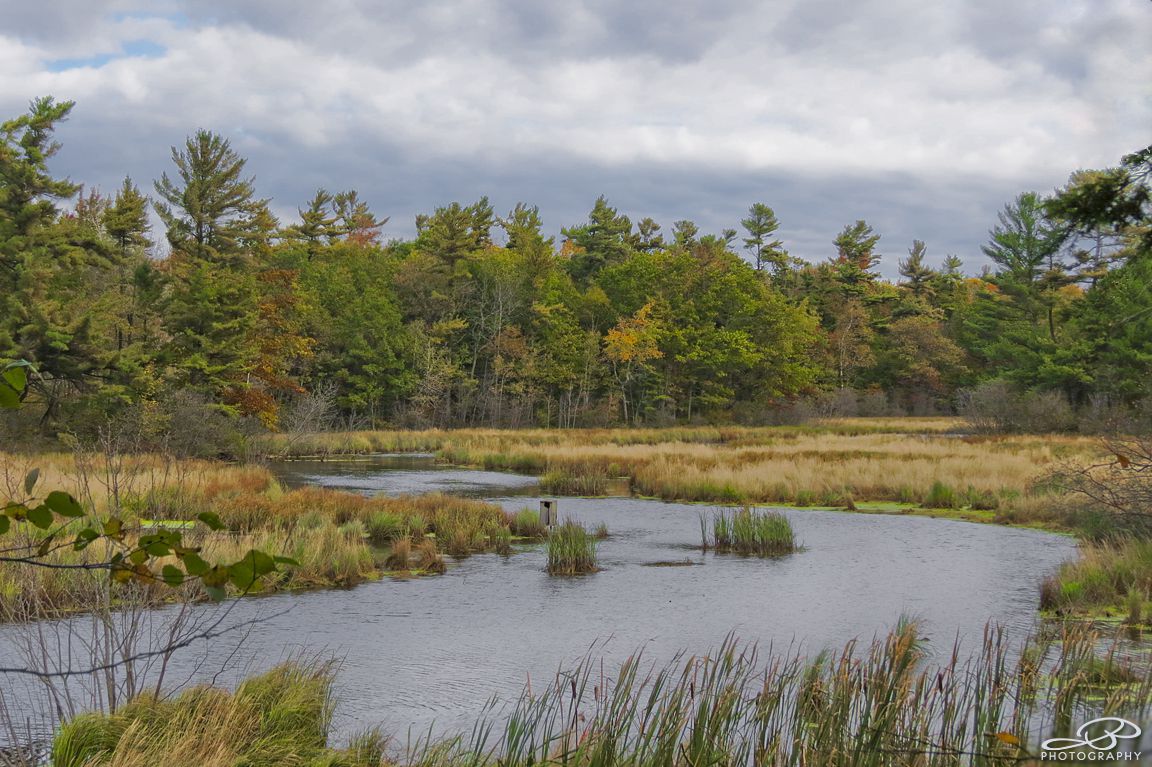 Eventually, I found a cut-off trail that led to the sand dunes. I walked down and had to look back to take this cool shot. It doesn't quite capture the true height of the dunes and trees. 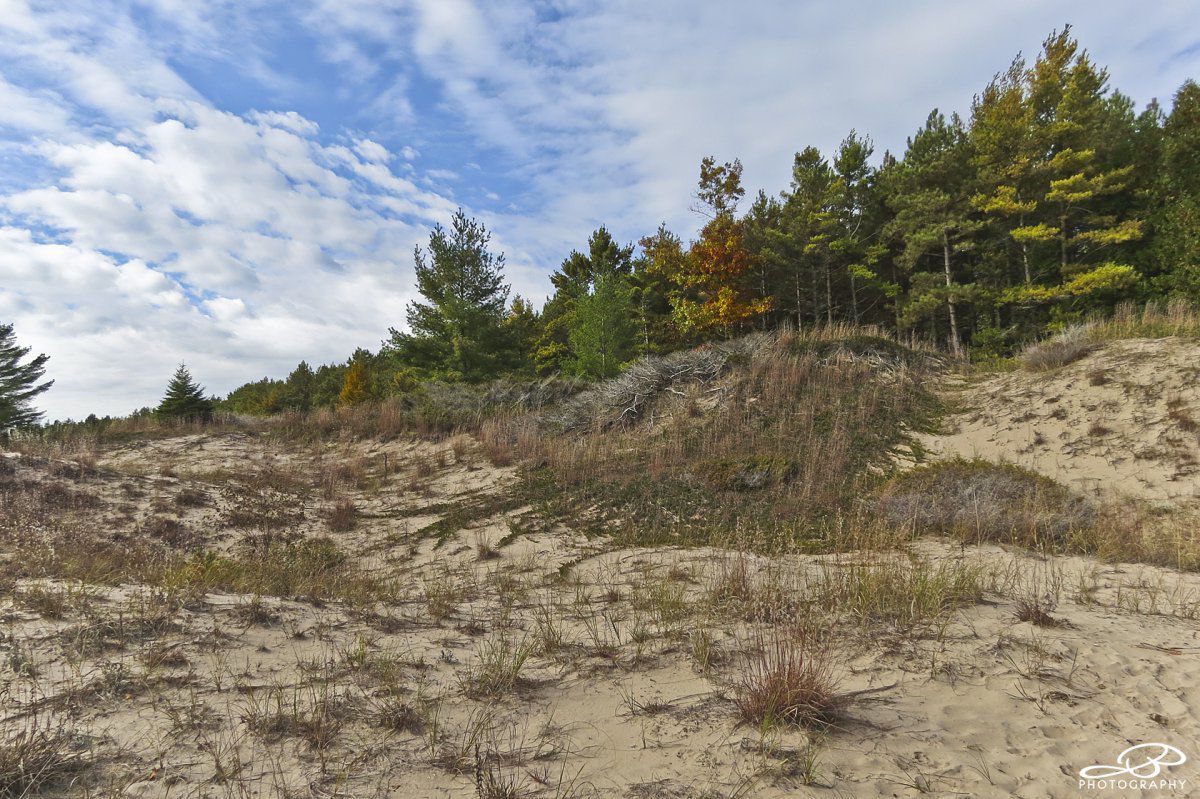 From there, I walked to the beach and headed north. 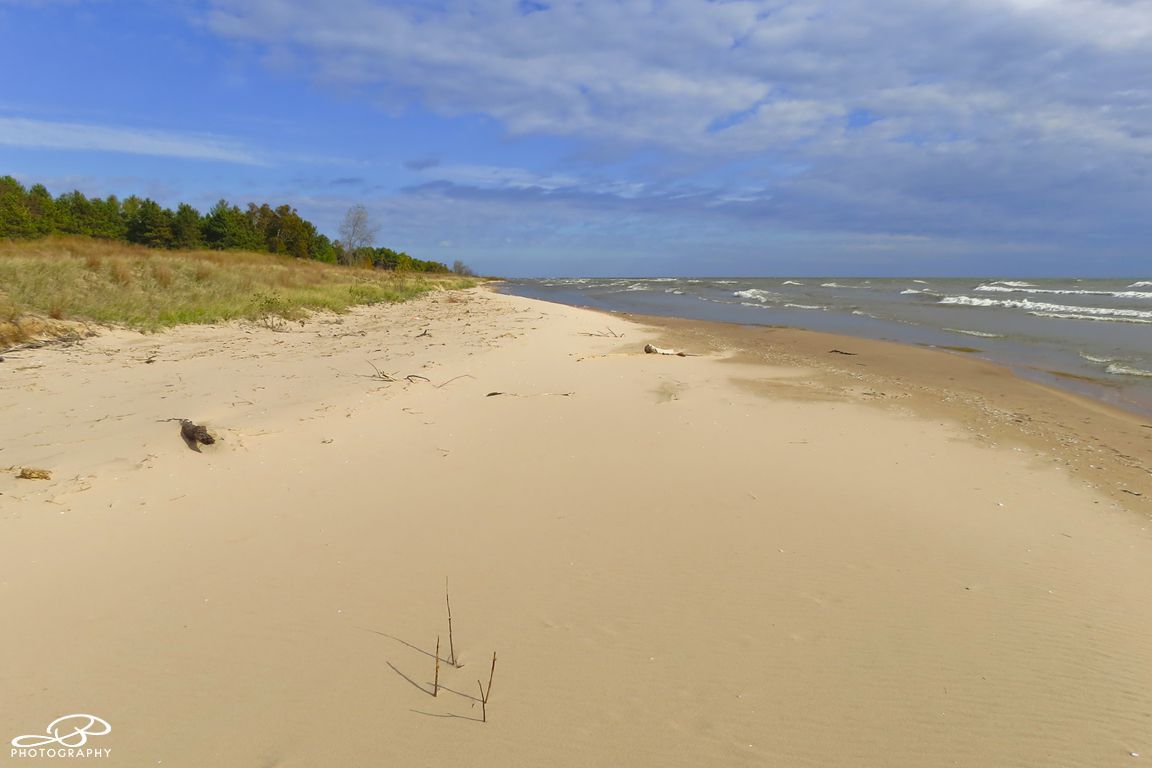 Eventually, I reached the creek, and it was as interest as I could've hoped. I have never seen a creek flow through a beach before. It was an amazing sight, especially with the pines across the way. I'm surprised the tourism department doesn't promote this area more, and I hope they never do. The beauty of this area is that there are no bridges, no signs, and no trail. Just true nature. 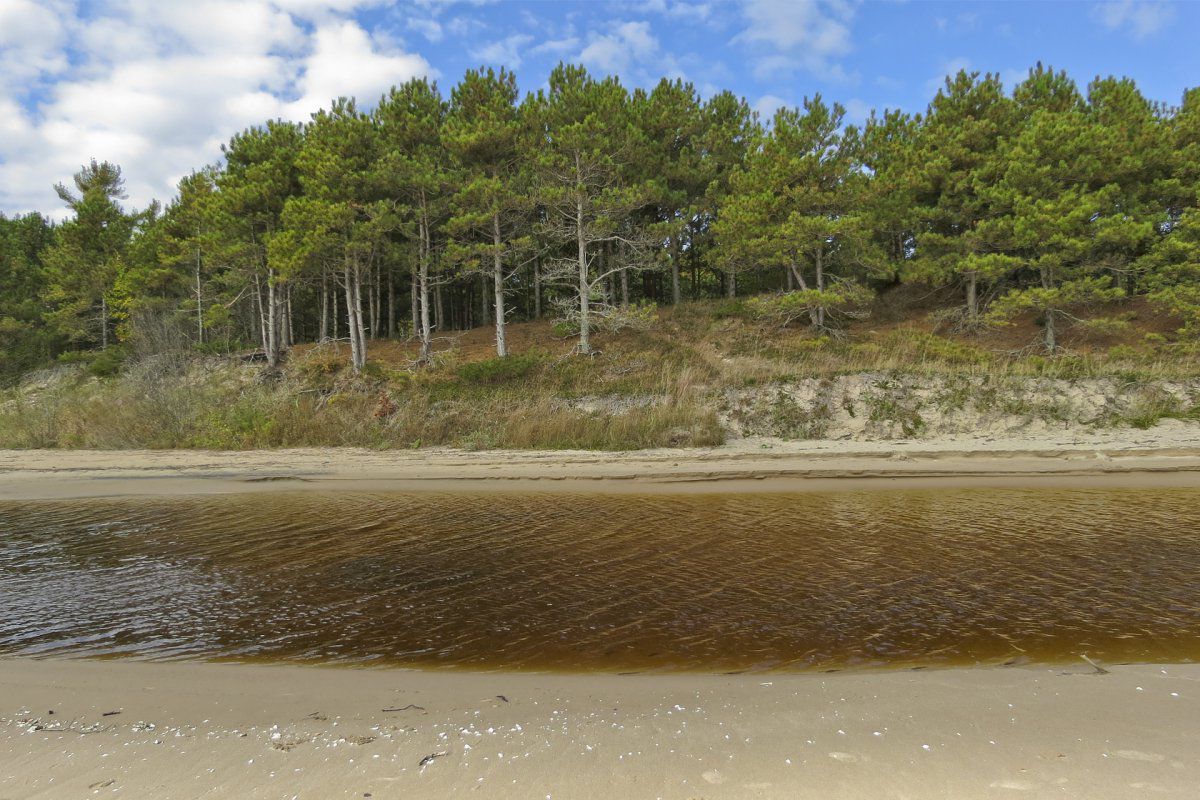 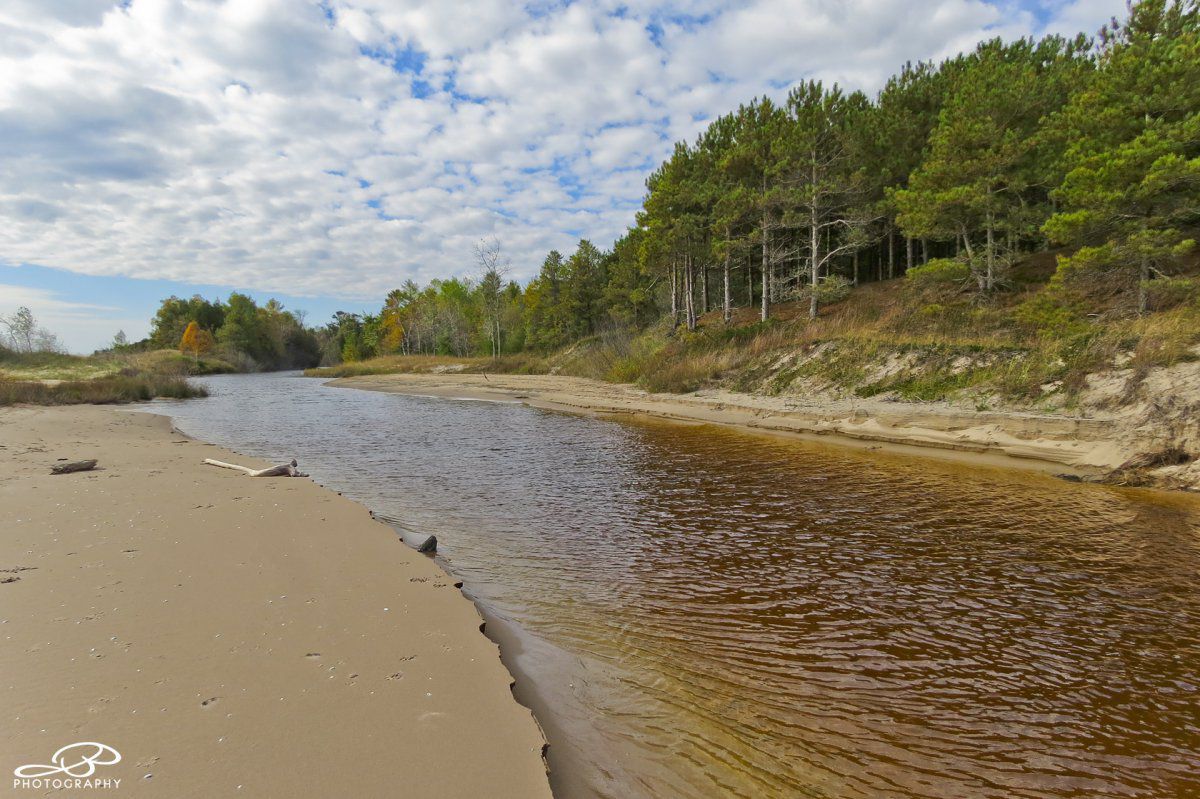 Here's some video from that hike.

Within the forest lies one of the tallest lighthouses in Wisconsin. Sources say it is either 111 feet tall or 113 feet tall. I spend a lot of time around it when I'm there. Photographing it at different angles and at different times of day. The immediate area surrounding it is Coast Guard land, so you can't go right up to it, but they allow you to get fairly close. 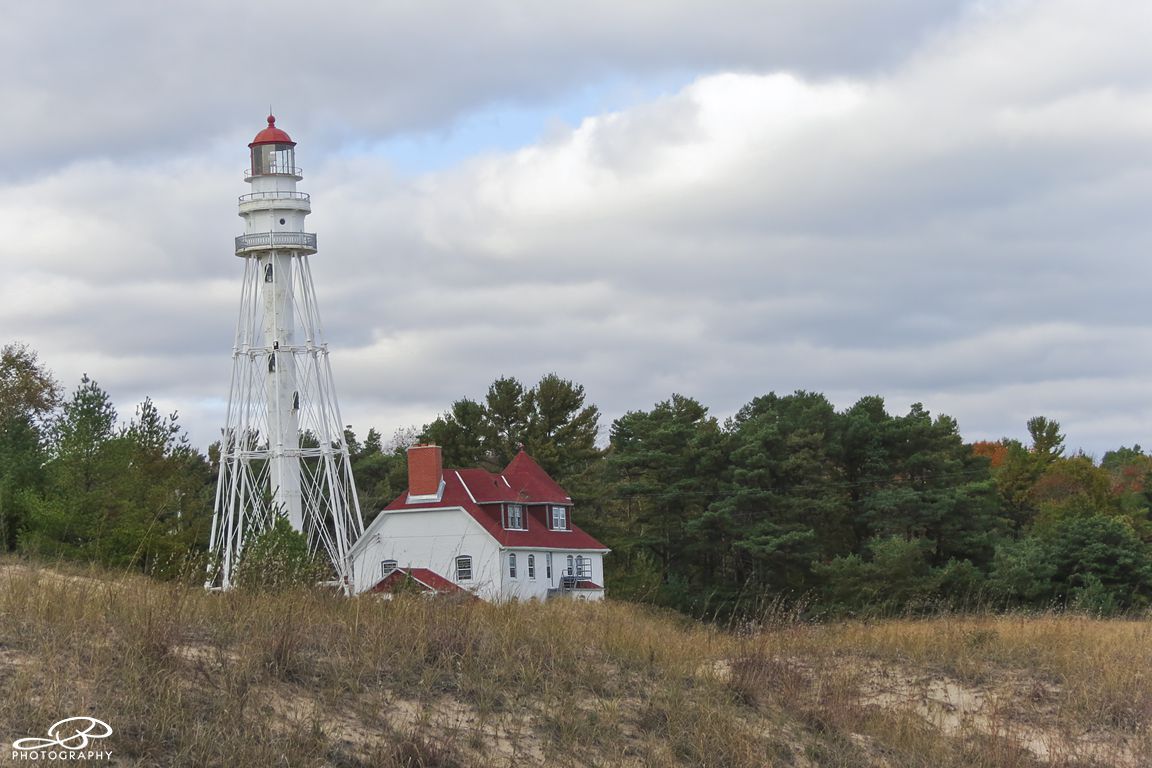 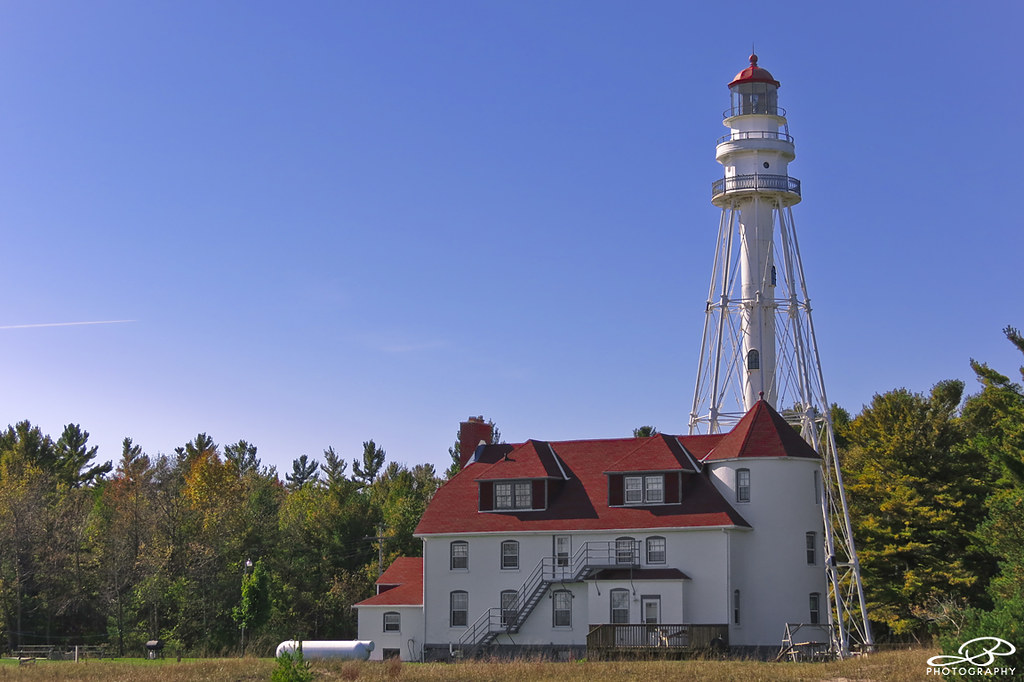 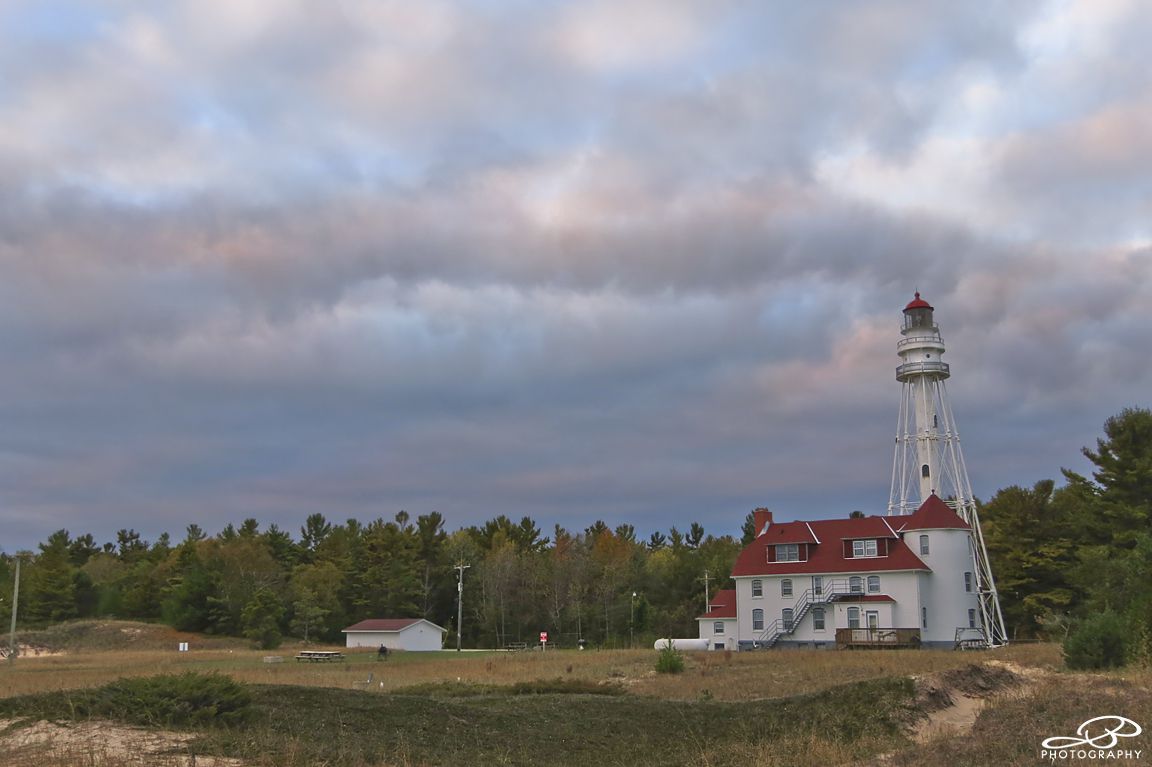 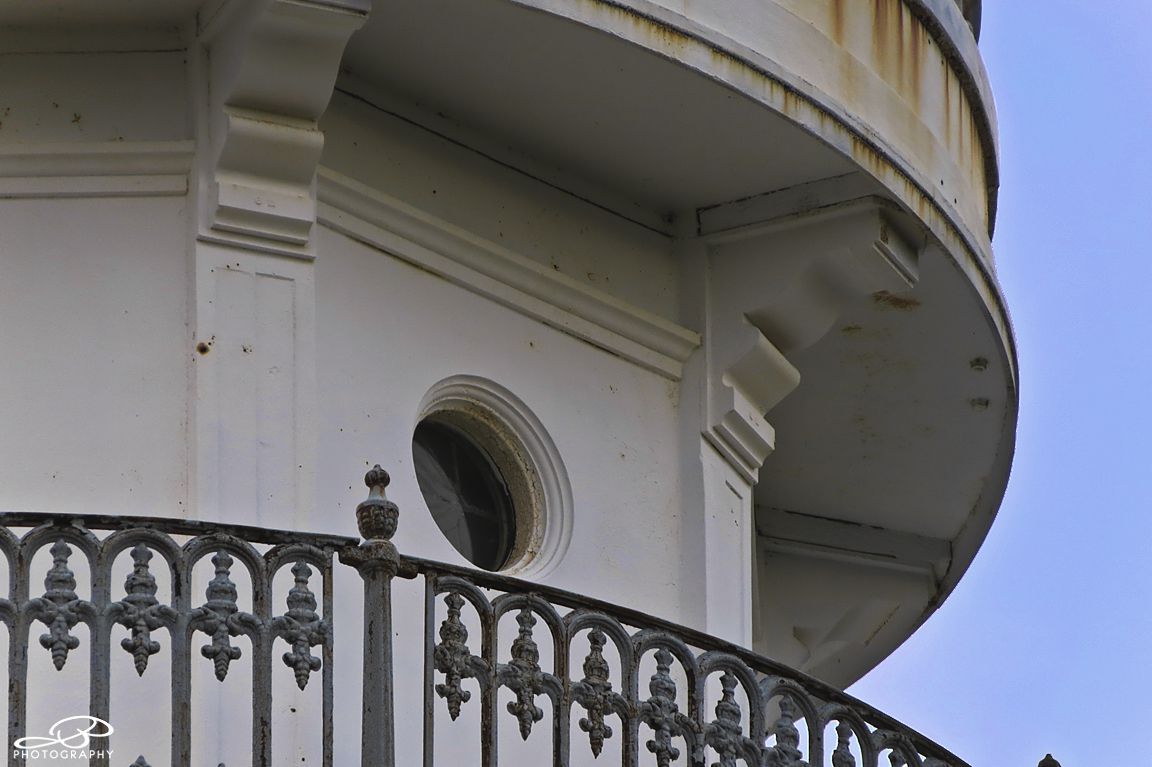 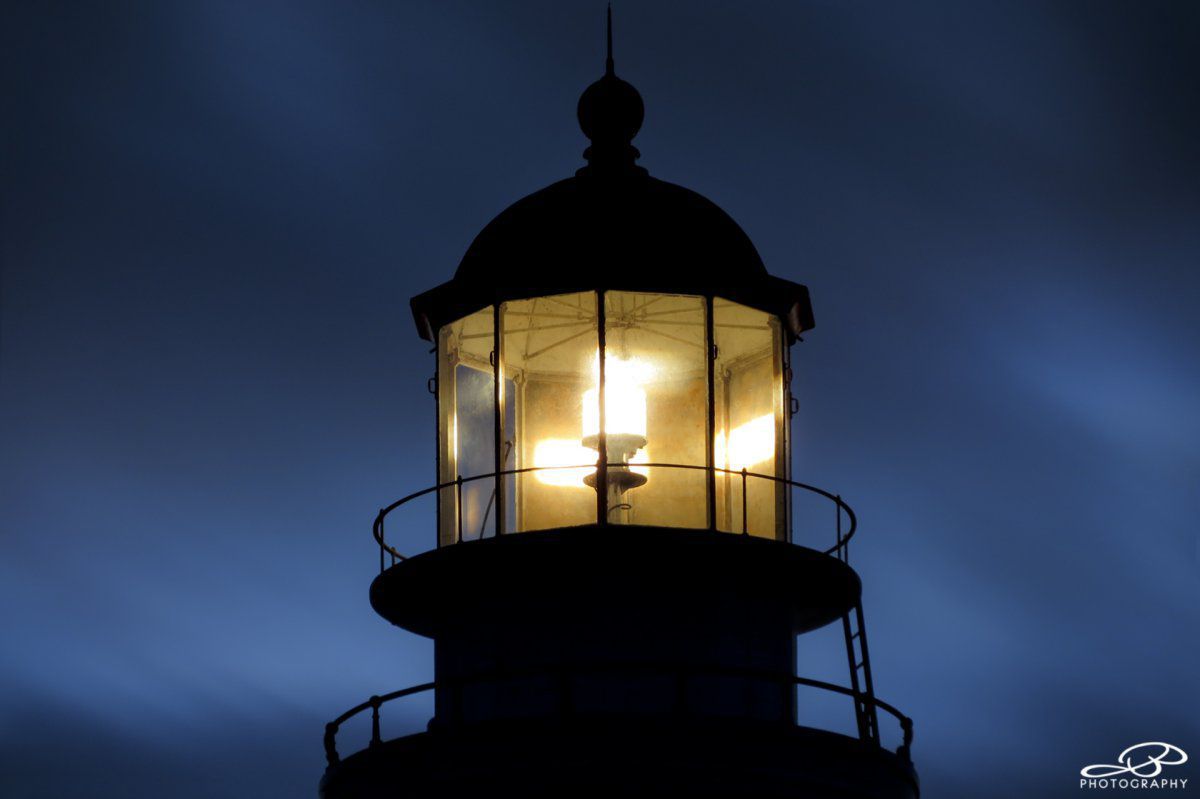 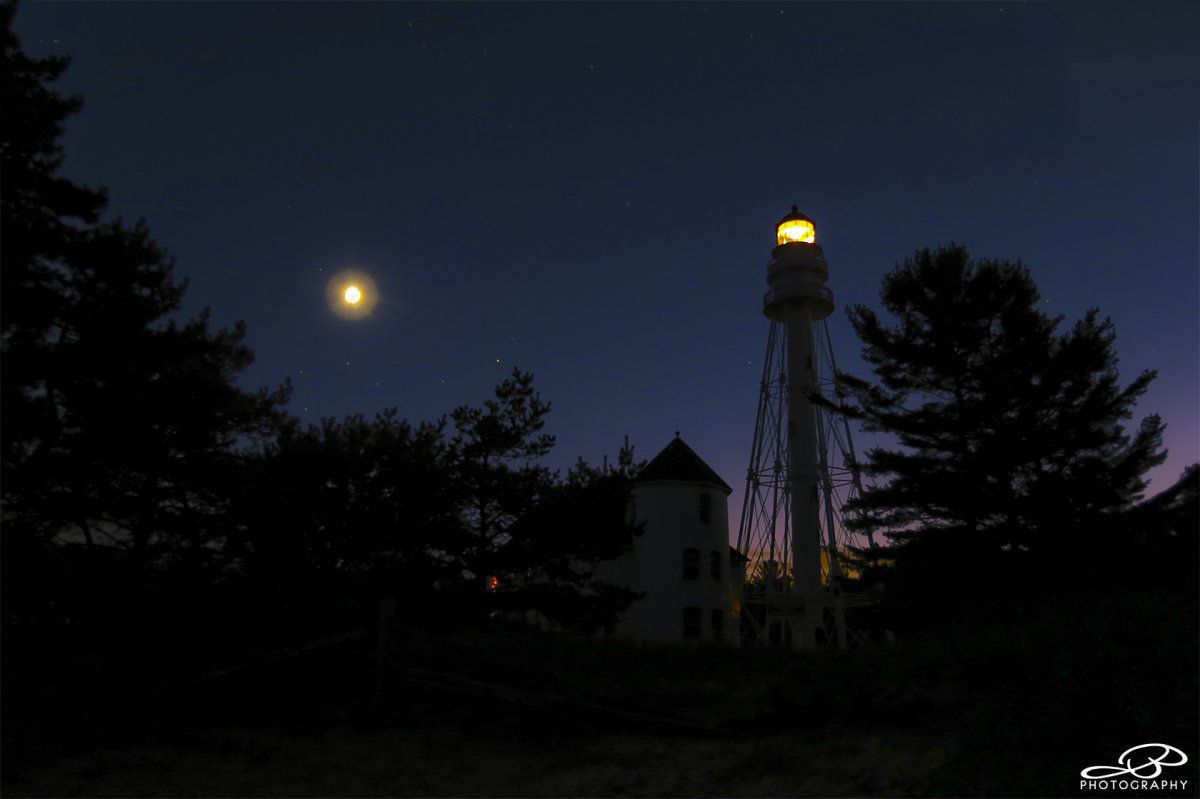 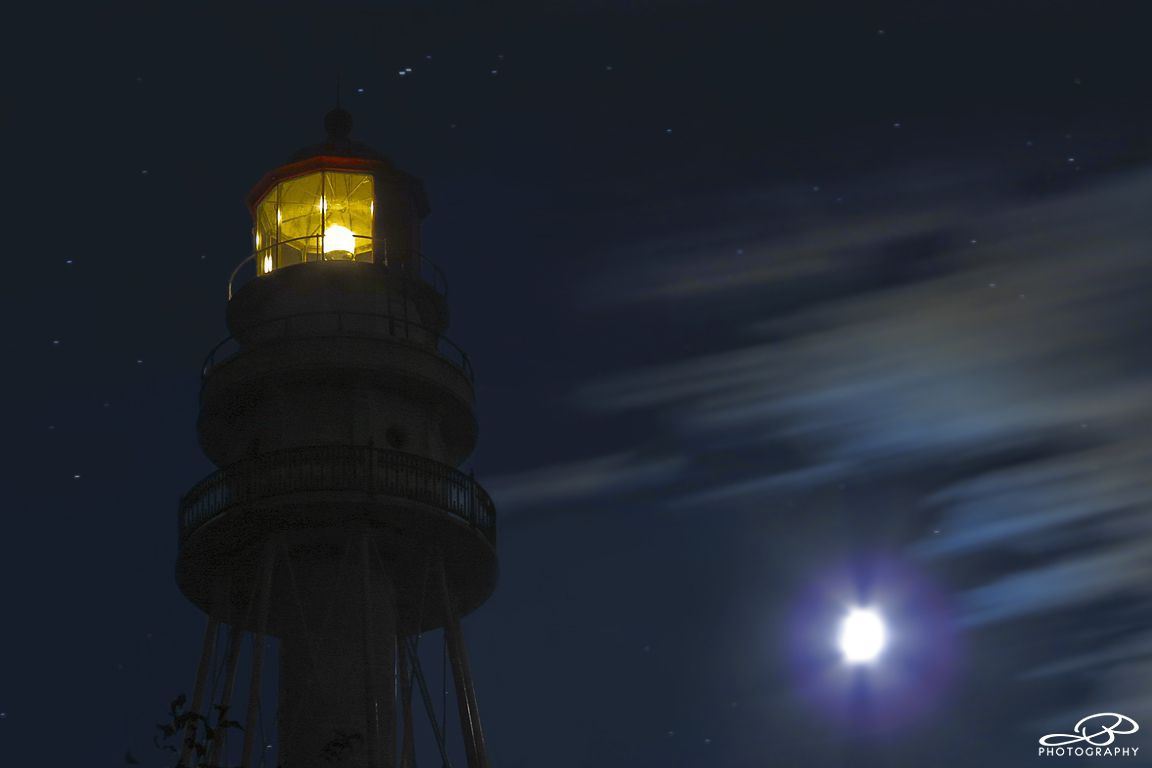 Just south of the forest, there are two other lighthouses. I had to photograph them while I was there. The closest is the Two Rivers lighthouse, which is just outside of the forest border. It is no longer in use and now sits along a river at a small museum. It's a cool little wooden lighthouse, just 36 feet tall. The wooden deck was not an original part of the lighthouse. 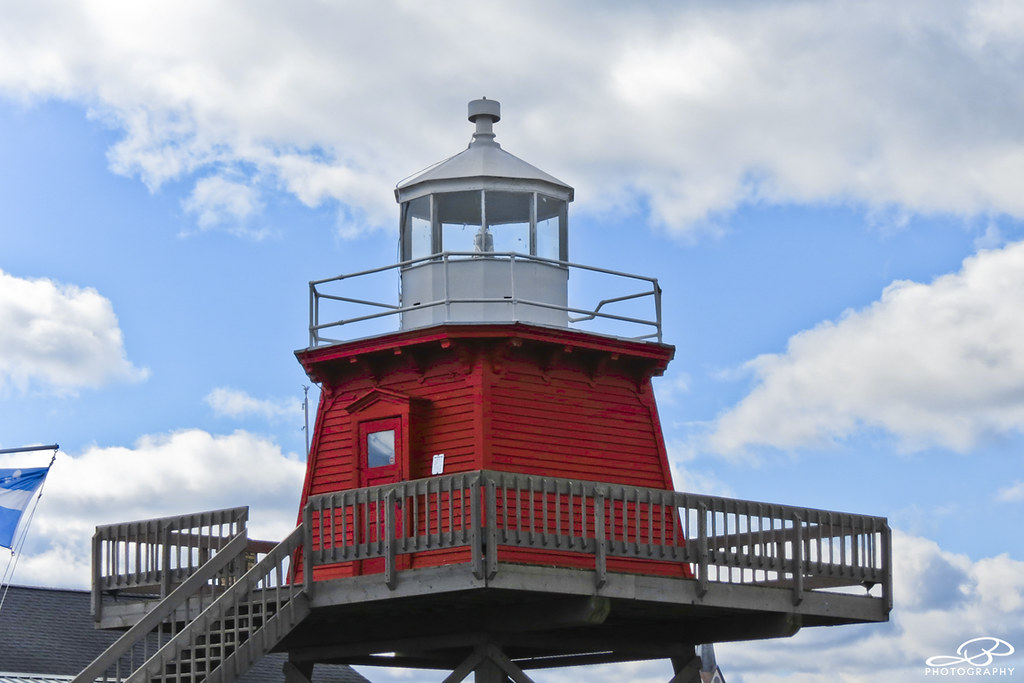 Not too much further south is the Manitowoc breakwater lighthouse. For comparison, this one is 46 feet tall. 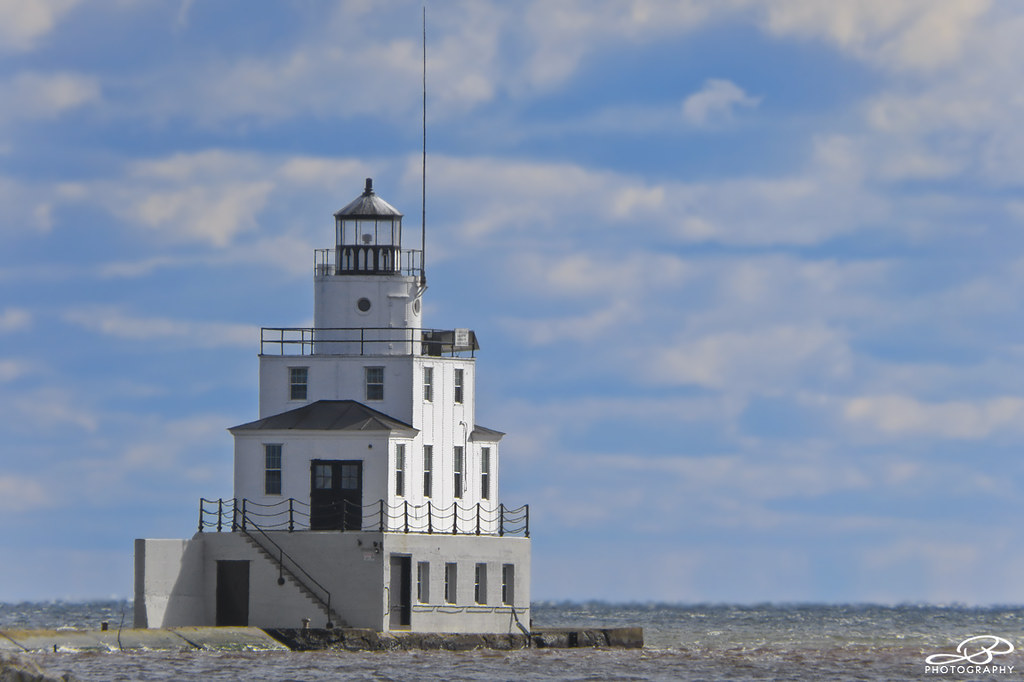 Keeping the theme going, when I got home from my trip, I decided to head over to the lighthouse near me, which I've seen many times, but I wanted to visit while my memories of the other lighthouses were still fresh. This lighthouse is another very tall lighthouse, at 108 feet. 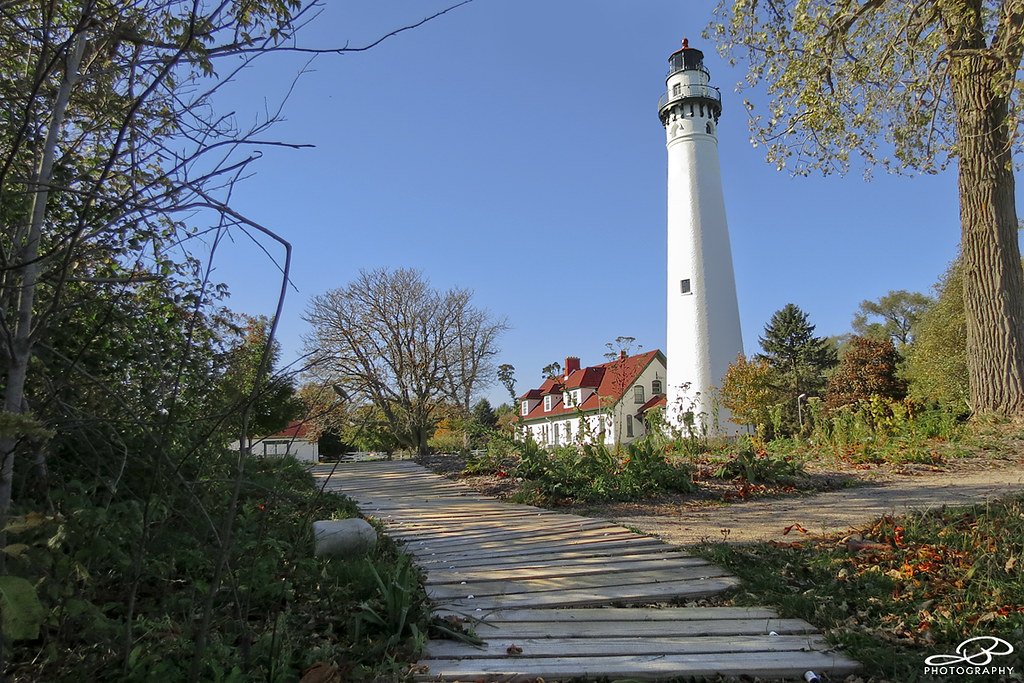 I hope to someday see all of the lighthouses on Lake Michigan in Wisconsin, at least in my part of the state. I've seen seven of the fifteen I hope to see, and if I complete that list, I'll someday have to head further north to see the other 20+ lighthouses.


Lastly, I thought I'd share this. Camping in state parks around Halloween usually means there will be decorations, but I've never seen anything like this before. Four or five campsites were fully decorated with lights. Everything was glowing. It was like walking through a Halloween village. I can't even imagine how much time it took for these campers to put this all up and take it all down. 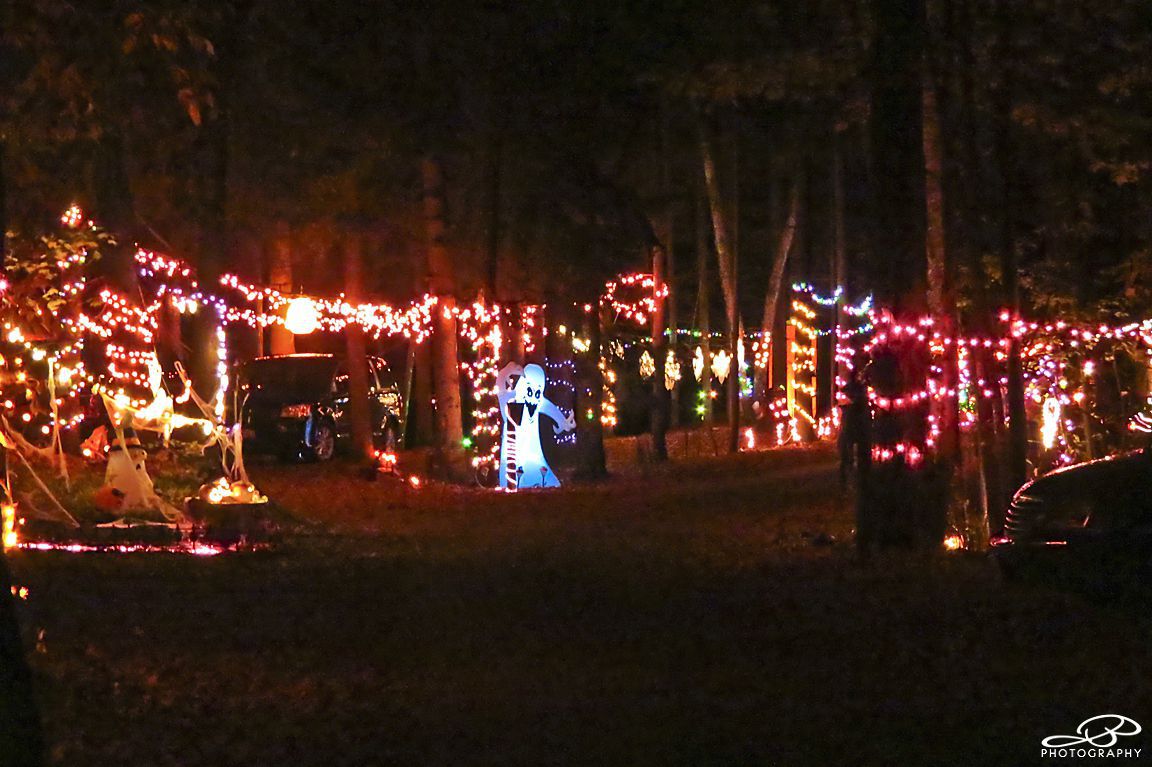 Wow, what stunning photos! Looks like a fantastic trip, thanks for sharing it with us

I agree with @Becky . Those are stunning proofs of just how lovely North America is!

Becky said:
Wow, what stunning photos! Looks like a fantastic trip, thanks for sharing it with us
Click to expand...

Thanks! It was a fun trip!
Ad

CanadianLori said:
I agree with @Becky . Those are stunning proofs of just how lovely North America is!
Click to expand...

I appreciate that. Showing the beauty of nature is why I love photography so much. I always hope that showing it off with help people to understand how important these places are and how important they are to protect and expand. In this case, I'm also glad I also got to show off some historic buildings as well.

For anyone interested, I just completed the full slideshow of my vacation:

You've captured some gorgeous moments there

Oh wow !!!!!! @JBtheExplorer Very, very interesting write up and pics and videos are absolutely fab. Particularly loved the scenery and colours of Molash Creek. Sunrise was stunning!!!
Thanks so much for sharing your camping experiences with us
Ad

Truly beautiful. Thank you much for a wonderful experience.
Ad