Gopher, vole, or what?

I have this pest in my Southern California lawn. Has made a series of small mounds (about 6" across). No trails. If I open a hole, he fills it again within hours. I've tried mole worm baits - until I got this video of him on a motion sensing camera! He's not a mole, but I'm unsure of exactly WHAT he is! Gopher? Vole? Squirrel? Demon?
I put a rat trap next to the hole with peanut butter and oats, but he just threw a bunch of dirt out of the hole (pile about 10" high) and covered the trap. I'm going to try to drop some pellet gopher bait down the hole today. Can anyone identify this guy? And advise on how best to be rid of him (for good)? 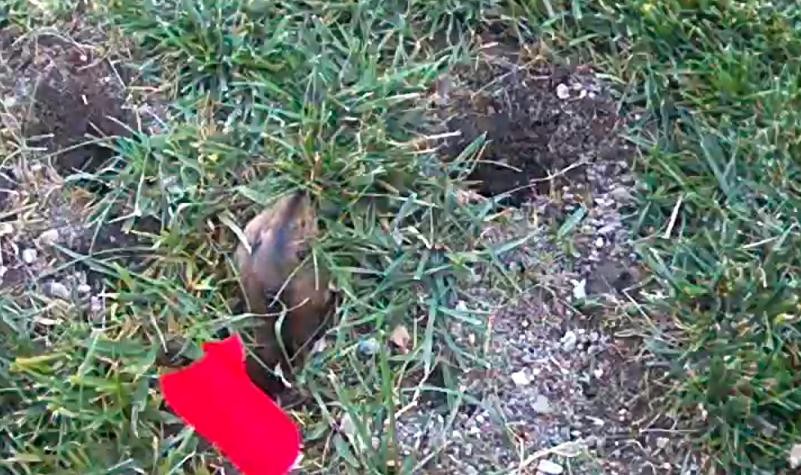 You probably have a gopher. Not only do they make dirt mounds, but they're herbivores and it looks like this guy is eating the grass. The internet says to humanely get rid of them, put a few drops of peppermint oil on cotton balls and place them in the tunnel openings. The smell of the peppermint will encourage the gophers to leave. However, it's hard to say how far they'll go and they may relocate elsewhere in your yard. I use a product called Repels All. It is designed to repel all kinds of wildlife. I bought it initially to discourage the animals from eating my plants. Then I had a raccoon who decided to use my flower bed as his toilet. After spraying the Repels All once or twice, he hasn't been back. The downside of this product is the smell, which is what keeps the wildlife away. But the smell isn't noticeable after a day or so - at least not to humans.

Gophers are easy to trap. They can easily detect a open hole and they close the hole to prevent snakes from entering. The soil they push ahead of them to close the hole is what this trap was designed for. I've trapped a few hundred in my life.
The hair trigger is man made by yours truly, seniorcitizen and I'll not be applying for a patent so feel free to do so.

Well, I THINK I've got the little booger now!!! I initially thought about repellents or catch and release but realized that my property is so big that he'd just find another location in my yard OR really raise havoc with my neighbors. But he's done so much damage in such a short time that I decided to play hardball. I tried a few of the bait-in-the-hole techniques with zero results other than I put a lot of money down that hole! So I decided SeniorCitizen may have the answer.

I'm not really as inventive or ambitious as SeniorCitizen (and I promise not to patent the idea) but I did notice that my local hardware store had some similar Victor Gopher traps at 2 for $10 so I picked them up. I noticed two new little mounds on my lawn so I dug them open and got to the tunnels. I attached strings to both traps, anchored them to a stake, and slid them in about a foot. I carefully covered the openings and went to get my wife to check it out. Fifteen minutes later when we returned, one of the trap strings was taut! I pulled lightly on the string and heard a noise coming from the hole - so I guess the critter is caught but still alive! So NOW what to do? What is his current life expectancy? I don't like having him suffer (although he may deserve some) but if I pull him out and he's alive, how do I finish him off?!?!
Ad

Being raised as a farm kid I usually have a cat around that tells me when a Gopher is in the trap so I usually do a little catch and release cat training, otherwise they get thumped on the back of the head with my heavy duty antique gardening trowel.