I've got that Wings "Band on the Run album," haven't played it in decades.

Watched this 2 hour concert on Sky Arts a couple of days ago.


She only sang three Fleetwood Mac songs towards the end of the concert, "Gold Dust Woman, Landslide and Rhiannon".

It's from early last year.
She had two attractive slim female backing singers with strong voices, one of whom has been singing with her since 1979, Sharon Celani. (I did my research).

Stevie's voice is still good, facially she looks little different from how I remember her in the seventies. But with all the "wafty" clothes she wears, with her huge increase in weight, when she did her "spins" which the audience loved, she reminded me of those "rotating flying chairs" rides you get at fairgrounds.
But it was an enjoyable concert.

Can't stop playing this one

Bet you can stop playing this one.

Jools has a penchant for wanting to duet with any attractive female artist on his show.

Due to their often polarised styles, they tend sometimes to meet in the middle with something under rehearsed that he can't play and they can't sing. Here's an example.

Coincidentally, someone sent me this yesterday. 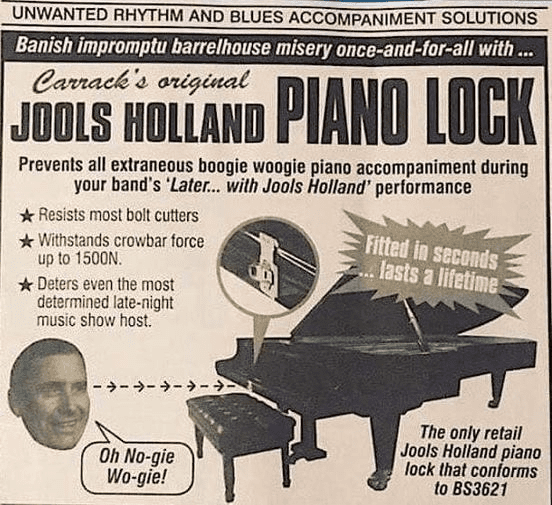 The songs by "The Cure" are pretty awesome! I mainly like the ones written in the late 70s to late 80s. My favorite band.

I felt my age last night, though I had to smile.
Someone on one of the audio boards to which I occasionally contribute, posted the sad news that Tommy Mara, the lead singer of the doo-wop group "The Crests," had just died at the age of 65. They linked a YouTube video of a compilation of their several hits. He did look pretty ancient as did a couple of the other singers.


Then I thought, "hang about" if he were a member of the original group, he'd have been about five when it was recorded.

As with many, this is just really a "tribute group" like so many others who make a living performing tunes loved by many. I thought they were quite good.
But all the original members that sang on the original recording are dead, bar one and he's long retired. I've only a rather scratchy copy of the recording, but it earns its place amongst my ten doo-wop 45s in one of my jukeboxes.

Here's a TV performance of the original members.

Anyone a fan of the late 80s and 90s "modern rock/alternative rock" like Depeche Mode, The Cure, Catherine Wheel, New Order, Morrissey, Siouxsie and the Banshees, etc.?

Tess said:
Anyone a fan of the late 80s and 90s "modern rock/alternative rock" like Depeche Mode, The Cure, Catherine Wheel, New Order, Morrissey, Siouxsie and the Banshees, etc.?
Click to expand...

I like some of Depeche mode and some of Morrissey but never bought any.

I thought he was old fashioned at the time, much like Frank Ifield.

But a lot of people will remember and like this.

I thought he was old fashioned at the time, much like Frank Ifield.

But a lot of people will remember and like this.

Can't watch this on here have to go to YouTube.