It can surprise you.


We bought this white wisteria on 15/04/2018. It wasn't cheap at £50. It wasn't showing any life, I took this photo on the day we bought it.
It was to replace the one that grew from the right-hand corner of this narrow bed, most of which had died apart from the branch that grows over the pergola on the back of the house.
The only thing going for it was that it would get the sun for most of the day. It was over a month before we saw just the slightest evidence, that it wasn't dead.

But it's been fed and well watered, responded to training and has repaid us. 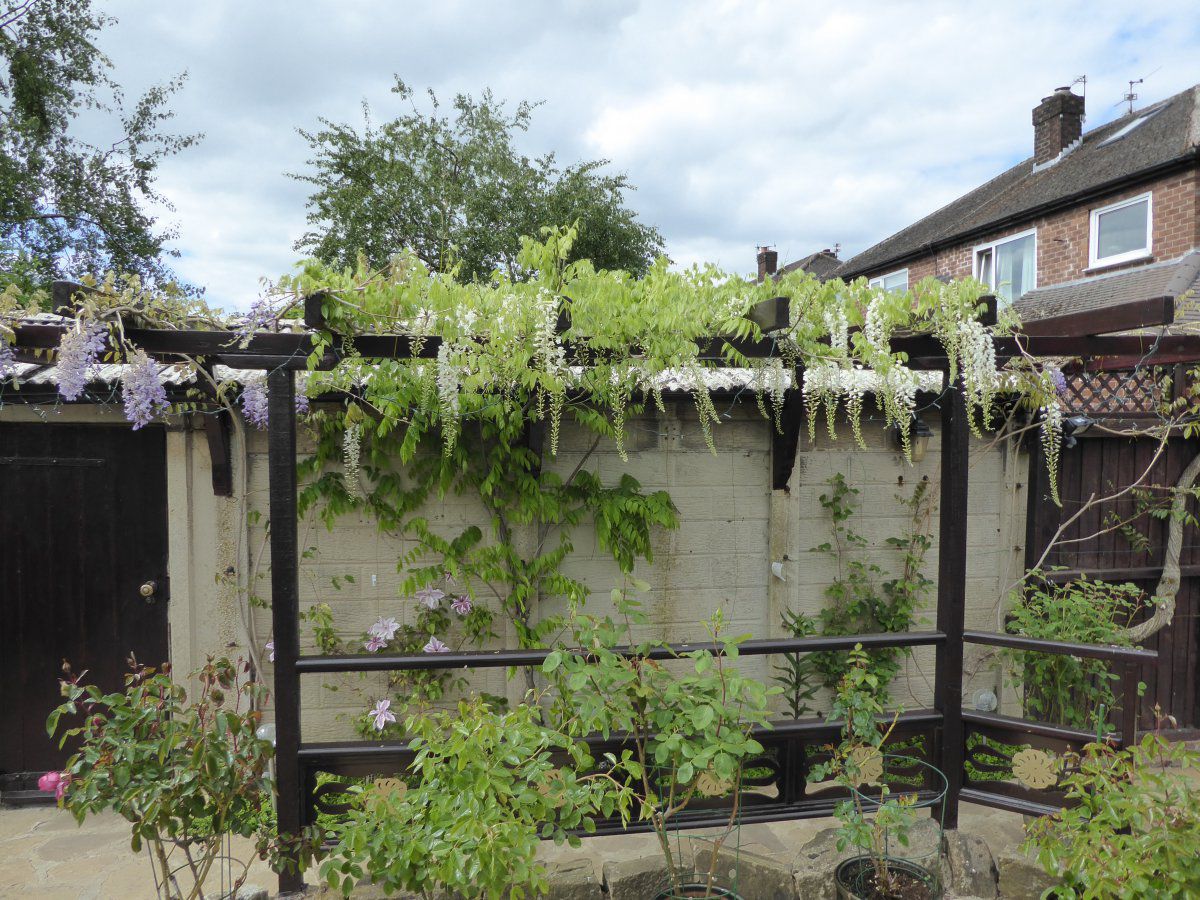 OH wow ,I haven't seen a white one before, she's beautiful! Does she grow like the blue one with a lot of vigor?

oneeye said:
OH wow ,I haven't seen a white one before, she's beautiful! Does she grow like the blue one with a lot of vigor?
Click to expand...

We did have this white one on the pergola on the back of the house for about ten years, but it sadly died around 2006. 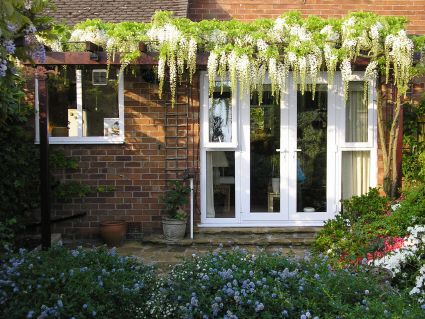 But we replaced it with a blue one (couldn't find another white one at the time) which grows from the same position at the right hand end of the pergola and the part of the blue one that didn't die in the end of the the narrow border beside the garage, crosses with it in the middle. You can see the branch passing over the door in the side fence. 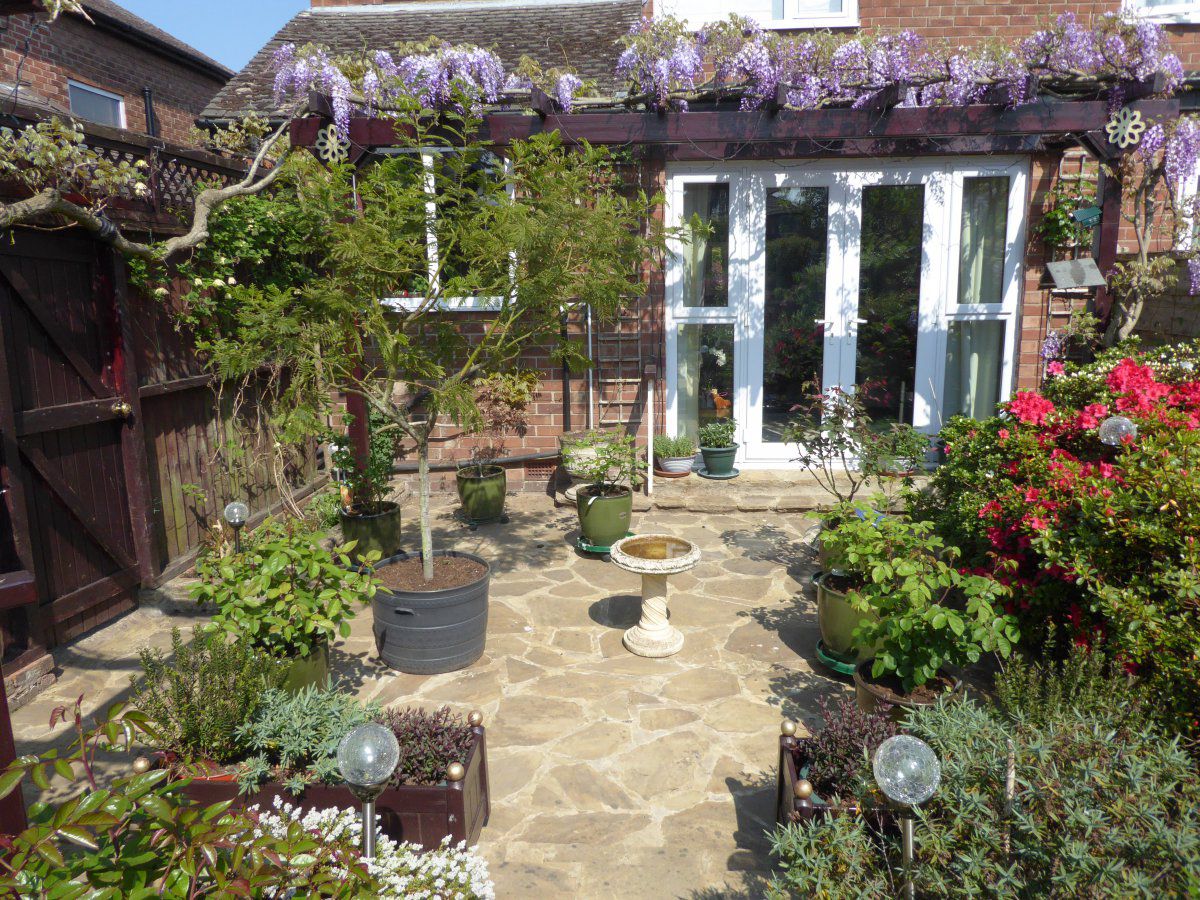 This is the one between the shed and the tea-house. 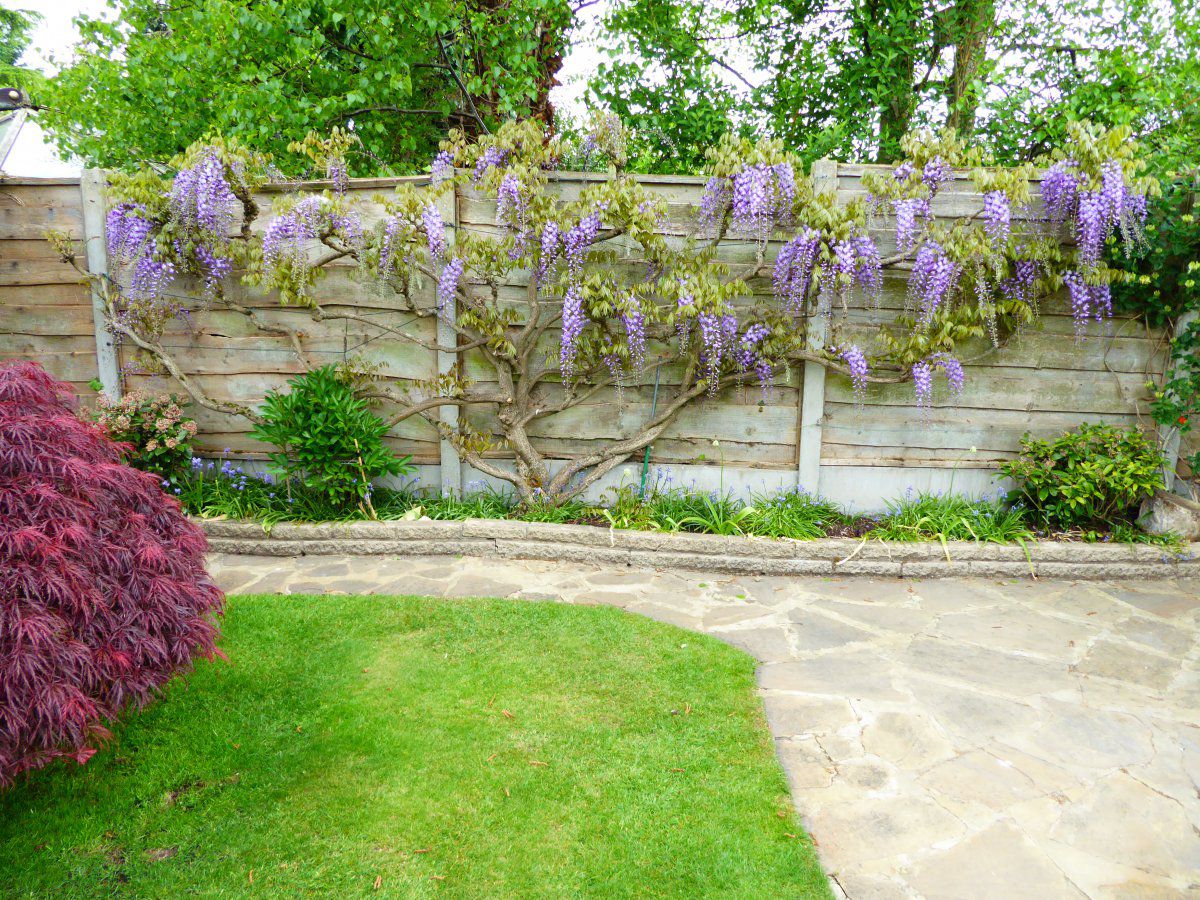 This one used to grow round an eight foot high stump of a tree that died. But the stump rotted and I pulled it out. It now grows up the redundant bird feeder, that I at one time used to support the red rose I mentioned elsewhere in the side border.

You can see our thick bamboo "forest" at the end of our garden. But it's only a foot deep as our back fence is behind it. 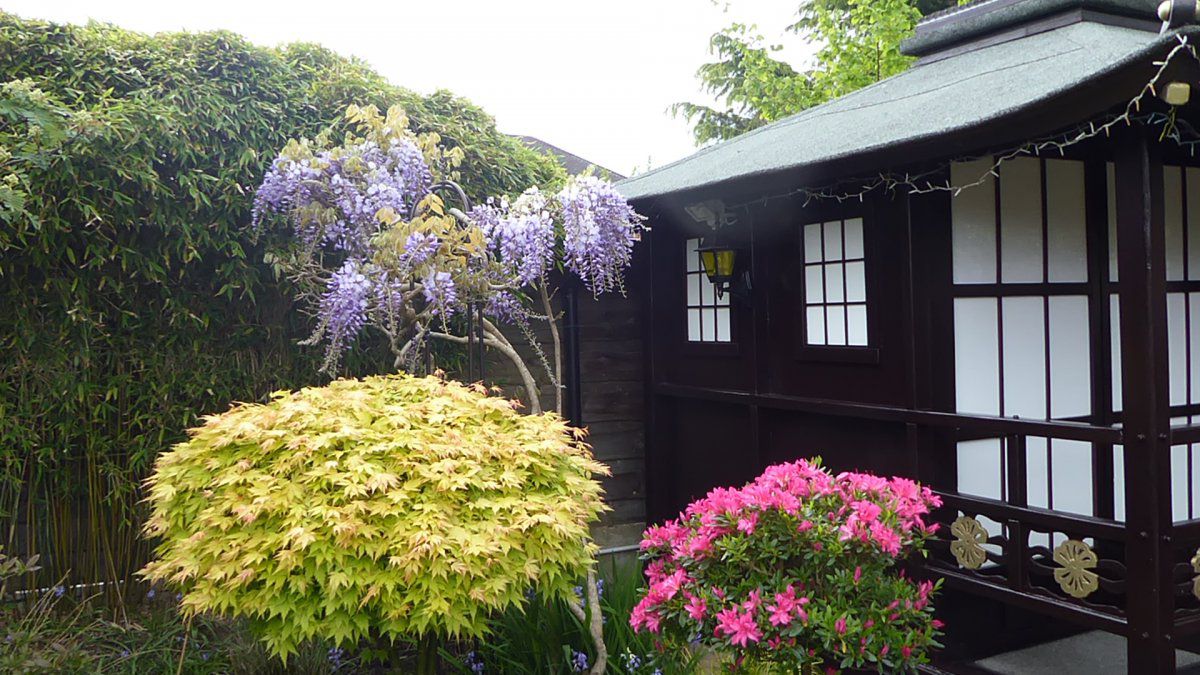 This is a pink one in the small bed to the left of the kitchen window, I grew to train over the fence and around the side wall of our house. 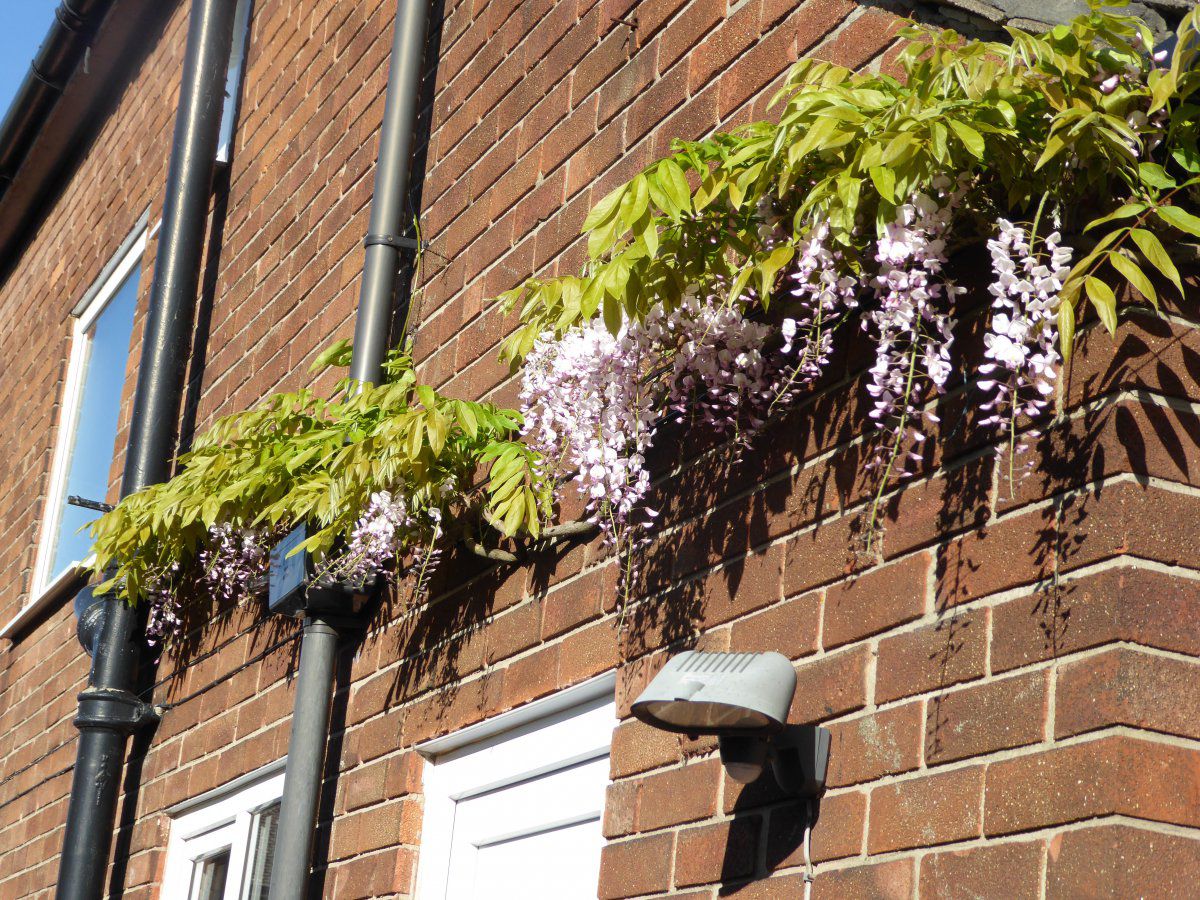 For anyone who is a bit apprehensive about pruning back wisterias to between two and four buds in January, which results in blooms and no leaves at first, like this. This is the same one on the side fence today, the blooms are fast disappearing and there's as many leaves as anyone could want. 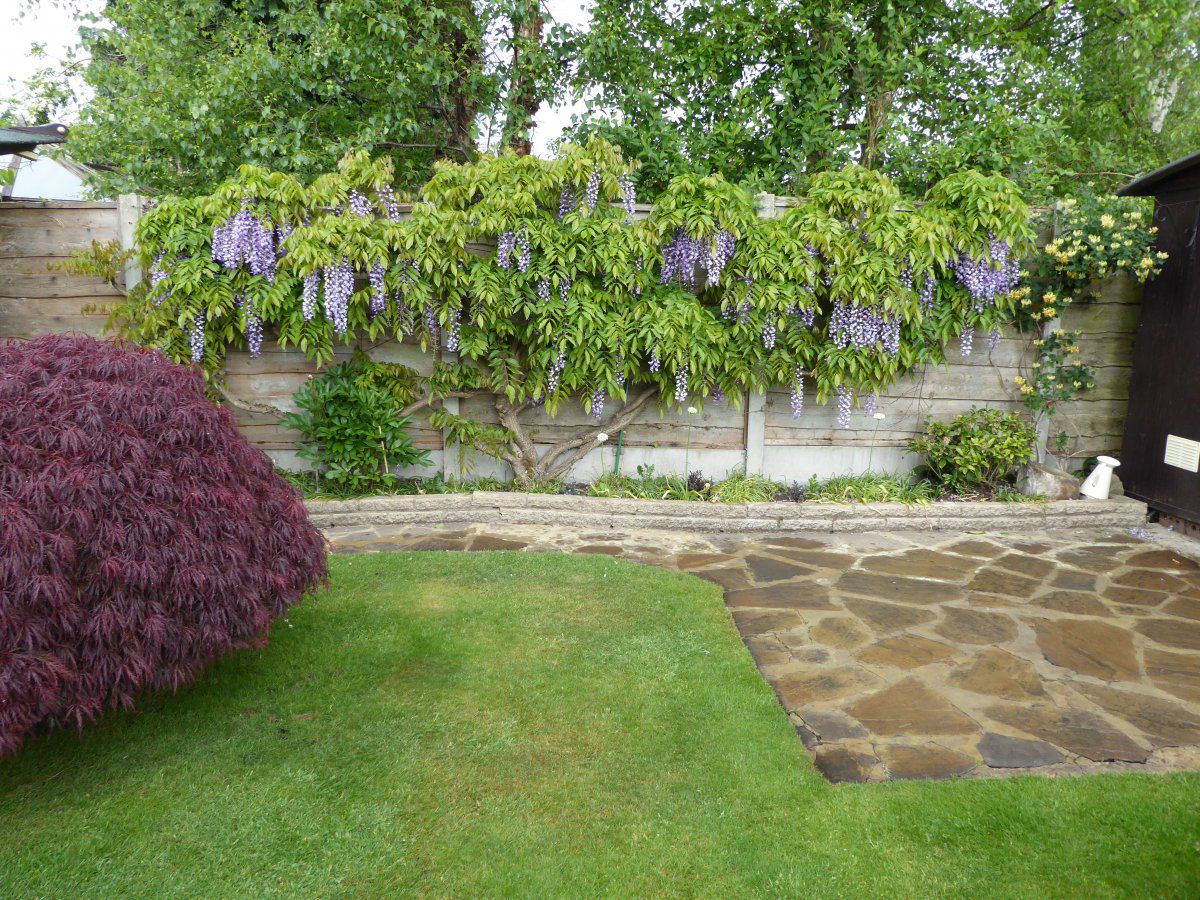 Beautiful, thank you for showing all 3 colors, because I've never seen a white or a pink one.