Should Leylandii cuttings be supported until they can support themselves?

Last year I bought a batch of rooted Leylandii cuttings to plant a fast growing hedge. After planting, I noticed that none of the cuttings were able to support their own length and so they were all bent over in one direction or another. I decided to support them by tying them to stakes/bamboo canes etc over the winter, last weekend I removed the stakes and most of them are still bent over.

This will be their first proper season of growth having (hopefully) rooted properly over the winter but I'm not sure whether they need to be staked upright again until they are able to hold themselves straight with no support.

My two conflicting thoughts on this are:

1) Yes, stake them until they stand upright on their own because if I don't perhaps they never will...
2) No, don't stake them because with artificial support, they will never grow strong enough to stand up on their own.

I would appreciate some pointers on this so that I can either reinstate the stakes or stop worrying about it before summer starts proper.

Thanks in advance,
Gc

P.S. Pictures below, these are the three I had left over which I just shoved in larger pots but are representative of the planted ones: 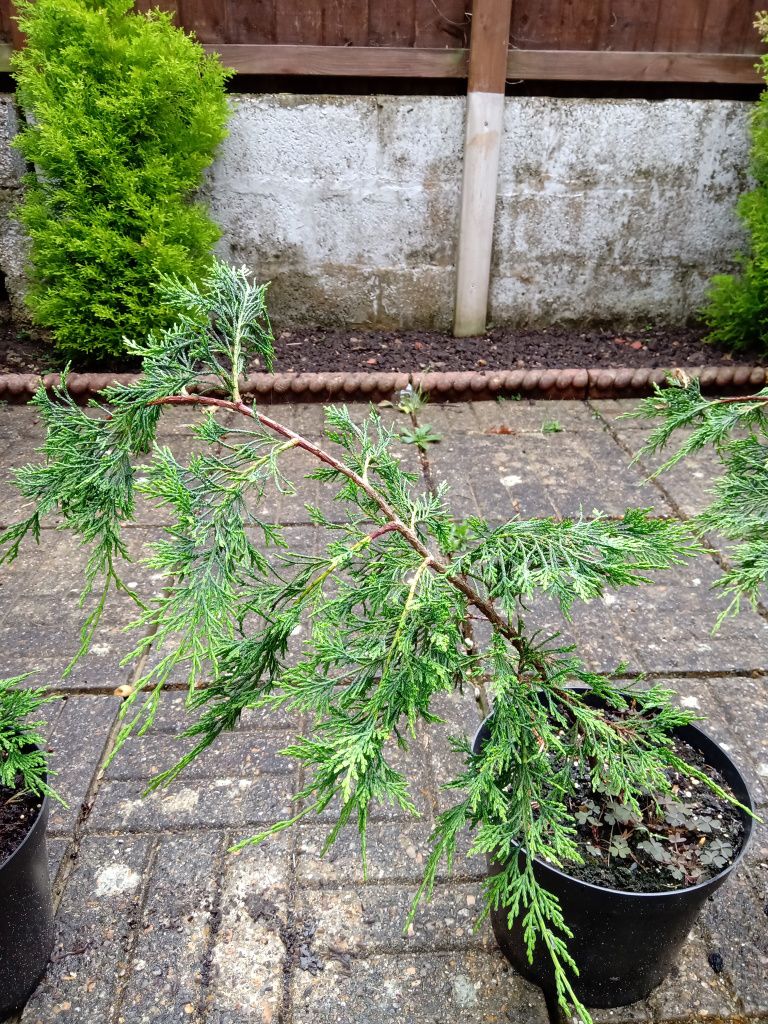 Those Leylandii cuttings look very good. I would use tomato cages to keep them upright long enough to strengthen the trunk. If you stake them with a stake the stems will stay too weak. Wind movement strengthens tree stems. You can remove the cages anytime, or check and see if they stay up in a month or two.

What I have done in situations like this is to use 3 stakes 120 degrees apart and loosely tied, just tight enough so that the plant can sway in the wind. As time passes keep loosening the twine. One stake will never work. I have not tried tomato cages.

Greenclaws said:
2) No, don't stake them because with artificial support, they will never grow strong enough to stand up on their own.
Click to expand...

You are well founded to want to avoid traditional stakes and right on target fearing they will never strengthen if staked.

The best thing I can think of would be the large, sturdy tomato cages as suggested by oneeye...not the cheap flimsy ones at the box stores but a sturdy one.
Ad

Thanks all very much for the advice. I don't have access to a garden centre at the moment so I'll see if I can cobble something suitable together out of canes and twine.