Set up of soaker hoses

I am using soaker hoses for the first time in my vegetable garden. From what I have read they are typically set up 12-18 inches apart. This is the spacing I have right now. The hoses are working great but are not saturating more than about 3 inches either side of a hose so I have some dry spots. I let the hoses run for about an hour and the soil is very well saturated in its local area but again a lot of dry spots. My soil is very light and airy and I am wondering if this adds to the problem of not spreading out very far and just going straight down. I guess the simple solution is to just move the hoses closer together but then I am kind of crowding my beds with hose. Any help with this would be greatly appreciated.
Ad

Soaker hoses should be run for hours, until all of the soil is completely saturated and then turned off for about a week or so. That is why they are called soaker hoses.

Probably a waste of time and effort.
T

Durgan said:
Probably a waste of time and effort.
Click to expand...

What do you mean by that? Soaker hoses in general or adding more hoses?

One hour is a very short time for soaker hoses. When I use them (usually to soak a bed that for some reason has gone very dry) I generally run them for eight to twelve hours.

We don't have those soaker hoses but I have an idea of what it's all about. What we do here is to dig a 4-inch hole between the plants. Right now we have those holes between cassava plants. That's where we pour the water lilke it is a small pond. When the weather is too dry, we pour water in those holes 3 times a day - morning, noon time, afternoon - otherwise the plants tend to go dry and wilt. It would be great if we can install drip irrigation but it would cost us.
Ad

Below defines what your suggesting, you have some type of fast draining soil. You can shift the location of your soaker hose(s) a bit... water move water if you don't want to add more hoses, increase the density of your soaker hose(s) i.e. add more, or start mulching and composting the soil to increase it's water retention capacity. I would also suggest that your probably losing nutrients faster than a moderate or slow draining soil too.

Greenhorn said:
Below defines what your suggesting, you have some type of fast draining soil. You can shift the location of your soaker hose(s) a bit... water move water if you don't want to add more hoses, increase the density of your soaker hose(s) i.e. add more, or start mulching and composting the soil to increase it's water retention capacity. I would also suggest that your probably losing nutrients faster than a moderate or slow draining soil too.

I would say I am definitely closer to the sandy drainage pattern than the loamy one. This was a soil mix that I bought for all my beds last year and I don't think there is any actual "dirt" in it. However I had one of the best gardens I have ever had last year so it is good stuff. The hoses are seeping out pretty evenly across their entire length but it is a pretty constant drip so I am wondering if the water is coming out too fast and would be better if it was a slower flow and maybe gave it a little more time to expand out. I have read that a pressure regulator is good to drop the pressure of house water pressure down when using soaker hoses so maybe I will try this. I know I will have to experiment a bit and I am grateful for the input and suggestions.
T

RamblingChicken said:
One hour is a very short time for soaker hoses. When I use them (usually to soak a bed that for some reason has gone very dry) I generally run them for eight to twelve hours.
Click to expand...

Is your water coming out a really slow seep? Mine is not spraying out or anything but it is a pretty consistent constant drip of individual water droplets along the entire length of the hose.

Trudge said:
Is your water coming out a really slow seep? Mine is not spraying out or anything but it is a pretty consistent constant drip of individual water droplets along the entire length of the hose.
Click to expand...

That is what you want
T

Chuck said:
That is what you want
Click to expand...

Great! At least the hose itself is working correctly.
Ad

Trudge said:
Is your water coming out a really slow seep? Mine is not spraying out or anything but it is a pretty consistent constant drip of individual water droplets along the entire length of the hose.
Click to expand...

It's very very slow, to the extent that if I turn it off and on I have to stare at a piece of hose for a few seconds to make sure that it's actually dripping. But I don't consider that a good thing; I think it's because I usually hook too much soaker hose length up to too much hose length.

heres the simplest soaker hose lay out....straight runs with dirt dikes<the dikes are for keeping the water in the general area and to keep the fertilizer from washing away,why feed the weeds>
will let the soakers run 20-30 mins every 2-3 days 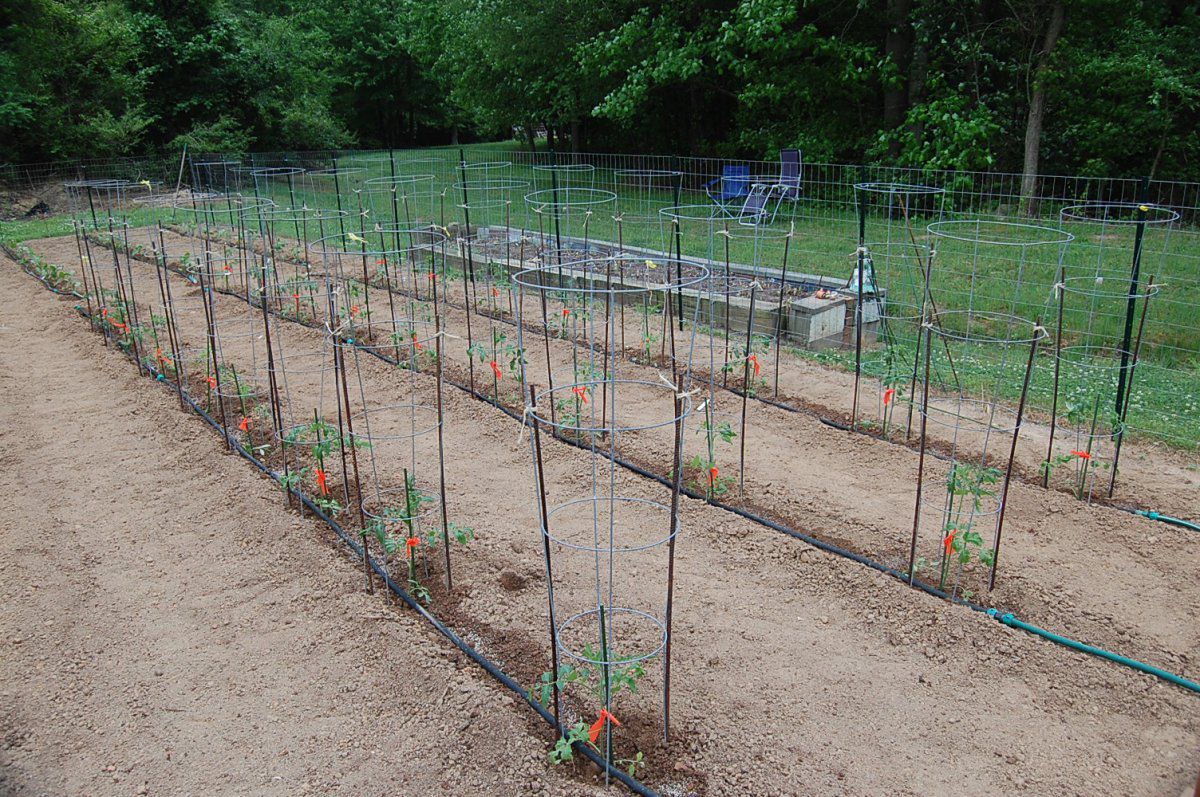 in the photo above you will notice that i made hose extensions this is for when the plants bush out,it makes it easier to hook up the garden hose to them..
with straight runs you only water what you need... minimal amount of pulling weeds though the season and maximizing your crop output. 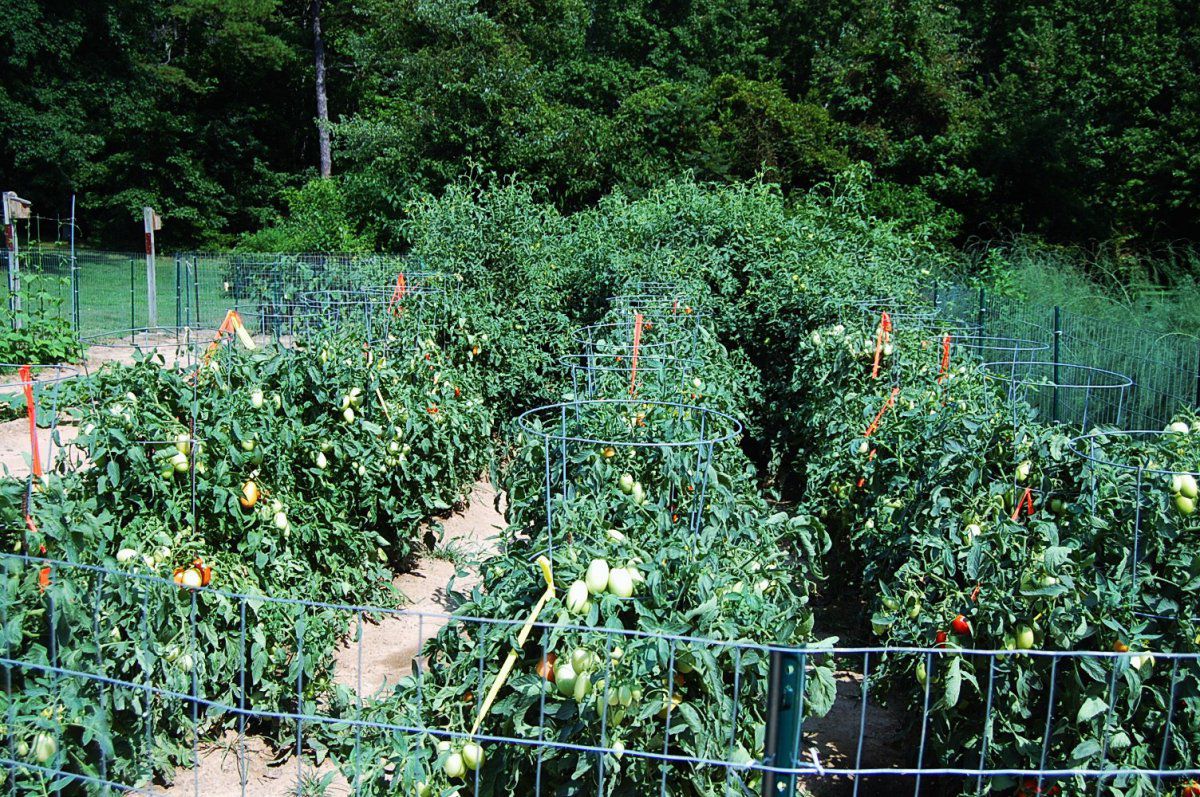 years past tried a couple different designs the hoop was nice ,but you also water everything in between 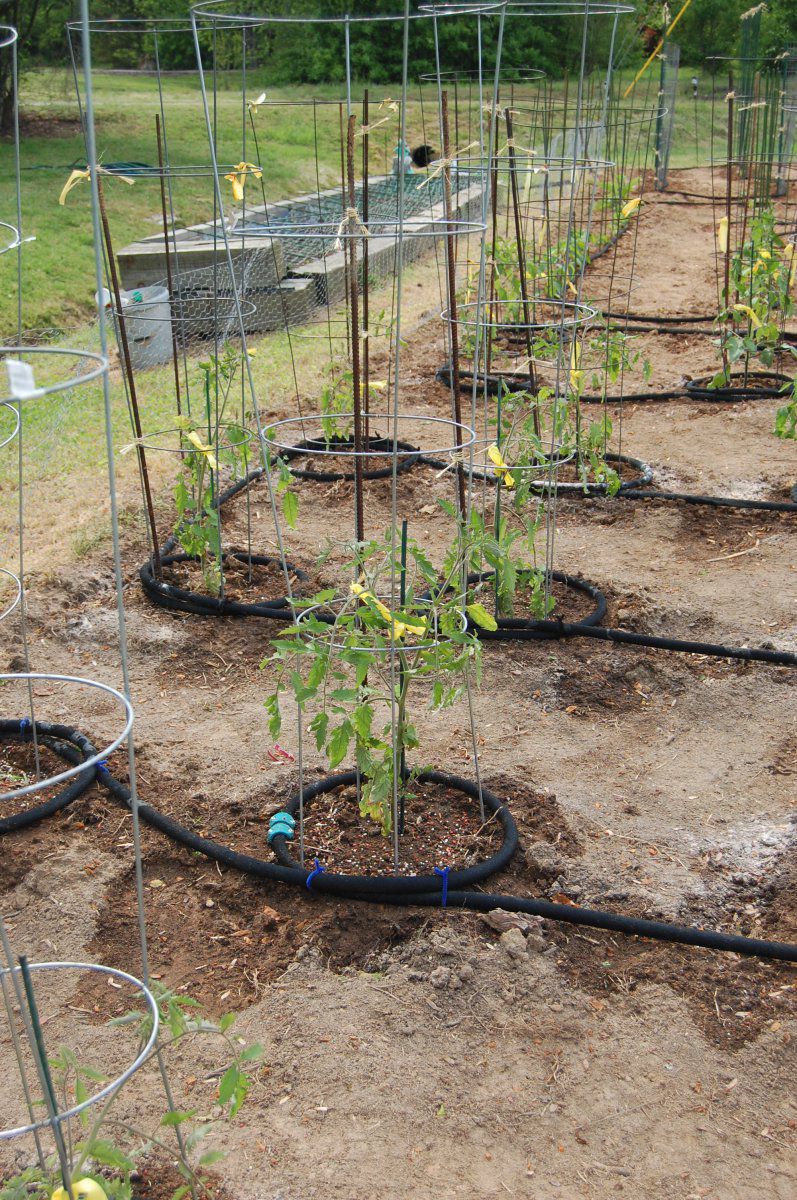 all the soaker i have are a true 5/8' id they can handle 60 psi, the soaker hoses you get from the box stores are 1/2' id they can not handle that pressure you need to get a pressure reducer 30 psi, otherwise they will burst. my advice is to buy true 5/8" in bulk and make your own once you know your garden needs. yes you spend a few extra dollars but your going to be much happier in the long run......

soaker hose maintenance..
any soaker hose will have a burst so have a couple hose splice repairs kits on hand.
and pressure wash them before putting away for the season.

the good thing about soaker hoses is that you are watering the root system compared to overhead watering which will lead to foliage diseases ...

http://www.durgan.org/URL/?DDBQE 8 July 2012 Effective Watering.
Get the moisture to the roots of the plants! Not by guesswork, but by utilizing an effective delivery system. The watering magic wand and a bit of effort delivers the water where it can be utilized by the plant roots. The soil is hard packed clay between all the plants, yet the plants are thriving. The plant root growing area might be compared to a large pot.The pot being the hard packed clay outside the root growing area. All my plants are watered when large enough using the WATER MAGIC WAND.When the plants are small a watering can is used or a pail.Why would any thinking person water the ground between the plants where it does no earthy good? Even some of he large trees get water, since during this dry spell some are shedding leaves, a sure sign of they need water. Drip,soaker hose, and aerial spraying are almost insane as far as being effective for the plants.Plants so not need continuous watering, they like a deluge then a rest period.

Observation made to support my position.As a young man serving in Egypt (Gaza)it was observed how the local landowner watered his field of tomatoes. Remember this area is almost like a desert.Labour was cheap.The two or three acre field was dammed around the circumference, about two feet high. Then the field was flooded about six inches deep. A marvellous crop ensued.

Another, once visiting a botanical garden in Cincinnati USA, it was observed that they were growing plants certainly not native to the area. The area was heavily mulched.Upon investigation it was ascertained that the non climate plants were grown in large pots and watered as necessary.This system of growing is analogous to my present yard, the hard packed clay soil around the growing plants being the pots.Nobody in their right mind would water pots.

Mulch helps retain moisture for loner periods, but it alone is not adequate if there is insufficient rainfall.The watering times are staggered,hence the effort is not onerous. The results are spectacular with little wastage of water. I tried to get a debate on this subject some time past, but the response was the normal, dull non-reflective response from some people with me to’s so gave up.

Your Granddaddy did a better job watering his plants with a stone boat and a team of horses and a couple of 45 gallon drums, than most of your present methods. He sure didn’t blanket water, you can be sure.How much water is determined by experience. You don’t need a meter, your plants will inform you and usually quickly. Quod Erat Demonstrandum. Pictures substantiate my method.

http://www.durgan.org/URL/?XRXAU 21 June 2012 Watering Methods.
I seldom water except for very young plants, and extreme dry conditions. I don’t have a sprinkler on the property, and consider them inefficient and not very effective, except for watering grass. I never water grass. To inhibit moisture loss from hot Sun evaporation all areas of the garden are mulched with wood chips.

Usually I utilize my four barrels of rain water. The wheelbarrow is used to transport the rainwater to the garden area, utilizing a milk cartoon carrier(or egg carton carrier)as a baffle to prevent spillage due to wave action when moving the wheelbarrow.

In extreme dry conditions it is necessary to use tap water.The tap water is delivered to the plant root system using a water wand cut off and pushed into the requires area. I call it the Magic Water Wand. In the main garden it is quick to walk along a row and push the wand into the ground every few feet and get the water to roots, where it is required.The foliage is not wetted, and there is little wastage of water.

people like you @Durgan are the reason people post a question and then leave......how forums you have been kicked out of now?

your canning methods has always been questionable, guess we should call you mr e.coli

how "many" forums you have been kicked out of now?...

and heres another reason why i am leaving you can not edit your post after x amount of time......

over the years, we have tried them. its just such a headache, laying them out. and then the line from the house. and then when you want to mow the grass you have to undo etc. The thing is it has to be on all the time, and if you have a well, and a pump, the thing is going all the time, that is electric usage and wear on the pump. Where a good rotating sprinkler for couple hours is just as good. Watering after the sun goes down ensure the best hydration.
You must log in or register to reply here.