Composting IN my containers?

Weird question. Can I make my compost in my plants container? I can add some food scraps and brown materials to the surface of the pot. I have a lot of worms in my containers which will help me out a lot with this project. What do you say?
Ad

You could but it would take the organic material a really really long time to break down and actually enrich the soil, I think. That's why a compost pile or container is supposed to be at least 3' square; to allow it to heat up and "cook", turning into the crumbly black stuff.

That said, no harm in it and over time it would be a benefit. I suppose the worms would help too. (You have earthworms in your plant containers? I have lots of containers, and lots of worms, but never see earthworms in the containers, just in the ground.)

No, but yes. No, it won't really be "compost" in the true sense; as Beth_B said, there's a cooking process. Compost cooks at 140-150° F., which would be too hot for the plant roots. But, yes, you can get worm castings, which is also called "vermicompost," so I guess the answer is, um... sort of...

The first year we moved into this house, I finally had room to garden. After the expense of shovels and rakes and planters, and various other things, I said to heck with it, I'm going cheap on the potting soil. The bigger planters, I filled the bottoms of them with chunks of dirt and grass ripped out from where I was putting the garden. I stuffed in handfuls of grass clippings. The planters I had sitting on the ground got filled with worms!!

I assume they crawled in through the drainage holes, going after the decomposing vegetation in the pots.

If you already have worms in the containers, you might as well feed them for the castings they'll provide. My advice is to run the food scraps through a blender (or at least some kind of chopper or processor,) before you put them in the container. You don't want it too watery, (don't drown the worms or your plants,) but you need some water to get them moving in the blender. You'll want it like a paste, try for the consistency of baby food - worms' mouths are very small, after all. Also, worms don't have stomachs, they have gizzards, like birds, so you'll need to provide them with some grit to keep things moving along. Crushed up eggshells or coffee grounds would work.

I don't think you'd need to have brown material, since it's not actually compost. A lot of people that have worm bins put a layer of damp newspaper over the bin, so dampened shredded newspaper (or coffee filters) over the top of the container would probably help. It'd keep in moisture, and provide more darkness for the worms to stay active, anyway. And help keep out any flies. And help keep in any smell.

Thank you both. I really appreciate your input. I will compost in a separate bucket as its more efficient. I do have a question. The worms in my container don't look like earthworms. I found an image of exactly what they look like.

I also have this type:

Are they good, bad, or useless?

I think that will work since there are earthworms which are the main agents of composting. I would suggest that you put some soil for the base like 2 inches of good soil before placing the earthworms. As you throw the biodegradables like vegetable trimmings and fruit peel, cover the bin with a page of wet newspaper. Yeah, just a page that later one would naturally mix with the compost. So in the life of that compost bin, you can have so many newspapers like one for each day that add biodegradables.

If that is what they are, they're better than earthworms. 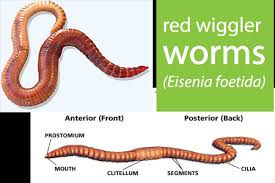 Some aerate the soil more, some eat more (or faster) than others. Some survive at different temperatures. But when you get right down to it - crap is crap.
Ad

Its possible but its fraught with risks. One, the temperature of the compost can be deleterious to plant roots as well as the worms which can become denatured in the process. There is also the possibility of the additional layers of compost compacting the soil. Unless you periodically remove the plant from the compost can, this is not recommendable.