Over the last few weeks I have build a new hog panel in frame fence around my yard. The panels are 8 gauge galvanized steel framed with 2x4 and stand about 33 inches tall.

I have a total of 104 running feet I'd like to cover. This leaves about 1/3 uncovered.

Now I am looking for vine suggestions to cover this fence. Some ideas I have

Centennial hops - I have a free local source of these vines, and occasionally home brew.
Hardy Kiwi - I really like this idea but the availability looks poor this year.
Wisteria - don't hate me, leguminous nitrogen fixing leaf mulch source.
Table grapes - a bit hesitant as grapes are toxic to dogs

Anyone have real world experience with hardy kiwi? Do they really taste like the fuzzy tropical ones we buy in the store?

This year I will have some butternut squash planted on it to cover.
Ad

I'm a sucker for grapes, I planted three vines to line the fence near my driveway this year, but I didn't know they were toxic to dogs. I don't have dogs yet, but eventually will, so that's good to know. Wisteria looks really cool but you do have to be careful to stick to native kinds for the environments sake, and I personally prefer things that produce something. I'd say go with what you'll use the most, or just do a variety of all them.

I don't eat kiwi but I was interested in those hardy varieties I've seen in the store, they might be fun to grow. There are quite a few videos on YouTube of people growing them and they seem to work well on a perimeter and the consensus is that they taste just like a regular kiwi, perhaps a little sweeter.

I have an awesome honeysuckle vine, can handle zone 5, would do well on a fence and make hummers happy in the summer.

Have a honeysuckle that blooms through the summer. Hummingbird magnet for sure. Neighbor has the hardy kiwi. Vines are massive and I have not seen an abundance of fruit. You do need a male and female plant but have been unimpressed. If you like grapes I’d say grow them. I’ve never had a problem with dogs eating grapes. Why would they eat something that makes them sick? My dogs are in love with peas, and any cole crops however, and one picks the blueberries. yeash 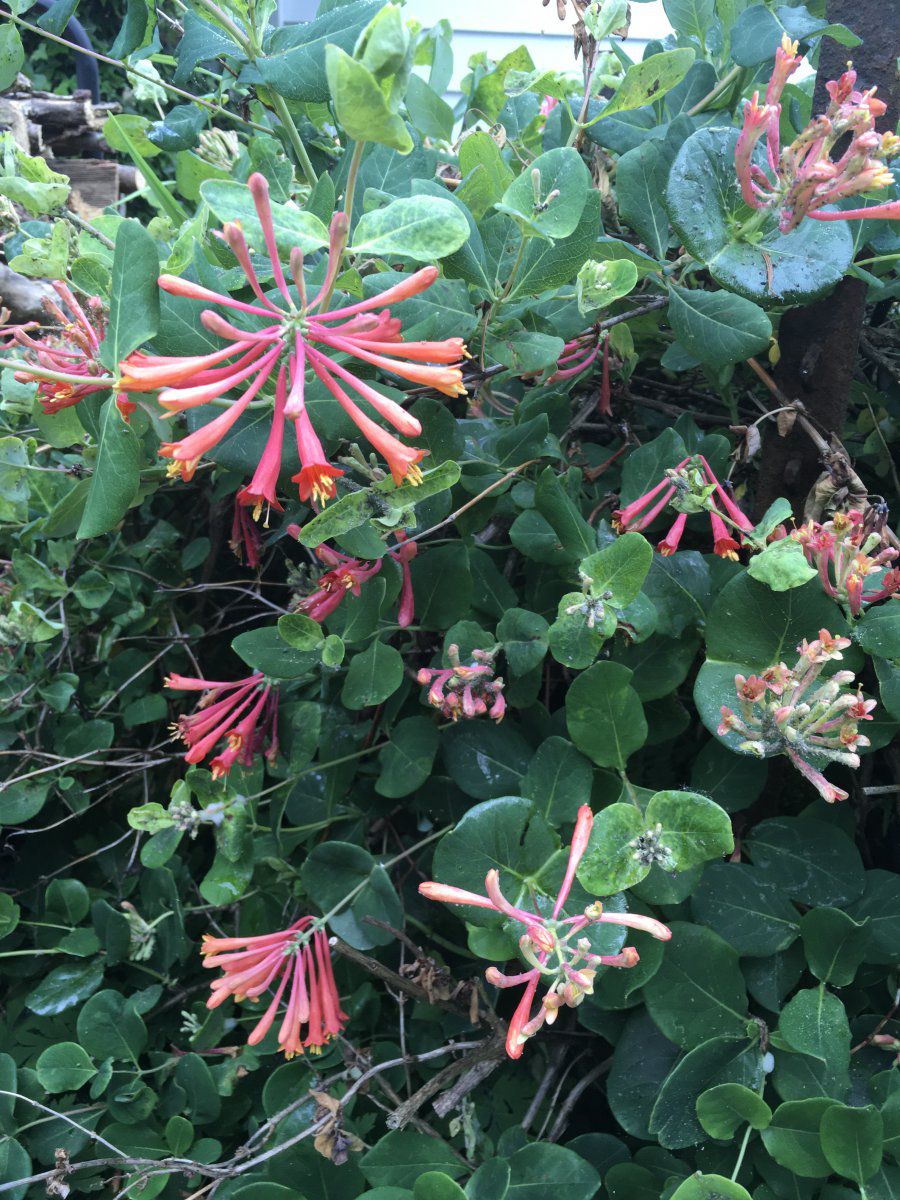 Jewell said:
Have a honeysuckle that blooms through the summer. Hummingbird magnet for sure. Neighbor has the hardy kiwi. Vines are massive and I have not seen an abundance of fruit. You do need a male and female plant but have been unimpressed. If you like grapes I’d say grow them. I’ve never had a problem with dogs eating grapes. Why would they eat something that makes them sick? My dogs are in love with peas, and any cole crops however, and one picks the blueberries. yeashView attachment 80987
Click to expand...

Yes, that is the one I have on my deck railing. seems to bloom, 3 to 4 times from Spring to Fall.

Here is mine as of yesterday. I pruned a lot out of it last fall, because we needed to paint the railing, I wrapped the thick vines in sheeting, took out lots of limbs, used a climbing thing to lift it off the railing about 3 inches to paint under it. Really, though in my heart I was going to hurt it. Never pruned so much out of it before. I usually only give it a small shaping pruning. But, it seems it liked it. Its gang busters this year. And yes the hummers love it. No smell, but the hummers are there. And that is my deck. 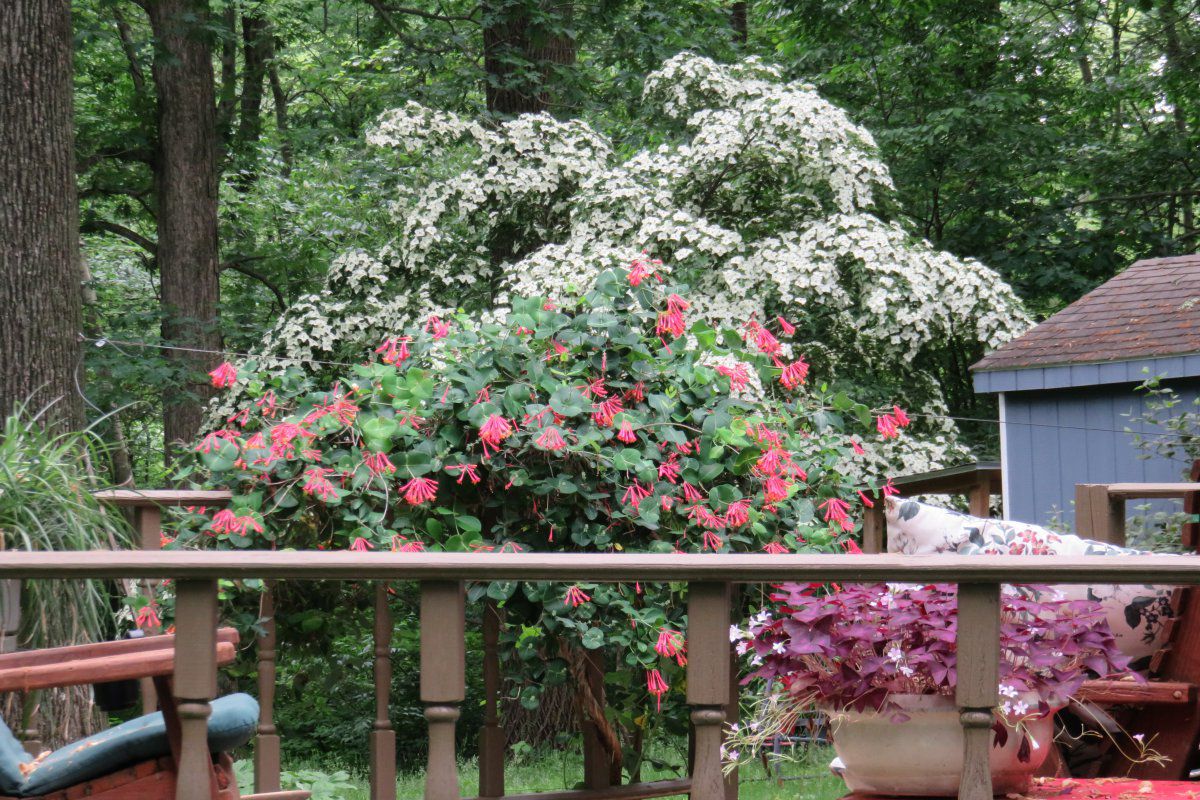 As a thought, if I had a fence, of 104 feet, I would have a few types of vines, make it look interesting. Certainly a variegated one would be interesting.
M

I have planted one hardy kiwi vine and have two more on order. I also have wisteria in that order. This year I have planted 6 butternut squashes along the fence.

For the back fence I have 5 grape vines, with 4 different types in the set, on order.

There is a section of front fence which is less than a meter to some Miss Kim lilacs on one side and about 1.5 meters to some fruit trees on the other. As other ornimentals are so close I don't want a big garden python vine in that area so I think I will try clematis vines there.

I will then place a hops vine out a little farther and grow it up the guy wires supporting a telephone pole.

we have two Miss Kim Lilacs, they do well. If you research clematis, you will find some bloom in spring some in summer, some if fall. if you have the room getting one from all seasons could be interesting.
Ad

You are going to have quite the fence line. If you by any chance remember it'd be great to see an update at the end of the season or even next year.
You must log in or register to reply here.