What a wonderful world.

It's easy to complain and moan but we have a lot to be happy about; summer's here in the UK and we can get outside to potter around; what a wonderful world we live in.

What i nice video Colin.


It is indeed a wonderful world but spoiled by people.

Very good Colin, thanks for sharing it.
Ad

I can play that, I like it at a slower tempo with some jazz chords.

Herman's Hermits copied it too.. I pinched their ending.

What a shame Esther; it's "What a wonderful World by David Attenborough".

You're most welcome Logan.

Many performers copied each other Sean; some better than others; it comes down to taste in the end?

Some songs though stick in my head for days on end once I've heard them again; YouTube is brilliant for music videos; I've created a number of playlists of our favorites which we often play.

At the moment we're watching dozens of episodes of "What's My Line" the American series; no violence; no backstabbing and no swearing just good old fashioned family entertainment; pity most on TV these days is absolute rubbish.

What a shame Esther; it's "What a wonderful World by David Attenborough".

You're most welcome Logan.

Many performers copied each other Sean; some better than others; it comes down to taste in the end?

Some songs though stick in my head for days on end once I've heard them again; YouTube is brilliant for music videos; I've created a number of playlists of our favorites which we often play.

At the moment we're watching dozens of episodes of "What's My Line" the American series; no violence; no backstabbing and no swearing just good old fashioned family entertainment; pity most on TV these days is absolute rubbish.

I ripped a lot of music videos on YouTube as mp3s at one time, not so many these days. Then put them on a stick and put them in the side of a TV, to play through the TV speakers or in my Humax HDR and play throughh my hi-fi. I must have over 3000 tracks. Most people who do the same, will have many thousands more.

Then there's my jukebox wall boxes, where I can put in a coin select some recordings and they play mp3s via an adapter, va i-Tunes play list on a second hand third generation i-pod and then through my vintage hi-fi. Though many others I have are from my own CDs, others I originally downloaded from either Napster or AudioGalaxy, when they still existed. So some are about 20 years old.


As for TV I watch very little live. I'm tired of rubbish programmes fronted by so called celebrities. Dumbed down programmes like BBC Breakfast and "The One Show" I find unwatchable. Flicking across channels the other morning I couldn't believe they had the "Breakfast red sofa" in a naffin' farmyard. Why?
I read a letter in the paper the other day where a reader said "Naga Munchetty was the most irritating person on TV ." I agree and Matt Baker, Alex Jones, Kate Humble and Helen Skelton, just as bad.
BBC Daytime TV is a joke.

Well said Sean. First thing this morning I was watching TIG welding videos on YouTube they being of great interest to me; then I switched over to normal TV for BBC 1 News to find guys kicking a ball around again; if it wasn't for YouTube I'd brick our telly; why are we forced to pay for a TV licence that only applies to BBC which now puts out as much rubbish as the rest of the channels. Naga is brilliant compared to many of the other overpaid idiots. What happened to feel good movies; these are now replaced by endless violence and foul language; is it so surprising our younger generation practice what they see on TV?

I have a mini hi-fi in the workshop but it only plays CD's so limited to about twenty tracks; I've tried loading MP3 to CD cramming on about 200 tracks but with very poor playback; I'll eventually upgrade to a stick player but I'm too tight at the moment.

I've some more laurel stumps waiting to be dug up and I find this far more interesting than what is now entertainment on TV.

My favourite version of "Over the Rainbow," is by jazz tenor saxophonist, the late Ben Webster.

So much expressive emotion can be produced by this instrument in the right hands, unfortunately, nowhere near it in mine.

Colin said:
I've tried loading MP3 to CD cramming on about 200 tracks but with very poor playback
Click to expand...

The quality of the original recordings might be the problem.

YouTube videos are fine for downloading "throway" recordings as mp3s, as the quality is variable as the audio is compressed. The best versions to download are the "Official videos."

Some which individuals upload from their own recordings aren't as good, particularly those from 45rpm or 78rpm records.
Like this decades old one from an album of mine I uploaded. But for a little known tune by an unfamilar musician to most, it has had surprisingly more than, 20,000 hits and a lot of positive comments.

Thanks Logan & Sean for your replies.

It's so long ago I copied the MP3's I've forgotten the exact details; I think on the whole the songs either kept breaking up or simply playing a short while then drifting onto another song; these days of course CD's & DVD's are virtually obsolete; our car now three years old doesn't have a CD player installed it's now memory sticks or plug in some other kind of recorder.

I've played the same CD over and over hundreds of times really having it as background whilst I potter around.

I've a home made rack for CDs I made over twenty years ago out of parts of individual racks to fit the space available on a shelf in one of the top cupboards, in the big wall unit in our front room. They are above my collection of piano sheet music and some favourite vinyl albums, the rest of which I keep in a unit in our box bedroom. There's some other CDs in a drawer and some cassettes. 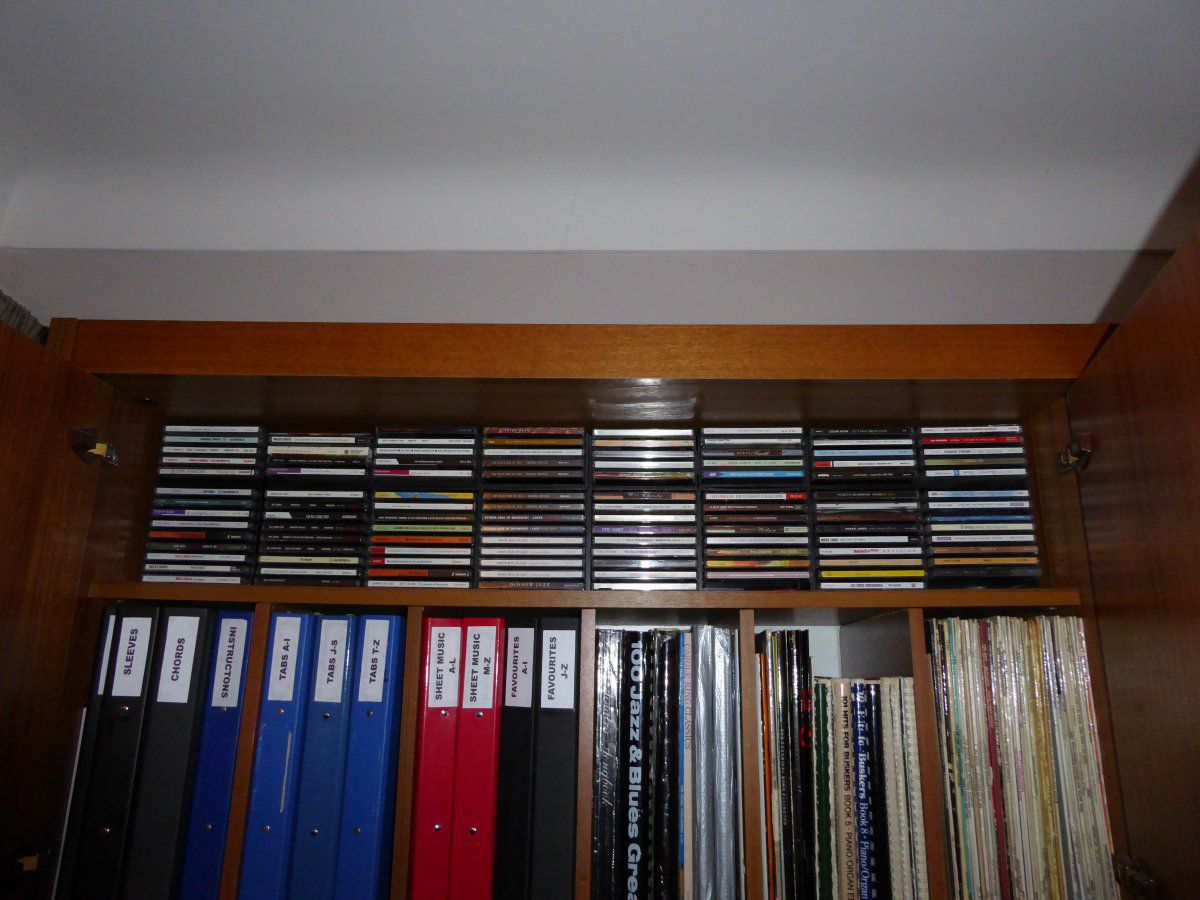 I must confess I rarely play any.

I have in the past burned my own CDs to play in the car, but I don't very often even play them, unless I'm stuck in a jam somewhere. I rarely turn on the radio.

This is really a throw-back to my time at work. I had the ability to not think about work, immediately I started on my journey home each day.

However, on my way to work the following day, I would plan out my day and go through stuff that might need my attention when I got in. To have the radio on or play CDs I considered to be a distraction.

We still buy DVDs but they're ultra hd and i play my CDs when I'm in the kitchen doing dinner or baking. Never have the radio on anymore.
Streaming films lose the quality of hd so we don't do it, but we hardly get a chance to watch one anyway.

I too never bother with radio and the Infotainment kit/screen in our Skoda Yeti is just an electronic ornament waiting to go wrong. Our Yeti also has the automatic stop/start which I detest so it gets switched off for every journey; it's actually the only part of our car we dislike; I'd have preferred it off by default to save switching it off; the Infotainment I can easily ignore.

I've not bought a CD or DVD for years.

The last two DVD's I bought were "Blade Runner 2049" and the last Jason Bourne movie.

However I confess to buying a box set a few of years ago of a series I'd watched on TV. There were six series so it is 18 DVDS.
I've watched them all since ..twice!

It was this one, starring Timothy Olyphant, in "Justified."

It has a wide appeal as there's an ongoing sub-plot, a romantic element between Raylan and his ex-wife Winona.

Someone made this video of clips, which has had many positive comments from lovers of the show.
The music choice to accompany them is quite appropriate.