Hi all,
I am trying not to be discouraged. I am super new at this. I bought transplant tomatoes, a banana pepper plant, and a bell pepper plant. They were doing fine for the first few weeks but over the last 3-4 weeks, they have completed stagnated. I keep waiting for them to produce more veggies and they will not.

One tomato plant produced two tomatoes that I think are still growing, at least I hope so.

The banana pepper plant grew one pepper and it seems to be done for the most part. I think it may be turning red. I saw a bit of discoloration. I wanted to wait until it turned sort of red before picking it.

The bell pepper plant is growing two bell peppers which I think are still growing.

But no other veggies are growing on them. The other flowers they produce that would turn into more veggies just aren't growing. Some have even dried up completely though I check and water them when they are dry.

Pictures are below. I also included what I fertilize them with. I think I added the Gro-Well about 4 weeks ago or so when I repotted them.

I am hoping someone can tell me how to get them to produce more vegetables. Any help would be greatly appreciated. 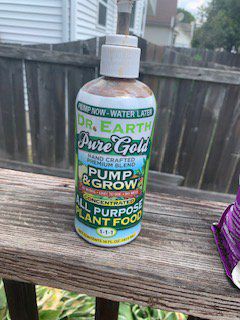 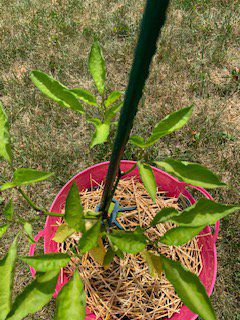 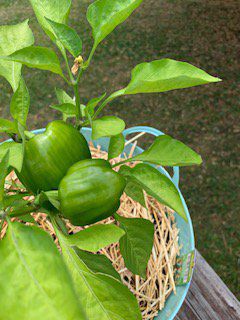 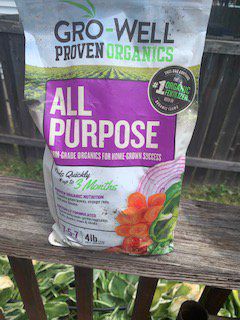 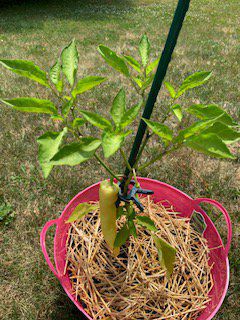 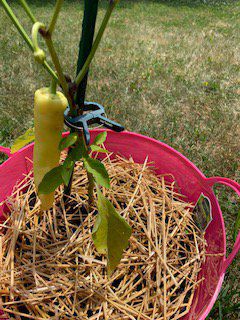 What are your nighttime low temperatures and what are your daily high temperatures? From the pictures it appears that your containers are too small. For peppers 4 gallon is minimum and for tomatoes 5 gallons. They are probably root bound and all of the roots cannot receive enough water or nutrition.

I was thinking I needed to plant in a bigger planter or feed them more. You've convinced me to repot. Thanks for the advice.

So I replanted the pepper plants in 7 gallon grow bags and fertilized them with a 10-10-10 mix and then followed up with some fish emulsion later on. I also took out one of the tomato plants that wasn't thriving and the other one seems to be doing better. I already have a female flower on my zucchini!
Ad

So an update for me: My remaining tomato transplant is thriving. I have harvested 2 tomatoes and many more are on their way.

I just harvested one of the bell peppers today from my bell pepper transplant. I see other buds on those ones too. I still think the pepper plants are growing very slow, despite being replanted in larger pots and being fertilized.

My blueberry transplant is coming along quite nicely. I know it will not produce fruit until next year. I need to research how to overwinter it.

My okra plants that I grew from seed are finally flowered and are growing little okra. I originally planted 4 okra plants but only two are thriving so I got rid of the other two.

I have 4 cucumber plants that I grew from seeds. They are all producing cucumbers. I harvested three today!

I planted two squash plants from seed that are finally producing female flowers. I haven't harvested any yet.

And surprisingly, the watermelon I grew from seed are finally producing female flowers. It took them so long that I kind of just gave up but continued to water them and gave them fish emulsion.

And lastly, I killed 2 of my 3 strawberry plants due to over-fertilization. The one I have left is thriving though. I must have gotten the fertilizer amount just right on that one.

I am pretty ecstatic about my progress so far. This is all so new to me and to be honest, I did not think it would work out. I learned so much and have really enjoyed my garden.