Working with potted indoor plants can be tricky sometimes. Is the plant too wet? Is it too dry? It's a real pain always having to guess right before doing the ritual of sticking your finger 3 inches into the soil to see if it feels moist or not...all the while wondering if your hands might have any spores of harmful fungi that could be potentially fatal to your plants. I often cleanse my hands with a little white vinegar before performing this ritual as a precaution. So anyway, I've been looking around at some of the available choices on the consumer market, and to be honest, most of them seem to fall short. Of course, I am aware that a tool can never fully replace human intuition and discernment. So in either case, here are some of the "better" models...and my critique of them. 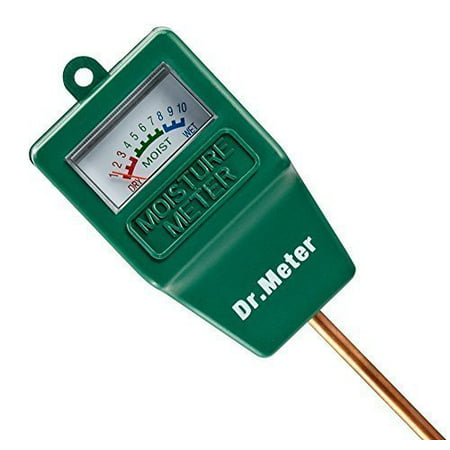 Out of all the meters ("testers") on the market, none receive more praise than this Dr. Meter. Yet in spite of all the good reviews, there are also enough ghastly ones that it makes one think twice before putting their faith in it enough to actually buy one. Also, it's made in China and has a rather unattractive and cheap looking housing. 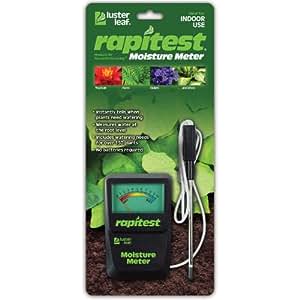 Next I come to this much more professional looking Rapitest. Cosmetically it certainly looks much better. I have read that it's even made in the USA. It has to be good if it's made in the USA, right? Well, not according to a lot of the reviewers on Amazon. Needless to say, I skipped this one too. American manufacturers need to earn the loyalty of their customers, not just merely assemble a little contraption and call it a "moisture meter" when it apparently doesn't even work properly. European gardeners would never put up with faulty equipment like this, and neither should gardeners in North America. 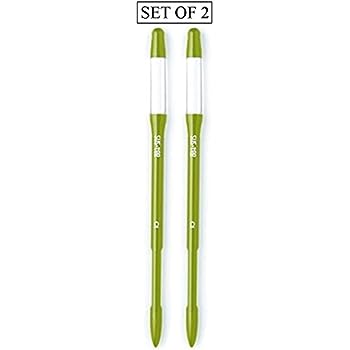 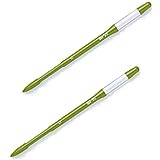 This neat little design from Japan features a color indicating core that changes color depending on whether the soil is wet or dry. They even offer them in different sizes for different jobs. I do have to give the manufacturer some credit here, it's a great concept. Simplicity and elegance. Unfortunately, it does appear to have some major design flaws; first among these flaws, is that the way this meter reads moisture levels is apparently very black & white, having only two colors indicating that the plant is either watered or needs to be watered, there is no third color to denote a congenial balance between "wet" and "dry" inside the soil. I doubt that it even signals differing shades of the colors in order to show the degrees of severity between each corresponding condition. If this device won't even show the user what is in-between the two polar opposite readings, how are they supposed to know? It would really seem to defeat the entire purpose of having one. If that isn't bad enough, the color indicating core needs to be replaced with a new insert every 6-9 months, which means more money. If the color indicator gave more precise readings, I could see it being worth that, but not in its current form. Despite the teething problems of this new design type in its infancy, this concept does show a great deal of promise for the future. There just needs to be more research and development in its evolution. As of the time of me writing this, I will wait until they improve upon this design. 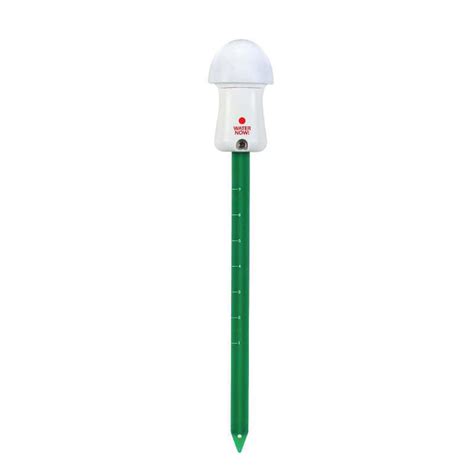 After being frustrated by all the bad choices, I eventually went out on a limb and decided to give this one a try. It is powered by a small watch battery and has a feature that the Sustee lacks: three colors. When I received it, my initial impressions were kinda skeptical. The box it came in had no particular brand logos or markings on it. The small instruction sheet that came with it clearly said "made in China." I did do a little dry run using this to make sure that something would happen whenever it was placed in the potting soil, so at least I know that the color flasher works. Does this thing give accurate readings though? So far, it's a little hard to say. One of the problems I have with this device, is that it is positively tiny - like only 6" long from the top of the light to the end of the rod. It might do very well when used in smaller pots, but I don't have any small houseplants; just a very large one that sits in a big six gallon pot. I know, I should have read the item description more carefully. Can a rod so shallow give accurate readings? I guess it might if you're comparing it with a human finger. I don't know about this one. Based on what I know about this meter, I can neither recommend this one nor entirely condemn it.


Note: There seems to be a few very high end models that have triple digit prices. I know very little about them, which is why I didn't include them in this list.
Ad

The ghastly reviews most often come from those that misunderstand how an oxidation layer of mineral can build quickly on a probe and shut off or insulate any hope of electrical signal. While powered units may overcome this issue via a more rubust energy state, passive units relying on dissimilar metals or magnetism are easy to defeat, so a soak in something acidic like vinegar cleans the metal and restores connectivity where a microscopic layer of oxides and even nitrides lay prior.

You should use these gardening tools to measure soil moisture, pH and then you can take necessary steps accordingly.

I reckon these sort of gadgets are just a complete waste of money. My plants usually manage to let me know when they need a drink.

Tetters said:
I reckon these sort of gadgets are just a complete waste of money. My plants usually manage to let me know when they need a drink.
Click to expand...

Yes unfortunately for me you seem to live in an area that is hopelessly fantastic for certain plants (oh say roses to be combative) compared to my area. on the good side, it was finally below 70f at 6am (21C) and I have been busy getting ready for our "hidden" growing season as we do rarely stay below freezing much more than a few hours overnight.

Have you considered moving ?
Ad

Tetters said:
Have you considered moving ?
Click to expand...

I wonder if I could get used to air one does not have to part with a billcap or other pointy instrument.