Should I remove this ?

Yes @Stedavey those are the ones to pinch out. This may be of use to you

Stedavey said:
So as we all know on tomato plants you have to remove the little shoots that grow in the middle of the stalk ...
Click to expand...

I think the video I included makes it fairly clear that the ''bush type'' tomatoes don`t need pinching out the same way as the cordon ones.

Well, I didn't hear the words "determinate" or "indeterminate" in your video nor the word "cordon" ...but maybe I missed it.

I like the way Mother Earth News views it: "Side shoots, or “suckers,” are additional fruiting stems that emerge on tomato plants at the junctions of the main stems and leaf stems. Some folks recommend that gardeners prune tomato plants by removing all tomato suckers; I disagree. Contrary to what many think, suckers don’t sap energy from the main tomato plant, and allowing them to develop will not delay fruiting or ripening of any tomatoes from the main stem. Judicious removal of some suckers, however, will lead to more controlled growth and make supporting the plant easier, especially with an indeterminate variety.

Should I Prune My Tomato Plants? | MOTHER EARTH NEWS

The Northern Homestaed pretty much agrees:
"To prune or not to prune tomato plants is an option tomato growers have. Not all tomatoes need pruning, in fact some should not be pruned except for the bottom leaves and possibly at the end of the growing season. Some growers decide not to prune at all, and some go over the top with pruning. Whatever you decide, here are some things that are good to know about pruning tomato plants.

There are two main varieties of tomato plants: Determinate and Indeterminate. A seed package will tell you what you got. I don’t know of a way to tell if a plant is determinate or indeterminate by just looking at a young plant."

Further, The Spruce reafirms that it is an optional action: " Some controversy exists over whether or not tomato plants should be pruned, and the reality is that if you don't, it will not cause problems. Plenty of people do not prune at all and still grow good tomatoes. Tomatoes are not one of those plants that require pruning or deadheading in order to thrive, but shrewd pruning can improve the quality of the fruit you harvest.

I think this is a difference in culture. In the UK most tomatoes are grown in greenhouses and are the side shoots removed to keep the plants under control so as to allow free movement around the greenhouse, air circulation around the plants. Also the UK has a shorter growing season and so the grower wants the plant to "concentrate" on producing ripe fruit. As in the UK most tomatoes in greenhouses are in containers root runs are restricted and feeding and watering regularly are essential. Even commercially tomatoes are side shooted over here. I have seen tomatoes grown as twin cordons. Normal advice in the UK is to pinch the top of the plant out after the sixth truss has formed.
In the UK the terms determinate and indeterminate are not particularly common,bush and cordon being used, the video is clearly a UK video.
This is a case when good American advice is not really applicable to UK conditions.
H

Here in the UK, we don't have the light levels that N. America gets, and that's why we remove those sideshoots from indeterminate (vine or cordon) plants. If you remove them from determinate (bush) tomatoes, you'll get no tomatoes. If you let me know the variety of tomato, I'll let you know whether to remove them, although I'm as sure as I can be that it's a vine (cordon) in which case remove it.
In fact, from where that sideshoot is, I'd bet you bought this as a plant or were given it, rather than growing it from seed, and the reason I reckon this, is that the sideshoot is so far up the plant that there would be other sideshoots further down, but they were removed prior to your possession of the plant. In which case, go ahead and remove it.
If you get a 3-4" plantpot filled with compost or soil, make a hole with your finger and stick the sideshoot stalk in it and keep it damp, you'll probably get another plant.
It is actually the case that tomatoes perform better in terms of quality, size & overall yield (in terms of area) if they are treated in the same fashion, but is less important than here, and far more work is involved, which is why it doesn't tend to happen there.
Last edited: May 17, 2020

headfullofbees said:
...
It is actually the case that tomatoes perform better in terms of quality, size & overall yield (in terms of area) if they are treated in the same fashion, but is less important than here, and far more work is involved, which is why it doesn't tend to happen there.
Click to expand...

In 50 years of growing them, I have not found the above to be true. Certainly not the implication that more work is less favored than results. Space limitations can be a viable reason to terminate suckers...but quality, size, and yield are not.
Pruning is optional, regardless of location, and should be driven by the space available or not available.
H

It is customary to grow single/dual stem tomatoes at closer spacing, such that the yield from a set area is as good or better, and such that the plants shield each other better from harsher sun.
The improved quality of pruned plant tomatoes was established in scientific papers from 1950s onwards.
Growing single stem tomatoes allows better airflow, which in cooler, damper conditions, helps to keep fungal diseases in check.

Link please on those "scientific papers"...I've seen many more recent that do not agree and in fact clearly say "space" can be a determining factor but quality is not. My own studies confirm.

I can and do get airflow with spacing.
Ad

This area of discussion has been done before. In fact, @headfullofbees sent me a packet of indeterminate cherry tomato seeds 2 years ago and I planted them side by side. I grew some by pinching off the suckers and/or side shoots and some I just left alone. The unpruned ones had at least a 6 to 1 ratio of tomatoes, probably larger before a hailstorm flattened them. Two things were proven, One is that unpruned indeterminate tomatoes produce a much larger yield. And two, each stem whether pruned or unpruned will have the same amount of tomatoes when growth time is equal. I took pictures at the beginning of the test of both the pruned and unpruned but failed to take pictures during the fruit ripening so there is no proof of what I say. IIRC each unpruned plant had at least 7 fruit-bearing stems. All plants had the same number of trusses on the original main stem. In this case, they all had 9 trusses on the main stem and at the time of the hailstorm, all of the unpruned plants had an equal number of trusses per stem. Also, with this particular variety of tomato, I experienced zero sunscald on the pruned plants, even though there was very little foliage. As far as the quality and size of fruit they were all indistinguishable.

I have never been to the UK so I cannot attest to the amount of or lack of sunlight nor to its intensity but I have come to the conclusion that this conversation about pruning or not pruning and spacing is irrelevant simply because of the sunlight/climate difference. We, here in the US and they in the UK, simply cannot fathom each others way of doing things because this is the way it has always been done.
H

I don't deny for 1 second that unpruned tomato plants give a bigger yield per plant, but since pruned tomatoes can be planted much closer together, this compensates.
It is also the case that pruning lengthens the season, because you start getting tomatoes earlier.

headfullofbees said:
I don't deny for 1 second that unpruned tomato plants give a bigger yield per plant, but since pruned tomatoes can be planted much closer together, this compensates.
It is also the case that pruning lengthens the season, because you start getting tomatoes earlier.
Click to expand... 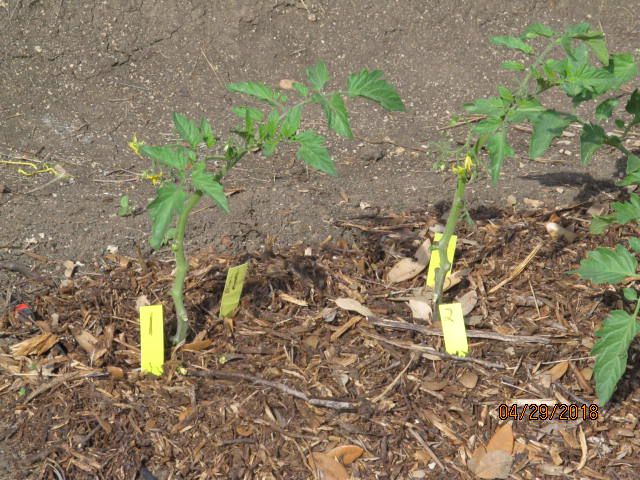 Meadowlark said:
Link please on those "scientific papers"...I've seen many more recent that do not agree and in fact clearly say "space" can be a determining factor but quality is not. My own studies confirm.

I can and do get airflow with spacing.
Click to expand...

Tomatoes are one of the most popular crops among home gardeners, and with good reason: not only are tomatoes delicious and versatile, they are relatively easy to grow and return high value for the space they occupy. No store-bought tomato can compare with

In the UK I would advise pinching out the side shoots on vine tomatoes. You can tell them as they grow 45 degrees between a leaf shoot and the main stem. This diverts plant energy in to growing the fruit and not growing excess foliage. It also means that fruit will start to develop earlier and ripen quicker.

Never prune determinate or bush tomatoes. This will defiantly reduce the yield.
Ad