I've lived in my current home 2 1/2 years in a rural position in the Scottish Highlands. I'm in the process of retrieving my gardens from nature but having to work with it not against it. My home is 22 years old and built on ex crofting land, so surrounded by fields and woodland. I have good reason to believe that our septic tank drainage has had no maintenance since installation. There is one solids tank and a pump that feeds liquids from there into two other tanks that are filled with peat, this in turn filters the liquids before they disperse into a soakaway. It's the soakaway that has become a problem.

My garden is on an incline with a bank that drops to slightly lower ground where the tanks are situated, they are across the width of the garden. Beyond that is a field that until recently contained part of the soakaway. The picture below shows the lids of the solids tank in the corner and the pump chamber lid in the foreground. 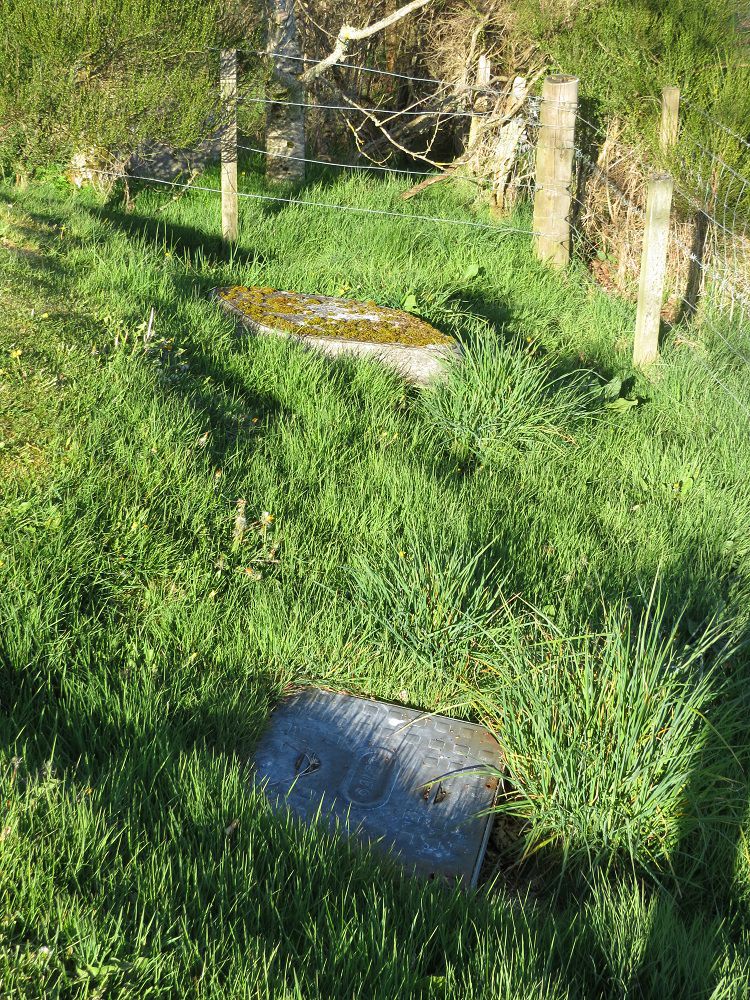 The other tanks are across the other side of the garden. The soakaway is on the left side of the picture between tanks and fence and continues on down into the field beyond. 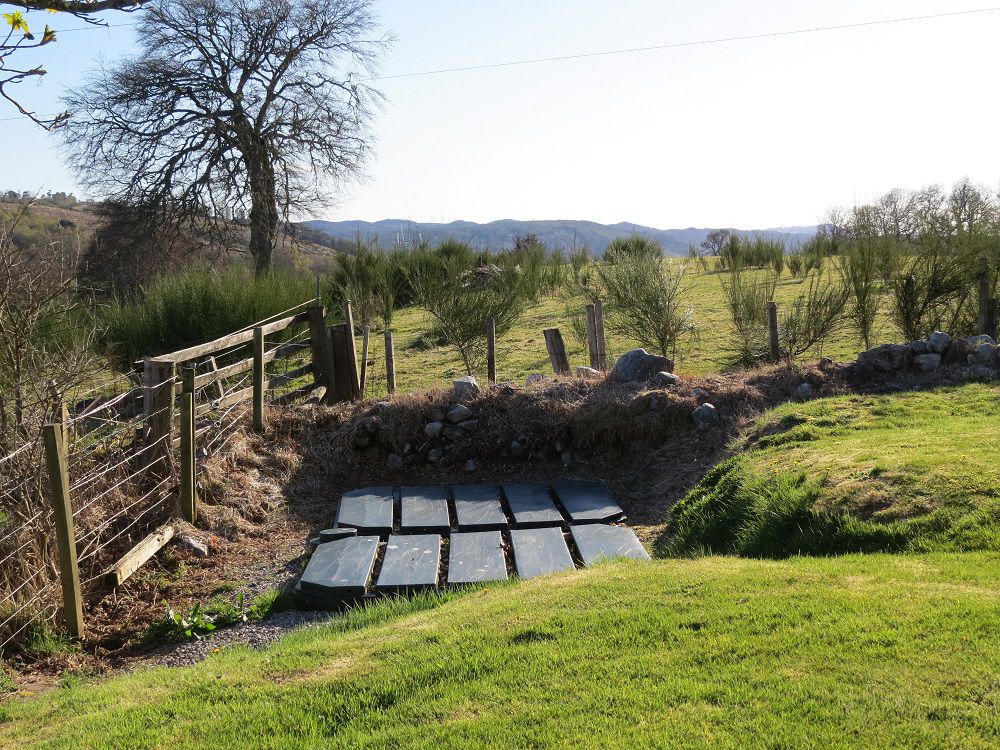 The liquids are no longer dispersing underground but coming to the surface and creating a boggy area. What is being released must still be filtering well as cows that are in the field from time to time have been drinking it. The work started with the felling of this Sycamore tree roughly 30ft in height (just a baby really), it's roots not in an ideal situation between the tanks where the pipework runs left to right. 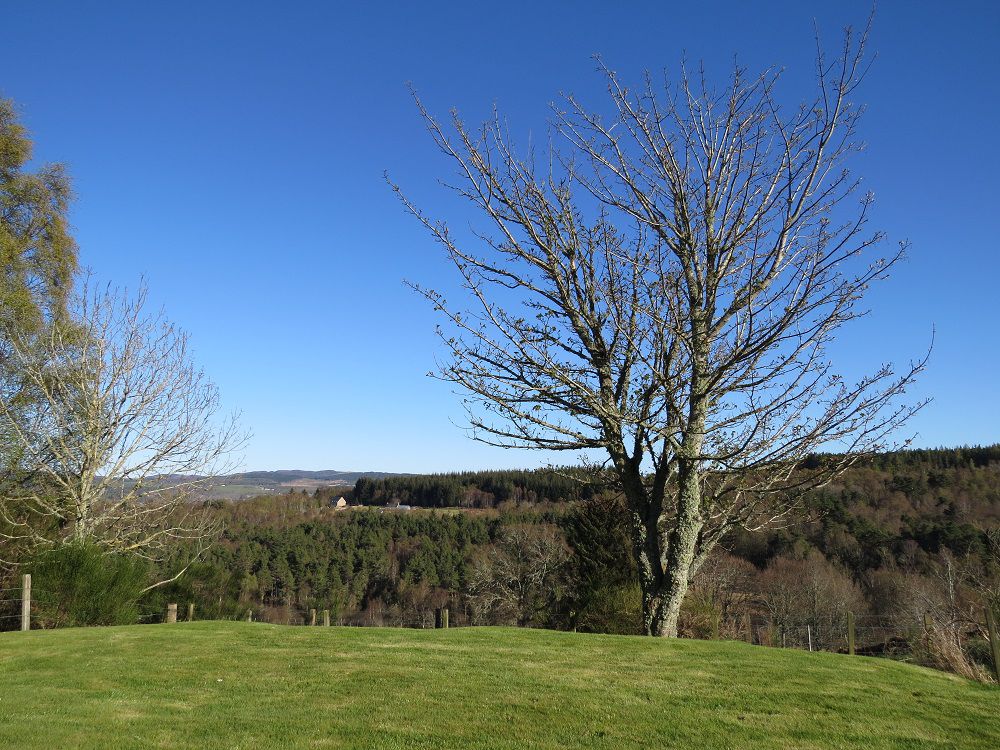 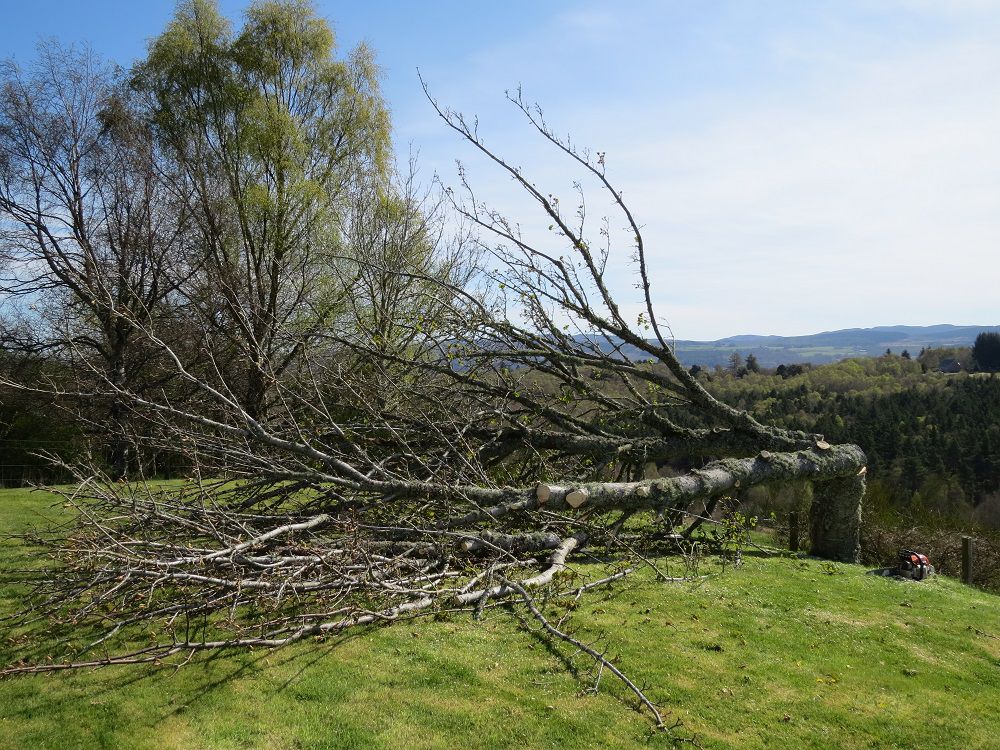 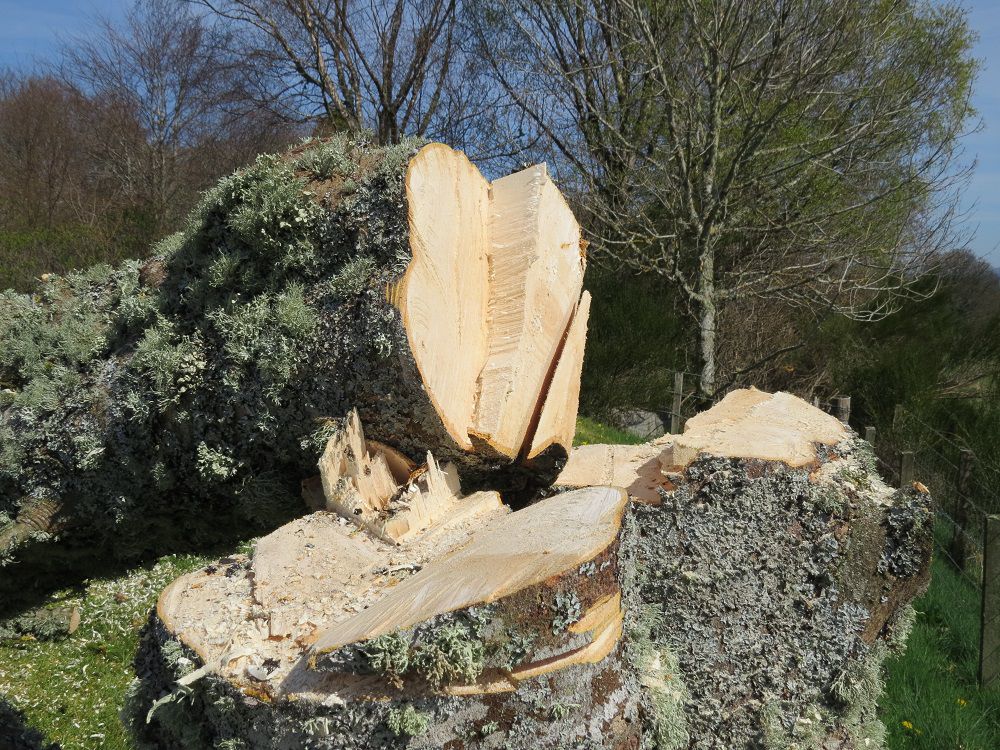 The 'boys toys' are moved in and work starts on the soakaway. I will refer to the man carrying out the work as 'A'. We know him well as he's carried out various jobs for us. The aim is to change the route of the soakaway and pipe it further towards the right in a trench, where there is the remains of a dry stone wall. 'A' spoke to the owner of the field asking permission to re-site the soakaway which wasn't forthcoming, he wanted it left as it was. We have no idea why. 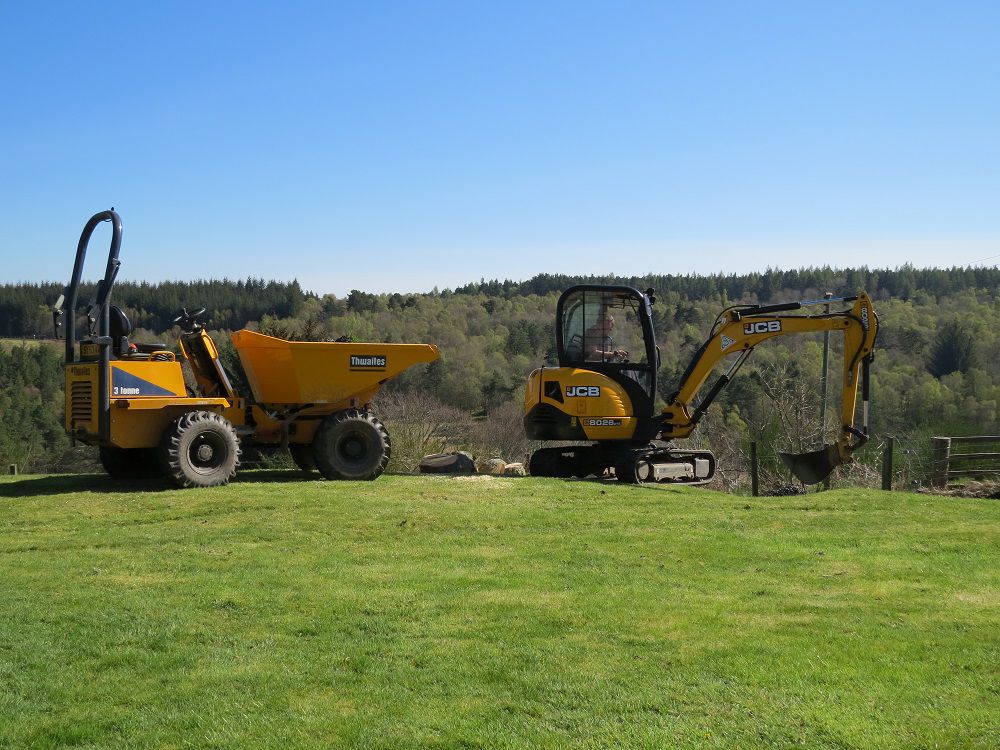 With the gravel removed from the trench it immediately filled with liquid. No surprise with the ground being saturated. We also had to have a re-think on where the new soakaway was to be sited. Having mulled it over and idea came to mind. My husband made contact with the owner of the field to the side of our garden and asked permission to re-route the trench and soakaway into his field. Good man! He didn't see it as a problem. 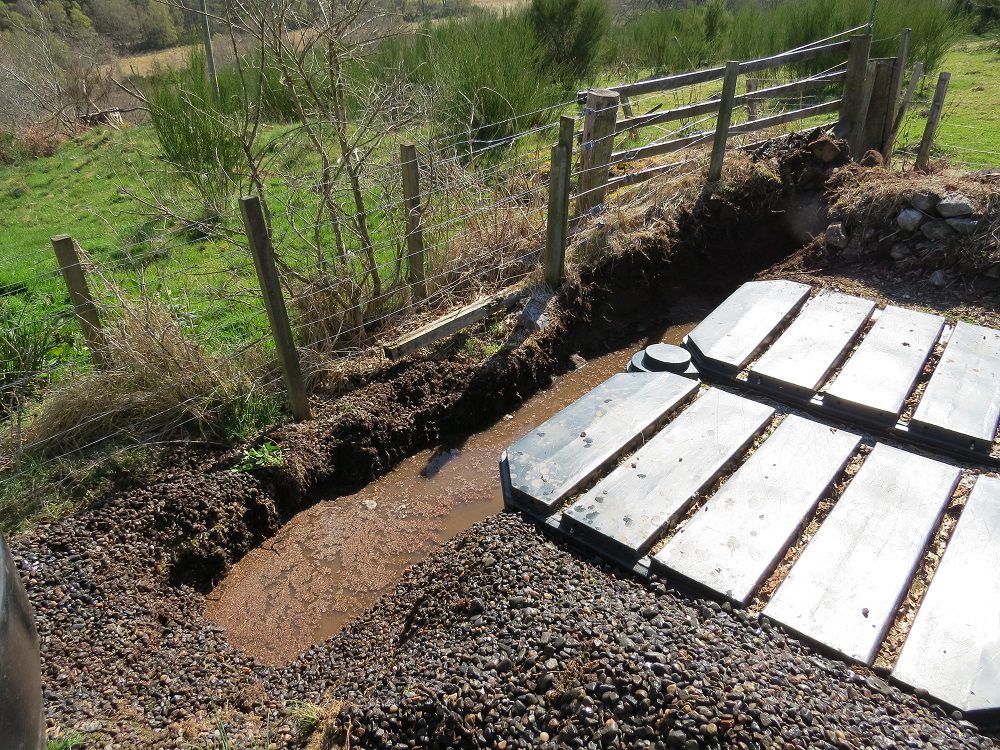 'A' laid a perforated pipe in the trench and refilled it with fresh gravel. The far end is left open to join pipes as work continues. On the boundary with the adjoining side field are the remains of the dry stone wall which will need to be dug out for the trench to continue. Meanwhile back at the solids tank. 'A' had recently discovered that there were two 6ft rods jammed in the pipework that were creating a 'dam' regarding flow from the house to the tank. Someone has obviously tried to free a blockage in the past and failed, getting the rods jammed. 'A' tried to pull them out but no luck, so had to dig down to the pipe to remove them, cutting the top off the pipe. Rods removed he repaired the pipe and back filled the hole. 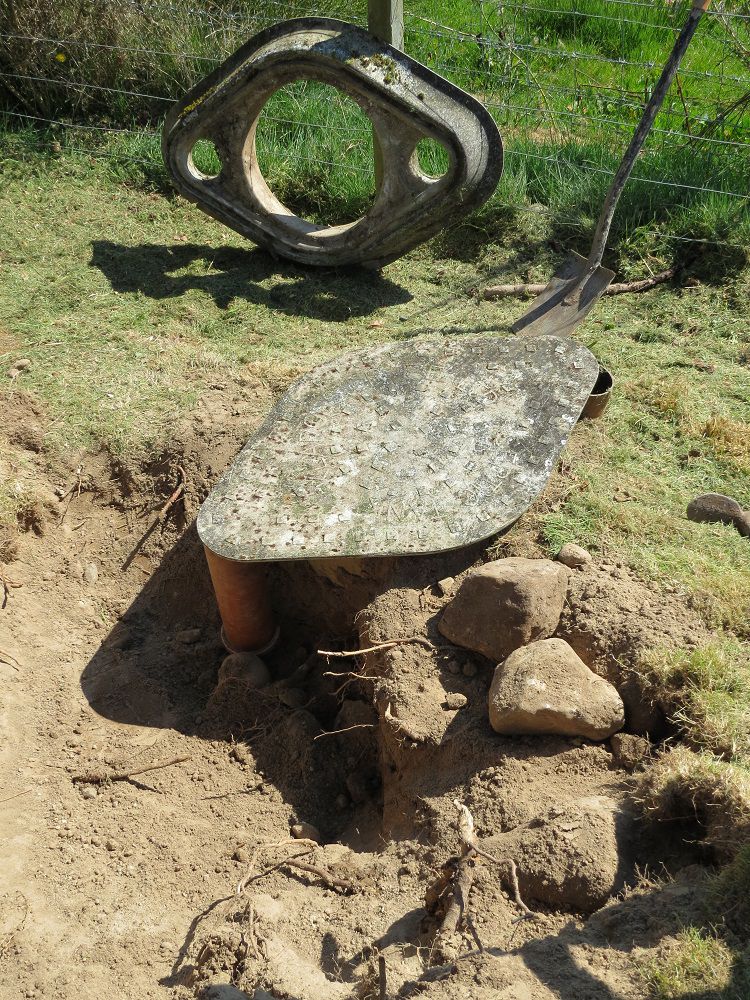 Back at the other side of the garden digging is underway again. Below you see the remains of the wall. 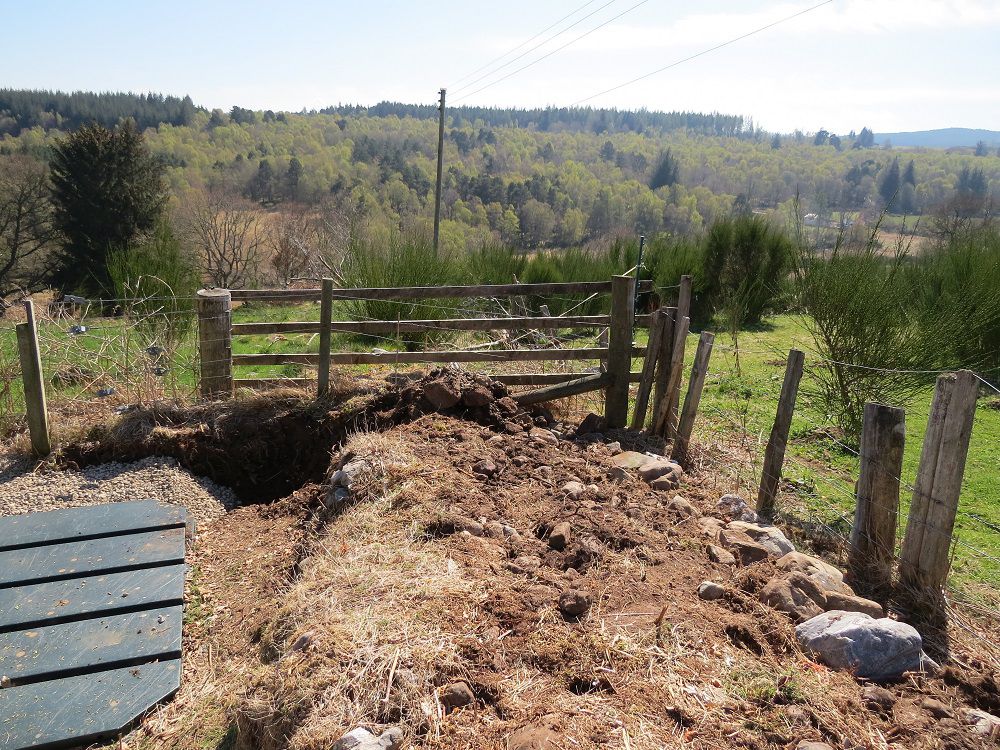 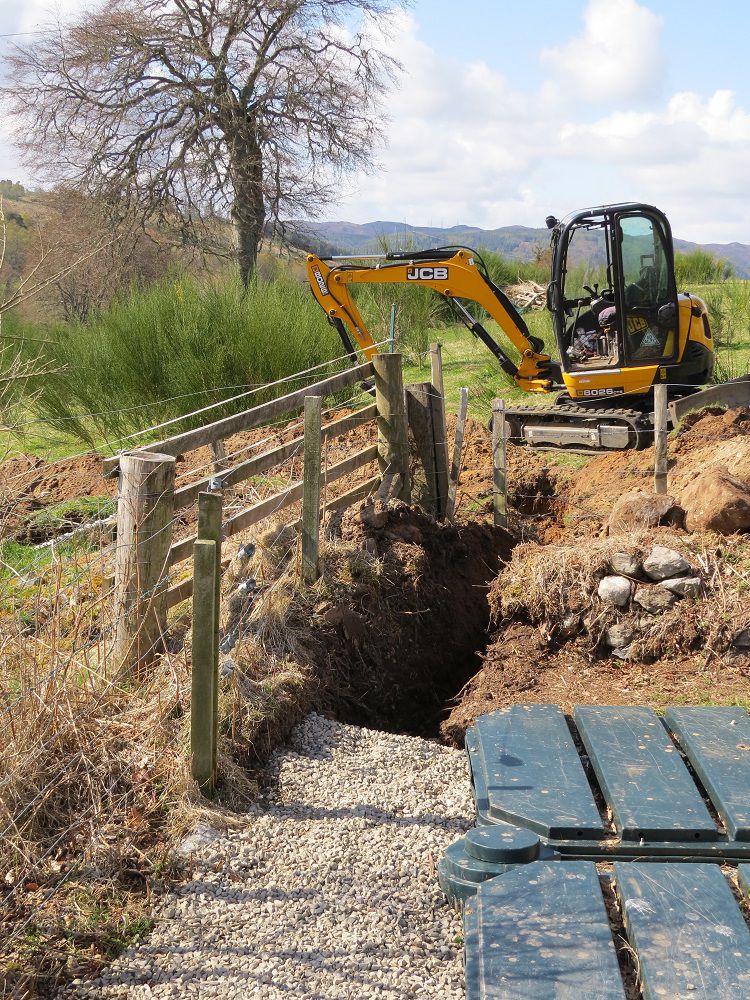 The trench now dug and ready to take more perforated pipe along a 25 metre (82 feet) stretch down in the side field. The soil here is sandy loam so drains freely and we're hoping that with the perforated pipe a soakaway won't be necessary. 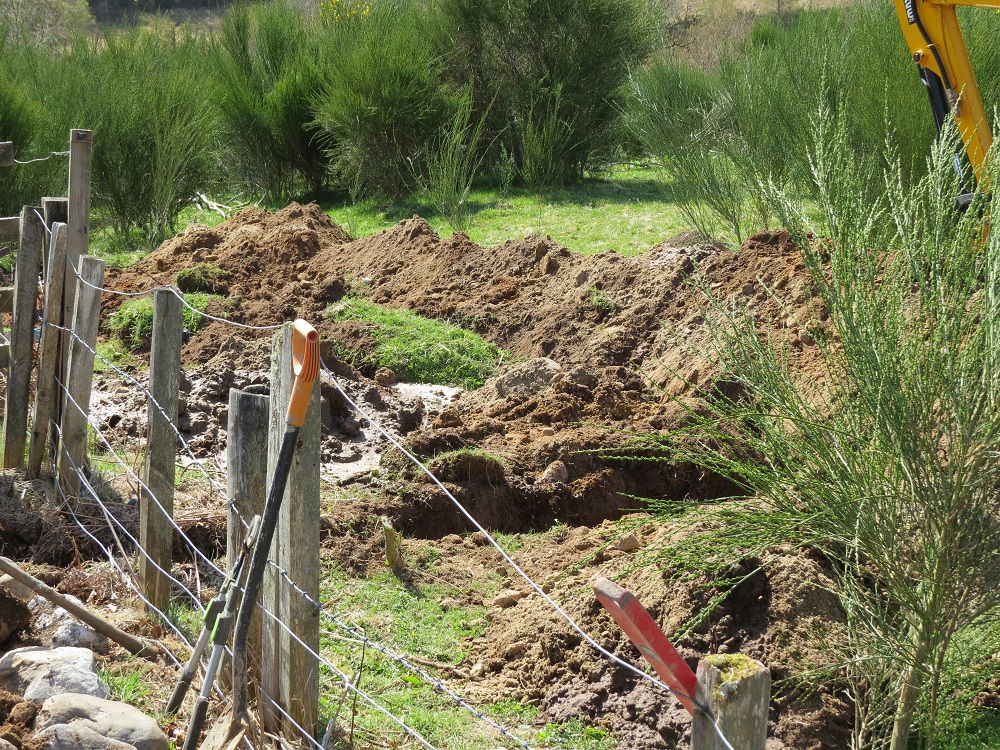 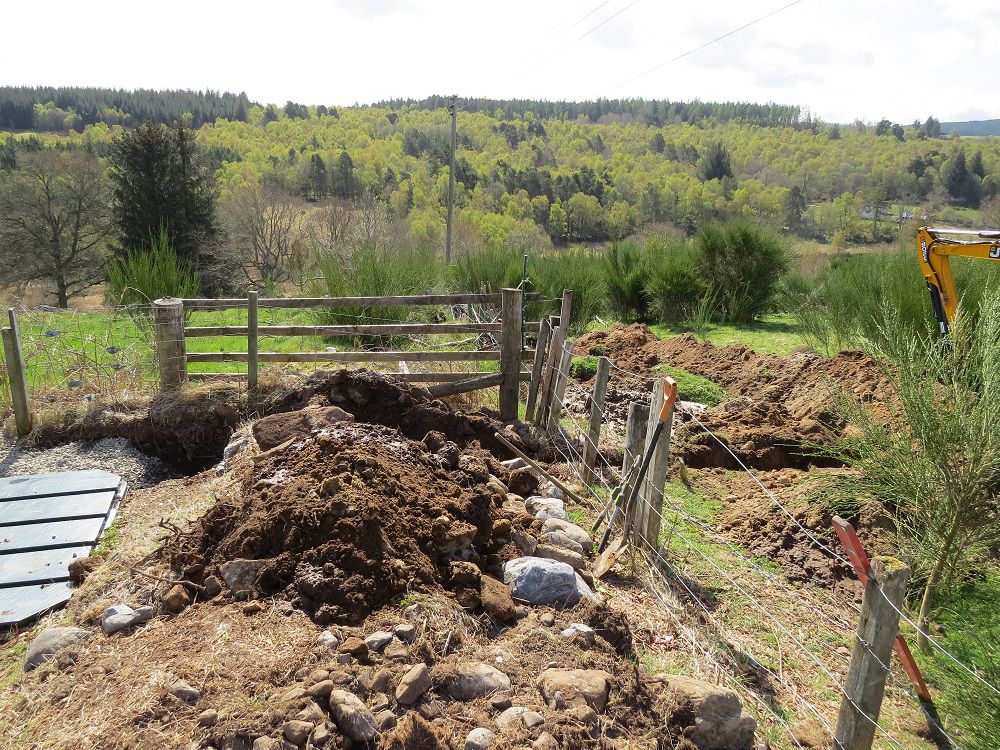 The pipe is laid and joined to the one in the garden, the trench then back filled. During the process of this 'A' had an audience. There are three horses in the field that stood close by watching the process. 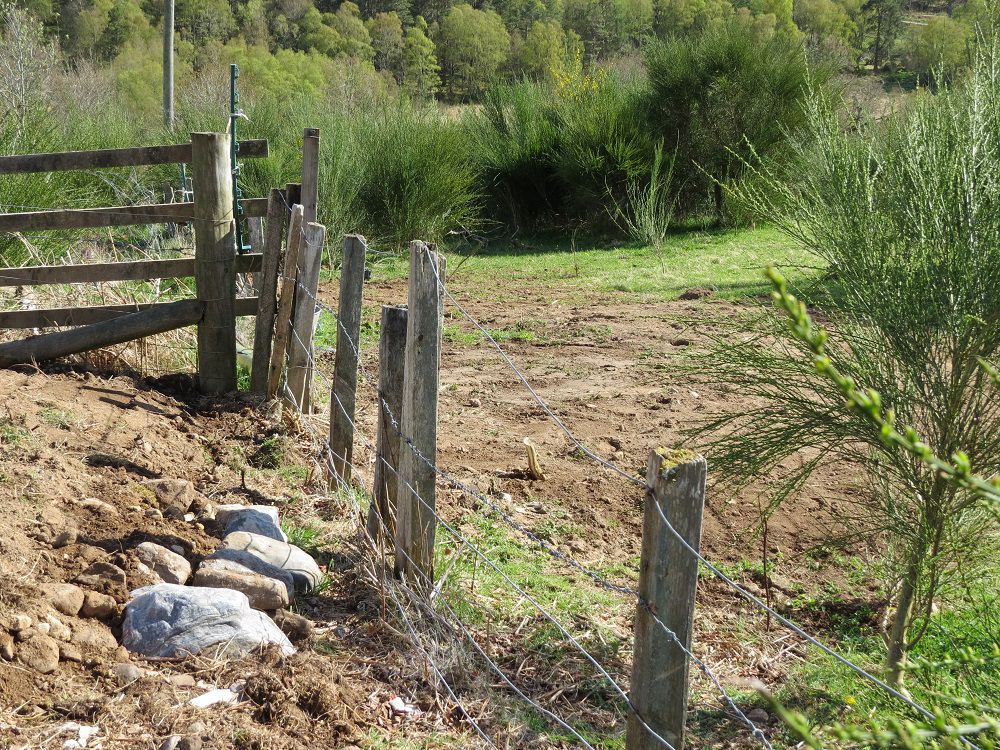 The job complete I now have to do something with the remains of the boundary. Until late last year a third of the 'wall' which stretches along the plot from the back to the road at the front was covered in bracken. I'm hoping I've killed that although it's still a little early in the year to see it sprouting. 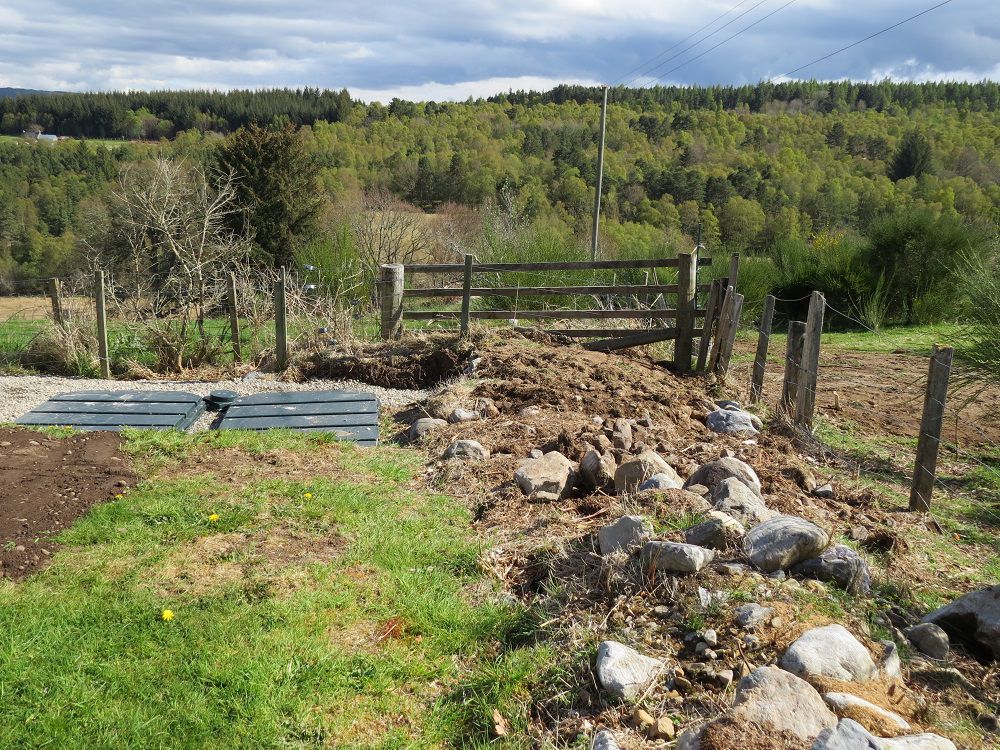 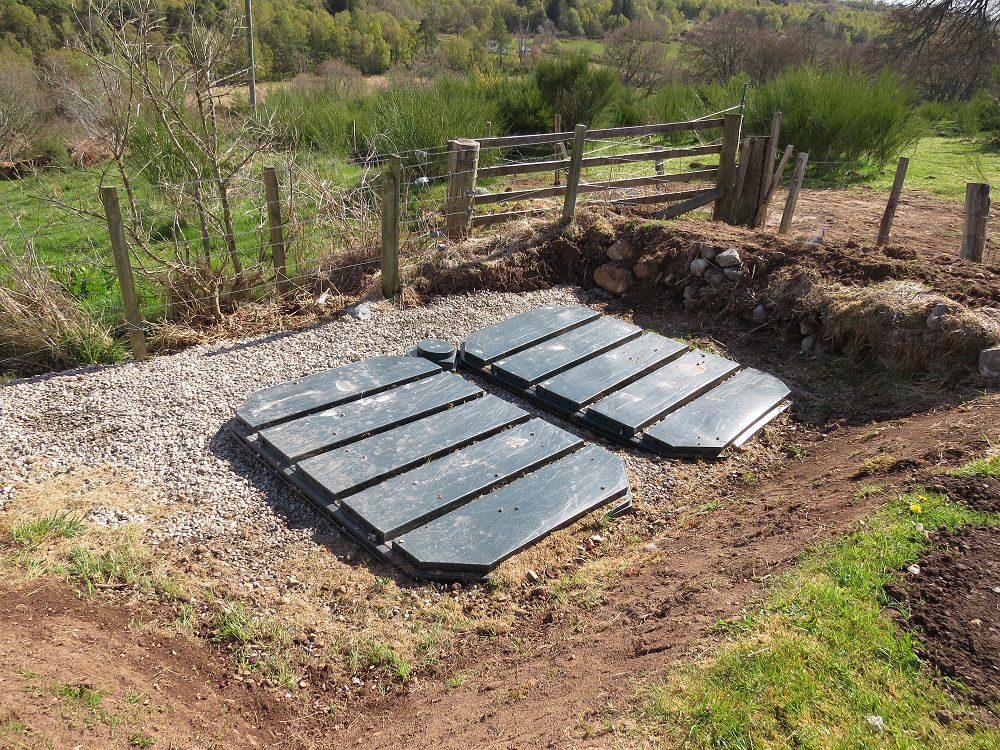 'A' has also rebuilt the bank which was disintegrating into the back field. 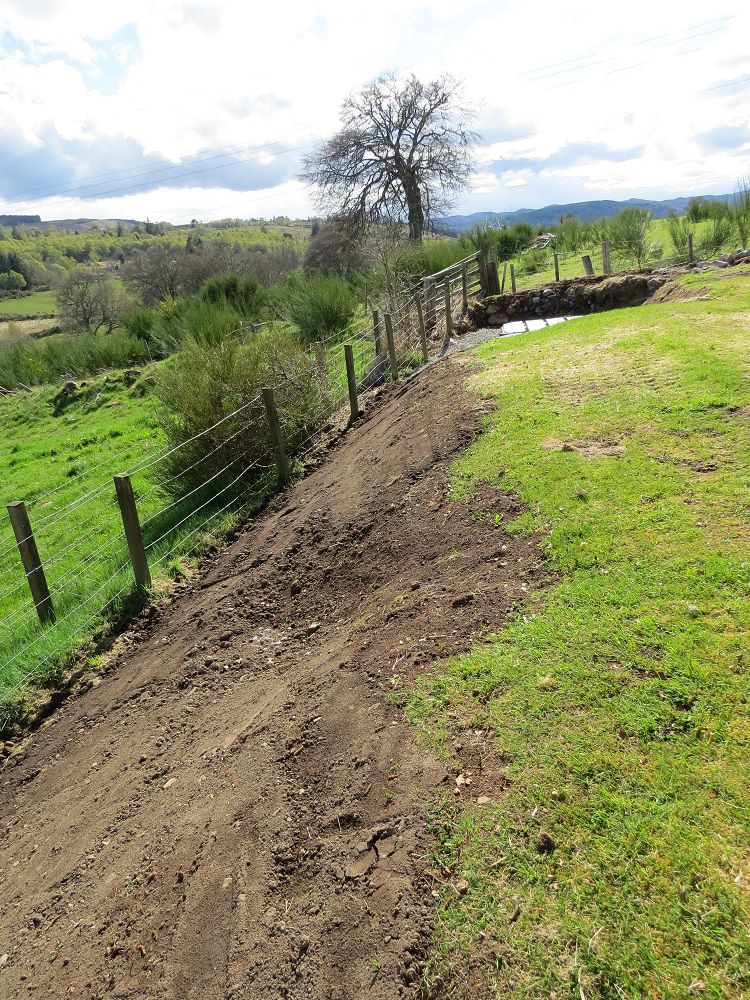 Where the smaller rough patch is by the tanks I'm in the process of making a couple of steps down. 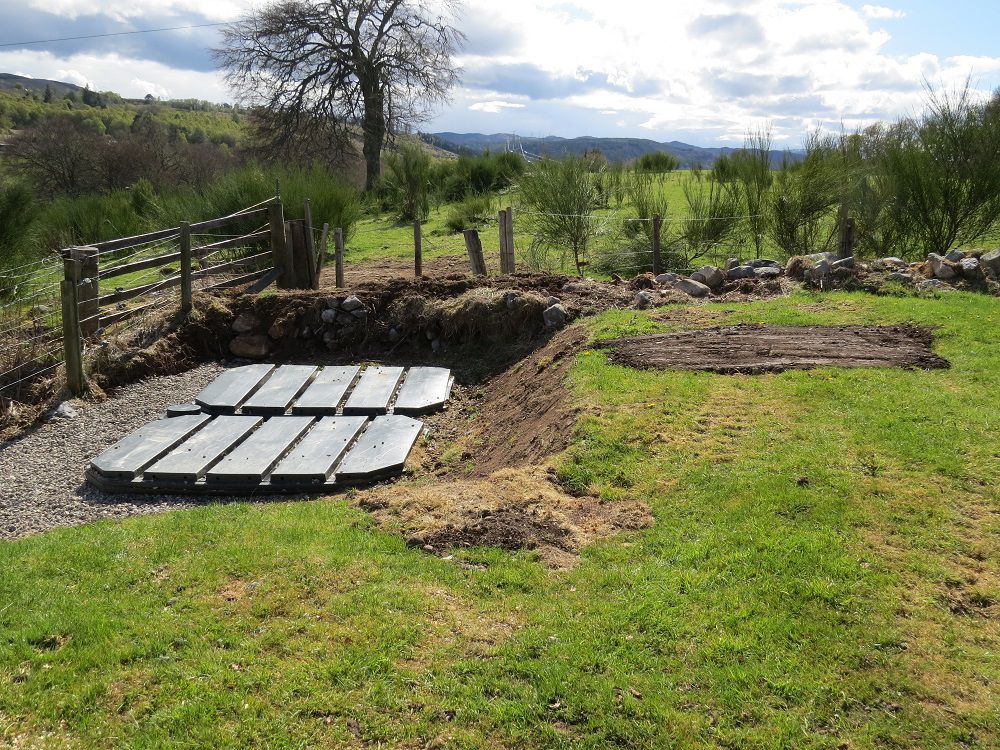 And the view without the Sycamore - this sold the house to us. With the garden almost bare I'll be planting a couple of trees and also a low hedge at the base of the bank to help anchor the soil. The rest of the bank will be grass seeded. 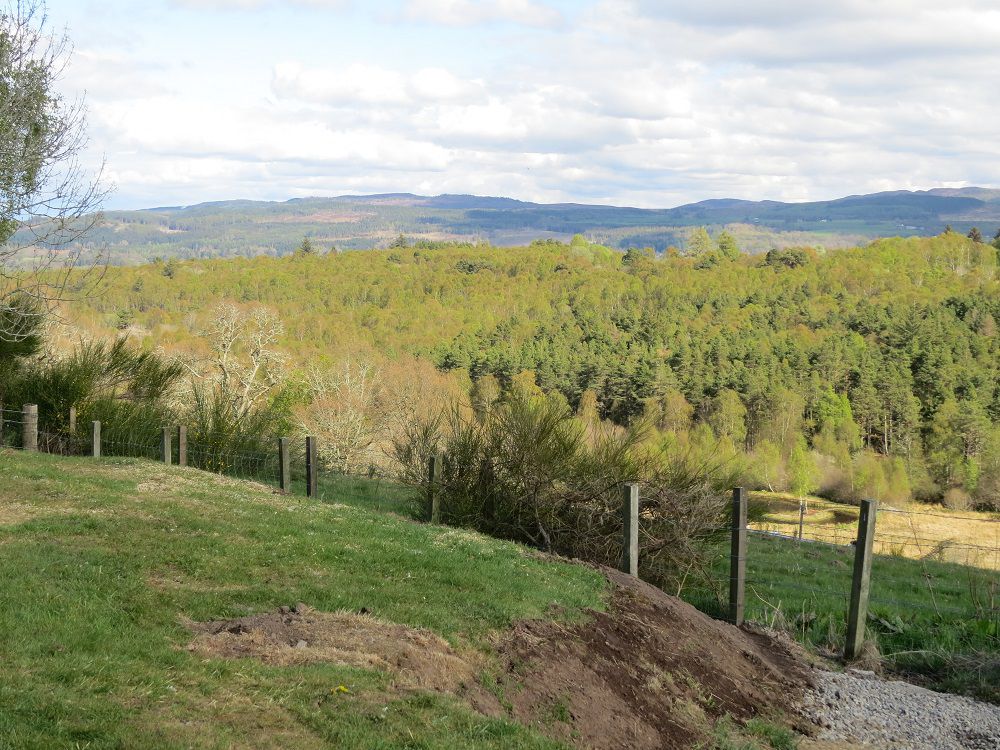 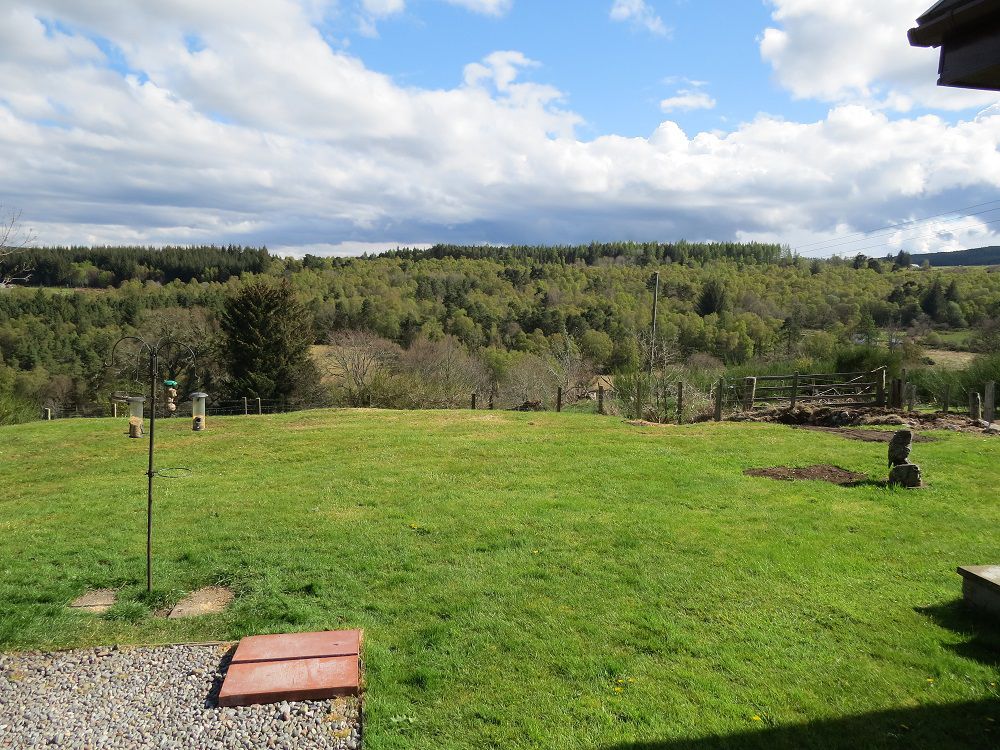 That's all folks, thanks for being patient.

I reckon it`s YOU who had to be patient! What a lot of work and hassle. I vaguely remember you trying to decide which roses to plant in that corner and maybe the planting can now begin.

The view is stunning.

Interesting project...and you told it well. Looks like you had access to the right equipment which makes a huge difference.

Tetters said:
I reckon it`s YOU who had to be patient! What a lot of work and hassle. I vaguely remember you trying to decide which roses to plant in that corner and maybe the planting can now begin.

Thanks Tetters. Unfortunately roses are out of the question, they don't grow well here and there's very little soil in that area for them. I also need to partly re-build the wall as it marks the boundary, not the fence. I may turn it into a rockery but I'll decide as I go along.
Ad

Thank you Meadowlark. A digger was the only way to take on the task an that was owned by the person who did the work for us.

It's getting there @zigs. Still a lot of work to do in both back and front gardens before I get them to a reasonable state.