It told me it was "beyond it's seviceable life" and refused to work about four years ago, but you can get around that by re-setting it if you know which buttons to press.

It served me well, it had the facilty to make contact prints from transparancies and also save them to a computer so I did a few box-fulls of family photos that were languishing in a bottom drawer. We no longer have projector or viewer, does anyone? But it didn't like Windows 10 and each update made the connectivity more difficult. It started only wanting to make only one print to each sheet of paper and yesterday it refused to work at all. My tame computer repair shop said they've experienced the same problem with other customers similar printers and were unable to help.

So I've bought a Canon TS8351. It's less than half the size of the Epson. It was a lot cheaper than the Epson, only £100, but still took six ink cartridges like the Epson, for better definition. I've checked and you can get compatable cartridges at half the price Canon would charge you. 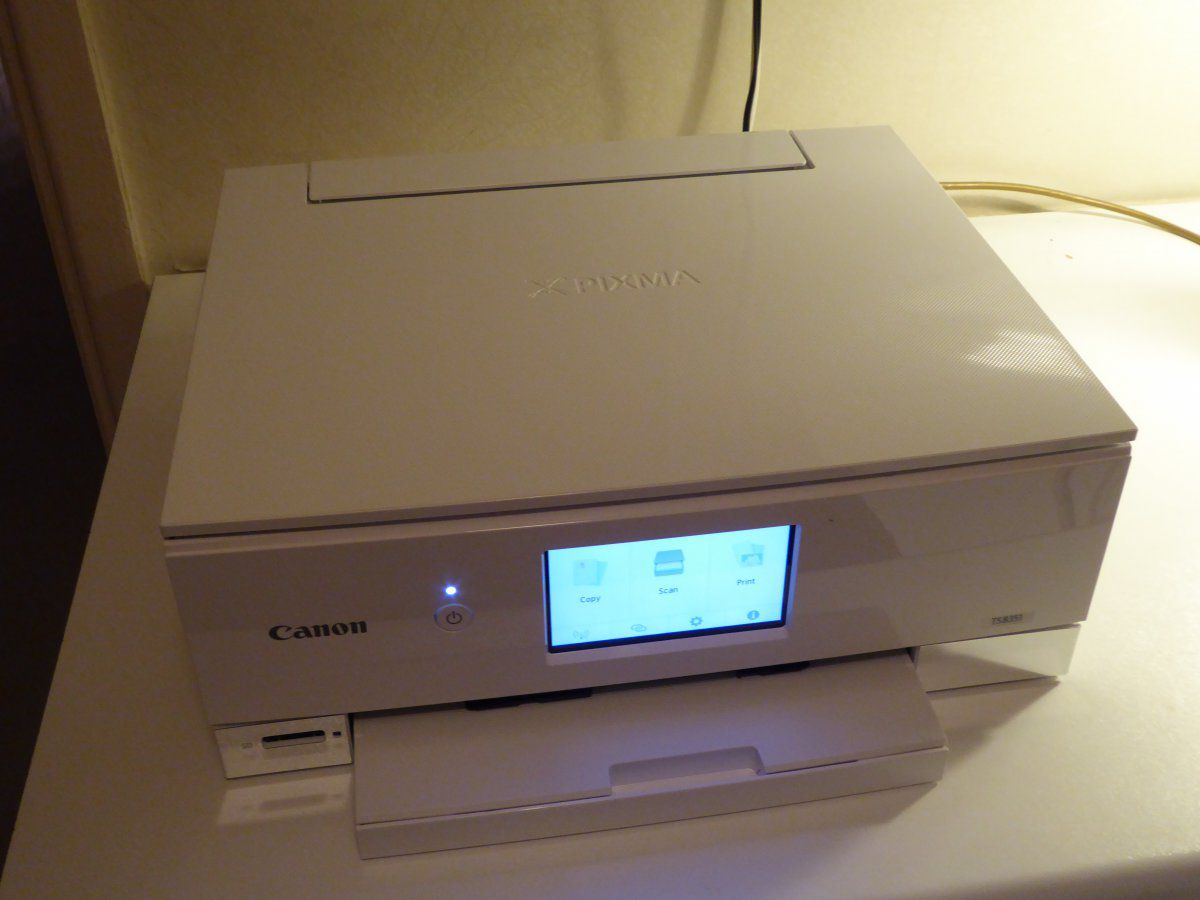 It's got wifi, but also a USB connection, which I prefer, (less to go wrong). It was a bit of a pain to set up and I had to download the photo printing editing suite app separately. But first impressions are that it's OK. It's much quicker than the Epson. That's gone in the plastic/metal/glass bin. (Our bin men take anything).
Last edited: Nov 25, 2019
Ad

And google just announce it was ending support for cloud printing. I have grown to rely on printing from my phone and other none pc devices. I wonder where that leaves the wifi connection.

DirtMechanic said:
And google just announce it was ending support for cloud printing. I have grown to rely on printing from my phone and other none pc devices. I wonder where that leaves the wifi connection.
Click to expand...

That's the IT industry, too ready to rip off the consumer. My Epson printer worked perfectly with Windows 8 and Excel, for about 8 years.
Microsoft could have made Windows10 compatible with older printers.
I tried to get a new printer that only worked with a USB connection, but couldn't, this will work with both Wifi and cable, so I'm using cable, less to go wrong that way.

IT is a good business to be in if you know what you are doing. (I don't)

My son-in-law owns an IT contracting and faciltating company. These days it's mostly organising moves for companies when they want to move from an old building to a new one. He puts in all the systems so that when they leave their desks in the old building on Friday night, they can start working from 9.00am in the new building.

But fifteen years ago he still did a lot of mainanance contracts. One he had was the major private health care company in the UK. Their head office is at the end of his road.
He was approached to take over the maintenance of their newish computer system as the people who installed it kept putting up their prices. On one visit he was asked if he could put in some additional terminals, possibly using some from the old system which was stored in the basement. So he went down and found some. He then asked the IT manager, (he said in many companies in those days, that job was given to any manager who wasn't too busy!). He asked him why they'd changed the old system to this new one which cost £7M.

"Oh because it would do this or that." (he did tell me what new programmes they wanted to run, but I've forgotten), he replied,
"Yes it would."
On some of the jobs he was called in to do, or more often he farmed it out to a few people who worked for him, when his invoice was paid, no mention of IT was made, it was charged under a completely different cost centre. lots of these so called IT managers had no idea how to do the job and a big bill for IT work could cause them problems. A similar situation was a company that bought and sold oil futures, he was often called out in the middle of the night at premium rates, when the system went down and the IT manager had no idea how to fix it. Unknown to him the guys who were buying and selling oil, in the slack times were downloading video games and other stuff off the internet, some of which had viruses. But he didn't ttell the IT guy that, he just fixedthe problem and waited for the next call.

My son-in-law now owns three houses and four cars. But he's always working.
Our eldest granddaughter who's 22 and naturally computer literate, sells data recovery systems to big companies, many of which are involved in online gambling, she earns a fortune.
Last edited: Nov 27, 2019

Here's another money-making IT situation.

My car is 14 years old has only done 56,000 miles and is serviced every year.
Yesterday I had to drive all the way over to Stockport as that's now the nearest Honda garage, two more local ones having closed down.
It was for a passenger airbag recall. It's the second time there's been a recall dor something I forget what the other was for as it was done at a service. A friend of mine has a BMW of the same age. He had exactly the same recalls, shows how common are the parts in different makes of car. The only things I've had to have replaced on this car is tyres, a battery and front brake pads last year. I'm not hard on brakes.
Anyway, on my way over there I noticed the engine management light had come on. This is an orange light on the dashboard in the shape of an engine. Now I knew it couldn't be anything serious. The management system controls a number of sensors, mostly to do with emmisions control ,so I suspected it was more an IT problem than a mechanical one.
As this was a free re-call, garages always do a "health check," to see if there's anything they can find to charge you for. All they could find was the spare tyre had only 1.8mms above the legal limit, new tyre recommendation at £105. "No thanks." And of course the engine management light. Recommendation, diagnostic check at £115. Now this just involves plugging in a computer, let it race though the system and identify an error code, five minutes? So that's jut the diagnostics, the next thing could have been a recommendation to replace the whole exhaust system, that'd be a few hundred quid. No thanks I'll let my local garage where I get my car serviced look at it next time it goes in.

The round trip to the Honda garage was about 20 miles, some of it on the motorway, (I don't hang about). It stayed on both ways but the car ran perfectly, no other warning lights came on.
Later yesterday I took my wife to the clinic for a blood test and this morning I went out for a loaf of bread. On both occasions the light came on when I turned the ignition key to the first position, but then went off as soon I started the car as it should do. So the computer had re-set itself.
At least £115 saved, could have been a lot more.
Last edited: Nov 27, 2019

have one here at home, its a brother. but at work I use it often as I can scan stuff to put in the cloud. have to save things in case staff takes the papers home and eats them.

It's one thing after another. The tumble dryer was making a groaning noise last night. It's one of those Hotpoints that had a recall, but ours was inspected and modified, three or four years ago, never been a problem, given that it is "on all day,"(it must be abour six years old). The filter is cleaned after each use. Just a case of wiping a damp finger across the mesh. My wife's MS prevents her from using a clothes line.

It's either the belt or the pulley wheel, as it starts protesting when it's been on for a couple of hours or so.
They aren't worth having repaired, as the cost would be at least half of that of a new one. So I ordered an Indesit on-line.
Ad

Our new tumble dryer arrived today. As with the old one it was an absolute pain to get in.

It has to sit on a concrete slab in the cupboard under the stairs. The slab is over what was the "coal hole" accessed from outside. This houses my electric golf trolley, golf shoes, a vacuum cleaner for the car and various other cleaning stuff. So it is worth keeping rather than knock it out to make the inside cupboard larger.

To get it in and the old one out, required the removal of the door, as the gap then is 60cms, 1cm wider than the depth of the machine.
Once through the door it would be impossible to lift into position, so before I installed the old one I made a box shaped shelf unit on castors, so I could lift up the dryer in the hall, put it on the unit and roll it in. Then as the top of the unit is the same height as the shelf, just slide it on or off the shelf. It's then a case of connecting the vent tube, which exits through some 4" pipe I fitted through a convenient air brick. The unit comes in handy in the garage as additional storage at other times. It only took a few minutes to gett it done. 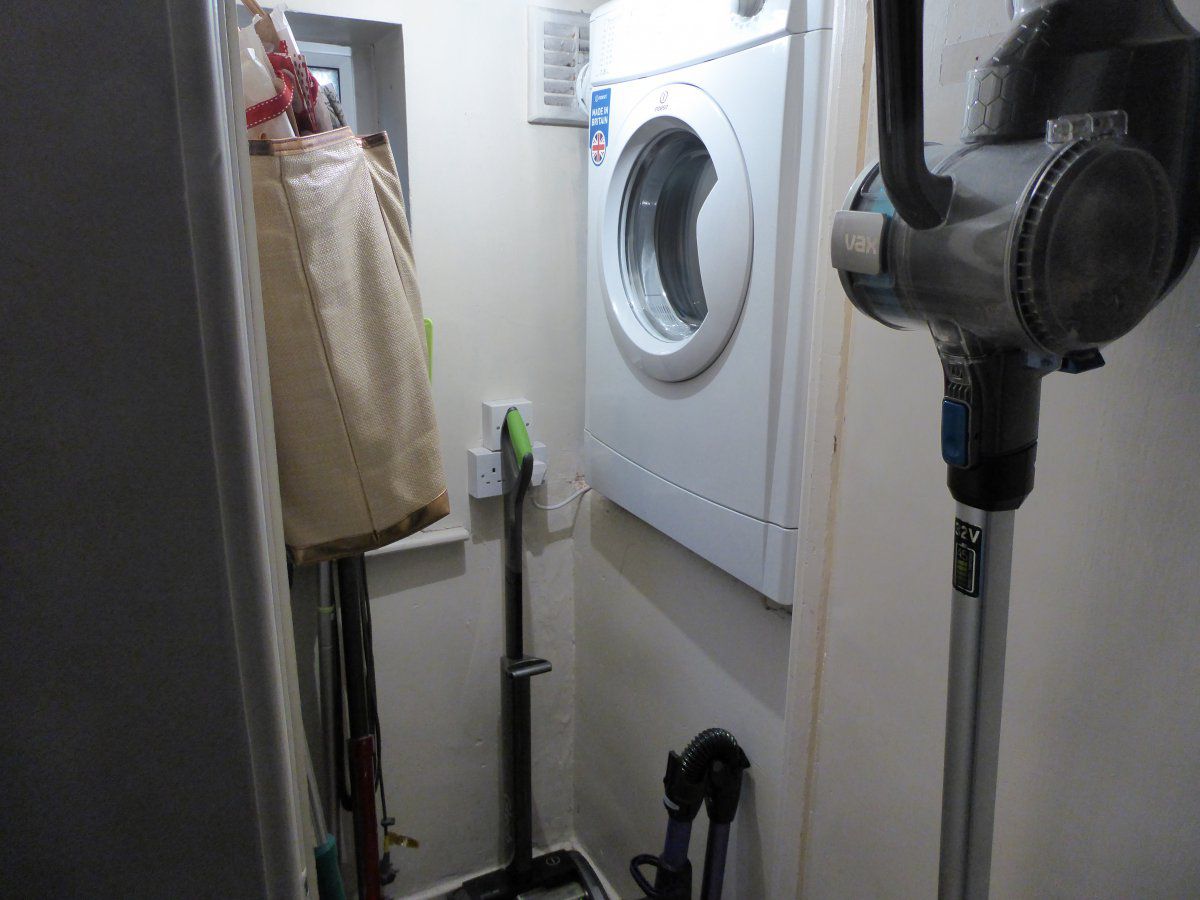 The cupboard, is also used to store some of my wife's many vacuum cleaners. There's two more and a carpet cleaner in the box room upstairs. It might seem excessive, but the cordless ones are new additions as with her MS she finds the more powerful mains varieties harder to use on some days. The bit of old laminate flooring is in one piece. This can be removed to reveal the trap door access to the floor space under the house. This trap door used to be in the corner of the kitchen which was a daft place to have one, so I moved it to here.

The houses in our road are built on concrete rafts with a couple of feet clearance underneath. This is handy when any cables, i.e. tv aerials, hifi speaker, phone, etc., needed to be connected between rooms on the ground floor. It's easy to get down and move around under there. I was also down there a few years ago fixing one or two squeeky floorboards. I had my wife identifying them by walking around above me. Saved pulling the carpets up. 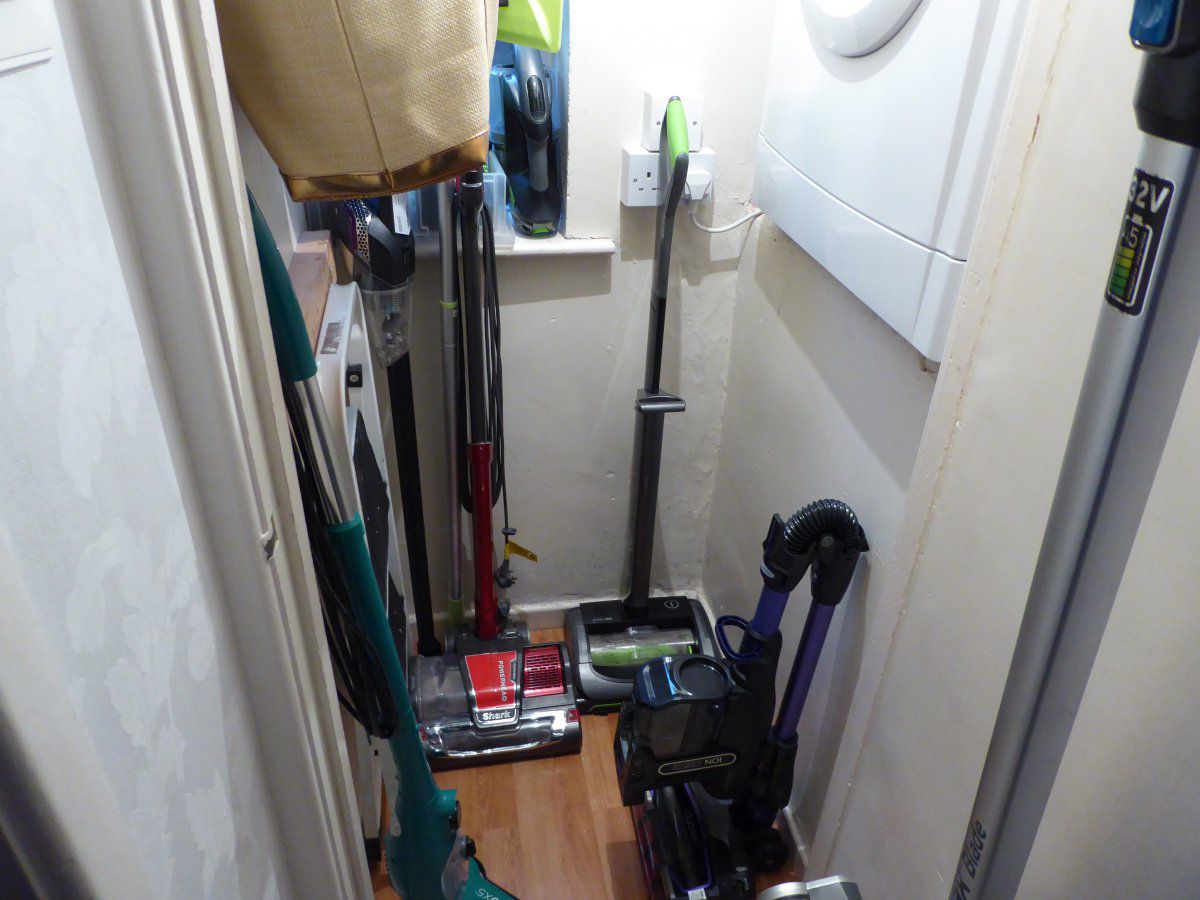