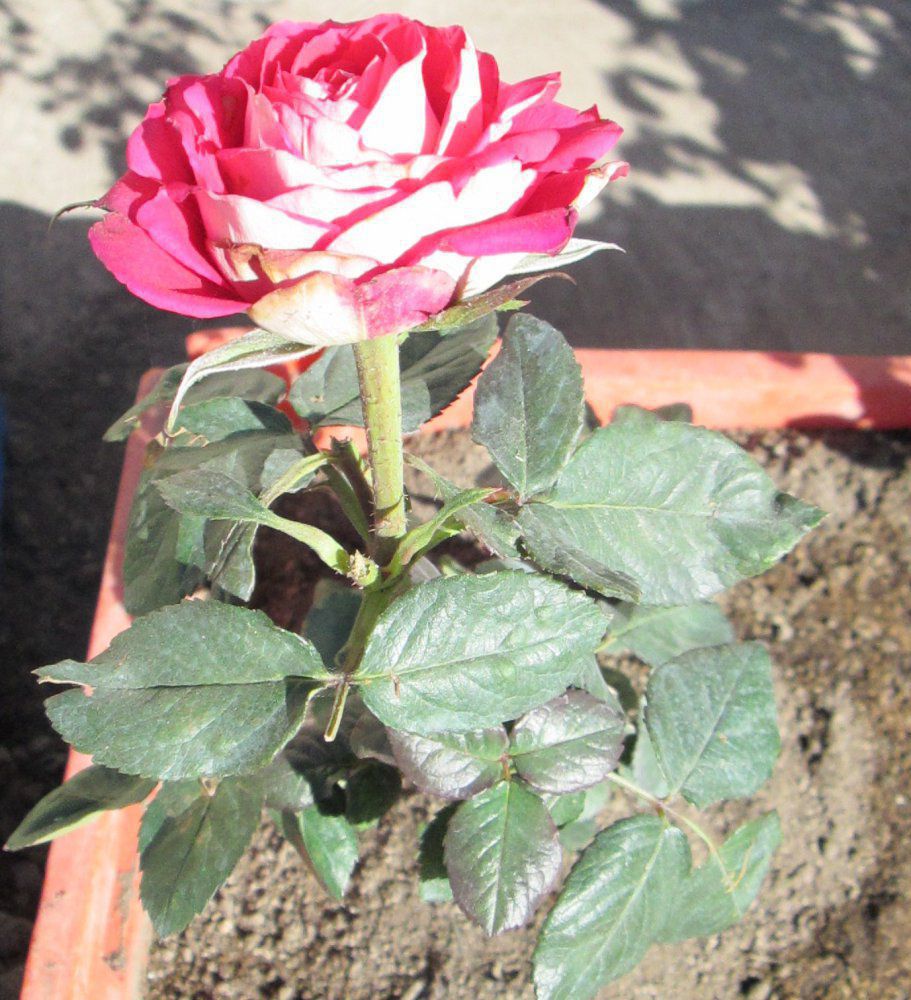 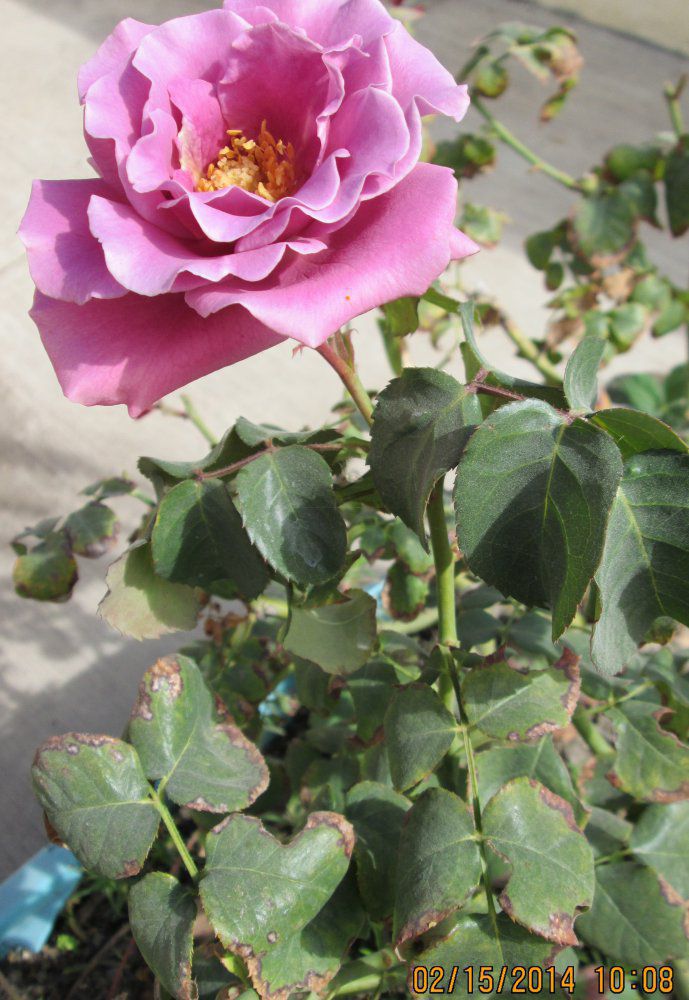 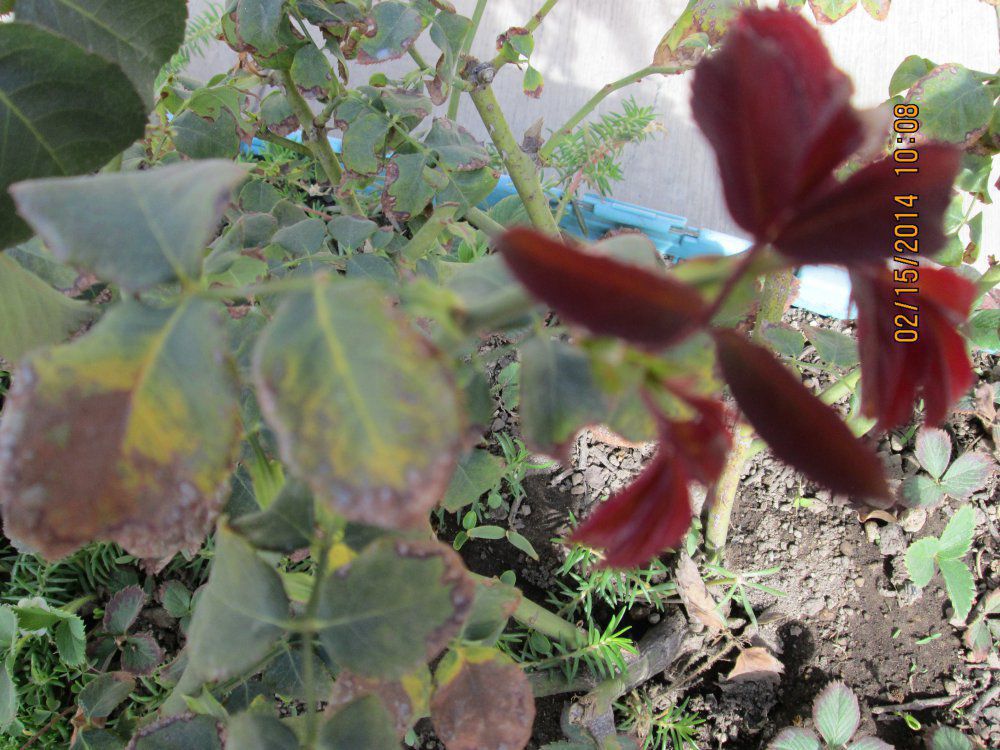 The browning on the leaves may be leaf scorch which is caused by hot temps and inadequate root system. They probably aren't getting enough water and the little that they get is not being held in the root system. Mulch around the base of the plant, give them a good quality rose specific fertilizer and water them more regularly.

Thank you firelily99 I will water more frequently. My wife suggest maybe every 3 days. We have a lot of dust in the air during this time of the year. Is it a bad idea to remove the dust from the leaves with water in the morning?

I see know reason to give them a light misting early in the morning although you don't have to do it everyday. My rose growing conditions are far different than what you have, I live in the northeastern US. When you do water them give them a long drink, it will get the water further down in the roots and encourage deeper root growth. I generally use a liquid fertilizer on them when they are blooming or just before they bloom. I also use a dry fertilizer throughout the summer - just follow the application suggestions on the package. Given the fact that you have hot weather year round you will have blooms year round. Try Googling care of roses in hot climates or rose growing in Mexico - you probably will get better info than I am able to provide.

Thank you firelily99 for you suggestion. I'm glad that I found this forum. It is more interactive than just reading an article online or youtube video. I will look up care for rose in hot climates. I've been trying to water my roses in the morning after I get up. Does it make a difference if you water in the morning versus the evening? I will start watering the roses every 3 days and see if this helps with the leaves. I wait till the water is coming out of the planters then stop watering. Maybe I will give my roses a light misting on the leaves 1 a week in the morning. I use organic compost and nothing taxic on all my plants. Do you know of organic fertilizer besides organic compost? As I get more compost I will add it to the roses. I will post some updated photos when the rose are healthier. Are we able to add plant photos to our profile here on the garden forum? If not I can add a httml for my google photos. Thank you firelily99 again for your advice. Have a wonderful day.

Roses like banana peels and tea leafs added to the soil. If you have gold fish you can take the water from the tank and water the roses. You need to get to the roots of the plants when you water, re-cycled bottles maybe able to help you, I have seen these advertised online.

Once the roots have been watered good you will not have to continue to water deeply each time you water. Roses like water.
Ad

Thank you Pat for the advice.

Am sure that I've already commented on the problems with your roses - elsewhere and although I very much agree with everything that has already been said - in that roses require fairly moist soil and being heavy feeders need plenty of potassium rich fertilizer from early spring onwards - if you are to have a prolific display of blooms - am not really 100% sure - that it is just more water that your roses require or that it is a disease that your roses are suffering from.

As apart from looking as though they could do with pruning - think because the patchy problems on the leaves doesn't appear to be universal on the plants - that the cause is possibly more to do with scorching - which as I grow roses in a hot climate where summer temperatures often exceed 40 -45 C or 104 - 115 F have found can be caused by the fluctuating temperatures of late winter and early spring - as well as by moisture sitting on the leaves as the sun comes up or even from being sprayed by a passing tomcat.

With regard as to the best time to water or spray your roses - the best time would be early morning before the sun is up - and is of particular importance when it comes to roses - as they are prone to so many different diseases but are especially prone to powdery mildew - which as watering in the evening - is known to make all plants more susceptible to these problems and very definitely powdery mildew - due to the fact that excess water remains on the foliage and around the plant overnight - giving bugs and disease the ideal damp conditions they need in which to thrive - it is always better to water in the morning rather than in the evening.

As for help with organic fertilizers - again I would agree with everything that has already been said - but would just like to add - that as I know many people who grow prize winning roses - who swear banana peels are the best rose fertilizer they've ever used - because they contain a high amount of potassium and of course are free - if you eat a lot of them So as you are interested in looking for organic ways to feed your roses and as this appears to be a very popular way of feeding roses amongst the organic rose growers - think that you will find that there is a lot of very helpful information on this subject - in the threads entitled " Save your banana peels for your plants " which you will find under the heading " Recycling and Composting " as well as " Bananas for your roses " which you will find under the " Rose " heading - both of which contain many organic ways of fertilizing not just roses - but many other plants too.

I have cleaned off the rose leaves & I will give them all a pruning. I need to get some good pruning shears for my roses. I will check at Ace Hardware here in Tepic. The Aloe Vera was on the East wall and South facing next to my roses. This area get the most Sun through out the morning hours and afternoon. 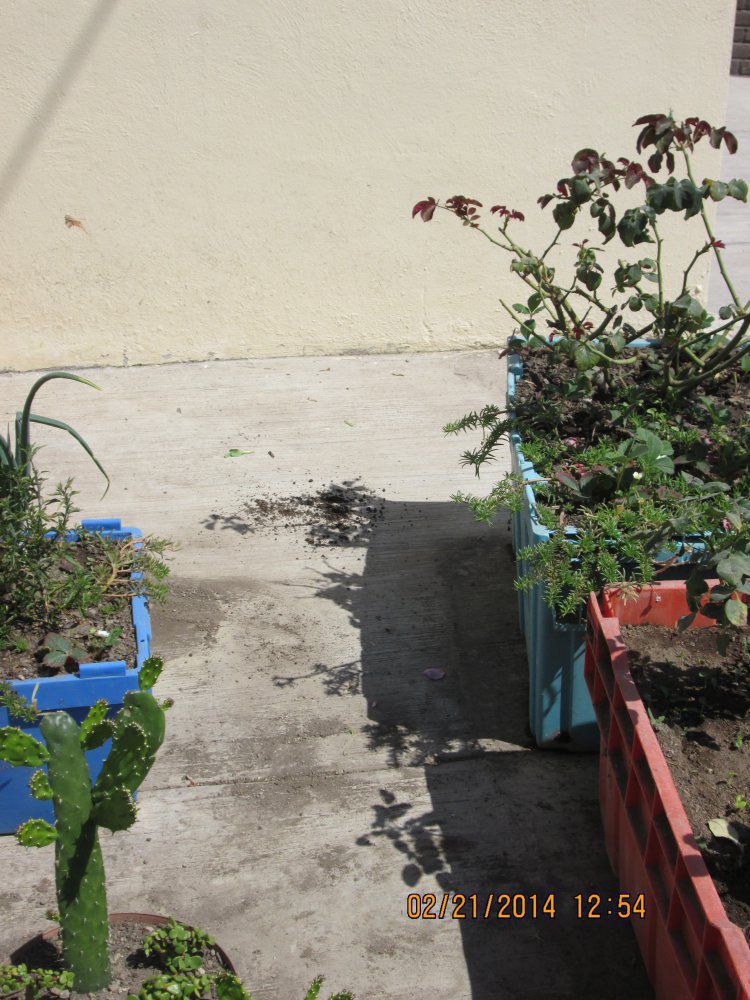 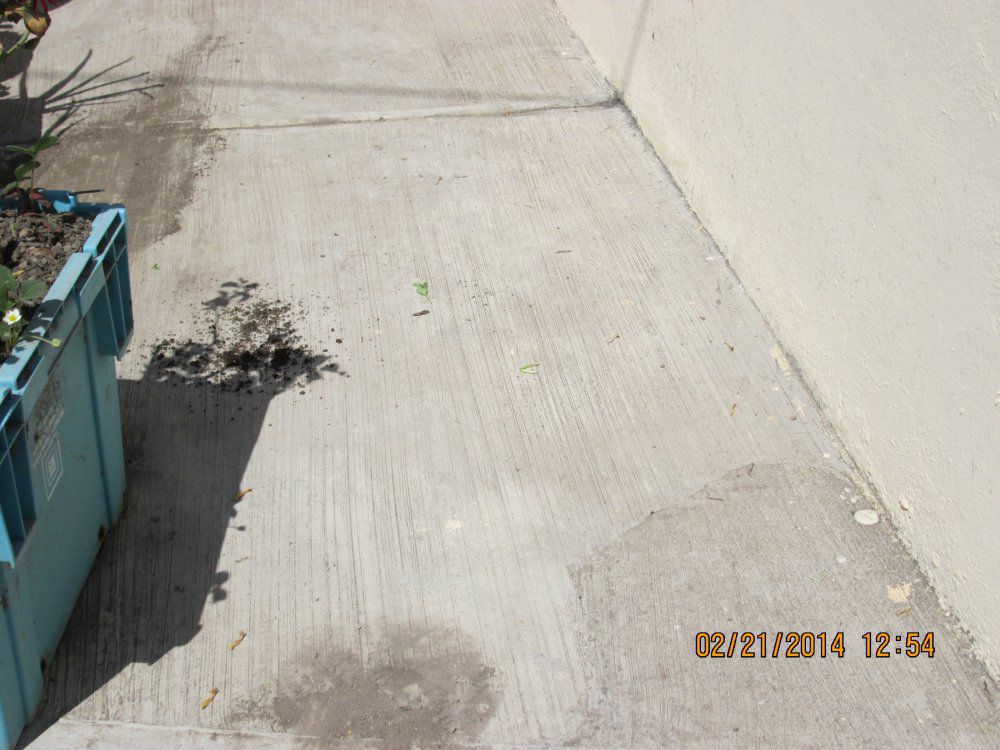 I've moved the Aloe Vera Plants closer to the West wall so it gets less sun in the afternoon. 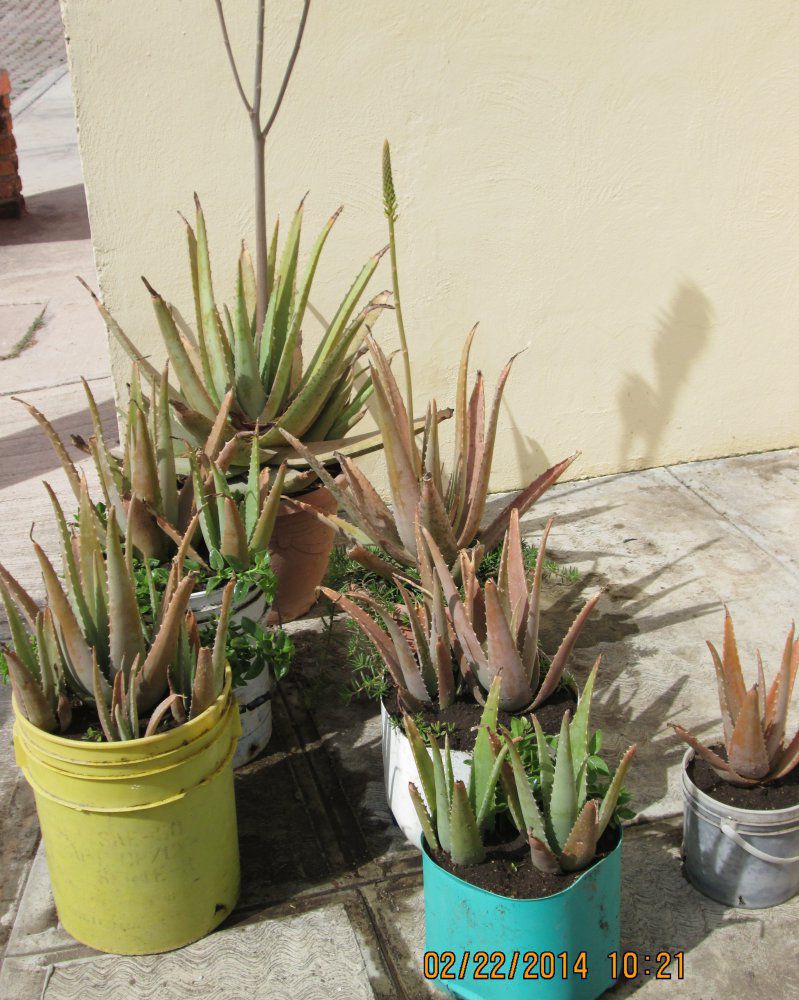 Thank you gata montes for all you insight on the plants.

Colombian14 - You are very welcome and would just add that I think - the fact that your Aloes were on an east facing wall was a contributing factor - as to why they were brown instead of green - especially as not many plants and especially succulents like being on an east facing site - so now that you have moved them to west facing site - think that they will now begin to thrive again and soon be back to their former glory.
I would just mention that this could also be part of the problem with your roses - as they too - are best when grown in a site that faces south, west or southwest

gata montes my rose plant container are heavy and difficult to move. I will wait till the soil is drier then I will move them.
How do I delete a post that I made a duplicate of?
Thank you.
Ad

I've moved my rose bushes and they are doing much better. I also gave them a pruning. fist 3 photos are from the same rose bush and the next 3 are from another rose bush. 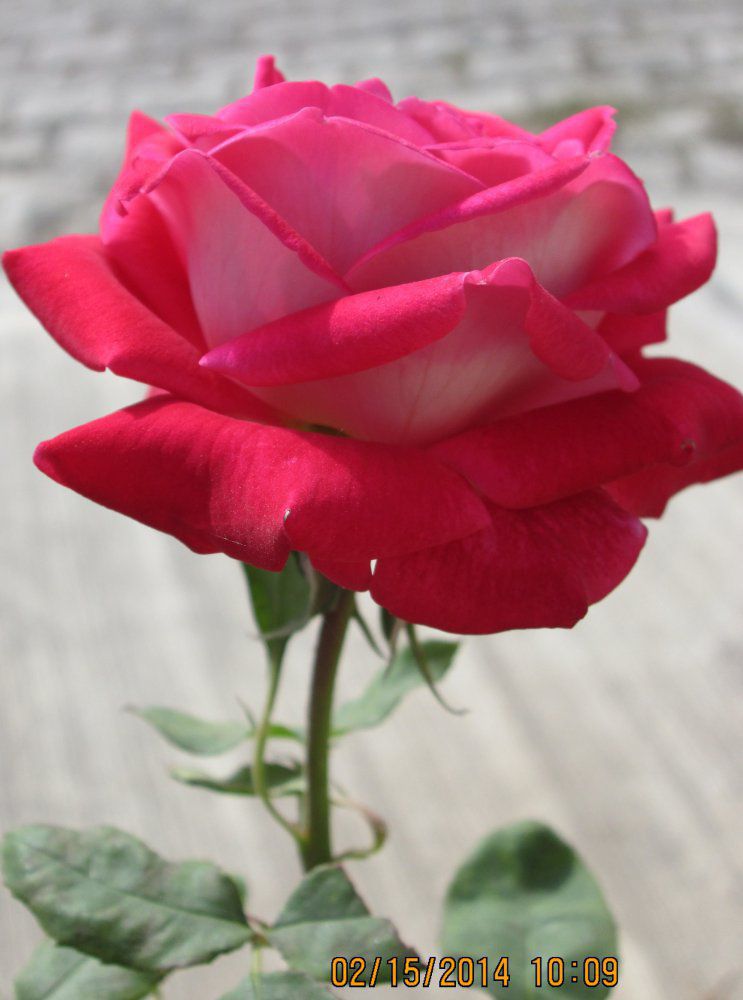 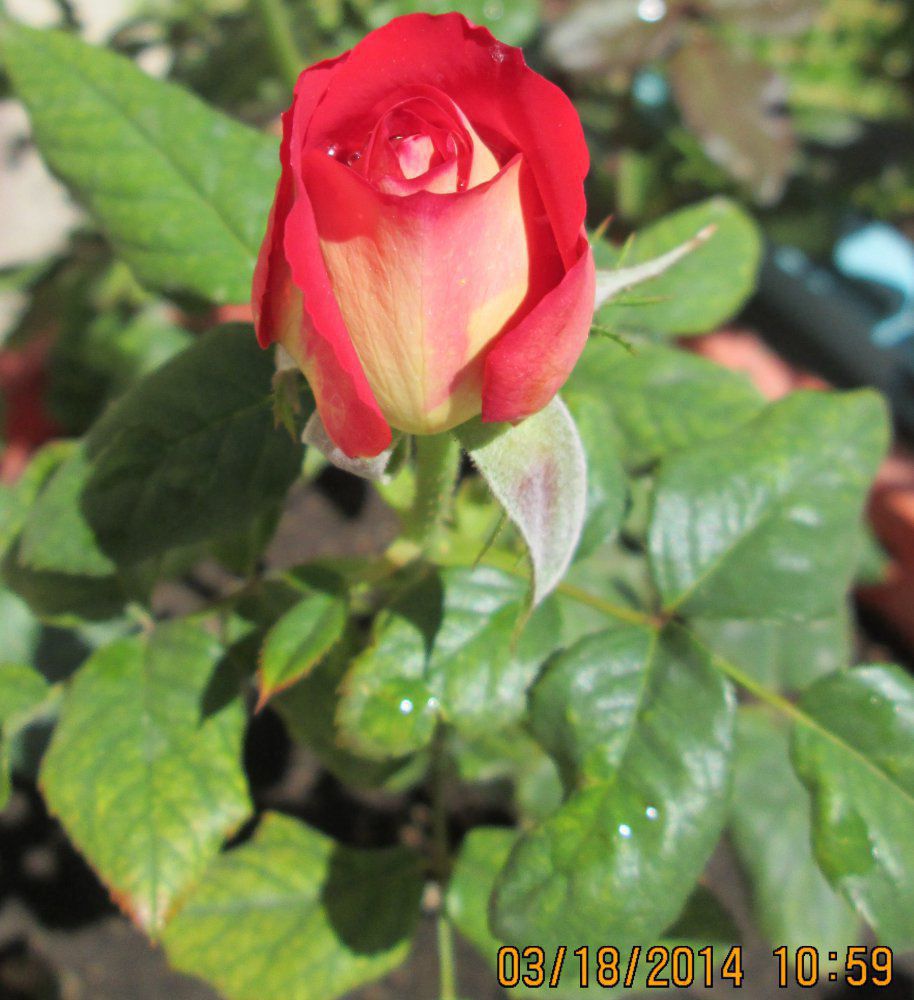 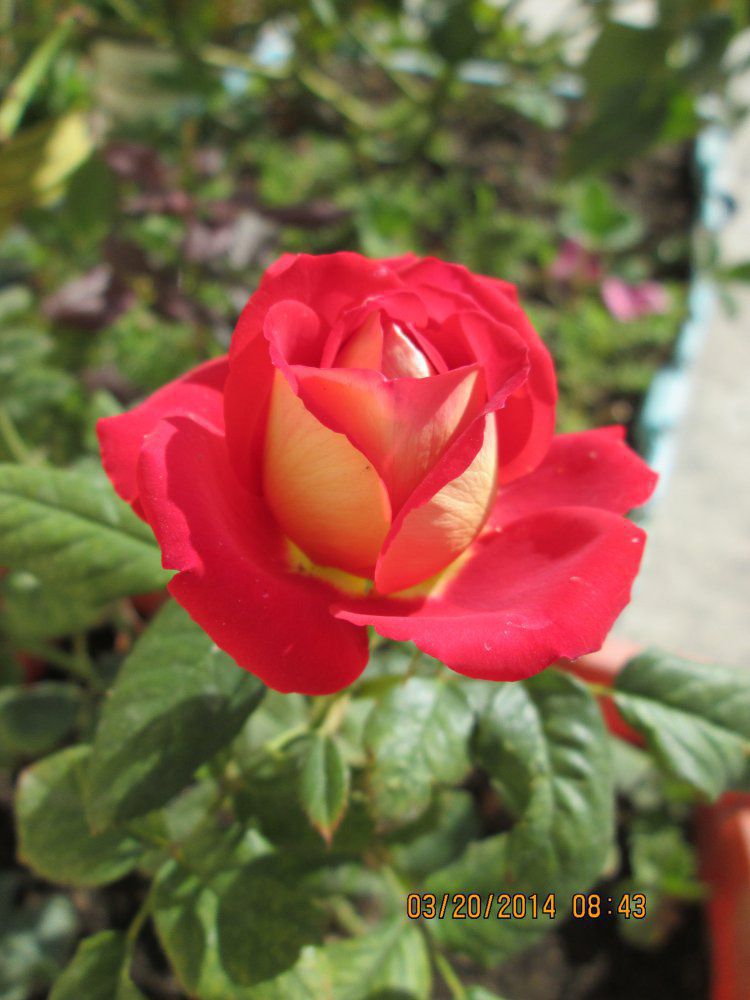 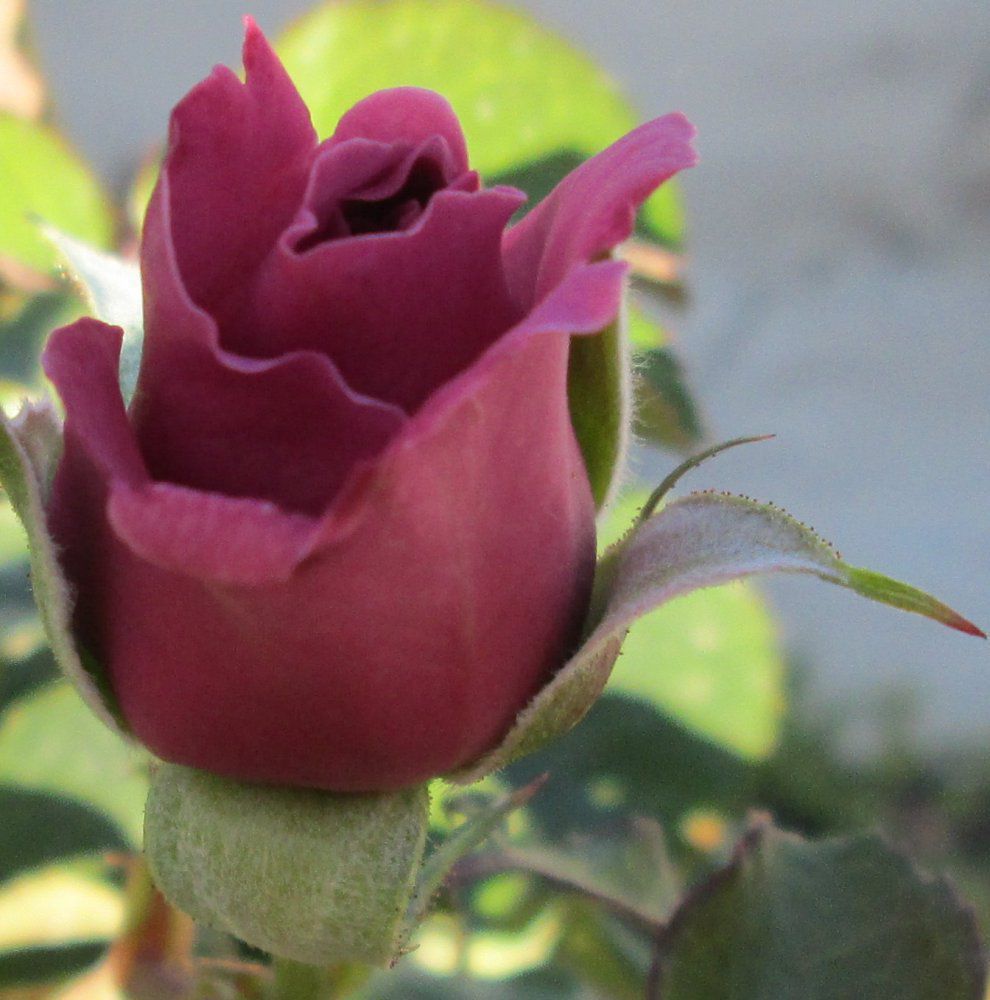 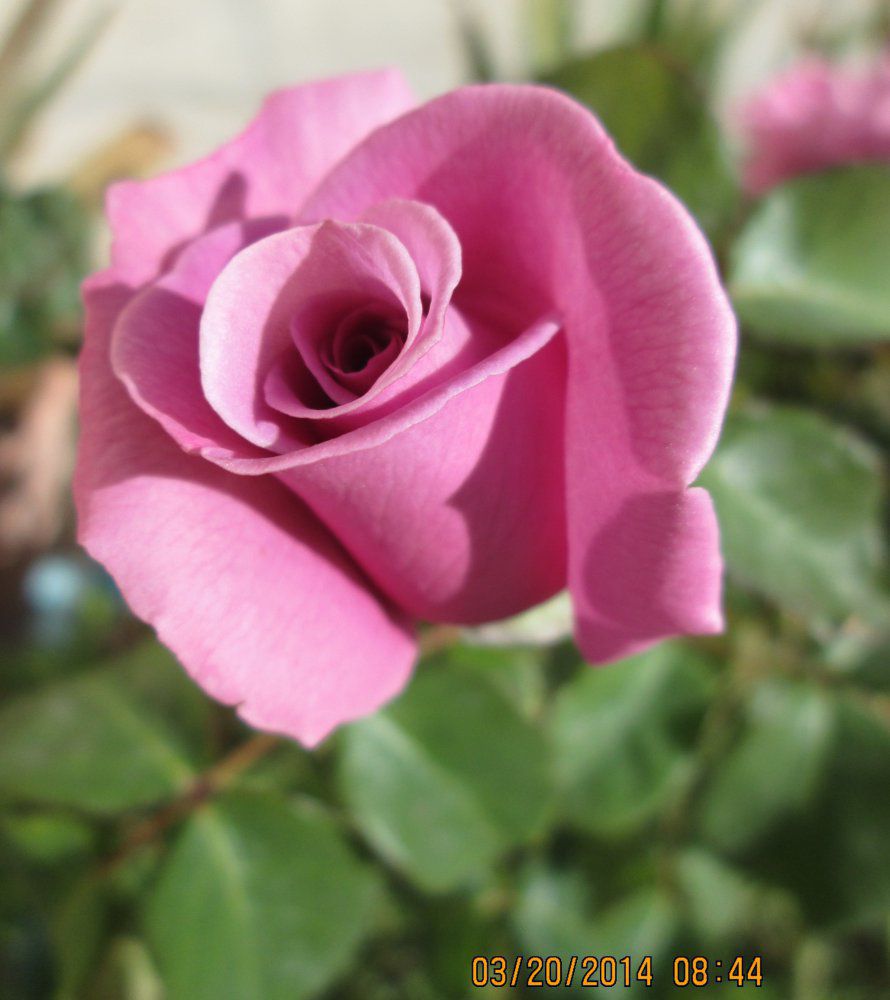 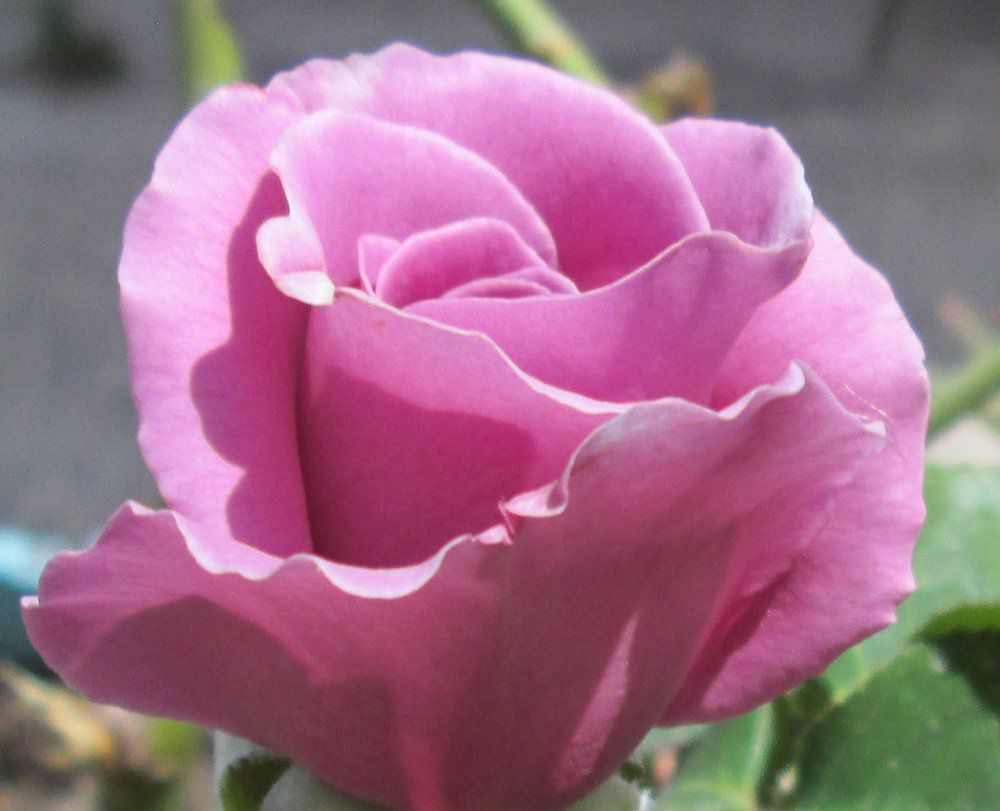 I will do an update post when I have more photos. Thank you gata montes

Am thrilled to see how good your roses are looking Colombian14, - especially as its quite a transformation from how they looked in the original photos and have to say that I think - they now look absolutely gorgeous and am sure that they are even more so in real life - particularly as they are looking very much healthier and the flowers are perfect in every way very definitely roses to be proud of and thank you so very much for sharing your updated photos - as its really lovely to see the transformation.

gata montes Thank you for your kind words of encouragement.
It is wonderful to have this forum to share ideas with other people who enjoy plants as much as I do. When I was living in the USA I had about 400 plants. Now I have only about 150 in less space. Some day I would love to have my own land to grow all my vegetables, fruits trees and verus plants. Over the years I have been gathering versus seeds vegetable and fruits. Maybe I will have my own garden business. gata montes I appreciate all your wisdom that you have been sharing.
Ad

My pleasure Colombian14 - and thank you for your kind words they are much appreciated and if I were you I would keep hoping - as you never know one day you may just have your own garden business - which if that is your dream I hope that it will come true for you
You must log in or register to reply here.