So my mum has her eyes on a brand new, proper Orchid glasshouse. We currently just have a bunch of shadecloth hung up behind the back porch where they are, and, well, we've had some interesting problems from that... The stupidest and funniest, while still sad, was a baby slipper orchid. Hung the poor tiny thing up, next thing, a gust of wind literally blew the entire seedling out of its pot, never to be seen again. Still hoping to see some slipper flowers poking out of the giant birds nest fern one day. The problem I'm thinking of is the heat. It's incredibly hot here in the Summer, and that alone has taken out some orchids. Have to be very careful when you even buy them because they can come cooked and rotting in the mail. She reckons the glasshouse will be fine because it has shutters for airflow, and that we can just put shadecloth over the top in Summer. She doesn't really go outside much, being nearly bedbound, so she doesn't seem to realise exactly how hot it gets. The weather will say 35C, and then it'll hit that in the shade alone. Will misters and fans be enough? Before I got a loan and got a car with air conditioning, I took a thermometor into the car once. Over 40C, and it was parked undercover before going, and stayed hot with the windows down. Australia, damn it's hot.
Ad

Hello @InsanityShard (what a brilliant name) My daughter and family are in Alexandra Hills, QLD and I have been to visit - it sure gets HOT.
You are so right, your mum does not need a glasshouse there - it would be better to build a shade house instead. I keep my orchids in the house and have them on a windowsill facing North (coolest with no sun) They don`t much like it when the heating goes on during very cold weather. 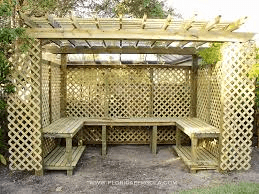 =o Do you have a link to where I can buy one?
Ad

No, unless I search for one, but it wouldn`t be very difficult to build one. I suggest you save the picture and find a decent chippy.
This structure is quite simple - it needs a few sturdy lengths of timber and a couple of bundles of battens for the trellis etc.
In my experience buying this kind of structure ready made is a waste of money. A custom built one might cost the same or even less if you can find the right carpenter, and will undoubtedly be much stronger (to combat wind that blows baby slipper orchids away.......the Migaloo) Whereabouts are you in the SE ?
Last edited: Jan 29, 2021