I'm so frustrated! I just got a pot of violas a few weeks ago and they were doing great at first, but now they're permanently drooping and on the verge of wilting. I've tried everything I can think of. I put them in a pot with excellent drainage and use mulch to keep their soil moist and temperature regulated. I keep them well watered and they get both plenty of sun and plenty of shade as the day passes.

Putting them in the ground isn't an option as I live in an apartment and have no dirt. My garden is all pots. Their tag says they like the sun but that seems to make them wilt even more. Then I put them in the shade and they wilt even more. I try not watering as much, they wilt, I try watering more, they wilt. What is going on??

The only thing I can think of is that I live in Southern California where it gets pretty warm pretty early, but so far our temps have held in the high 60's-low 70's. That's not enough to make violas wilt, is it? 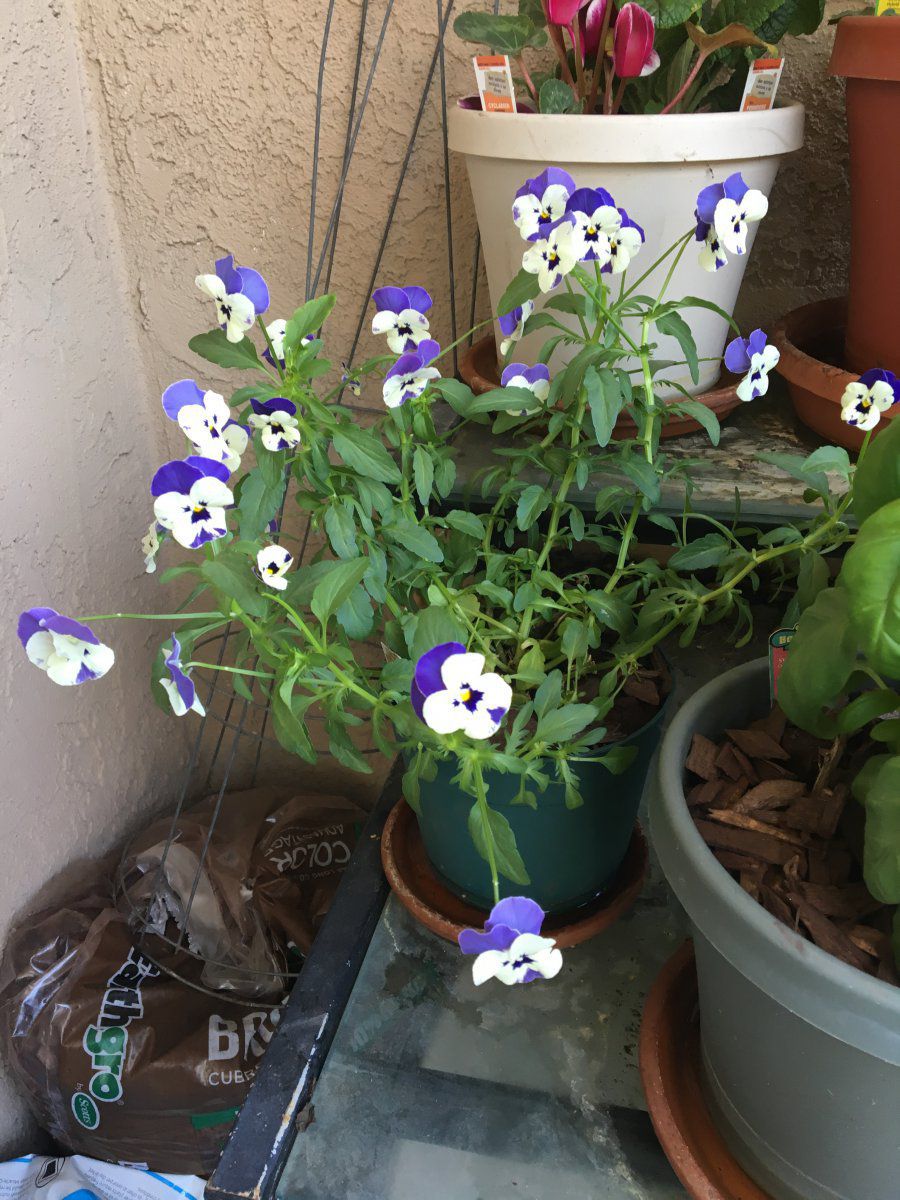 The flowers are very pretty

Is that them and wilted? They actually look decent to me. is it they are wilting or just starting to fall away due to what look to be pretty long stems? Is that one of many? Look a little tight. I have some Pansy's and Johnny Jump Ups that are doing fine and my zone temperatures are probably quite like yours.

I looked around the web and didn't see anything specific. 1 root rot reference which does not seem plausible as they look decent,. Some wilt thing... but I'm thinking and saw a few references to leggy, overcrowding and ventilation. That's why the question one or more I the pot and reference to long stems.

http://homeguides.sfgate.com/causes-pansies-droop-60142.html
Overcrowded plants suffer from poor air circulation, which increases the chances of fungal diseases that cause drooping. Planting too densely also causes the plants to become leggy as they stretch toward the sun, and leggy plants have weak stems that are more likely to droop. Space pansies 6 to 8 inches apart at planting to prevent overcrowding. If the plants do become leggy, cut them back by up to half their height to encourage bushier growth and stronger stems.

http://www.gardenguides.com/94631-save-wilted-pansies.html
Step 5
Rejuvenate overgrown or leggy pansies by trimming them back. Cut each plant back to one-half its previous height. Pansies will grow back quickly and begin blooming anew.

From the photo, I can see that there's a saucer type thing underneath the pot. That's something I wouldn't do myself; looks like the soil is sitting in water, something plants tend not to like. Water that sits around the roots can suffocate the plant, causing it to wilt and die. Aoart from that, the flowers look pretty good to me. I think they might be just reaching towards the light as you move them around, causing them to be leggy. You might want to try something that climbers like - a mesh teepee of some sort.
Went on http://homeguides.sfgate.com/keep-pansies-pot-drooping-95133.html and found this advice:
Check for dry soil. Insert your index finger into the top 1/2 inch of the potting soil. Water whenever pansies feel dry to maintain the consistently moist growing environment necessary to prevent drooping. Add water slowly, and let it seep into the soil. When the pot is completely watered, the excess will start seeping out of the drainage hole in the bottom. Remember to check daily during dry or warm weather.

Move potted pansies to a partly shaded area in spring to prolong their growing season. When they wilt from the heat, discard them and replant new pansies at the beginning of the next growing season.

Thanks for the replies, everyone. The biggest voiced concerns seem to be unanimously overcrowding and overwatering. However I'm going to have to disagree with both of those because of the fact that I already tried moving the violas elsewhere and watering them less. Didn't make a difference.

Also, something weird happened this morning. 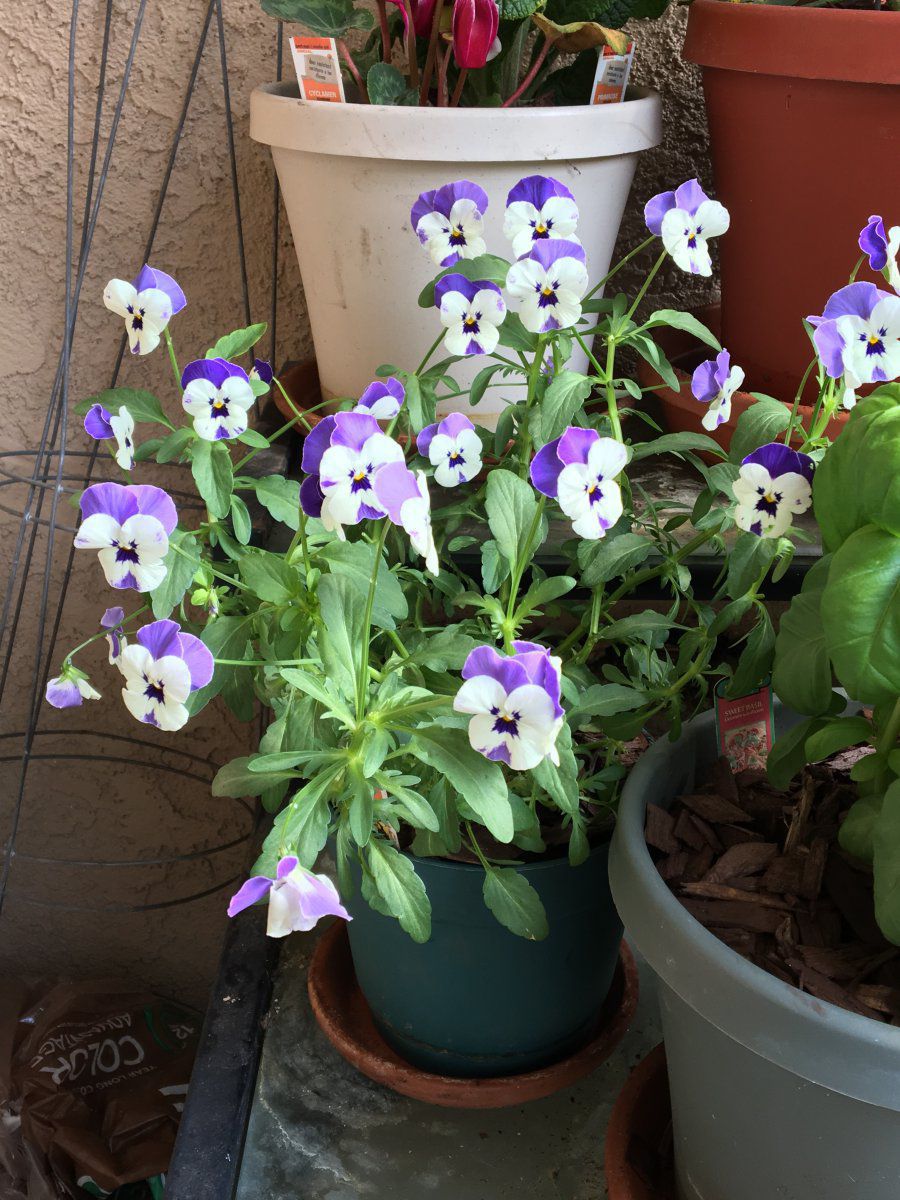 Then by 1 in the afternoon they looked like this: 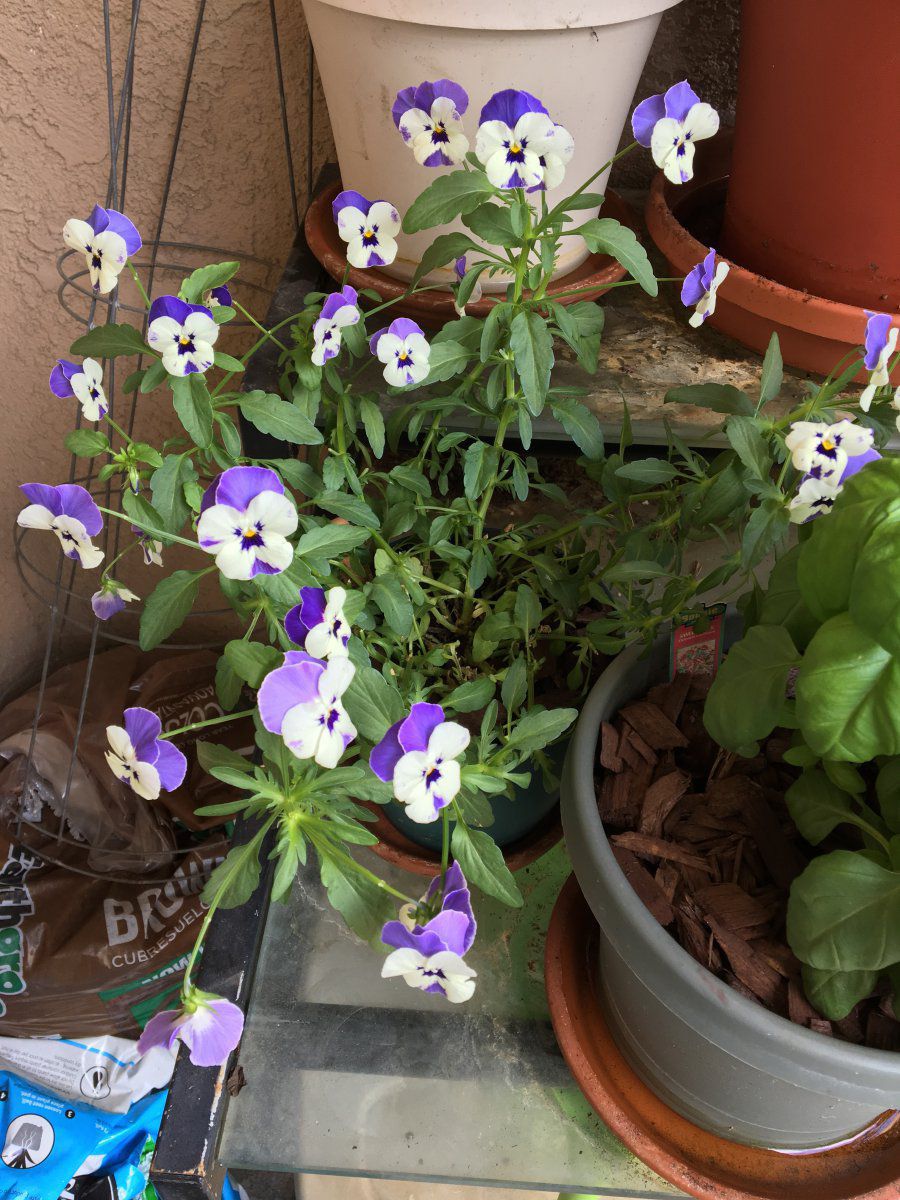 In that time I didn't water them or move them. In fact, I emptied the water from their saucer last night so it wouldn't be a factor. As for overcrowding, they're more than 8 inches away from their neighbor and they have a whole side of the table to themselves. Air circulation definitely isn't the problem. And like I said, I did try putting them somewhere else just in case that was the issue. It wasn't and that didn't help at all.

I'll be trimming them way back soon because yes, they did get a bit too leggy, but as you can see in the first picture above they can still stand up rather well on their own when they're not unhappy and drooping. There's definitely a difference.

@Fuzzygreenery I see that you live in the UK where it's way wetter than it is here and I can understand how being kept in saucers would be bad in your zone. However here it's so dry that if I don't keep my plants in saucers they dry out within hours and wilt. I've been doing it that way for years and it's my tried and true method for this extremely dry region.

I also already read all those linked articles back when I first got the violas because I wanted to learn as much about them as possible. That's why I'm so frustrated, I feel like I've already read every source on the internet I could find to no help.

I'm even more convinced now that it has something to do with the sun/heat because of the shifting light in my patio, especially between the hours of 9am and 1pm. Maybe the violas aren't getting *enough* sun?
You must log in or register to reply here.