I mentioned elsewhere that my vintage 1970s Leak 2000 tuner/amp had started "motorboating." This is a term to describe the sound it makes when you turn it on.
It becomes hardly noticeable when you turn up the volume as that sound doesn't increase. It's a common fault. So it's gone in for an estimate for repair.

I've had it for about fifteen years. I bought it for sixty quid on eBay. So it doesn't owe me any money. I'd be loath to get rid of it as I use the radio and can run my record turntable, cassette player and jukebox wallboxes through it (not at the same time!) it also has another input for a tape recorder if I had one. Many such tuner/amps don't have more than a couple of inputs. It also has "din" multi-pin sockets, essential for my cassette player and turntable,
which were one of the reasons I bought it as they are the same as a Philips tuner/amp which went U/S it replaced.
I'll get the estimate some time next week.


In the meantime I spotted this one on eBay. These usually sell for anything betweem £80 and £150.
I think people were a bit put off as there's a knob missing and scratches on the top.

The plus points for me, were that the vendor said it was working well and had been recently serviced. Now, he's got 100% feedback and what I've read were positive.
Another plus point is that there's no wear on the control lettering, which suggests not a lot of use. Even mine which is in othewise perfect cosmetic condition, the "on off" and "volume" lettering has worn.
I've got a spare knob and I can sort out the scratches on the top. It's proper wood veneer, the top is only held on with two screws, so I can take it off rub it down and repolish it.
A few of the push buttons look as if they've been replaced as they are slightly different. They do tend to fly off sometimes, but again, I've some spares of the right ones.

All being well I'll use it to replace the vintage Rotel in my "office" which I bought last year and that can become the spare.

I kinda miss the valves. I had a original Harmon Kardon amp when I was 13 that I wish I kept.

Valve amplifiers are hugely popular still with many enthusiasts.
Such equipment is still being manufactured, but it is at the top end of the price scale.
They like to see them exposed as they I guess, are considered "a thing of beauty." 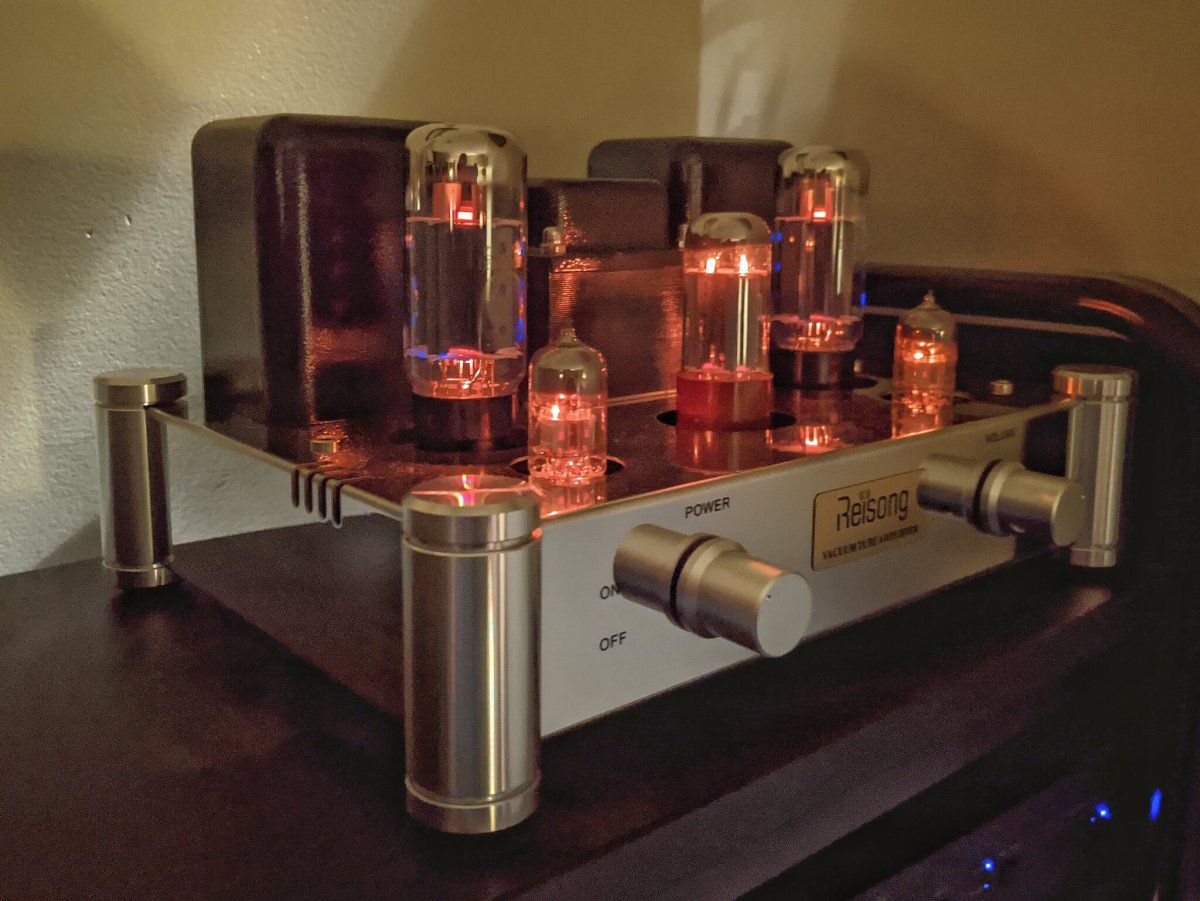 Sean Regan said:
Valve amplifiers are hugely popular still with many enthusiasts.
Such equipment is still being manufactured, but it is at the top end of the price scale.
They like to see them exposed as they I guess, are considered "a thing of beauty."

I think they are art. Especially since they were the original idea.
Ad

The tuner/amp I bought on eBay arrived this afternoon.

It was extremely well packed.

I plugged it in and checked out all the functions and it's working fine as was promised.

I took the front off and cleaned the tuning dial and the facia and replaced the missing mw/lw switch.

The vendor had included this photo of the damaged top in the description.
But it's a "proper veneered" top and sides, unlike many receivers of this age which have "wood effect" cabinets and are unrepairable.

So I spent just a few minutes on it with my belt sander and gave it a dose of liquid furniture polish. It will need more as it needs to soak in as it was very dry, but it's looking a lot better already.

I won't get the estimate for the repair of the original one until next week. But I will have it done, as the cabinet is in immaculate condition.

This one will replace the Rotel in my office which will become a spare.

There you go, up and running.