My largest project is nearing completion.

After moving into our new house on June first I decided to add a garage, build a deck and make wooden walkways in the backyard. I wanted the front of the house, facing the road, to be more formal. In the backyard I wanted it to be more rustic. No concrete! 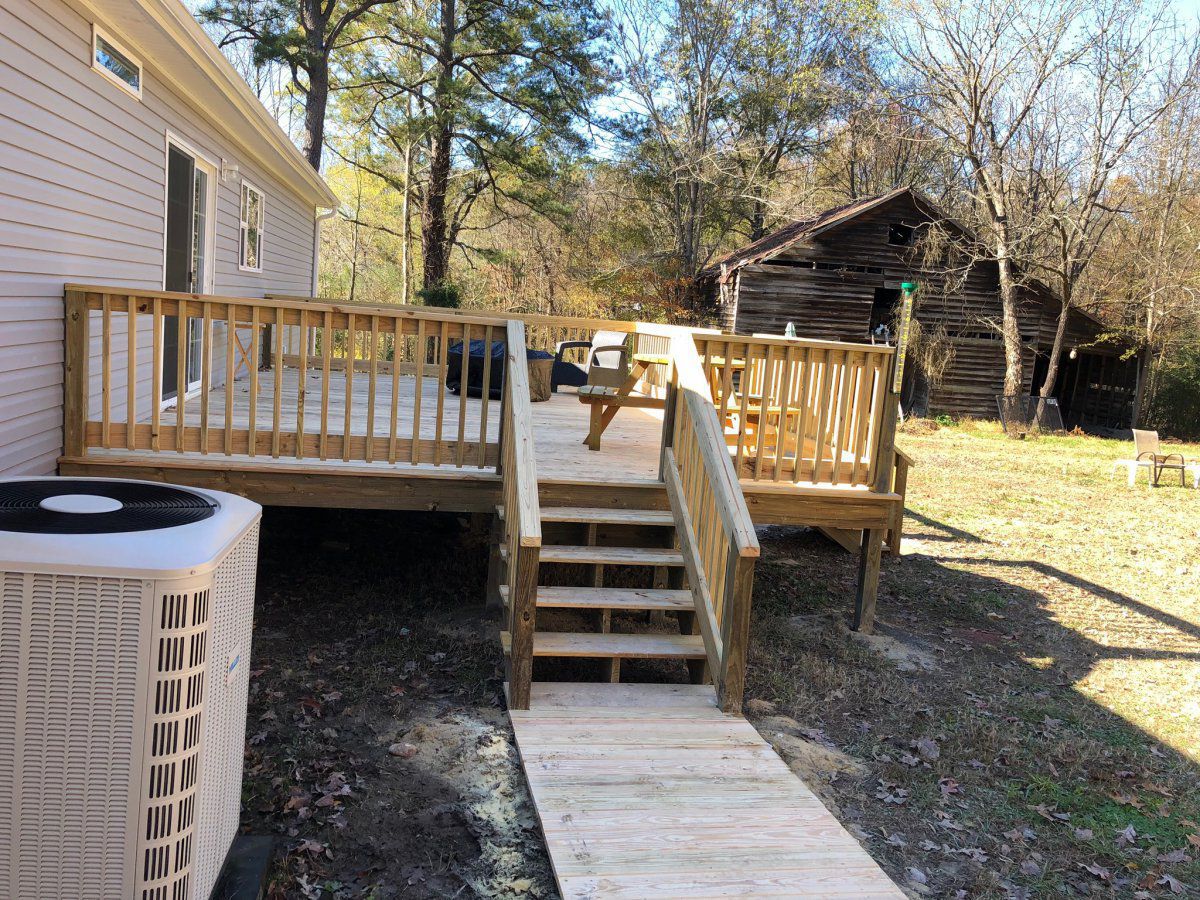 I started out by building a 16’ X 24’ elevated deck. I have furnished it with a fire pit and casual outdoor furniture. 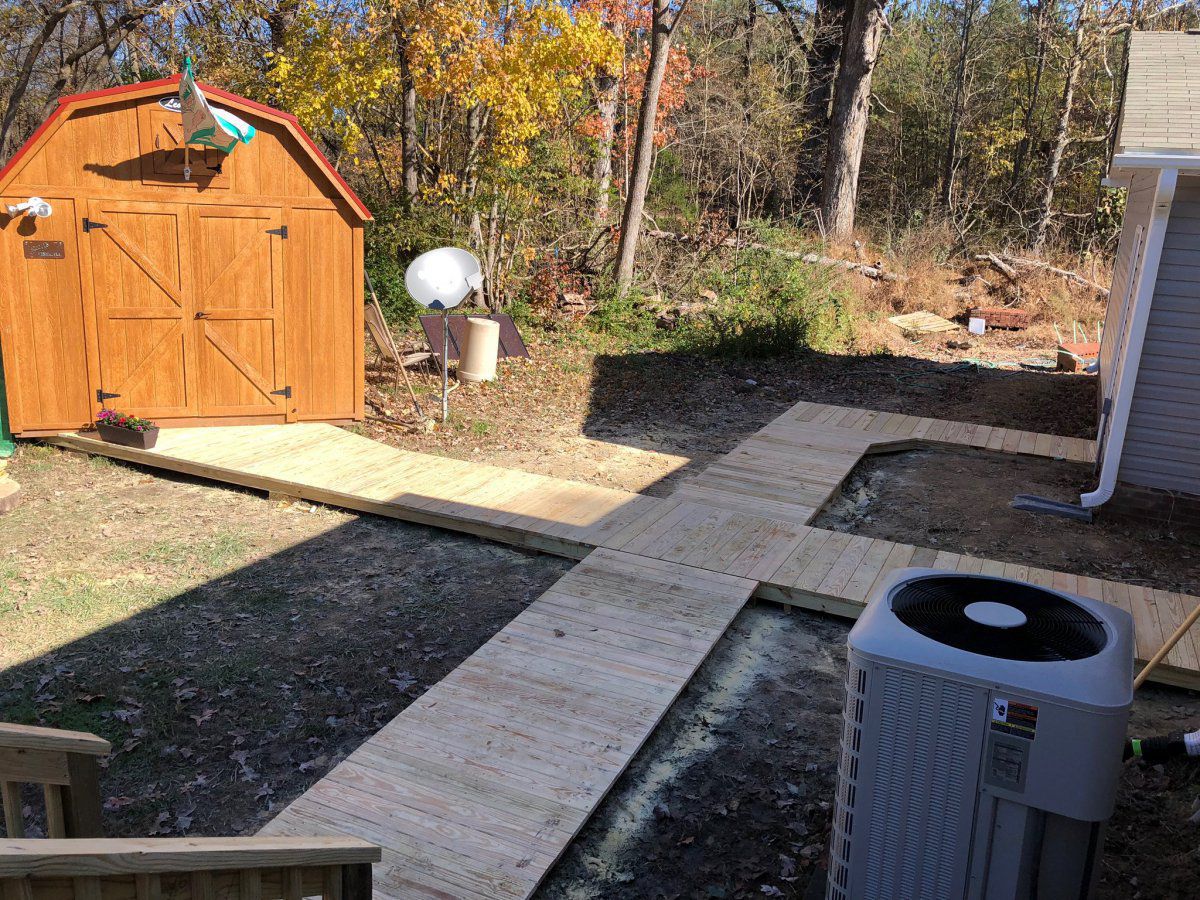 I then built an elevated walkway connecting the deck with the shed, garage and breezeway. Now comes the part I have really been looking forward to. I will be going out into the woods and digging up native plants to fill in the areas around the walkway. We have an abundance of ferns, grasses, shrubs and flowers growing here. Any empty areas will be filled with wildflowers next spring. The end is in sight!
Ad

Very nice! Well done! Something to cheer me up in this dreary December day!

It looks smashing and how you've designed the rest...please add photo's when you add plants..i'm rather took with grasses

Colin said:
Building a timber deck of that size here in the UK would need a second and third mortgage to cover the cost of the timber?
Click to expand...

Hi Colin, ours wasn't cheap mate and your right about how expensive it is...my hubby did ours the 2nd year we'd moved in and it's still going strong

Colin, it is pressure treated wood but I will still spray it every spring with wood preservative. I may stain it a little darker once it ages a bit but if it is too dark it will be hot on bare feet.

Your hubby has done a lovely job of the new deck Gail and your garden looks immaculate too; our rear garden we call our mini park it being full of mature trees and bushes etc but the wild life love it and it's a joy looking out of our kitchen window.

Pressure treated timber should last 25 years Silentrunning and longer if kept up to with preservative; I've lost faith in our presevatives (UK); apply them and watch them disappear; due to all the regulations and H&S rules modern preservatives are watered down unlike the old fashioned creosote which is now banned. I wouldn't worry too much about hot bare feet because the wooden splinters will grab your interest more?

Has the quality of your preservative suffered too in America Silentrunning due to endless regulations?

Colin said:
Has the quality of your preservative suffered too in America Silentrunning due to endless regulations?

Absolutely. In fact I don’t think it is pressure treated anymore. I think they just soak the wood in a solution containing petroleum and paraffin now. They have removed the arsenic and formaldehyde that used to make the wood indestructible. In Florida I was lucky to get 10 years out of landscape timbers.

Thanks Silentrunning. It's a good job they use Petroleum and paraffin and not diesel because otherwise here in the UK we wouldn't have timber preservative because our government are attacking anyone using diesel especially diesel car owners.

How times have changed though over the last 50 years; as a child every home used DDT and Creosote; parents knew of the dangers so washed spills from skin and clothes and washed their hands after use; the children were taught to respect such chemicals so grew up with them unharmed; now everything is covered in safety stickers and if it carries on the way it is doing there won't be enough space to attach all the safety stickers on items we buy so what next; start issuing books to explain if we drop something heavy on our fingers or feet it's going to hurt?

I started work aged 15 in a deep coal mine as an apprentice mechanical engineer where I was exposed to moving machinery that could and would tear me to bits given chance but right from the start I was taught safe working practices and if I was caught doing something unsafe I sure knew about it; here's a video showing the machinery drives I was exposed to; not in a saw mill but in coal mining; similar machine drives though with line shafts; fast & loose pulleys; huge flat drive belts and many big exposed gears; the H&S lot would close such a place down in a blink these days but why? Accidents were generally genuine accidents not down to operator failure but a machine breakdown of some kind;


During my time in the mine I only witnessed two accidents; we were using the cage to lower a big heavy roll of conveyor belt down the shaft when a guy trapped his foot but he was wearing madatory safety shoes; the second was a roof cave in where a guy became injured and we had to repair the damaged conveyor it was very unfortunate indeed for the cave in to happen just at that point.

Mistakes these days though are a very lucrative earner for the government; long gone are the days of a good telling off from a police officer (I almost said policeman but even this could be regarded now as discrimination against women) no long drawn out court case just a good ticking off; now it's either an instant fine or if more money can be made it's a court case; I'm very old fashioned and find just getting out of bed these days I'm likely to be breaking some law or other. It's a good job Ian isn't keen or I'd get my legs slapped for wandering light years off topic?

I'm not complaining about many of the changes because our lifespan is greatly increased to the point the government are now calling us pensioners as "A burden upon society" perhaps the likes of DDT and Creosote should not have been banned because we now live to receive a state pension?

Back when I was much younger I discovered the book “Silent Spring”. I instantly became an environmental radical. As I became more involved I noticed a disturbing fact - the government entities seemed to be making a good bit of money for doing nothing. Huge fines didn’t go to clean up the mess, they disappeared into government bureaucracies. Money would be allocated for a cleanup and only part of it would actually be spent. This kept repeating over and over. I soon became skeptical of all environmental endeavors. I about blew a fuse with the carbon tax idea. All that is is a method to make money change hands while solving nothing.

Back to the plot though are you doing more to your new decking/railing or are you now waiting for next year; what's your weather like because it's perishingly cold here and sleet keeps being forecast? 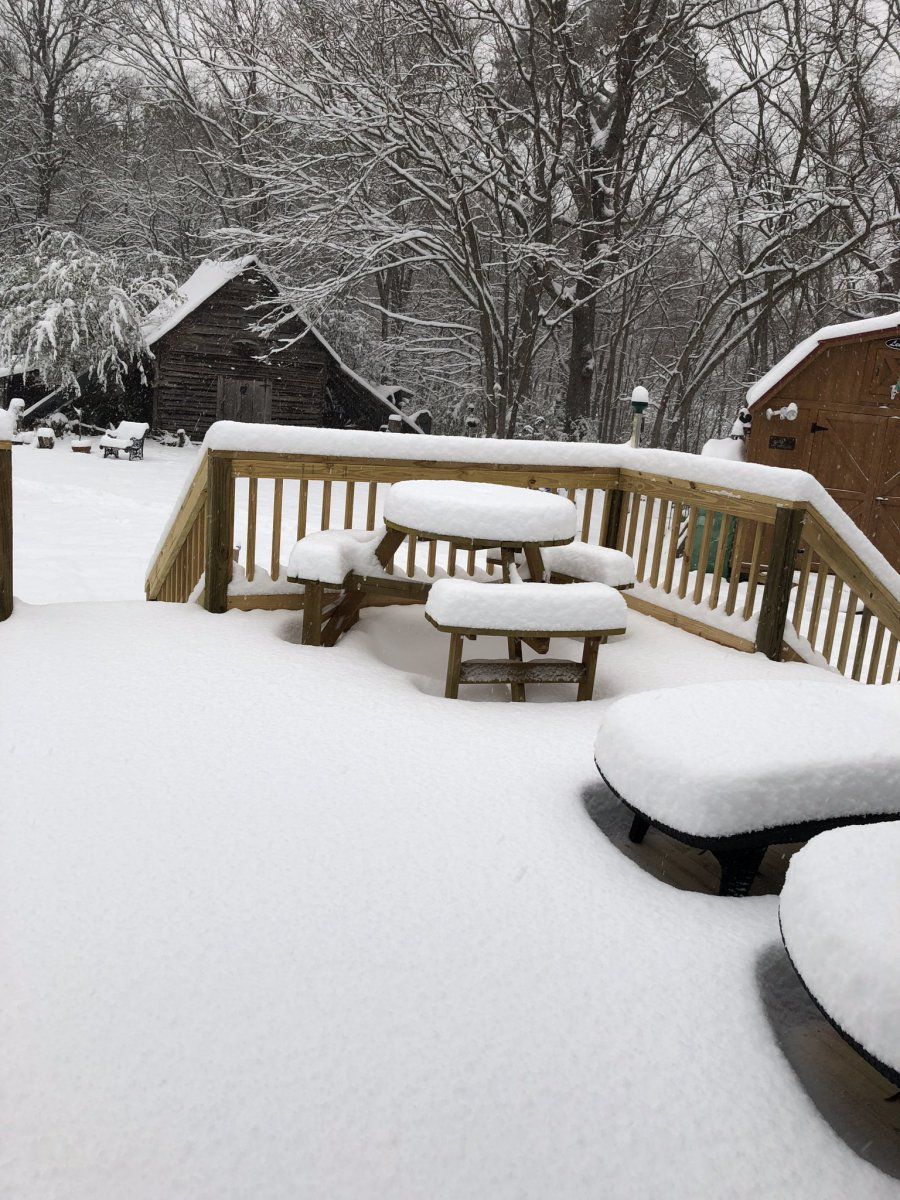 If and when the weather ever dries out I will give the entire deck and hand rails a good sanding to prevent any splinters. I will then decide on the stain. Being that it is treated wood it is far too moist to stain now.
Ad

It looks like a winter wonderland Doug but BRRRRR.