My birthday chain saw from Minnesota.

Several years ago I had added to a post (another forum I belong to.) about old chain saws I had used and liked.
For me it was a model 25 Polan badged as a Allis Chalmbers my brother bought.
A fellow I worked with asked me to take his Sears badged one and see if i could get it running right and sharpen the chain.
I cleaned the carb on it and used it for a week cutting fire wood before takeing it back to him asked about him selling it to me. He declined as it had belonged to a relative of his wife she thought highly of.

In the end I posted I would like one and was watching for one.
Comes about 4 maybe even 5 years later I get a message from a guy in Minnesota who said he had two of them a Sears branded one and a true Polan branded one and I could have one for the cost of shipping.
Sent pictures and I chose the true Polan one. 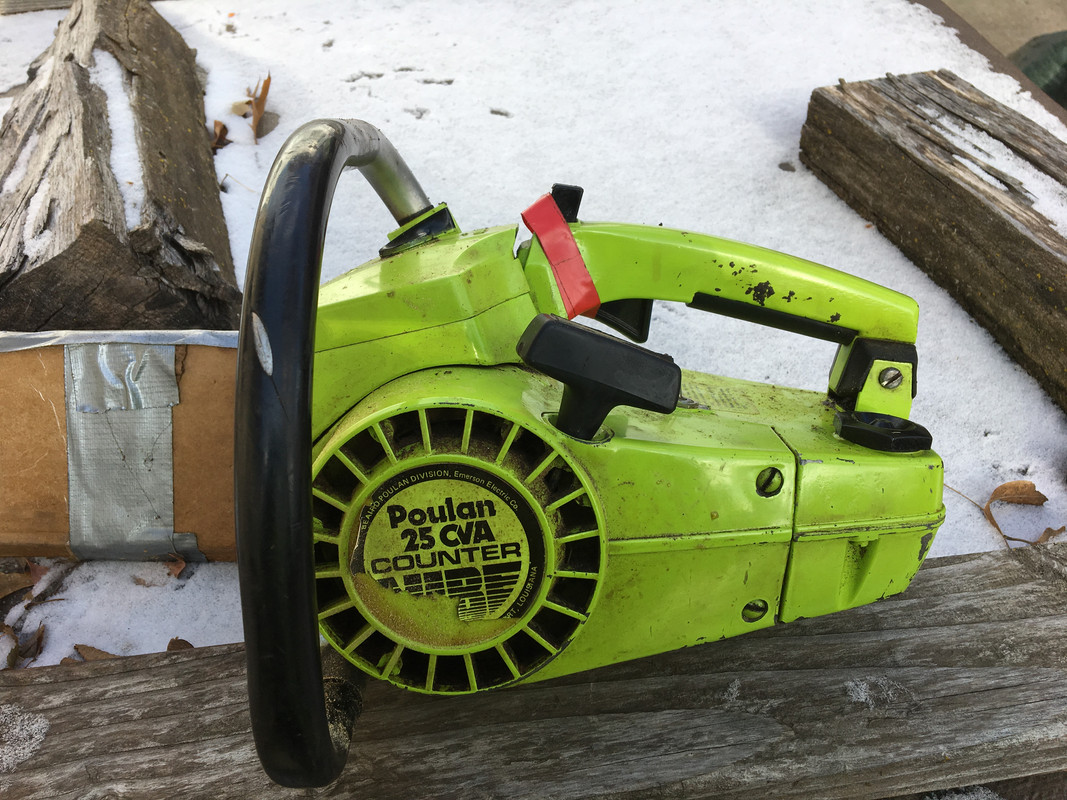 He boxed it up sent it USPS cost 23.00. It arrived Saturday evening as our mail rarely arrives before 5:00 PM any longer.
Didn't have time to do much more than unpack it Saturday evening. Checked it over put a bit of premix VP fuel fix in a can in the tank and dribbled a bit in the carb and it started in two pulls, sat and idled for about 5 minutes before I shut it down.

It didn't come with a bar and chain, have no idea what is calls for other than 3/8 LP chain.
After I got home last evening I removed the bar and chain from my Polan 2150 to see it that will work.

Sunday evening I took a few minutes to remove the bar and chain off my Polan 2150 to see if it would work on the model 25.
I didn't measure the bar, I believe 16 inchs.

Monday morning after doing my morning chores I filled the tank the rest of the way with VP fuel fix in a can 40:1., filled the oil tank with oil added a bit of Marvel Mystery oil to the summer mix.

Fired it up and let idle as I walked to a green wild cherry tree I had skidded from the woods. checked to see if the chain was throwing oil and it was doing a good job of it with out the manual oiler but I checked that to.

Cut that Cherry up into fire wood rounds and was nearly finished when it ran out of fuel. Finished the job with my Echo cs 400.
Once finished I took the Polan up to the barn work shop and removed the carb air cleaner cover so I could reset the idle as it kept stalling rather than idle. I also wanted to pull the plug and get a readding off it once it cooled down.

I got tangled up doing other things the rest of the day so didn't get back to it.
tomorrow christmas eve is a family tangle so most likely not be able to get to it then either.

It is as sweet running and cutting as I remembered my brothers.
I am really happy the fellow in Minnesota had read about me wanting one of them. also offered me one in his efforts to down size.