As i've sent some seeds out to a few of you, I thought i'd do a sticky thread, telling the story of the variety and somewhere we can post progress reports/pics during the season

The Manx Marvel was bred on the Isle of Man to withstand the sometimes harsh conditions of a island in the middle of the Irish Sea.

It had seemingly disapeared from the island, but back in 2007 Dr Russell Sharp managed to obtain 4 seeds from a seed bank in America.

On the uk forum we managed to get hold of some seed from a Canadian member, we then divided it between 7 members, just 5 seed each.

We decided to grow it at different locations to lower the risk of loosing it all to blight or some other disease.

After a couple of years we now have a few thousand viable seeds between us, i've been distributing mine and growing on more plants.

Also had a meeting with a commercial tomato and chilli nursery, they are trialing the plants with a view to marketing them, seemed daft to go to all this trouble and not do something with it.

The plant's were grown in isolation, although cross polination is unlikely, we weren't taking any chances.

It's a well built stocky plant, we found it was best grown outside, didn't do too well in a greenhouse.

I was the last of our secret squirrel gang to start them off, sowing on 24th April. I had three seeds and only two germinated. These two grew very quickly, and I kept them in the greenhouse all the time. I started picking ripe fruit off them on 31st August (they actually beat some of my other varieties to ripen even though those had been sown 6 weeks earlier!)

We were not really sure of its growth habit, so the two main plants in my greenhouse I treated one as a cordon the other as a bush. Although they grew quickly the greenhouse plants never looked that happy compared with my other varieties. So maybe they don't like the indoor heat. They still produced respectable yields. The Cordon plant was the best, it had a few more fruit and on average they were bigger by some 25%. So between us we are certain that Manx Marvel should be treated as a Cordon.

The cordon plant's sideshoots I grew on and planted seven of them outdoors on 26th July. These outdoor plants grew even faster and bigger than the inside ones. They were much better in terms of yield and plant size compared to my other outdoor varieties (Ferline and Rosada which I'd started off much earlier).

Sadly my outdoor Manx Marvel's were wiped out by Blight in September. That was a shame as they were heavily laden with fruit at that point and none had ripened. I still managed to salvage 5.5kg of green fruit off them before I had to destroy the plants to stop Blight spreading. Given a bit of space and an earlier start then I reckon Manx Marvel will be a very heavy cropper outdoors.
Click to expand...

So they we go, lets plant and compare
Ad

These are some of mine so far this year, got about 30 more on the go. 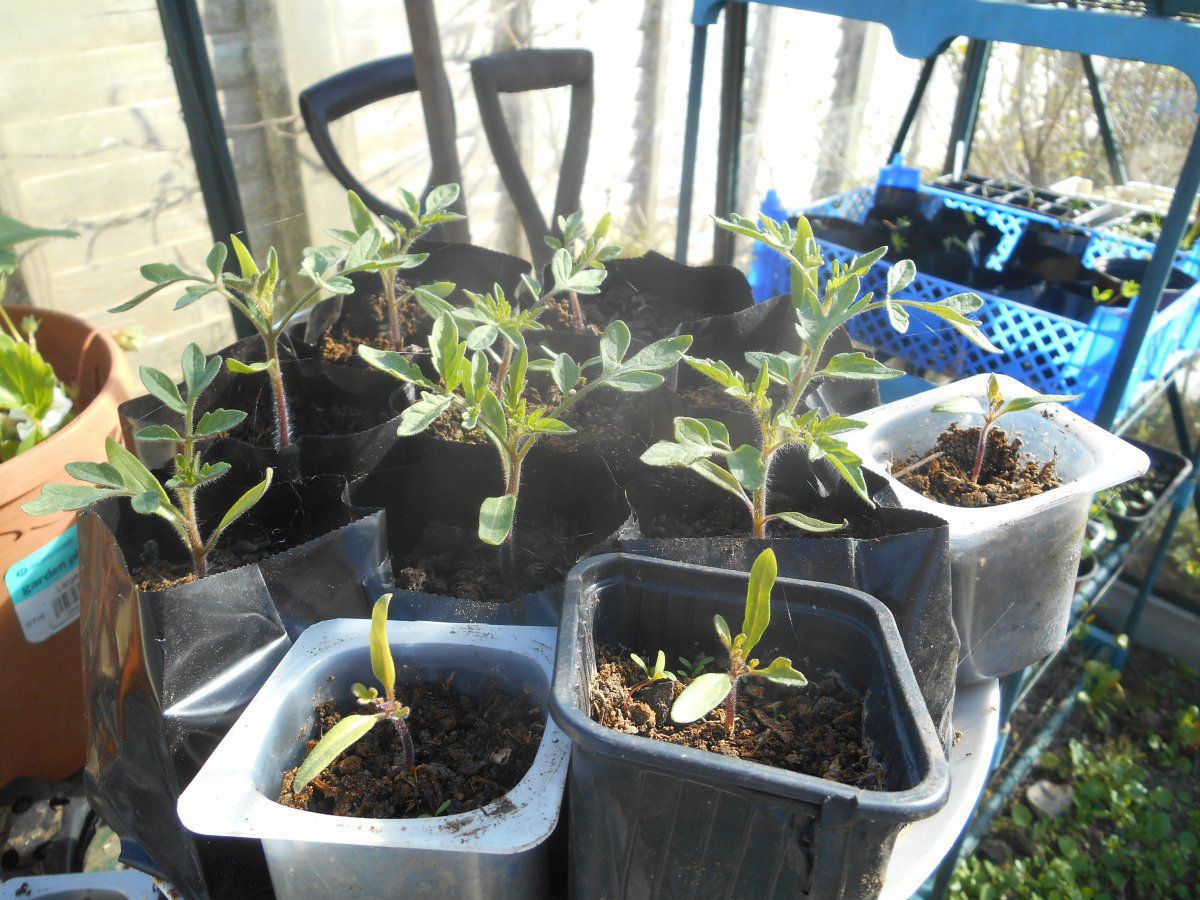 I'm excited. I'm really looking forward to getting the seeds

Is "cordon" the British way of saying "vine"?

Think so, as opposed to growing them as a bush

Maybe I'm a little slow. Do you mean it's indeterminate? Or determinate… where it grows 3 or 4 feet puts out lots of tomatoes then sort of moderates. When I hear the word "cordon" I think of grapes.
Ad

My caravan is approx. 22 miles NE of the Isle of Man.
It's too late to ask for a few seeds this year, but may I be cheeky and ask for a few next?

deepestblues said:
Do you mean it's indeterminate?
Click to expand...

Cordon is the same as vine and indeterminate.

Cordon is the same as vine and indeterminate.

Ok, thank you I had to look that place up on the map.

headfullofbees said:
My caravan is approx. 22 miles NE of the Isle of Man.
It's too late to ask for a few seeds this year, but may I be cheeky and ask for a few next?
Click to expand...

Just some information for those of you who have never heard of the Isle of Man. It's part of the UK but not of England, Scotland, Wales or Ireland. It's a Crown Dependency, has its own government and its own currency. It has the oldest continuous parliament in the world.

If you can understand that, I salute you

Wait till Sheal gets her hands on you!

Bootsy said:
Wait till Sheal gets her hands on you!
Click to expand...

You've done it now, she'll be round
Ad

Hi everyone, you called? I'm a new member as of today and have to start somewhere so it might as well be here. I apologise if I offend anyone but bare with me while I make a couple of corrections to the information on the island.


headfullofbees said:
My caravan is approx. 22 miles NE of the Isle of Man.
Click to expand...

Is your caravan in Scotland headfullofbees?

Bootsy said:
. It's part of the UK but not of England, Scotland, Wales or Ireland. It's a Crown Dependency, has its own government and its own currency. It has the oldest continuous parliament in the world.
Click to expand...

The island isn't part of the United Kingdom but part of the British Isles and owned by the crown, it is not a member of the European Union either. It is semi-independent and has it's own government as Bootsy has said.

Bootsy said:
It's about 15 miles from Scotland and 30 miles from England.
Click to expand...

It's approximately 60 miles from England and a similar distance from Ireland.

I know that residents are, quite rightly, very proud of their status and I hope I didn't offend you.

Apologies for the U.K. bit I was a bit lax in my definition. As you say, it's a Crown Dependency which was purchased by the British government, originally, in 1765 and the rest of the rights were bought in 1828 from the Duke of Atholl's family. I never did quite work out how it became Crown property when Parliament purchased it.

The distances that I quoted were not from points of 'civilisation' but from nearest points of land. The measurement of the distance from Point of Ayre (Isle of Man) to St Bee's Head (Cumbria), on the Ordinance Survey map, is approx. 30 miles. Not that I think anyone has every bothered to travel between those two points but I have waved to you from St Bee's Head!

Whoops, I thought Sheal was already a member.