Could anyone please help me indentify the disease that's killing my mango plant and advise me what to do? The leaves are just drying and crumbling from the tips and sides. Also leaves and stem are quite sticky, not sure why. Would appreciate any help. Thanks!

Here are some photos:

Looks like sooty mold and aphids plus overwatering to me.

Hello and welcome @Eva.ge I do not know anyone who has successfully grown a Mango in a pot. This is an enormous tree and is not suitable for container growing.
https://garden.org/plants/view/74352/Common-Mango-Mangifera-indica/

On the contrary it is possible to grow a mango tree in a pot. I have two of them. Some people even try to grow them as bonsai though they're never really going to look the part because both the leaves and fruit are far too big.

Hi @Gina145 I was basing my comment on the quoted link, also on the fact that the mango in question is not being grown as a bonsai, also here on the forums it seems like the problem comes up about once a month (search "mango" in the upper right corner of the GF page to see how many dead and dying Mango trees in pots we have). It seems to be a never ending problem. If you know of people who are growing mango in containers (that are not bonsai) successfully, perhaps they can post to the thread to give some encouragement to @Eva.ge as well as suggestions. Photos would help too. That would be wonderful and most appreciated
Last edited: Sep 12, 2017

I've got two mango trees growing in pots. This is the older one - approximately seven years old, and just flowering for the first time. Although it's in a pot it lives outdoors in summer and goes into my greenhouse in winter. It never stands in a saucer (except when I take photos) so there's no problem with drainage and no serious risk of over-watering. 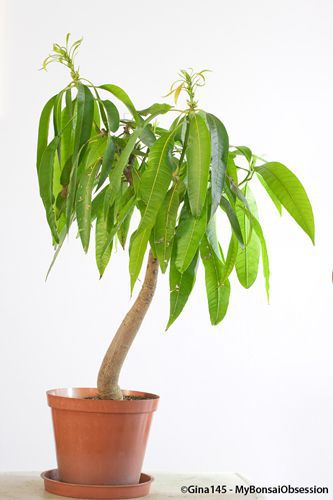 I've actually been meaning to post a thread asking for advice after reading that one should remove the first year's flowers for the long term health of the tree. A YouTube video I watched recently referred to a special method for removing the flowers, but didn't explain what to do.

This photo was taken in late August and the flowers have grown a lot since then.
Ad

Ooooh, thanks so much for the info and the photo, i hope @Eva.ge sees this. Any plans to transplant it to a larger pot, have you cut the tap root at any time during the 7 years it has been growing? How often do you fertilize? and do you think having it mostly outside and exposed to the air contributes to the success? Good drainage is essential. I am thinking this may be the key problem to so many of the failures we are seeing from members.

I was planning to move it to a bigger pot until it started flowering. Now I'm not sure whether to do so or whether to leave it where it is. I guess that depends whether I remove the flowers or not. I guess I should have cut the tap root but I never did and now I'm afraid to do it. I'm not sure how tolerant it will be of heavy root pruning as it's not a species the members of my bonsai club work with. I don't fertilise often because I've got too many trees (mostly bonsai in training) and can't keep up with everything that needs to be done.

Keeping it outdoors is definitely better for its health. Trees need to be exposed to the elements as much as possible.

I am growing a Neem tree (Azadirachta indica), also a tropical tree, in a container. I had read that it will adapt well in a container so i am giving it a try. I have transplanted it 2 times and should have cut the tap root but didn't. I have cut the main trunk though at 1.5m (5feet) and it is now 1.8m (6 feet). It is growing outside year around and it is a fast grower...it is not yet 1 year old. When i was researching how to do this i was told to fertilize frequently and water frequently (very well drained soil). These are both tropical trees and can become enormous. The tap roots of trees growing in the soil travel far and wide to find nutrients and water, which is the reason for frequent fertilizer if growing in a container. I suppose when the root starts to come out the bottom of the container, i will cut it. Maybe @Larisa will become involved in this conversation, because she is knowledgeable about these sorts things and can give us some advice. I am fairly sure she will know about tap root cutting a 7 year old container grown Mango. When the tap root is cut, it weakens the tree somewhat...not much of a concern for container grown, and the lateral roots will be encouraged to grow more. Just how much to cut, i am not certain about and what time of year is preferable to cut i am also not certain (technically i have no winter). I'm not sure if the OP is still around, but i think the conversation is interesting, especially related to Mango

I looked the same topic on our forum. Our gardeners cut off the roots a little, but still they recognize that this is a risk. After pruning the roots, the mango can get sick.
This mango is seven years old. I suspect that the roots there are closely intertwined. Perhaps it will not be very clear where to cut them.
Perhaps it will be easier to transplant into a large pot.

Cutting roots is a big part of the art of bonsai but some species handle it better than others. That's why I'm a bit nervous when working with a tree that isn't usually used for bonsai. Perhaps I should try to find out from people online who've actually grown mangoes as bonsai, but I have no plan for trying to squeeze my mango tree into a tiny bonsai pot. When I repot it, it will definitely go into something bigger, but there's a limit to how big a pot I can cope with, so there may come a day when I need to cut roots.
Ad

Thank you @Larisa for sharing your ideas here

@Gina145 I think your Mango is very pretty as it is and you are getting flowers. I may go one pot bigger for my Neem, maybe in the next year and possibly transplant to another pot. I have the pot now on a platform with wheels (tree on wheels) 8.5 cm (3.5 inches) off the ground, enough space to see if roots are coming out of the bottom and to be able to cut those roots. I would actually like to keep it in this pot and will do if the trunk becomes more substantial and the rest branches out well with a good canopy after having been topped. I think we are in experimental territory here, most significantly with the Mango. I hope you find someone with a Mango bonsai to chat with but an glad to hear you are not going to bonsai it.

Thanks @Beverly . I probably will move it to a bigger pot eventually, I just don't think the timing is right. I've never even considered bonsaiing it because everything would be out of proportion. A bonsai is supposed to look like a miniature tree and that's not achievable with mangoes because the fruit are too big.

The issue of removing the first season's flowers became a non-issue because a heavy hail storm knocked them off before I got around to doing it. The tree didn't grow much that summer and didn't produce any flowers the next one, but in spring of 2019 it finally flowered again. Fearing hail would hit it again, I moved it back into the greenhouse where it's been ever since. It's near the door though, so it still gets sun and wind.

The added protection did the trick. It grew four mangoes but one of them rotted very early on. However the other three eventually ripened and one of the smaller ones fell off a few days ago, so we were able to eat it.

I still haven't repotted the tree but will have to move it into a bigger pot next spring. 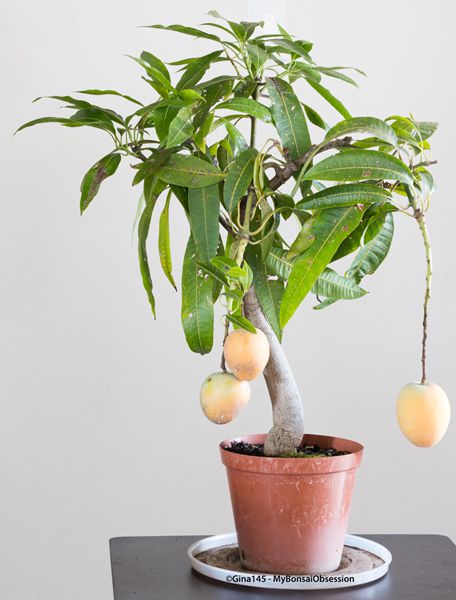 Gina145 said:
The issue of removing the first season's flowers became a non-issue because a heavy hail storm knocked them off before I got around to doing it. The tree didn't grow much that summer and didn't produce any flowers the next one, but in spring of 2019 it finally flowered again. Fearing hail would hit it again, I moved it back into the greenhouse where it's been ever since. It's near the door though, so it still gets sun and wind.

The added protection did the trick. It grew four mangoes but one of them rotted very early on. However the other three eventually ripened and one of the smaller ones fell off a few days ago, so we were able to eat it.

I still haven't repotted the tree but will have to move it into a bigger pot next spring.

Wow Gina, what a beautiful tree. Kudos to you.