Hi! I'm a new member. I have a medium size lilac tree (type unknown) which has done just fine for years, but in the last two weeks the leaves quickly started turning brown and curling, until they became 100% brown and fell to the ground. No yellowing, no clear sign of white spots, no visible pests or evidence of pests.

On top of that, the ground around the tree, which normally is covered in THRIVING creeping jenny that we need to cut back, ALSO has gone brown and dead. The ground does have some bits white whiteness or grayness. It has just been August, and we are in Maryland, maybe this is a fungus caused by the climate? It isn't in a too-sunny area, and we don't think we've underwatered it at all. Could be root rot? The soil where it's planted, and the slope below it, is very dense clay-like soil that we've tried to amend for a long while but we can only do so much. This same area has caused root rot for lavender, but we have many other plants and grpundcovers in this area that have done just fine (usually selecting for hardiness).

Interestingly, we're also now seeing a small new growth of leaves on one branch, plus what appear to be new buds at the end of many branches. This makes little sense, as it is September and we pruned this in June after it's blooming was done for the spring.

Any thoughts on what this is?? Pics attached. 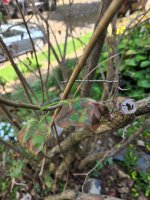 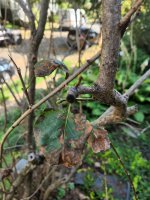 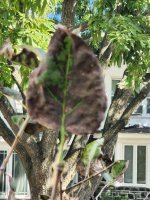 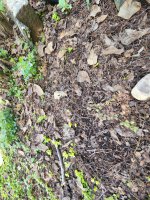