It's the Way You Ask.

I'm fairly good at DIY, I'm of an age when if you didn't do it yourself, it didn't get done as you couldn't afford to employ someone. But for a few decades I haven't had to do anything major myself that needed doing, if I didn't want to do it myself.
We have a "coal hole" in the side of the house it's under the stairs, but accessed by a half-door outside in the wall. It was never used for coal as the fist owner installed central heating, but it's handy for me to store my leccy golf trolley, golf shoes and car cleaning stuff. But the door now 55 years old was rotting away.
So I decided to replace it with a door made from half inch ply.

I went to our local wood yard and found a piece more than the size I needed in the "off-cuts" bin, sadly I relalised, that it was decorative plywood, the exterior veneer comes as Ash, Oak, Mahogany ,or whatever you want. but it's no good for outside use as the top layer will eventually peel off if it got damp.
So I had a word with one of the cutters.

"Excuse me, I need some professional advice."

Unless you're aware, you've no idea how many doors that phrase opens.

"Is this any good for exterior use?"

I explained what I wanted it for. So he went off to the back of the machine shop and came back with a full sheet of "the good stuff" put on the bench and cut it in half.

"What size do you want it?"

So I gave him a bit of paper with the measurements.

He cut it to size and then brought it over with the off-cuts which was nearly as much, but in two pieces.

He laughed and said "No mate, but I'll write off-cut on your bit of paper and you might get it a bit cheaper."

So I left the wood by the cutting room counter and went back to the front desk and handed them the bit of paper. It still had the size of the door on it.

They guy read it and looked the size up on the chart and charged me £10, it should have been between £30 and £40 plus a pound each for the cuts!
The new hinges cost more!

Anyway it's nearly done. I've used the off cuts to strengthen it, because plywood will try to warp given a chance. 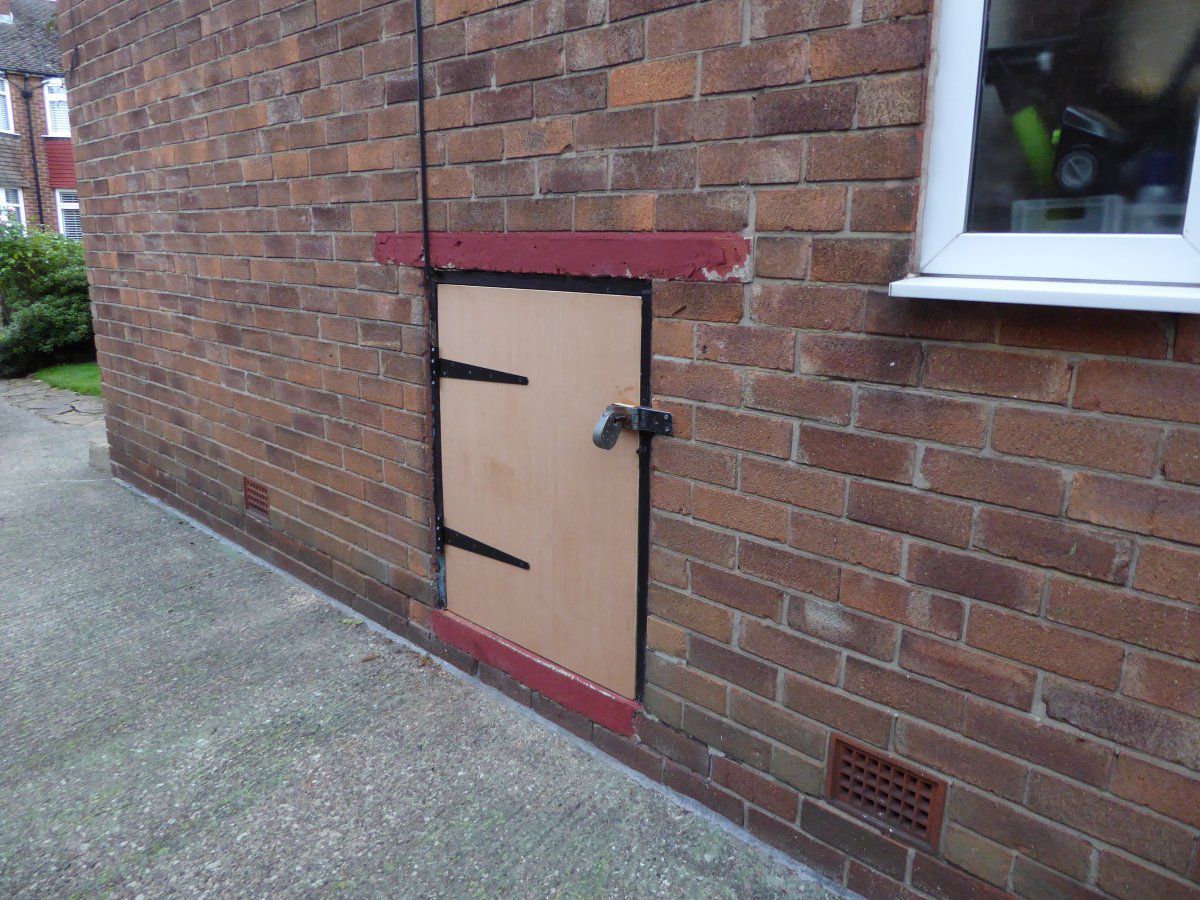 Two coats of Dulux Trade Mahogany Ultra Woodstain (at £59.99 for 2.5ltrs would you believe) inside and out and a third to follow. It's not a paint run down the middle, it's a darker line in the grain, another coat will make it disappear.

I've also got to finish tidying up the frame and repaint it and the hasp and staple black.

But the job's a good un!

The paint will be used for another coat on all the other woodwork in the garden, "in due course."
Ad

I always enjoy hearing about all the efforts we go to where our above ground caves are concerned. Exposing organic material and how many varied ways it can be protected amaze me. And on top of that, the architectural aesthetic is so often superior to anything I would have considered. I always feel oafish viewing these threads.
Ad

Really looks good. Looks like the hinges remained usable in the brick. Or that would have been another issues to drill more holes in the brick. At HomeDepo. which is a large hardware store in my state. they often have left over pieces of wood, or some scraps back in the corner for free. Have been able to find some I needed once and the kind men on duty cut it to size for me. Sometime it pays to be a women, in these cases they love rescuing the damsel in distress. And they did it, and the materials were free. I also pick up free pallets from them cut in half. Its a perfect size for my outdoor little ladder to help my cats get through their doggie door, of course I slop on lots of out door primer and paint first. So that is what a Coal Hole looks like. don't see them here much.
You must log in or register to reply here.