Is the sun getting hotter?

Is it just my imagination or was summer 2019 the summer of the burning sun. I have several younger trees in the yard that have scorched leaves for the first time. I could not move my bonsai trees to full sun without leaves being burned. I used to put them in full sun in Florida and not have problems. I noticed that a lot of the farmers in our area have burned corn and tobacco and will have little to no harvest this year. We have had plenty of rain so that’s not the problem. Did anyone else have problems this year?
Ad

Enough rain here in Alberta, we always have intense sun during the summer but I noticed some scorched leaves on my pagoda dogwood that I planted in part shade just this spring, not bad scorching but I was a bit surprised. I spend so much time outside, never use sunscreen, and never seem to burn, must be that Cree blood in me.

Please don't say that. The Global Warming Crowd will blame us gardeners for it. It's all those polluting roto-tillers they'll say.

Really, I think all it is was that most of the summer most of us were under high atmospheric pressure. I know that where I live we had the third longest run of days 100+F in recorded history and the entire time we were under high pressure.

Everyone knows it’s cow farts that cause global warning.

And I was blaming it on mine all this time!
V

Actually, it is getting hotter (the sun), by some infinitesimally tiny fraction of a percect a year (6% every billion years). So yeah, global warming.

Note: I have no idea why that useless tidbit is bouncing around in my head. No doubt I've forgotten a birthday or two to make room for it!
Ad

I had a major problem with plants getting burned this year, which was a very hot year, but it's not the heat, it is the sun's rays that was the problem. There's a big difference there, that I don't think most appreciate.

EDIT: BTW, my biggest problem was from a Sparkleberry (Vaccinium arboreum)I planted this year that lost its leaves twice from burning, but after covering the plant during the afternoon, it grew them back, but is not looking very healthy now.

I know it was the sun's rays that did this, but I'm also wondering if this "native" plant might have its origins up in the northern regions of its range, thereby not having the genetics to deal with the more intense rays of Florida's sun.../???
Last edited: Sep 2, 2019

Silentrunning said:
Is it just my imagination or was summer 2019 the summer of the burning sun.
Click to expand...

Not here, it's been a wet year as well as summer and seems set to continue for the time being.

johnny canoe said:
Enough rain here in Alberta, we always have intense sun during the summer but I noticed some scorched leaves on my pagoda dogwood that I planted in part shade just this spring, not bad scorching but I was a bit surprised. I spend so much time outside, never use sunscreen, and never seem to burn, must be that Cree blood in me.
Click to expand...

I watered so much you should call me Noah!

It's been the hottest summer on record
R

"It's been the hottest summer on record..."

They say that every year now...color me skeptical
Ad

I know I’m ready for summer to end

roadrunner said:
"It's been the hottest summer on record..."

They say that every year now...color me skeptical
Click to expand...

Yes maybe but it's true.

Its your brain melting !
R

I really do believe that increasing atmospheric CO2 levels are a good thing.

But, plants start dying at 150ppm. Climate is just too complicated of a phenomenon to think that CO2 is the control knob.

However, if this is your belief that it is the climate control knob, know that in order to reduce it, there is currently no technological solution to that end. The only way is drastic reductions, which I don't believe most people understand just how drastic the reductions would have to be; however, Greta Thunberg hints at them in her plea to the UN.

I find it disgusting that the people pushing the man made global warming agenda have to frighten young children to the point of tears to push their agenda. This little girl is just an example of what is going on in our schools today. I would think that if there were any hard data that could prove conclusively that current global warming was man made and not a result of solar cycles, it would be brought forward by the scientific community. Instead, the “warmers” march out a never ending chorus of emotional actors crying about the end. If they truly thought the planet needed saving they would be working on viable solutions not just trying to separate wealthy people and companies from their money. Yes, the earth is getting warmer! No, taking money from people in the form of carbon taxes won’t stop it.
Ad

Crap! I just drifted my own thread.
F

There are a couple of things that people should be aware of in regards to Greta Thunberg. One of these is that her campaign is being carefully orchestrated by a PR Company. In her home country, its well known, even if it has been denied. Second, she is becoming a very wealthy young woman due to all this, and has even been nominated for a Nobel Prize.

Its as one politician said (and was ridiculed for it) "The place for a sixteen year old is in the classroom getting an education.! 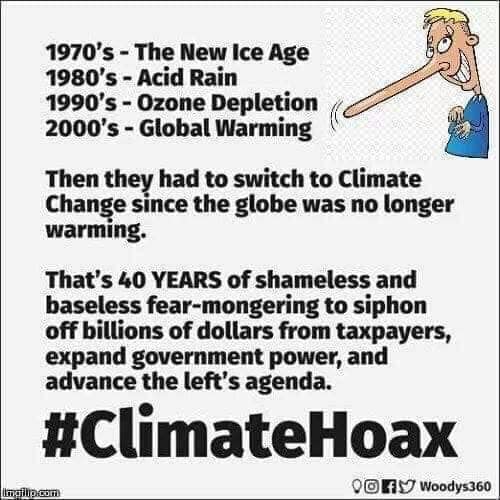 Silentrunning said:
Crap! I just drifted my own thread.
Click to expand...

I enjoyed your rant though so its cool.
You must log in or register to reply here.