These carrots are going to drive me nuts. Between unexpected deluges, high heat and whatever did this damage, it's new against nature! I'm guessing it's a squirrel. How do I keep them out of my carrot sprouts? An air rifle is definitely in my future, but that honestly won't do much. They out number me about a million to one! I really want the carrots to work out, and if they do I plan to do more in the spring when I get the raised beds done. It's hard to see the damage, but the bare spot used to be full of sprouts. Something dig around a little and damaged and buried a bunch of them. Lucky he didn't root out the entire container. ... Ignore the hole on the right, that was where I stuck an umbrella to block the rain.

Cover the container with chicken wire. The plants will grow up thru it. Then when the plants are large enough remove the wire.
V

I think I'll have to switch to chicken wire. But for sure, no squirrel is getting through here! 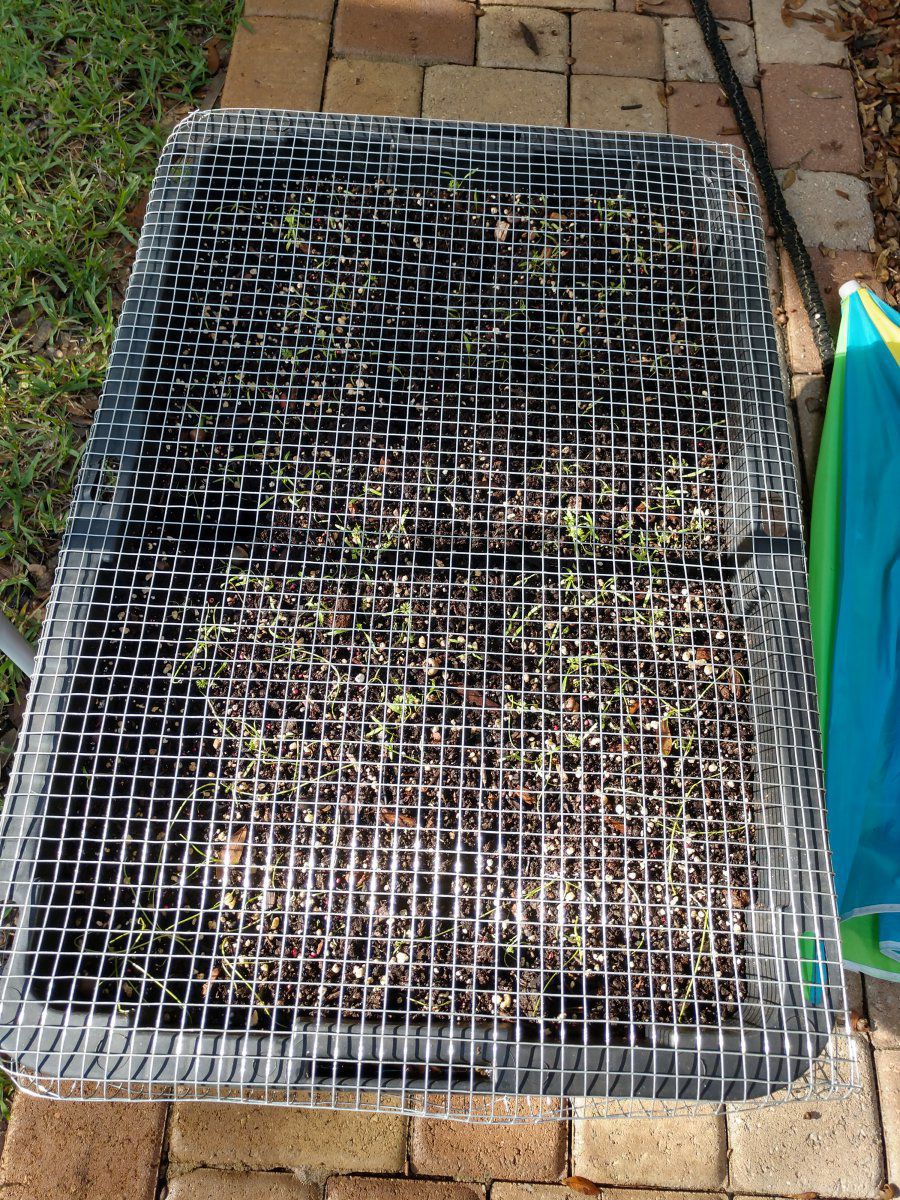 I got squirreled in the garden. They like the soft dirt to bury the hickory nuts and acorns. I guess I will have big weeds at some point.
Ad

DM, how do you keep them from ripping up the seedlings in your garden?

Mainly we feed them treats until they are so full they do not care. Literally started this with the deer. But a food source increases population so I will thin them with a pellet gun until we have some but they are not being forced into every nook and cranny for territory. They do not like being exposed to the sky as they are in the garden, and generally do not go out into the yard or garden because of owls and hawks and no trees to scamper up if threatened. When it is a problem I just did not get around to removing them. Sometimes it is not squirrel, but rather chipmunks. The cats usually help with that population. I can use covered bait on rodents.

Every once in a while my mean streak surfaces. When we lived in Florida we had squirrels everywhere. They were destroying my garden as well as landscape plants. I went and bought a large bag of peanuts and started feeding them hoping they would be full and leave the plants alone. One afternoon I got the idea to drill a hole in some of the peanuts and tie them hanging from tree branchs with a long length of fishing line. It didn’t take them long to figure out to chew the line and the nut would fall to the ground. I switched to piano wire and they couldn’t chew it. I greased the wire to make it even slipperyer. This gave us hours of entertainment and we would actually have neighbors come over to watch the squirrels try to get the nuts. A little wine helped make it great sport. BTW squirrels always land on their feet like a cat.
V

Has anyone tried any of the repellent sprays or packets. Seems peppermint oil is the common ingredient. Curious if they work at all?

Seriously, smell is one of the easiest and biggest deals of all. Two cycle gas and oil clings the the metal of my gutter pipe for months. When I have some that is too old from an unused machine, I decant it from the tank and dribble it into the gutter and squirrels refuse to nest in them
Ad

DirtMechanic said:
I got squirreled in the garden. They like the soft dirt to bury the hickory nuts and acorns. I guess I will have big weeds at some point.
Click to expand...

I had this early this year with nuts and the gravel all over the show around this plant i'd just brought...it took me a few years to get rid of them after they was destroying my lovely bottle brushes but I still lost them to last years winter 7 in total it broke my heart with the work I put in to them.