I've posted about this on other threads but perhaps it deserves a thread in its own right because it's unusual.

My chum David owned this Sovereign Classic 35 mower for twenty years and lately it developed a fault where it would run quite normally for five minutes then die; it wouldn't then restart for 15 minutes until it had cooled. There are many YouTube videos showing such a fault to be fuel starvation it being a carburettor problem so David bought a new diaphragm; air cleaner; spark plug and changed the oil but the problem persisted so thinking it still to be a carb fault he bought a second diaphragm thinking it must be the diaphragm; still no success so next he bought a brand new carb and yet the problem remained. David couldn't spend more time on his erring mower due to more pressing demands upon his time so he bought a new Honda mower and generously gave me this problem mower to tinker around with.

Weather permitting we meet at Rufforth Auto Jumble the first Saturday of each month and last Saturday David kindly brought along the mower handing it over to me with the spare original carb and parts lists. We live 70 miles from each other so it's not a case of popping round. Last Saturday afternoon I fired up the mower and sure enough it died after five minutes running; I had absolutely no doubt David had done a top job with the fuel side so I left this well alone.

Last Sunday I was keen to play with this mower; I did a cold resistance test on the plug lead to ground and all appeared well; I then fired up the mower letting it run until it died then I did a very quick hot resistance test and again it was fine; I pulled the still hot spark plug and using my new spark tester the plug still had a spark; just to be certain I then poured neat petrol (gas) into the carb intake; the mower roughly fired up indicating the electrics were fine.

This was now getting interesting; not in a hurry though I then set about decoking the engine and grinding the valves in; the engine was well coked up but I knew doing the decoke wouldn't sort the problem out but at least I then new the compression was OK so now back to the original problem. The fuel side was sorted with fresh fuel; new air filter; and now brand new carb; it also showed it definitely had a spark and compression was fine so this mower was on a wind up having already tormented David now it wanted to torment me?

I seldom trust other peoples workmanship but I fully trust David so I wasn't about to follow his lead and the YouTube videos and start playing with the fuel side. What I did was to stand back and give it some thought; normally with a fuel starvation an engine will run until the carb is empty; with a diaphragm carb running time is much reduced compared to float bowl type carb but this mower was running a full five minutes before dying so I smelled a rat and wasn't going to jump on the merry go round chasing my tail.

I left the workshop and settled down at my computer; I know about magnetos but I'm unfamiliar with mower engines so how was the spark delivered after all there were no ignition points and I knew exactly what I wanted to search for; I wanted a magneto circuit diagram showing one of these magnetos. I quickly found a suitable diagram and also quickly found what what the problem most likely was. This magneto has embedded electronics to trigger the spark; capacitors are unreliable but as soon as I saw it had an SCR (silicon controlled rectifier) embedded it all suddenly fell into place; I've previously used SCR's on projects and know SCR's are prone to behaving strangely or failing due to heat hence I always used big heat sinks; at five minutes running yes the engine and magneto warmed up nicely so at this point I'm convinced the SCR broke down but after cooling it then kicked in once again but this time the engine ran for a shorter period.

I browsed eBay and found a seller of magnetos to suit this engine so I bought one and waited a couple of days for its delivery; when it arrived it was the wrong magneto but at least it was brand new and I wanted to test my theory so fitted it anyway; the curvature of the magneto laminations was well out not matching the flywheel curvature but I was fed up of waiting; having installed the new magneto I fired up the mower and WOW it went ballistic putting a racing engine to shame; in a panic I shut it down before the engine self destructed. When I initially tried to start it with this incorrect magneto installed the cord grip was violently dragged out of my hand giving my arm a very nasty jerk; as soon as the engine fired up I knew it was running with far too much ignition advance but now I fired it up once again and this time tried to keep the revs down using the hand control; it was difficult because the engine wouldn't run evenly but I ran it for over ten minutes so after all it was an ignition not a fuel fault; I stopped the engine and now await the correct magneto to arrive next Monday or Tuesday knowing once fitted the mower will then settle down and behave.

Knowing the compression to be good and having done three separate tests on the ignition I confess the problem sure looked like fuel starvation but in my favour I never ever trust anything with electronics included; Please don't get caught out simply following YouTube videos and I don't know why so many feel the need to post so many video clones showing carb problems?

I hope this helps. 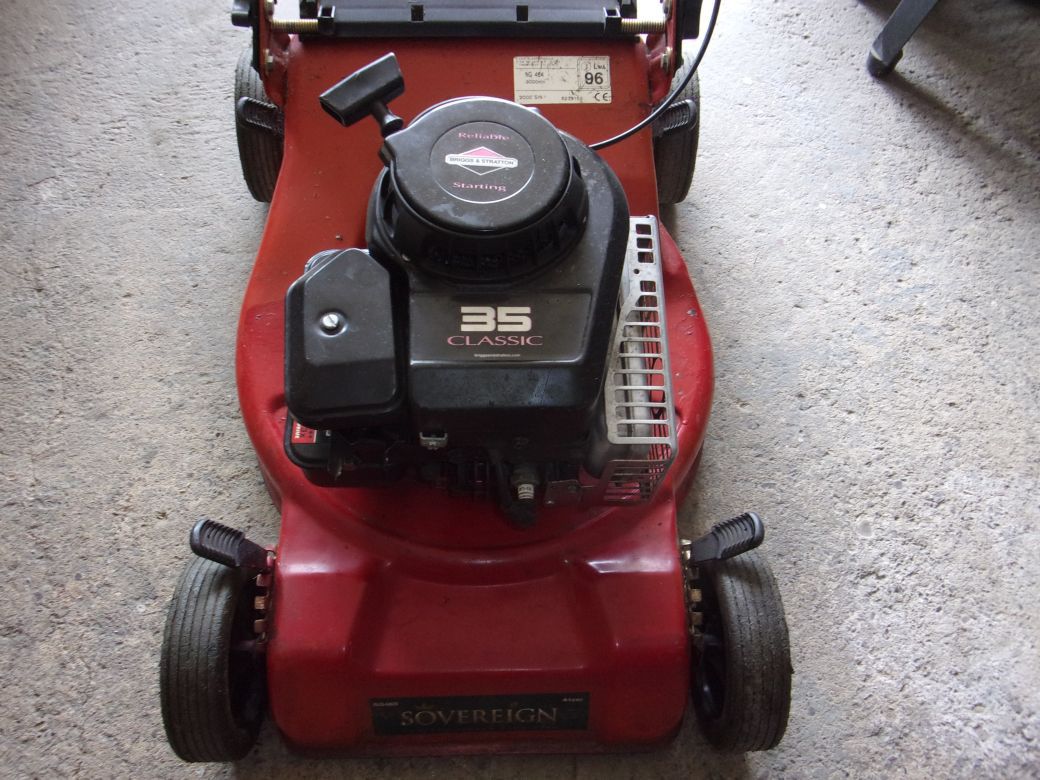 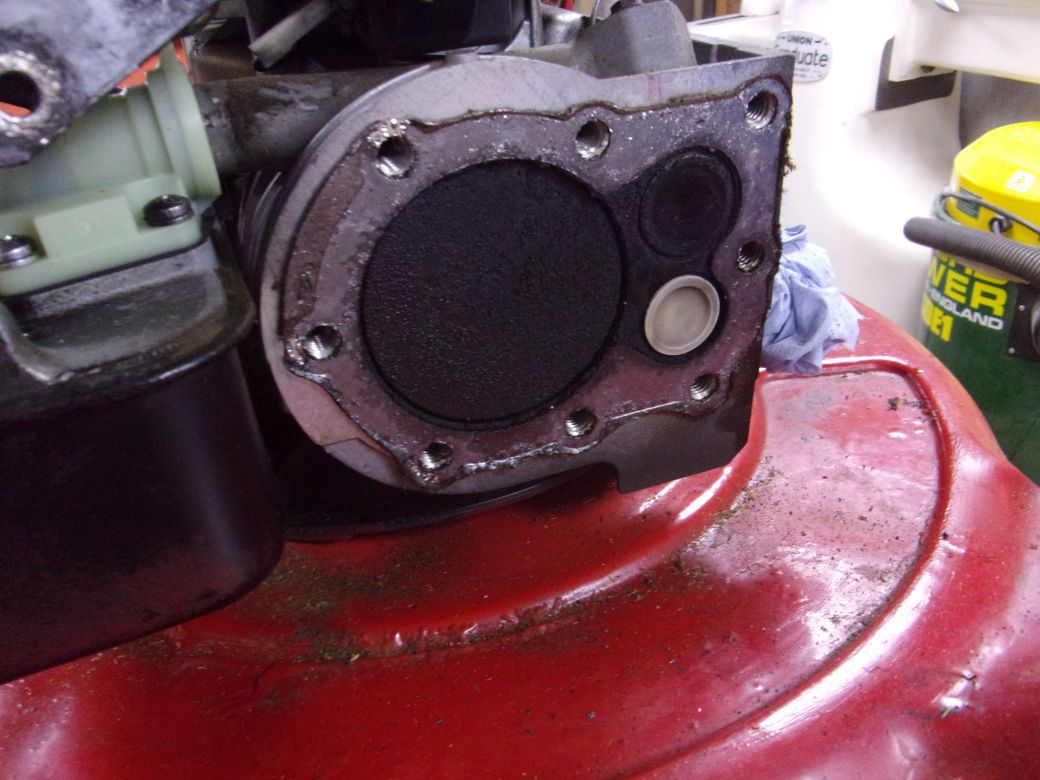 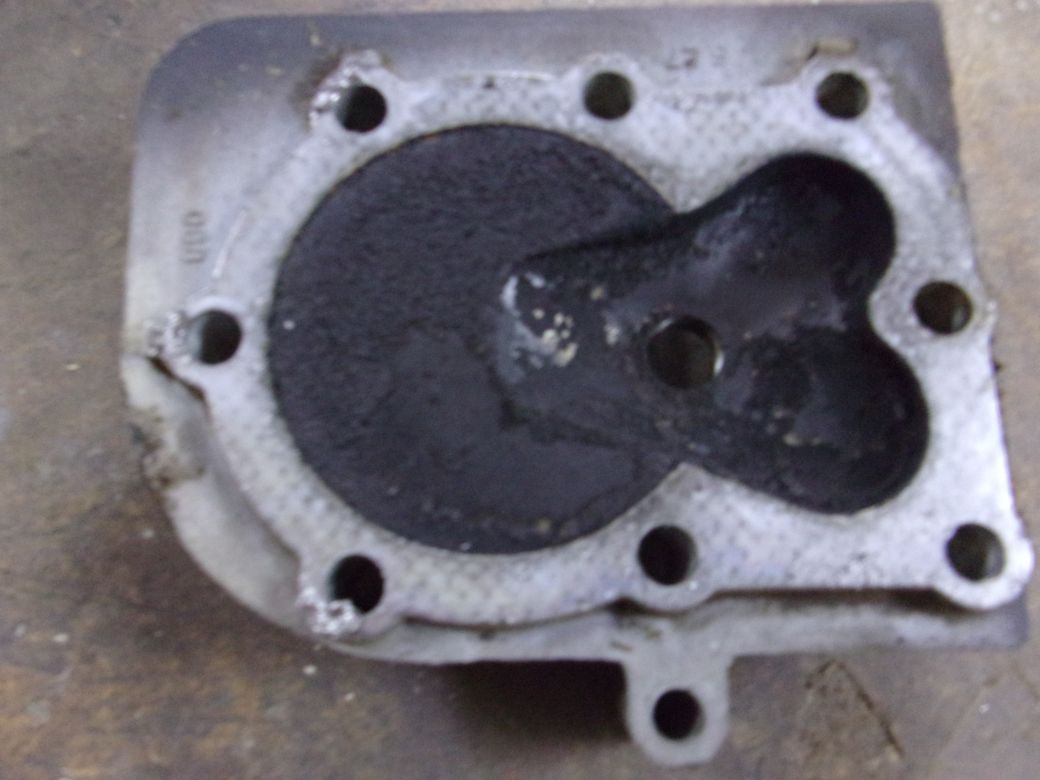 Definitely ready for a decoke. 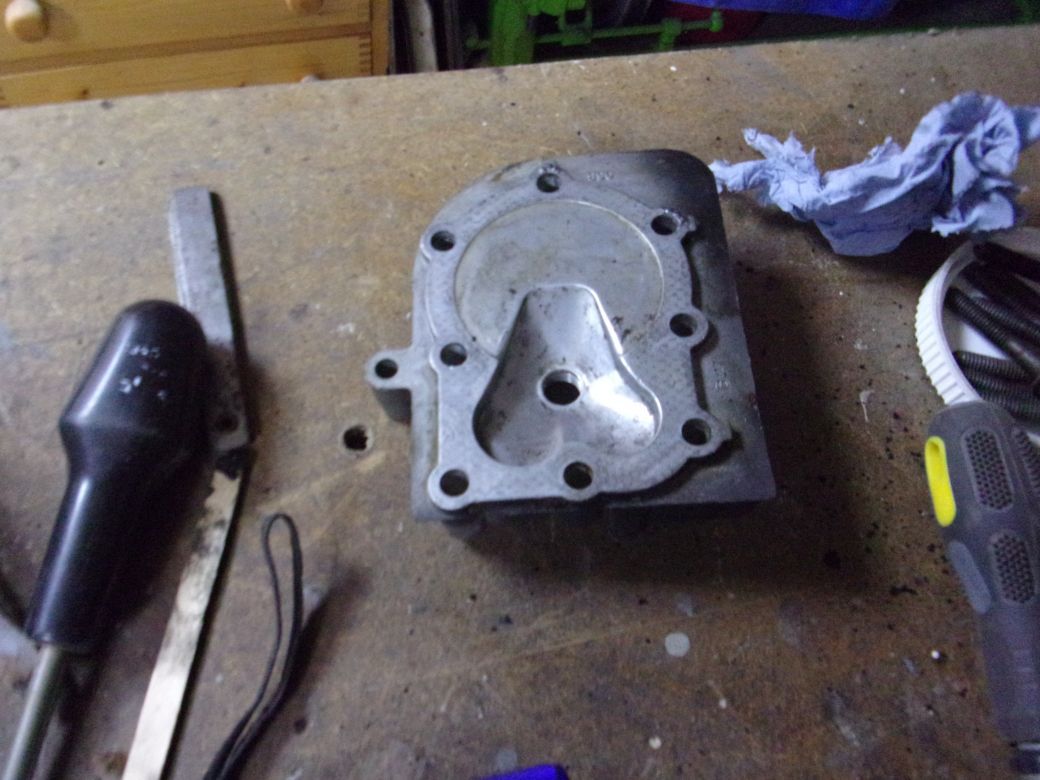 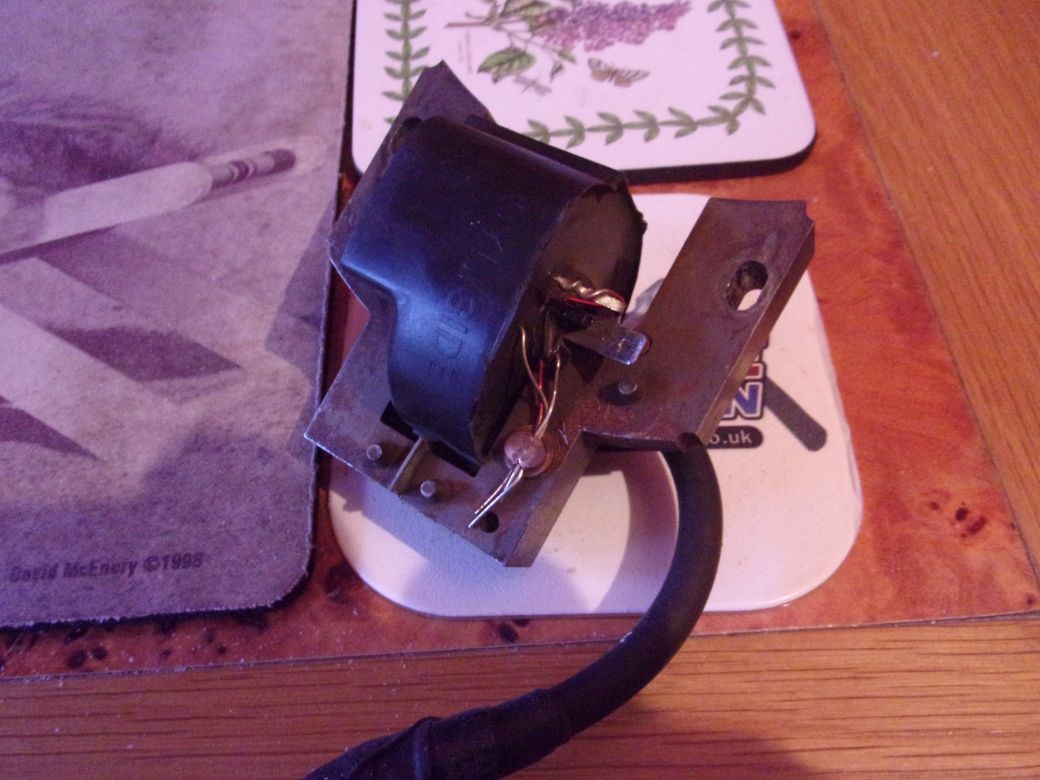 The cause of all the trouble; the failing magneto; if this is original then the wires look incredibly crude. 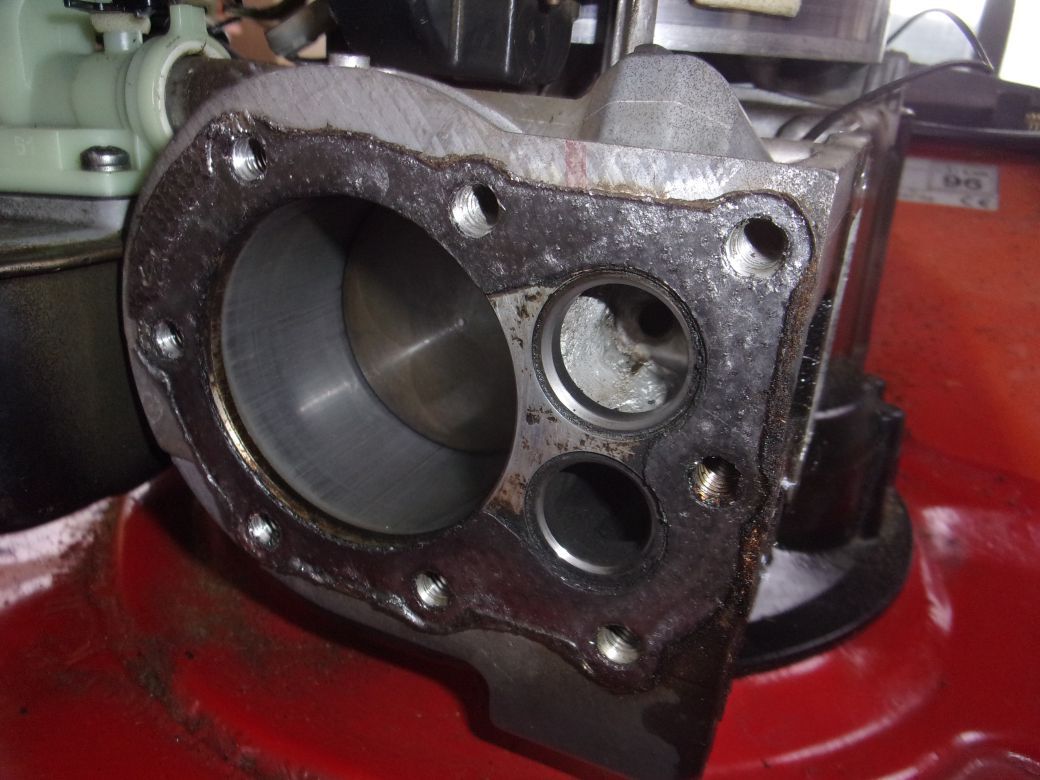 Valve seats nicely reground; not having a new head gasket the original head gasket was reused. 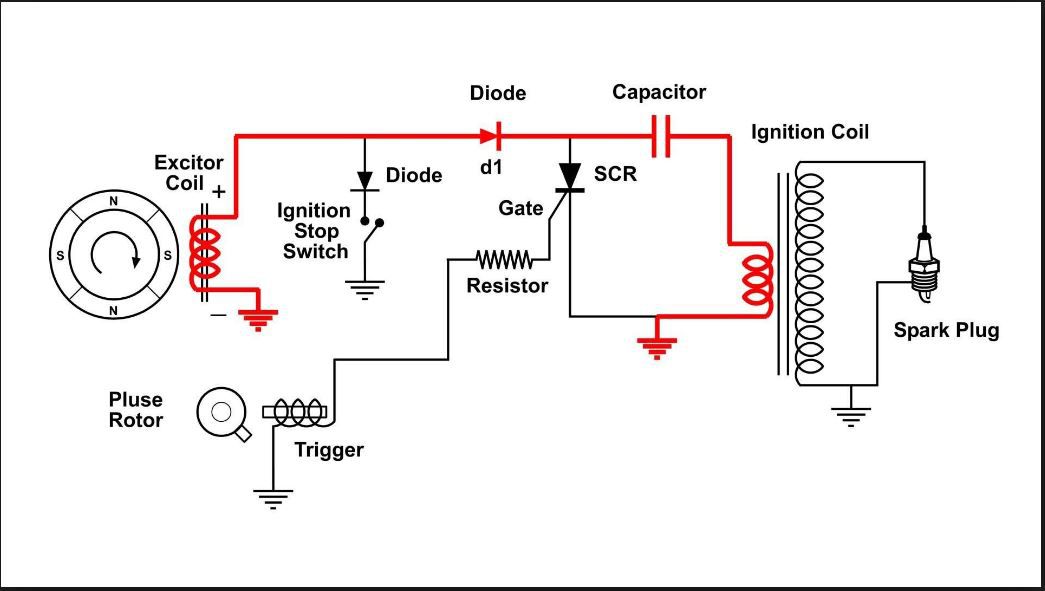 Magneto circuit diagram not for this mower but gives me enough information and as soon as I saw it included an SCR the problem was solved.
Last edited: Apr 13, 2019
Ad

And to think I was going to say check for a plugged gas cap vent!

Thanks DM. Actually a very good suggestion because quite a few will get caught out with a plugged gas cap (tank filler cap) which should be vented to the atmosphere. David removed both the cap and air filter as first tests.

Thanks DM. Actually a very good suggestion because quite a few will get caught out with a plugged gas cap (tank filler cap) which should be vented to the atmosphere. David removed both the cap and air filter as first tests.

Your confidence in his work eh? Thanks for posting the decoking. I have one coming up and have been very interested to see the pictures.

Yes I have total confidence in David's workmanship but anyone else I would double check; David is also up to speed on electronics in fact he's better than I am but then I've only ever done electronics on a need to do basis.

Decoking one of these mowers is easy as you'll probably know DM; this one is a side valve so even easier still; I don't have a torque wrench but I'm used to tightening head bolts using the diagonal method in order they all go down evenly. Once the valves are ground in then the valve gaps need checking; I've always checked valve gaps at TDC (top dead center) both valves closed. You'll also recognize these too; 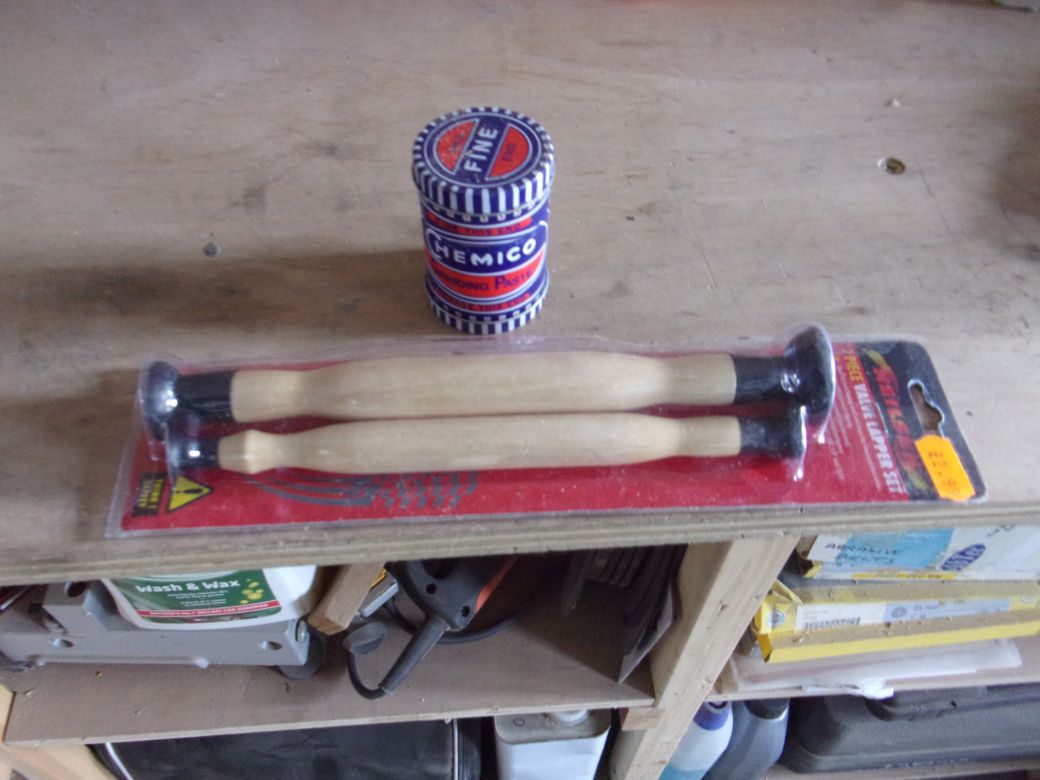 Decoking an engine is quite expensive to have done letting it out but is very cheap to do at home with a little knowledge. Ideally new gaskets should be used but I've often used original gaskets without trouble. The valve grinding paste seen in the picture has been available for donkey's years; during the many decokes I've done I've never had to use the coarse paste; in grinding all that is needed is a continuous ring of bare metal on both valve and seat then quit; it's important to remove all traces of the valve grinding paste then liberally oil the valve stems and a squirt of oil into the valve guides upon reassembly also oil the piston bore; I've not come across these valve spring retainers previously but they are incredibly easy to refit once the valve spring is compressed. I'm used to the valve spring retainers having a pair of collets with an inner and an outer spring needing a spring compressor so as I say these engines are very easy and cheap to decoke. I removed most of the carbon using a simple lollipop stick; for the piston crown I used a safety single sided razor but care is needed not to damage soft aluminium; on cast Iron I have the correct decoking brushes used in an electric drill. Cleanliness is most important and don't forget to check the valve gaps before reassembling everything because these gaps aren't adjustable with the cylinder head back in place; the valve stem end has to be very gently and accurately ground if the gap is too small or a valve seat cutter is needed if the gap is too wide. Take particular note of the cylinder head bolt locations and make a note; all the head bolts on this engine are the same length. When I had my garage business decokes were common and with frequent oil changes unlike now when decokes are a thing of the past and oil changes not less than once per year. Mower oil though needs frequent changing because there is no oil filter at least not on these engines so the oil quickly becomes contaminated? I'm a dinosaur of a long time ago when car owners liked to get their hands dirty. Anyone still remember the Redex treatment; when we fuelled our car we always had a shot of Redex into the tank?

A real Sherlock Holmes!
You must log in or register to reply here.