Basil alive but not growing

Hi all, total newbie here. Not much of a gardener either.

I have a basil plant that seems very much alive and healthy, but it's not actually growing any leaves. It's just kind of staying where it's at. The stems(?) are upright and seem healthy. It's getting a decent amount of sunshine everyday, some days are cooler and I keep it inside, some sunny warm days I put it outside in the sun. But the leaves aren't growing at all. What might be happening here? Thanks for any help.
Ad

Not an expert on Basil or anything and not a proper gardener either, @marlingardener may offer up better explanation. I think Basil or coriander is monocarpic. The flower and then die. Parsley on the other hand is perennial and will grow year after year.
H

So your basil is in a pot, right?
Pots can very quickly run out of nutrients, so, if you haven't fed it for some time, I'd advocate an organic feed, like 10% urine in water, nettle/comfrey/manure tea.
B

This is strange given that basil normally grows like wildfire, in the right conditions I suppose. Photos would help.

I assume you grow your basil to eat. Silly question perhaps, but how do you harvest your basil? I see many people simply plucking the leaves off their plant, leaving stems with no leaves on it! The best thing to do is cut the entire stem / section off when you want to eat the plant. Your basil will thank you and grow back twice as strong If this is your case, then I wouldn't be afraid to cut the plant right back and let it start fresh.

I also don't think I like this 'bringing it in and out' business. Assuming there is no frost outdoors, the plant should survive outdoors just fine. Last year I brought a basil plant in from outside, as there was frost forecast. Within 24 hours, EVERY single leaf fell off - it was totally shocked and died!

headfullofbees said:
So your basil is in a pot, right?
Pots can very quickly run out of nutrients, so, if you haven't fed it for some time, I'd advocate an organic feed, like 10% urine in water, nettle/comfrey/manure tea.
Click to expand...

Christopher, welcome to the forums! Your basil is confused with the in-ing and out-ing. Basil is a warm weather herb, an annual, and it has only one season to do its thing. Leave it outside, moving it to a sheltered spot if the nighttime temperatures go below 45 degrees.
To harvest, cut a stem. Two will grow back and you'll have a bushy basil rather than a lank one. Since your basil seems healthy, you haven't done any damage to it.
One other thing--don't let it flower. When basil flowers it changes its taste, and not for the better.
Ad

Thank you all for the replies. I hear you about moving the plant around, inside/outside, it doesn't seem like a great idea. But actually I don't think this is actually the culprit, I've only been doing that a few days because the weather has been swinging so much from day to night. We've been having mostly cool cloudy weather, typically our spring in Colorado would be very warm and sunny.

What I have been doing though is pick just the leaves, leaving the stem. Someone here mentioned that's not a good idea and you should trim the whole stem with the leaf.

I've attached a few photos to show the plant. The bigger one (the bigger pot) is new in the last week. It was completely packed with leaves, which I have plucked from twice for making meals . I now know also that it is actually several plants stuck together, maybe I should have separated them.

The smaller one has been in this state for at least a month. Alive, but not regrowing any leaves. You can also see a bit of flowering. I'm worried that as I keep plucking occasionally, they will just be plants with no leaves eventually. 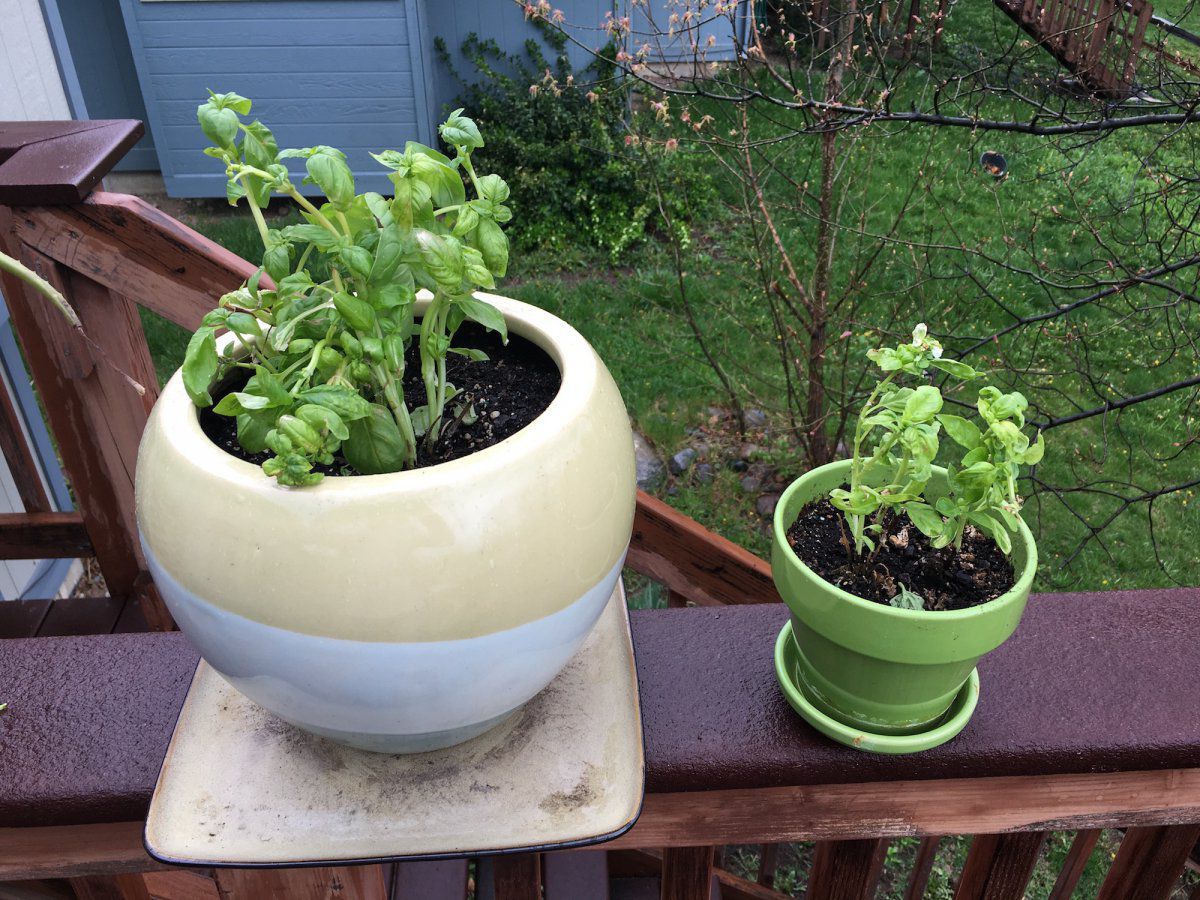 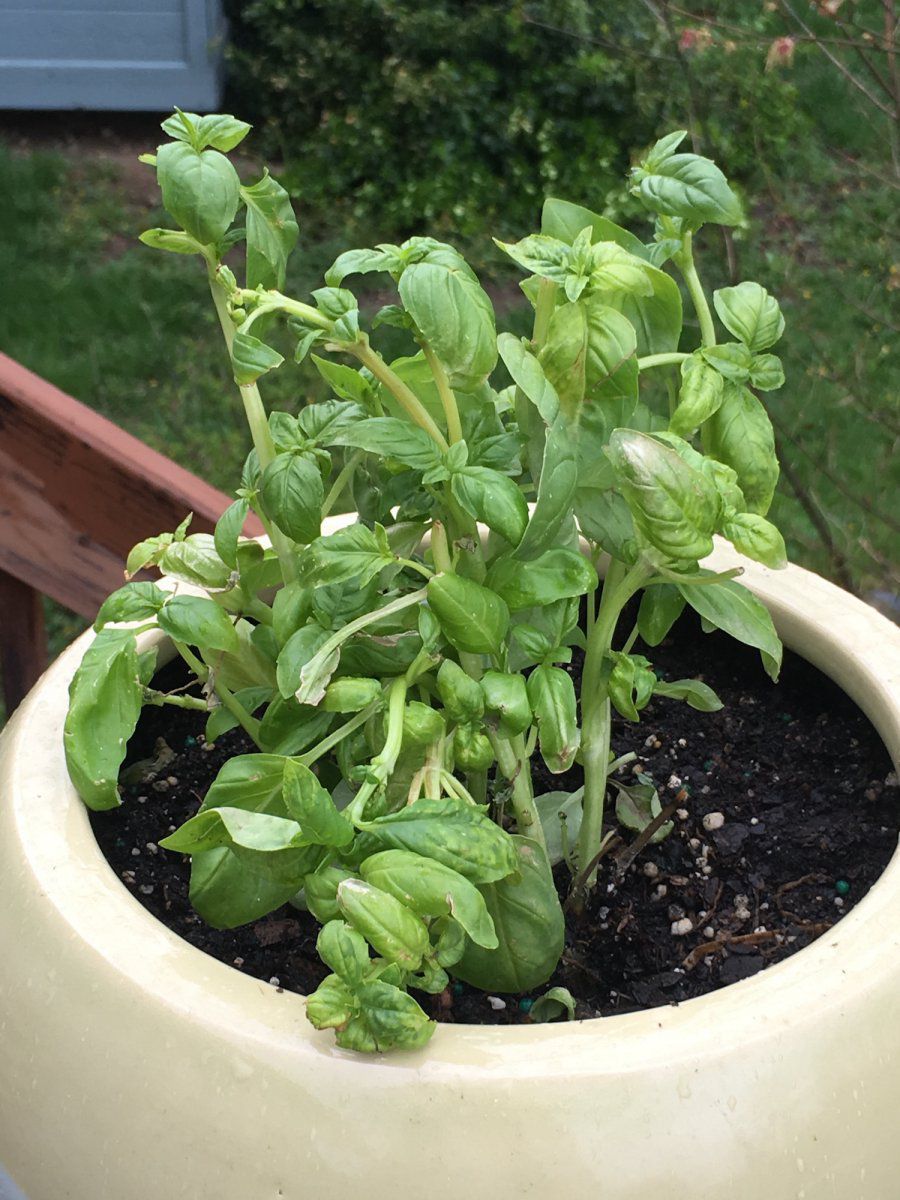 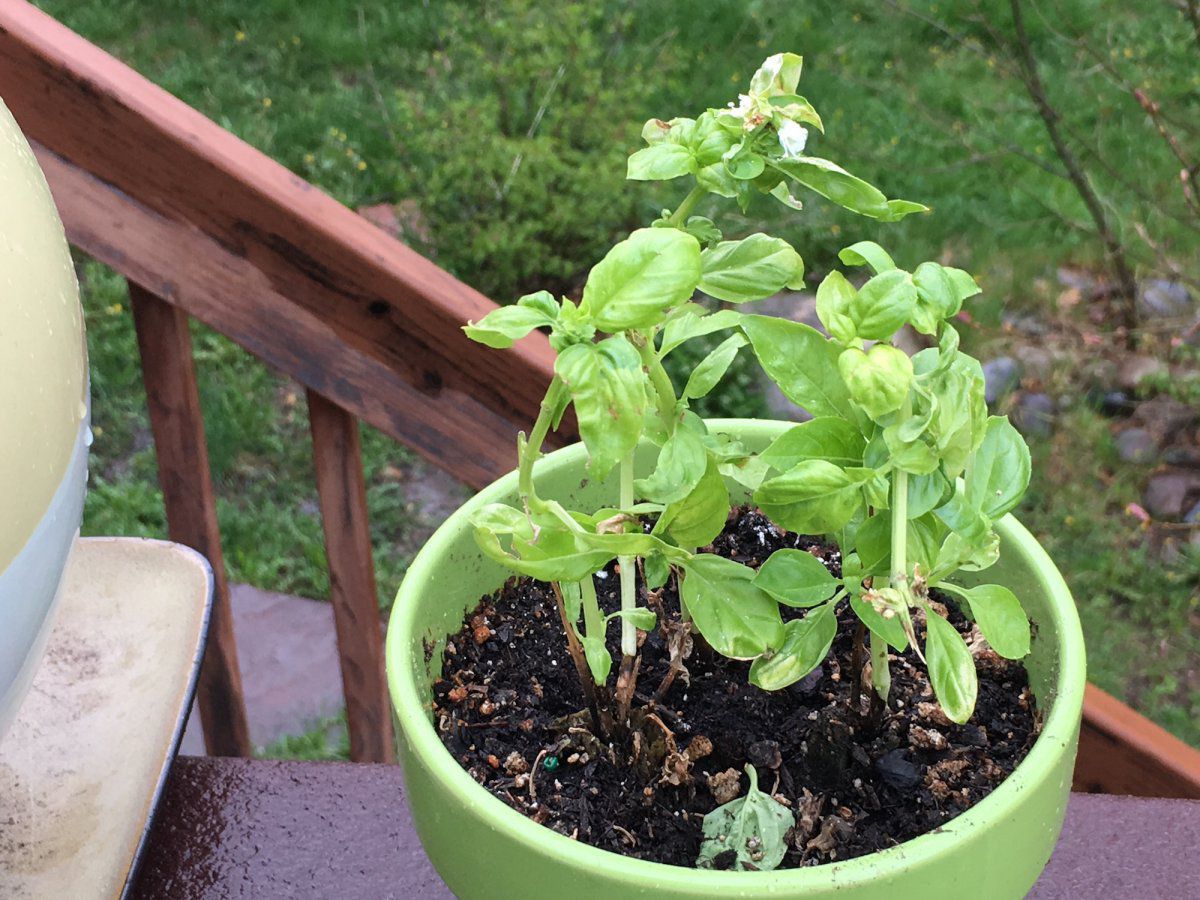 Pinch out those flower tips, or your basil will taste very different.
In the blue/beige planter, can you lift the basil plants, separate them, cut them back by about 1/2, and replant some in that planter and the rest in another, separating the plants as much as possible?
Here is a link on how to cut/harvest basil. Go to step 2 which shows where to cut.
http://www.instructables.com/id/Harvesting-Basil/

I’d give it a shot of nitrogen. I’ve kicked basil plants from dormant into high gear with it a few times.
Ad

Soil seems quite dark, possible over-watering. Some leaves look malformed, there are discolorations and bumps on others - probably some aphids, hopefully no viruses. If these are well established plants, you may cut them short, spray them with neam oil or insecticidal soap and keep them in the sun for some time to dry them out and energize them a bit.