Animals in your garden

'arry is still chomping through his 85grms of Sheba cat food, every night.
I'd bought two different varieties of hedgehog pellets and mixed in with some dried mealworms as additional food, but he didn't like either of them. But he does like the meal worms. You're not s'pposed to give them too many.
So a couple of days ago, I bought him some "Spikes slightly moist hedgehog pellets," from "Pets at Home" for £4.99 and gave him some mixed in with the mealworms.
He fished out the mealworms and left the pellets.
Ad

'arry must be a clever hedgehog.

Whilst 'arry was eating his dinner tonight, I had a check on his house.

He's been making some alterations since I started occasionally leaving small handfulls of straw by his front door.
He's obviously looking for material as he's brought in a giant lily leaf. He's creating a bit of a tunnel from the inner door and there's a nice bowl of straw, where he sleeps, difficult to see the depth in this photo. Although the lid has a roofing felt covering, I've noticed there appears to be evidence of the beginnings of a bit of damp under it at the far end. But the inside seems nice and dry.

I think I've some plywood in the shed and a bit of spare roofing felt.
So I can make an oversize false roof for it and just sit it on top asnd put a brick on it.. 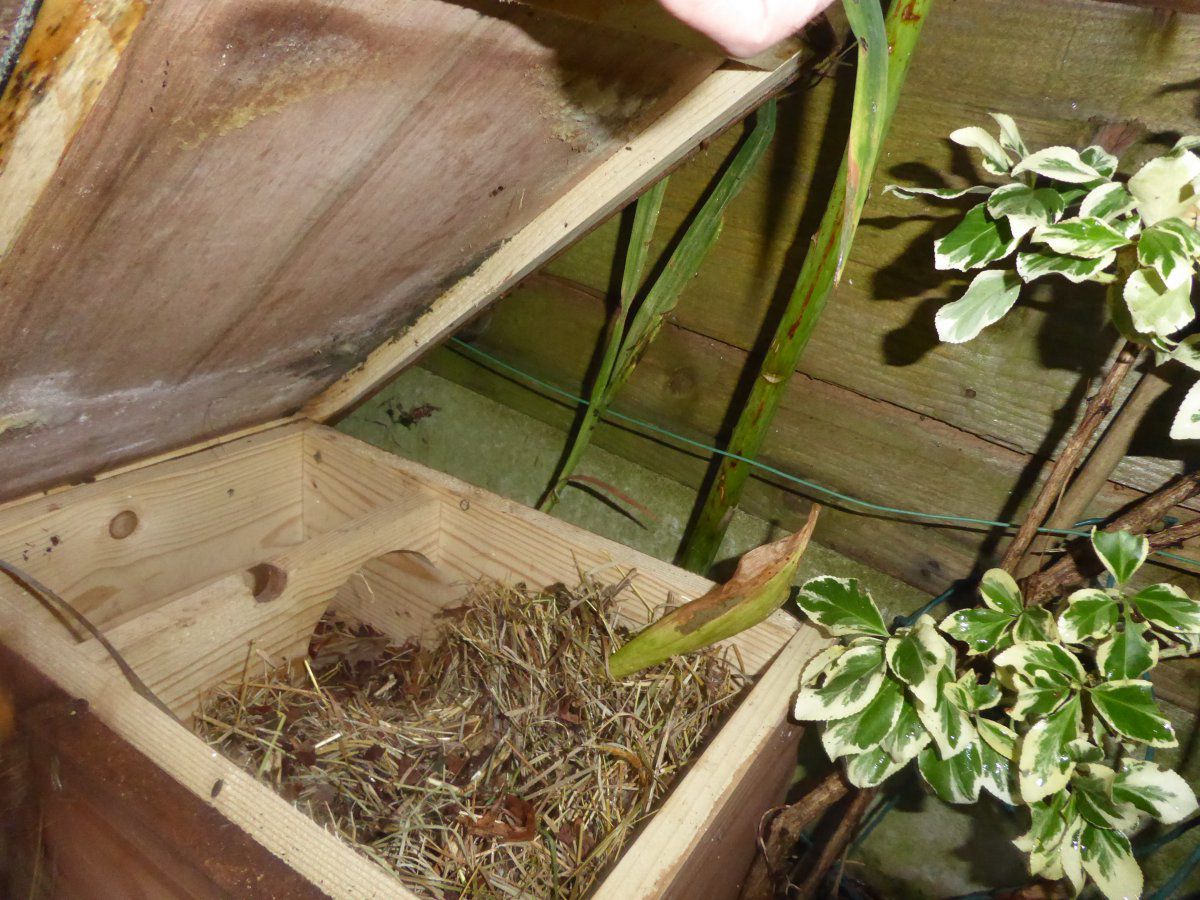 He must be getting ready for the winter months.
O

There is a hole in the hedge either side of the garden and a worn pathway in the grass across it. We have wondered what made it and I even looked at the price of cameras when 'Arry started becoming a screen star, but decided it was prohibitive. Last night we were sitting having dinner in the back room, coming up dusk, when a badger crossed the garden using the path. Not just any old badger though, he was huge, the biggest brock I have ever seen, made the missus literally jump out of her chair. No wonder there are times when Our little cat just doesn't want to go out of the door. There is a plum tree one end of the run and we had noticed that something was eating all the fallen ones, we even started dropping the iffy ones rather than put them in the compost. I reckon that may have been what brought him out a bit early.

“Kill two birds with one stone.”

loved .. its called real nature. i m crzyyy after seeing this
Ad

Chris Packham has a 'Fox of the day' feature on his twitter account, some lovely looking foxes, a lot of them in very suburban gardens looking totally relaxed, like the vixen feeding cubs on the lawn.

Oliver Buckle said:
Chris Packham has a 'Fox of the day' feature on his twitter account, some lovely looking foxes, a lot of them in very suburban gardens looking totally relaxed, like the vixen feeding cubs on the lawn.
Click to expand... 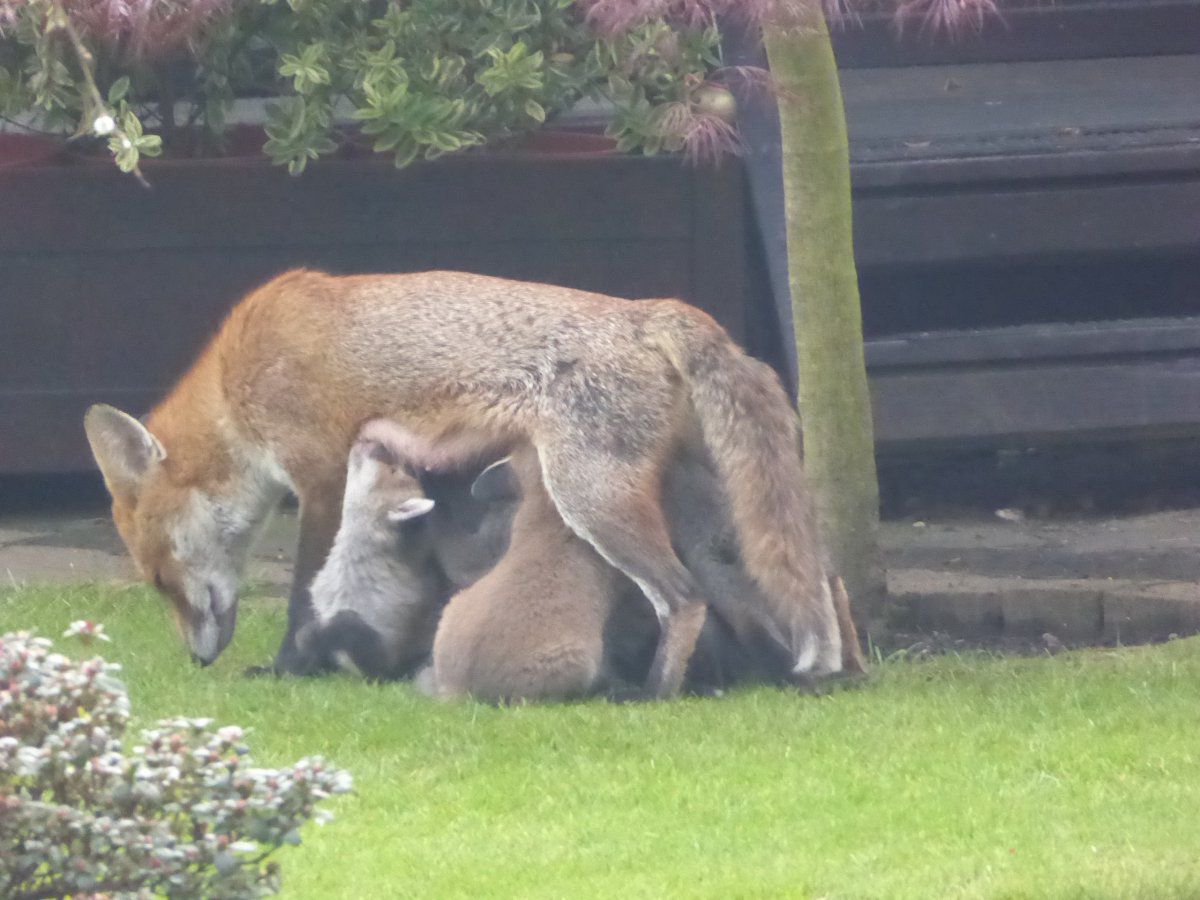 You are not the only one to name your fox, there was one called David Bowie the other day. There was one lying down next to the bench where the garden owner was sitting.

I was prepping a bed the other day and there were some big lumps in one corner. I turned them out so I could break them up and underneath was a female slow worm looking pretty dozy. I carefully covered her back up again, love those slug eaters.

I keep forgetting slow worm is another name for a legless lizard. Yep...would love it if some turned up here but even in good habitat encounters are few.

I have 3 cats of my own, but this little cutie pops up to see me and say Hello. More importantly have a few dreamies. Not sure who he belongs to but he is adorable. I call him Mr Pickles. 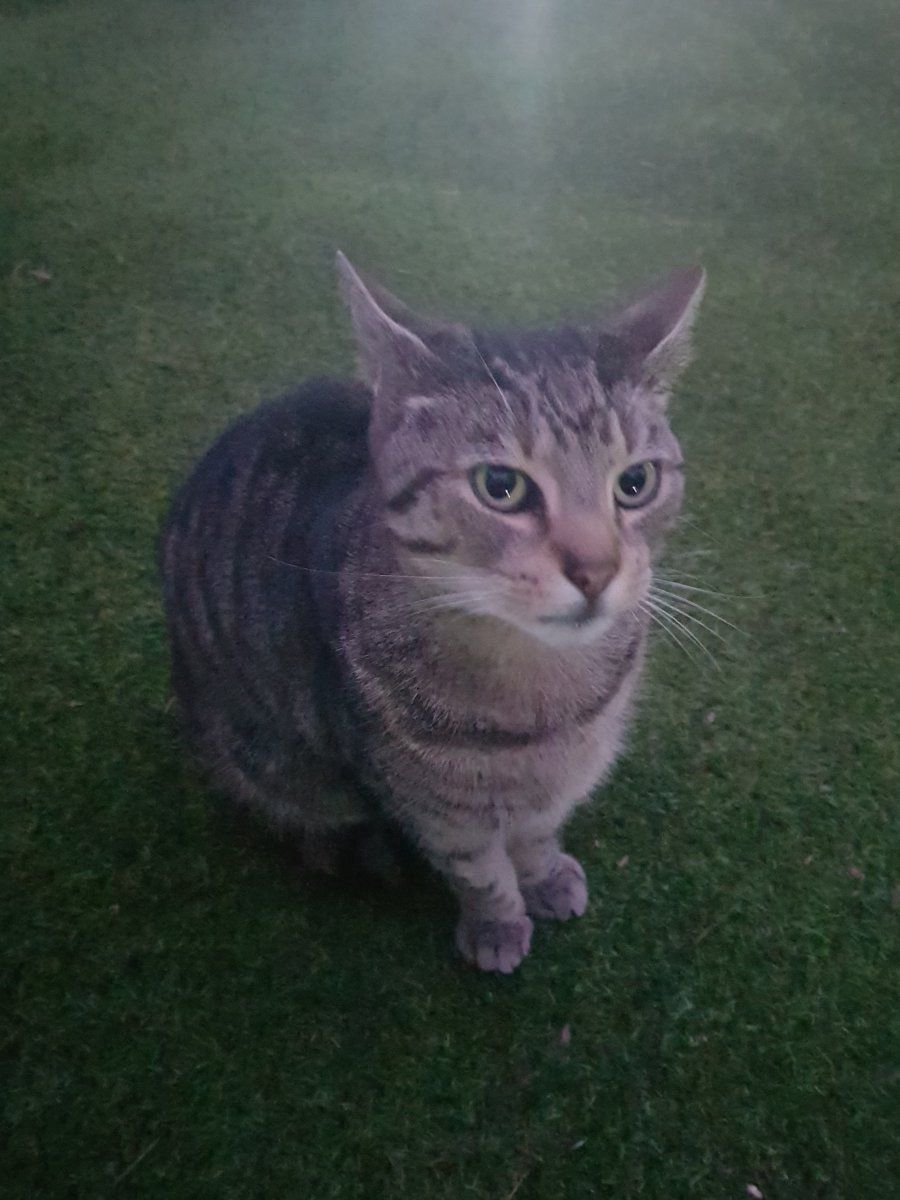 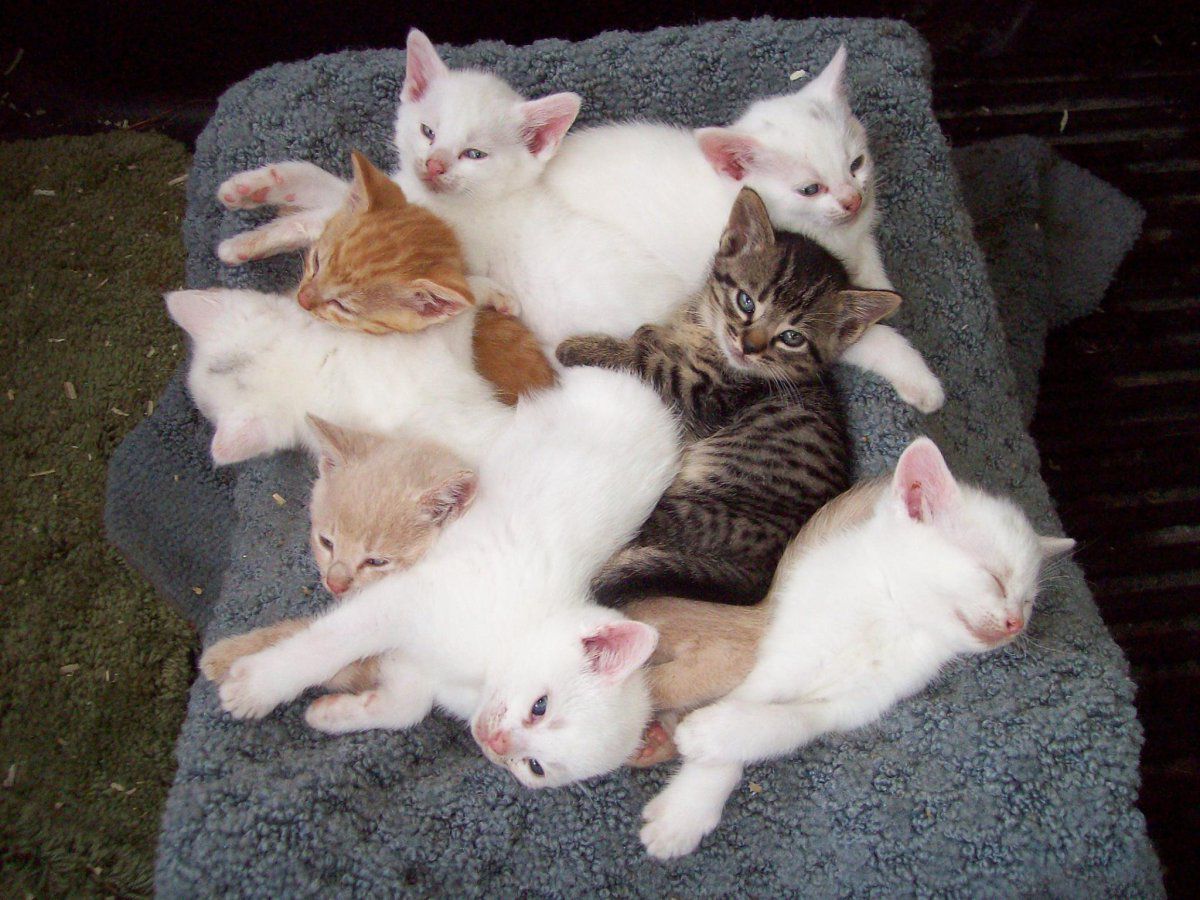 Clearing a patch of weed the other day and a baby toad about and inch an a half long hopped out of it.
O

I have a houseplant in the greenhouse I was given. a clivia. It is next to the back of the potting tray and the idea was to bring it in and have it bloom. Plan on hold; whilst working at the potting tray I kept getting 'buzzed' by a small bee, then I spotted it vanishing into a hole in the earth at the edge of the clivia pot. It's pretty regular, and seems to have got a bit used to me. When the door is open it flies straight in through it, but has problems getting out, flying around the panes. It is an old and leaky greenhouse though so it gets out.

Please excuse the quality of the image but I had to grab my camera quickly before they disappeared through the fence. Red deer. 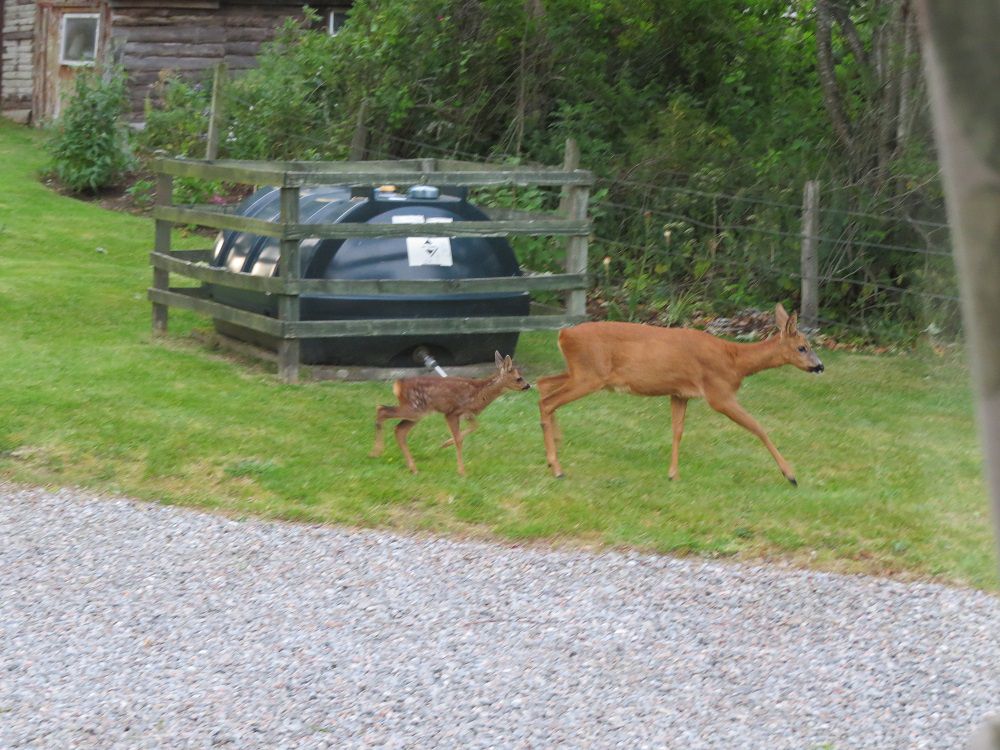 Digging out potatoes the other day and suddenly noticed a movement, a toad backing into a hollow. I left it to him and the robin for a bit and he was gone when I came back, the robin showed again instantly. When I was raking over the other day he came and sat on the rake handle for a good view, bold as brass.
Ad

Eating breakfast and looking out the window I saw something quite large visiting the salvia flowers and hovering. I went out for a closer look and it was a humming bird hawk moth, a rare treat.

Oliver Buckle said:
Eating breakfast and looking out the window I saw something quite large visiting the salvia flowers and hovering. I went out for a closer look and it was a humming bird hawk moth, a rare treat.
Click to expand...

She was just seeing if your garden was worth eating before laying her eggs which turn into hornworm caterpillars.

Just a few sparrows, pigeons and seagulls walking around my lawn, sometimes helping themselves to the pear trees, and the occasional neighbor's cat.
Ad

Chilli_Choco said:
Just a few sparrows, pigeons and seagulls walking around my lawn, sometimes helping themselves to the pear trees, and the occasional neighbor's cat.
Click to expand...

Tough birds round your way... Helping themselves to the occasional neighbor's cat.

Actually we get jackdaws, and our cat was only small. If they were both out there at the same time they both pretended they hadn't noticed each other.