http://durgan.org/2017/July%202017/22%20July%202017%20Indigo%20Ruby%20Tomato/HTML/ 22 July 2017 Indigo Ruby Tomato
This unique tomato is producing fruit which is in the growing stage not yet ripe. At first glance they look like eggplant with a jet shiny black color at the portion exposed to Sun and perfectly spherical. The underside not exposed to Sun is still green. Closely related to Indigo Rose Tomato.

http://extension.oregonstate.edu/gardening/purple-tomato-debuts-indigo-rose Indigo Rose
The Indigo tomatoes will be purple where exposed to light and they tend to have a purple to black crown. They are ripe when their color changes from a shiny blue-purple to a dull purple-brown. The fruit also softens similarly to regular tomatoes, and the bottom of the tomatoes will turn from green to red when ripe. 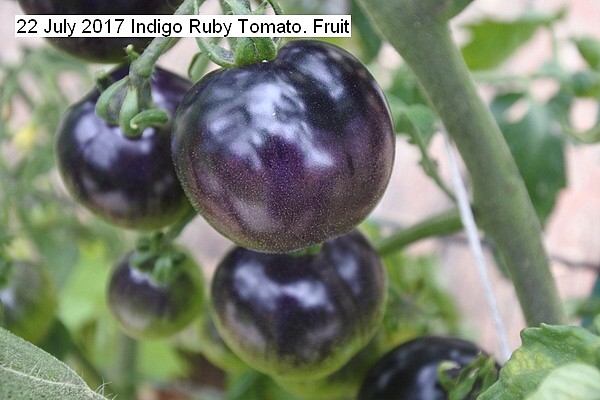 I bought some indigo rose seeds, but then learned that the flavour wasn't great, so didn't sow them.
Would you give a critique of the flavour, as, if what I read was wrong, they'll still be viable for next year?

This is a lousy year for tomatoes. It has been generally cold and many of my green tomatoes have cat face due to poor pollination. It I almost the end of July and there has not been the normal hot and sunny weather.The indigo are still very hard being decidedly unripe.
H

Durgan said:
This is a lousy year for tomatoes. It has been generally cold and many of my green tomatoes have cat face due to poor pollination. It I almost the end of July and there has not been the normal hot and sunny weather.The indigo are still very hard being decidedly unripe.
Click to expand...

Sounds like six out of seven Cheshire summers.
It's more work, quite a lot more work, but ever thought of growing single-stem indeterminate tomatoes?
I believe you'd definitely get a larger (overall) harvest & it would be easily possible, with the support system you use, to cover them with cloth or insect-netting, to temper the hot sunshine when it does come.
I'm having (so far) that seventh summer where it looks like I may be inundated with tomatoes.

PS, it's amazing how many people, other than climate scientists, are telling us it's cooler than usual.

I only grow indeterminate. I tried some determinate and found the few to be undesirable in general.

I only had one complete bust in the last ten years. August is really our tomato month. In my area seldom is the Sun ever too hot. Drought , yes, but I can cope with that. With gardening it is always a good idea to keep Pandora's Box handy.
Ad

15 August 2017 Indigo Ruby Tomato Beginning to ripen
http://durgan.org/2017/August%202017/15%20August%202017%20Indigo%20Ruby%20Tomato/HTML/ 15 August 2017 Indigo Ruby Tomato
Ripe when the bottom of the fruit turns red. This is away from the Sun direction. The plant is prolific, and the fruit is perfect with no blemishes. The taste of the fruit is pleasant. Size is about golf ball dimensions. A bowl would be attractive at a dinner setting. 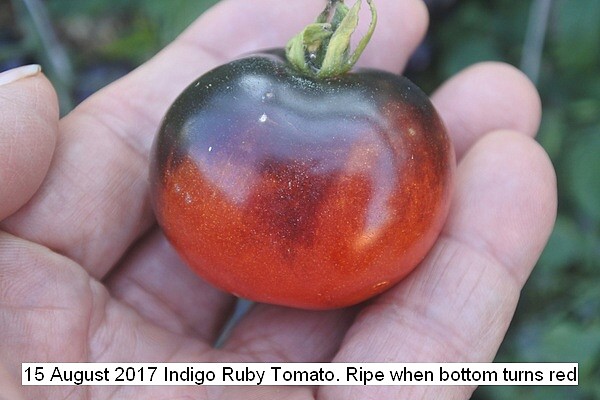