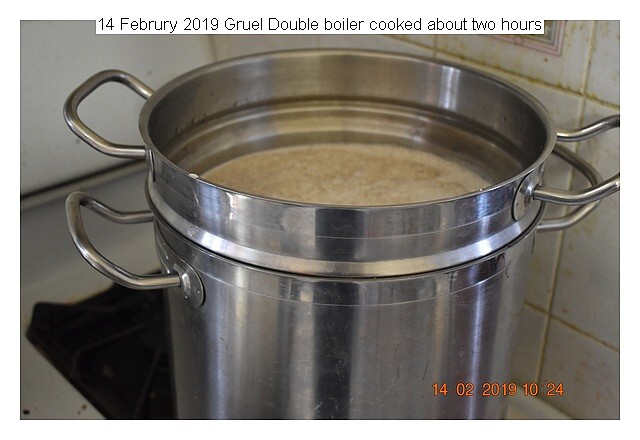 Sorry, but I just couldn't live on that.
I'm having steak in pepper sauce, new potatoes and home-grown French beans for dinner.

headfullofbees said:
Sorry, but I just couldn't live on that.
I'm having steak in pepper sauce, new potatoes and home-grown French beans for dinner.
Click to expand...

That is breakfast. It gets me away from the bacon and eggs which is pretty well ubiquitous in NA.

Durgan said:
That is breakfast. It gets me away from the bacon and eggs which is pretty well ubiquitous in NA.
Click to expand...

Never had vegetable sausages. It is almost impossible to buy good sausages anymore. Most I have seen use processed meat for the filler like spam. Also the write up on the internet are not too complementary with vegetable sausages.

Sounds interesting to me. I'm a big fan of grits and also hominy and raise a lot of corn in my gardens.

Would you mind describing your "nixtamalized " process?
Ad

Apparently corn if a main diet causes disease. Meaning the nutrients are not utilized by the body. I am talking about dried field corn. Native South Americans used wood ash to soak the corn and release nutrients. White man was too stupid and avoided this step hence disease (pellagra) where corn was imported and became the staple. It became black slave food.

Primary pellagra is most common in developing countries that depend on corn as a staple food. Corn contains niacytin, a form of niacin that humans can’t digest and absorb unless prepared properly. Pickling lime is used to soak field corn for a few days. The pickling lime is actually calcium hydroxide. It is often used to make cucumbers crisp by adding to the picking process. The process of soaking the corn kernels is called nixtamalization. I have a Mexican friend who clued me in about the process and now I grow Indian corn , colored, and when eating the corn I nixtamalize it and dry to use in my gruel. Few people now use dried corn.It is usually animal feed now but it has many nutrients. Corn is almost in everything we now eat. There are acres and acres of corn around where I live. Some researchers blame corn syrup for our excessive consumption of sugar ad point to the obesity figures. Corn syrup is cheaper than cane and beet sugar and is often used as a manufacturing sugar in drinks, etc.

http://durgan.org/2017/October 2017/31 October 2017 Nixtamalization/HTML/31 October 2017 Nixtamalization
Nixtamalization is soaking the corn kernels in calcium hydroxide for 24 hours. I use colored Indian corn, since I grow it. About three liters of corn mixed with three large tablespoons of calcium powder. I use Mrs. Wages pickling lime. Bring to a boil then turn down the heat and let soak, stir occasionally for 24 hours. The nixtamalized corn is then dehydrated for storage. It is used as one of the grains for my gruel. 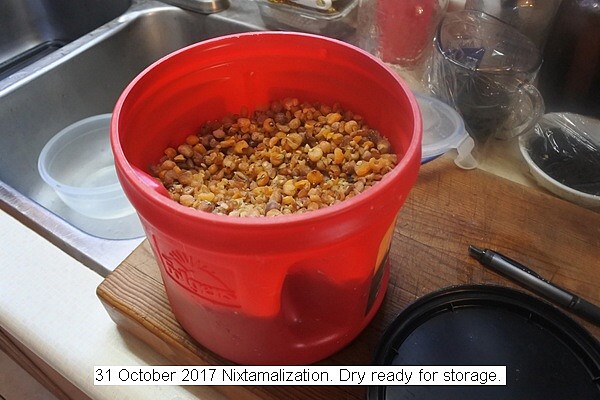